For some thinkers, that ol' international communist conspiracy will never die. 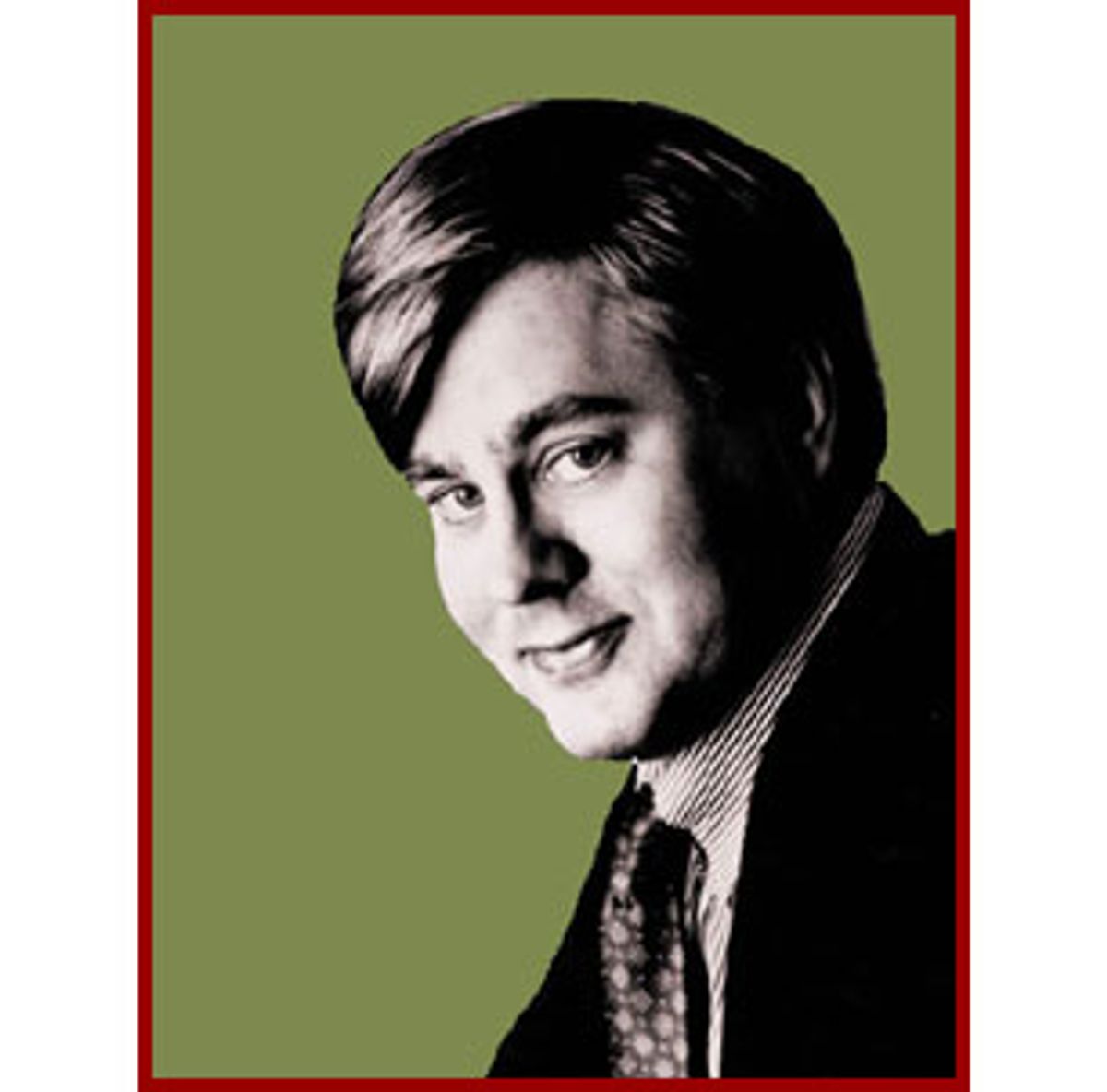 I guess it's too much to ask that every American just bite the bullet and admit we lost the Vietnam War, because here comes Harper's Washington editor Michael Lind with yet another of the "if only" books about Vietnam. Is it still possible that a writer can blather on and on about an international communist conspiracy in 1999 without having to go to a survivalist press in Bumfuck, Idaho, to get the book published? Apparently so.

Lind is one of the bad boys of the Beltway. Like Christopher Hitchens, Maureen Dowd and Matt Drudge, he'd rather get off a good line than make a complex, well-reasoned argument. Now 32, he has lurched from one side of the political spectrum to the other and back again. As an undergraduate at the University of Texas, he considered himself a liberal Democrat, but in graduate school at Yale he solicited money from William F. Buckley for a campus magazine. Stints at the right-wing Heritage Foundation and assignments for the left-leaning magazine Dissent and the New York Review of Books followed. A polemicist by nature, he once told the Los Angeles Times, "One side is right and one side is wrong. You can't fraternize with the enemy. You have to drive them out of public life."

To give Lind his due (which he rarely gives anybody else), his new book, "Vietnam: The Necessary War," takes off from a breathtakingly plausible assertion: "The United States fought the war in Vietnam because of geopolitics and forfeited the war because of domestic politics." Hard as it is to find any statement about Vietnam that reflects enough agreement between the still-warring hawks and doves to be accepted as a fact, this might be one.

Lind points to the current consensus on the war -- that it was a mistake to intervene in Vietnam at all, but that once the United States did, we should have used unlimited force to quickly win -- and finds it misguided. Vietnam, he argues, was no aberration (as many Americans would still like to believe) but one of a series of limited wars, like those in Korea and the Balkans, that we have fought to protect our interests.

But Lind quickly falls into the good guys/bad guys reductionism that polemicists find so bracing. The United States had to fight in Vietnam, he argues, because we were facing a communist bloc that sought to crush us and rule the world; the South Vietnamese were our proxies and the North Vietnamese were the puppets of the communist bloc. It's that pesky domino theory again, this time dressed up in a new metaphor, "bandwagoning." Lind sees international power politics as a matter of lesser powers jumping on the "bandwagon" piloted by whichever superpower seems to be dominant at any given time; thus, if the United States hadn't intervened in South Vietnam, everyone would have jumped on the communist "bandwagon." (This unfortunate metaphor conjures up a kind of Metternichian musical comedy set to tunes from "The Music Man." Dominoes is better: You can imagine a tense game, staged ` la "The Seventh Seal," with Stalin playing Lind for world domination.)

What if the United States hadn't intervened in Vietnam? What if the course of world politics wasn't entirely attributable to Cold War machinations? What if the global anti-colonial struggles of the period -- which Lind never mentions -- or the economic and social upheavals in various countries also came into play? Why is what happened in Vietnam, Cambodia and Laos so different? What about the internecine struggles between the two most powerful members of the communist bloc, Russia and China? What about Afghanistan, where the Russians failed to take over? None of these complicated scenarios fit into Lind's Cold War cartoon of the world.

Lind gleefully (and justly) skewers the American anti-war movement for its romantic fantasies about Uncle Ho and the National Liberation Front. But he never mentions how wrong conservatives were about our South Vietnamese allies, how unwinnable the war was or how extensive the civilian casualties of American bombing were. (And he trots out an old anti-Semitic prejudice about the left when he declares that "apart from Jews, few American students in the sixties were radical.")

But it's when he tries to analyze Indochinese politics that his sheer blazing ignorance comes out in full force. To pigeonhole the Vietnamese, southern or northern, communist or anti-communist, as simple pawns smacks of the kind of dismissive racism that did so much to help the United States lose the war. Independence from colonial control was the passion that drove the Vietnamese, whether they were anti-communists, pro-communists or part of the historically significant third force that fought both American and communist domination --which Lind doesn't even mention.

Lind's ideological prejudices are so distorting that he fires off some real whoppers. For years it was rumored that 50,000 Vietnam veterans had committed suicide after the war; Lind gives the number as 500,000. (Several years ago I did my own investigation and found out there was no proof for any number.) Gareth Porter, the scholar who argued that U.S. bombing was responsible for Khmer Rouge atrocities, was in fact the only researcher who held this view; he wasn't, as Lind implies, at all representative of anti-war thinkers. More refugees were not created in communist Vietnam after the war, as Lind claims, than at any previous time; during the war, American bombing and the fighting on both sides created more than a million refugees. All communist regimes are not, as Lind believes, alike; it's absurd to equate the countless victims of Khmer Rouge genocide and of Maoism and Stalinism with the far fewer victims of Vietnamese land reform.

But then Lind gets his information on Vietnamese (and Russian) politics almost solely from defectors, who, with their special hatred and the angry sense of betrayal they carry into exile, are notoriously unstable and unreliable sources. Doan Van Thoi, a darling of the far right and Lind's main source, drew some headlines in the late '70s by convincing Joan Baez that the Vietnamese communists had slaughtered millions of victims after they took over in 1975. No Western journalist who stayed on after the takeover, nor any reputable historian since, has found evidence of such a bloodbath. And the newly opened Soviet archives, which Lind depends on heavily, are a dubious source of information about Russian intentions and actions: Like FBI files and the Pentagon Papers, they're rife with raw misinformation and wishful thinking.

But the most bizarre of Lind's ideas is his concept of "losing well." He argues that by withdrawing from Vietnam in 1969, President Nixon could have sustained Americans' support for the Cold War -- but Lind never explains why withdrawing five years earlier wouldn't have caused everyone to jump off the American "bandwagon." In a breathtakingly cynical analysis of casualties and the "worth" of the United States' intervention in Vietnam, he writes, "A war to defend a great power's military credibility might be compared to an art auction, which is, among other things, a competition among the rich for prestige." In his view, the fact that you stop bidding (or fighting) at a certain level doesn't mean that the painting (or the war) wasn't worth investing in initially -- just that you've reached your budget's limit. Needless to say, there isn't a hint of the cost in human lives in Lind's flashy cost-benefit computations.

Now that it's possible to travel and pursue research in Vietnam and Russia (if not yet in China), it may finally be possible for a historian with a keen, compassionate intelligence to write a solid history of the war, taking into consideration who did what, when and why. "Vietnam, the Necessary War" isn't even a shadow of that book.

Judith Coburn has covered war and its aftermath in Indochina, Central America, and the Middle East for the Village Voice, Mother Jones, the Los Angeles Times, and Tomdispatch, among other media outlets.