Will you free the residents of Omikron's totalitarian regime or lose yourself in the beauty of this game's futuristic city? 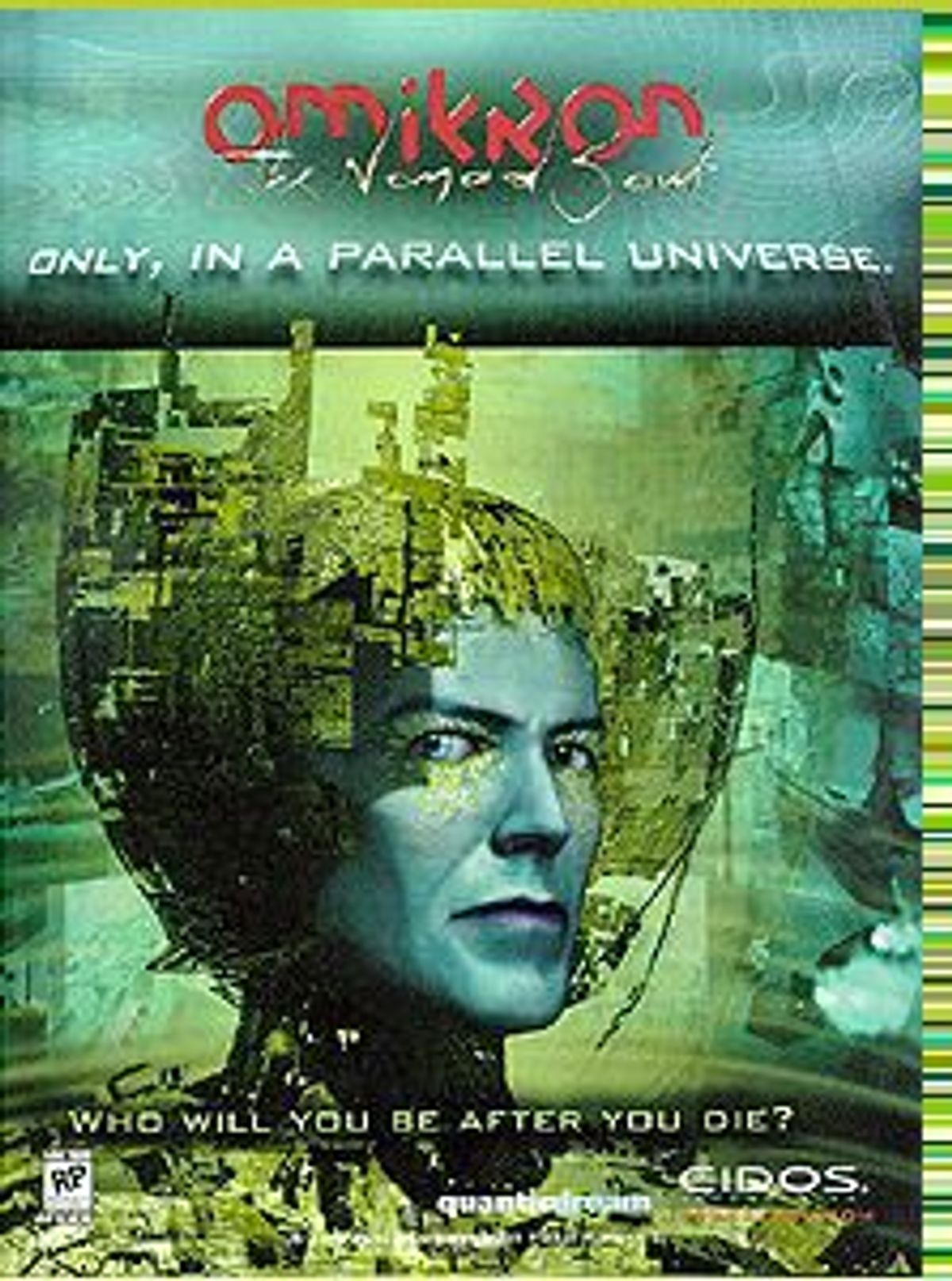 The residents of Omikron have truly been given the short end of the stick. Not only are they living under a glass dome on an otherwise frozen planet, but they are victims of a totalitarian government that carefully moderates and whitewashes everything from the media to the weather to when they can get pregnant. To make matters worse, the totalitarian government is, in turn, controlled by an omniscient supercomputer named Ix that makes all its decisions based on statistics. And to top it all off, that computer is merely the tool of a very nasty soul-sucking demon, called Astaroth.

Of course, since this is a video game, it's your duty to free the residents of Omikron from these multilayered oppressions and bring freedom and individuality back to these embattled people. Just don't let your soul get sucked, or you'll never return.

Welcome to Omikron: The Nomad Soul, perhaps the most ambitious, absorbing and utterly complicated adventure game to hit a PC. Developed by the French video game company Quantic Dream, and produced with the help of Eidos Interactive and David Bowie, Omikron: The Nomad Soul is one part sci-fi wonderland and one part action-adventure challenge, with a healthy dose of postmodern commentary to boot.

As the game opens, a man who calls himself Kay'l stumbles onto your screen and begs you to help save his world, by transferring your soul into his body and heading back to the world of Omikron. If you accept (which is your only option, of course), you are dumped -- dazed and confused -- into a back alley in Omikron. Your task is to figure out where you are, why you are there and who Kay'l was, while fighting off a few hundred demons, thieves and robots along the way.

Initially, you are given few clues to these mysteries, other than a hint that you should visit Kay'l's apartment. The rest you'll figure out along the way, as each place you visit points you toward your next interaction. In Kayl's apartment, for example, you'll find the Koopie lizard, which brings you a hidden key if you feed it Koopie food; the key you'll later use to unlock a box, which will give you a message telling you where to look next. Or you'll visit the Security Administration, where Kay'l works as a policeman, and talk to your fellow co-workers about the cases Kay'l was working on before he left. Fliers you find on tables in the bars will lead you to concerts, competitions and yet more clues to the unfolding mysteries of Omikron.

If you aren't quick on the uptake, you could easily spend hours upon hours wandering aimlessly without a clue. There were moments when I definitely wished for a good cheat sheet. Fortunately, you can buy advice, if you've been wise enough to save up on magic rings -- although the advice offered is often as vague as the clues. (I was lucky enough to have a direct line to one of the game's designers, a rather sneaky but useful way to solve some of the game's trickier puzzles.) It's not a game for the easily frustrated, although it's easier than, say, Myst.

But even getting stuck without a clue in Omikron isn't the worst fate: Although this is, at heart, a linear game, it's possible to hang out in Omikron for hours without sticking to the story line. You can shop at the stores, eat some Pureed Cramen or sip a Quanta Cola, visit a strip club to watch a little erotic dancing or head down to the Sha'armet Tournament, where you can practice your fighting and shooting skills to win some cash. Or you can just wander endlessly and talk to all the people you meet, many of whom will reveal tidbits about the incredibly complex customs and mythology of this world.

And to top it all off, you can switch characters whenever you want -- essentially, as the game puts it, "transferring your soul into a new body." Besides Kay'l, a policeman who looks like he stepped straight out of a new wave band, there's Syao, a sexy jewel thief in a black cat-suit, and Plume, a fashion designer who wears some kind of hideous fur across her shoulders, plus a host of others. All across Omikron you'll meet metal-faced fighters, exotic dancers and playboys whose bodies you can snatch if you chant the correct spell.

Omikron easily stands among the most engrossing and well-conceived virtual worlds that I've come across in a game. The creators have provided 3 CD-ROMs' worth of graphics and at least 50 hours of available gameplay, enough to kill your productivity for weeks. Not only is it artistically beautiful, it's mind-bogglingly detailed.

Omikron is a huge futuristic city, very "Blade Runner"-meets-Moebius, with a whiff of Middle Eastern exoticism. There are four sectors of the city -- the grim police district of Anekbah, the tawdry red-light district of Qalisar, sunny residental Jaunpur, and Lahoreh, glitzy home to Omikron's jet set. It's obvious that the designers behind this game are extraordinary artists in the graphic-novel tradition, and the attention to detail is amazing. There must be thousands of unique characters wandering around this world, each with their own features, fashion and personalities.

It's also clear that the world of Omikron wasn't produced by the typical action-oriented gaming company; Quantic Dream is a group of Parisian artists and musicians, headed by David Cage, who came together specifically to create this game. They turned to Eidos Interactive, the British gaming company that brought us Tomb Raider, for design direction and support. For the soundtrack and additional character design, Quantic Dream snagged David Bowie. Bowie recorded hours of music for this game, writing eight full songs and 35 shorter pieces of ambient music. From the silly supermarket jingles to the plodding and ominous tunes that follow you through the streets of Anekbah, the soundtrack is evocative, perfect for the game's mood. The songs, although written for the game, also appear in modified version on Bowie's latest album, "Hours," which was released simultaneously with the game.

Bowie also lends his appearance to two critical characters in Omikron -- giving the chameleon-like artist a chance to undergo not one, but two reinventions within one game. The first character is a "virtual" being named Boz whose soul is trapped inside the Omikron Internet (called Multiplan); he serves as the ethereal leader of a resistance group called the Awakened, which is fighting the totalitarian government. The other is a depressed-looking singer, clad in skin-tight tights and looking exactly like a young David Bowie, who heads up an underground band called the Dreamers. At several points in the game, you'll happen across their concerts, where you can sit for a few minutes and watch a digital Bowie lip-sync along to a real Bowie song.

While the Dreamers sing about freedom and "angels of promise," the world of Omikron represents a grim vision of a potential totalitarian future. Buried within the game are commentaries on government control, religious brainwashing, advertising, sports and technology. News, as seen on the Transcan -- Omikron's version of a holographic television -- is riddled with spoofs of our contemporary society. But the ultimate conceit of Omikron is that it's not a game -- it's a real world, parallel to ours, that you are trapped in.

"You mean Omikron isn't just a game?" you're forced to ask an evil policeman at one point in the game. "A game? Do I look like a game?" he responds. "Everything you see around you is real! Your computer is just a gateway to our world. Your body is still in your world, but your soul has been here ever since you agreed to occupy Kay'l's body. You think you're safe behind your computer screen; you better think again."

This theme -- that the game isn't really a game -- comes up over and over again throughout the game, tying in with the plot. The lead singer of the Dreamers, for example, is apparently channeling music from your world, Earth (channeling, perhaps, Bowie himself?), and his herky-jerky dance style is a result of the physical pain of receiving those messages. It also seems that the video game is a ruse designed to lure innocuous gamers into Omikron, so that the meta-demon Astaroth can feed on fresh souls.

At moments, this conceit seems stretched a bit thin -- a game that's not a game at all? Computers used to lure you into a netherworld from which you'll never return? Suspension of disbelief notwithstanding, it occasionally seems rather self-referential and far-fetched.

Yet perhaps it's not so far-fetched after all. As those who've spent hours hunched over Quake or Myst or Everquest -- even Tetris -- can tell you, video games can certainly be soul-sucking creatures with the power to turn you into a twitchy, pasty-faced demon. "We'll trap your soul!" the creators of Omikron are winking at you. You might as well stop fighting it and start playing.