I enrolled in college at 41. I did not wear Tommy Hilfiger. Things unraveled. 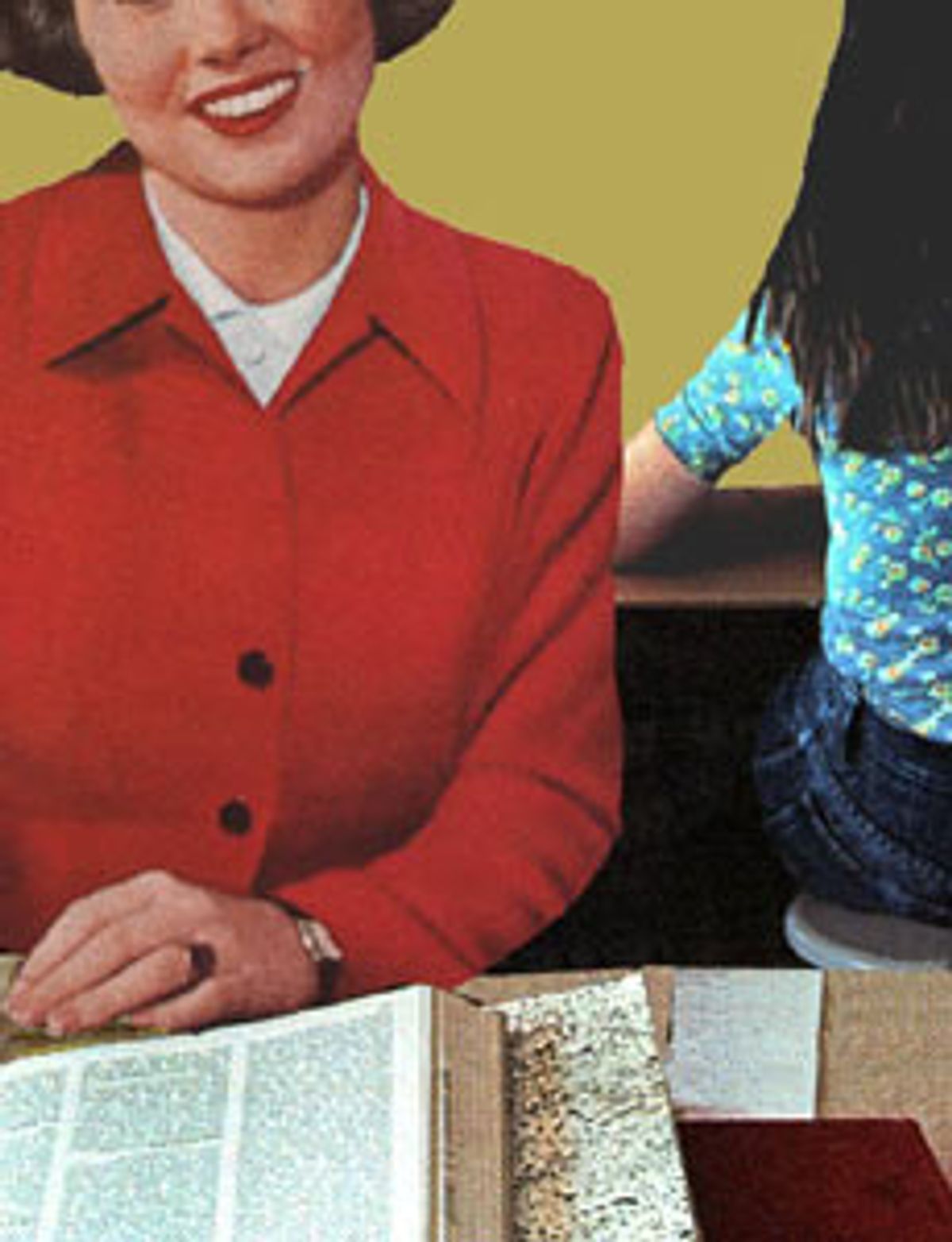 Aging is a strange thing. In the mirror I see nothing different
from what I've always seen, but a number of years ago, supermarket checkers
and other impertinents started calling me "ma'am." They think they're being
polite. I want to tweak their heads off.

The first thing I learned in my first college class was who I
am. Oh, in the abstract I know who that is, of course. I'm 41 years old,
married, childless, writer. I started working fresh out of high school and
have worked ever since. I talked about going to college eventually, but who
knew 23 years would elapse before I did? In fact, who knew 23 years would elapse at all?

For the most part, I have done a fine job avoiding any confrontation
with my age. Generally, I surround myself with a mirror of peers who reflect
back at me faces just like mine. By opting not to have children, I have
managed to avoid placing myself in the role of elder. I work at home, so I
don't have to deal with a workplace of fresh young things, as I did when I
worked at a newspaper. It's been five years since I left that job and I vividly remember the annual intern season. Those flocks of pretty
young people bubbling with naive enthusiasm always made me feel like Ed
Asner.

And so by exercising well-established avoidance techniques, I created
for myself a cozy delusion that I am, really, as young as I feel -- usually pretty young.

Then I started college.

Not just that, but signed up for daytime classes at a community college,
which probably makes the experience a lot more like high school than I
imagine a university would be. Community college feels like time travel back
to my Wonder Years. Couples cuddle in stairwells, kids cluster in hallways
comparing grades, classmates hurry to finish homework before
the teacher arrives.

Fashion accelerates the time warp. Schoolgirls today look a lot like they did in my
day, with long, straight, center-parted hair, big bell-bottom jeans and tiny,
shrunken T-shirts. At any moment I expect my best friend circa 1975 to pop
out of the girls' room and talk me into cutting class.

My first few weeks at college, I was confident, even cocky.
Sure, the kids surrounding me could tell I was no teenager, but certainly
they also saw my inherent coolness. I was not their mother, I was
them, only a little older. I wore the right bell-bottom jeans, the right
clunky shoes. I didn't, like one older student I saw -- older, even, than I --
wear T-shirts with sparkly big-eyed kitty cats on them. I knew better.

I was smug as only the young can be.

I was pleased to note that although most of my
classmates were not even fetuses the last time I sat in a classroom, I was
at least younger than the teacher, a genial gray-haired fellow with a grand
Texas belly that preceded him into the room. My delusion was maintained -- I
might be old, but I wasn't that old.

I made myself comfortable in the second row and was befriended by the
nice young man who sat next to me. He was older than the youngest in the
class, but nowhere near as old as me. I was flattered that he seemed to have
singled me out as the type of person a guy might want to sit next to in a
7:30 a.m. algebra class. Of course, I told myself. I'm not nearly as
decrepit as 41 sounds.

But one day, the teacher told a joke that inspired blank looks from the
class. He shrugged and explained he'd gotten it from an Archie comic.
Dead silence. "How many of you know who Archie Andrews is?" the teacher
asked. Mine was the only hand that went up.

He and I laughed and spun off a little riff, remembering the characters
together: Moose, Juggie, Mr. Weatherbee, Miss Grundy, Big Ethel. I was cool,
he was cool, we were cool.

Meanwhile, the nice young man next to me peered at the overhead lights
through the prism of his pink plastic triangle.

"What are you doing?" the teacher asked, a little peevishly.

"Nothing," the young man said. "I'm just not interested in what you're
talking about."

And with that, reality hit me in the face like a big, wet raspberry: To these little toots, I'm just an old fart. And as I sat there, fighting a blush, my delusion unraveled.

The right shoes? Who was I kidding -- mine were circa 1991 Dr. Martens. That would mean some of my classmates were in elementary school when I bought them. As for
the rest of my clothing, nowhere on my body did the words "Tommy" or
"Hilfiger" appear, nor "Old Navy" nor "Guess."

And look at me, carrying my schoolbooks not in a backpack, or a rolling
suitcase, as was becoming trendy, but in a tote bag. A tote bag. For god's sake, I might as well have crocheting in it. And I could pull ancient hard candies from my pocketbook for all the nice children.

I clearly had no idea how to comport myself in class. I had acquired
the idea that asking questions was a good thing; halfway into
the semester I realized I was the only one. I mentioned
this to my husband. "Oh yeah," he said, thinking back to his college days.
"There was one old lady in every class who always had a million questions."

Worse yet, I asked all the wrong questions. I asked "how?" and "why?"
and "what if?" instead of the one right question for
young college students in the know: "Will this be on the test?"

There I had it. The inescapable truth. You can put an old broad in
college but you can't make her young.

And so I invented a way to save face. I made myself invisible.

I try not to draw attention to myself. Whenever a question inspired by
mere curiosity bubbles to the surface, I bite my tongue. The ones I do ask no longer begin with "what if?" Even my teachers don't seem to care
for those questions. They just want to get on with things before the
attention of the rest of the class wanders.

Perhaps most important, I have given up that adolescent notion that
all the world is looking at me. Ever since Archie Andrews made a woman of
me, I cast aside all concern for the opinions of people younger than some
of my T-shirts. Instead, when I do look around, I notice that although
I'm still there -- sitting in classrooms, walking the halls, passing through
energy fields of raging hormones as schoolboy meets girl -- no one seems to
notice my old-school shoes, my Tommy-free fashion, my dork-deluxe tote bag.

To be honest, no one seems to notice me at all.

Sophia Dembling is a writer and student living in Dallas.