Buzz and Woody get warm and fuzzy in Pixar's terrific sequel. 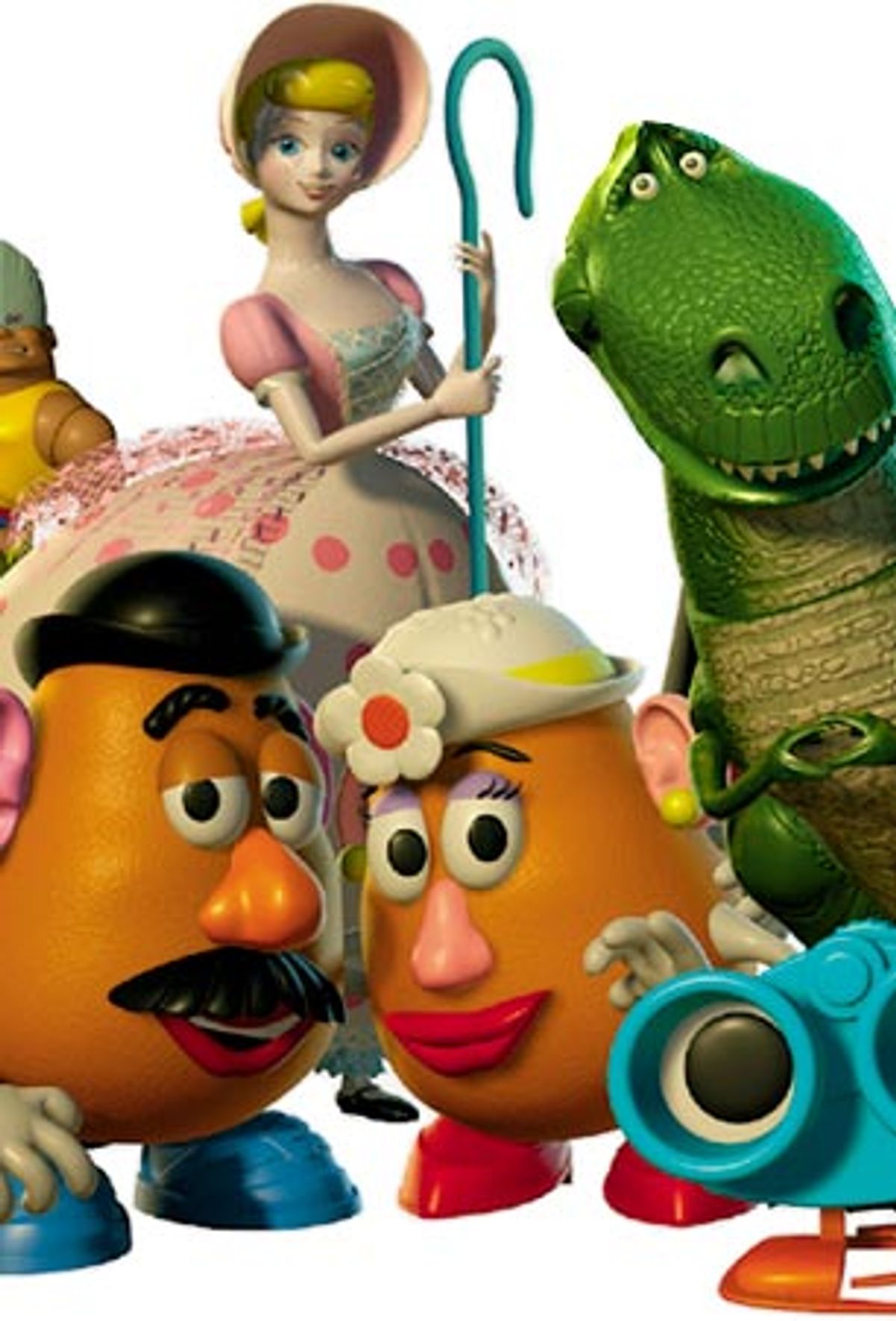 Think back to the toys of your youth: The worn out teddy-bears, the
Barbie dolls with their hair torn out, the discarded hot wheels and
erector sets and G.I. Joes and stuffed animals that eventually came
unstuffed. Now think about them in the bottom of a trash heap, or
mouldering forgotten in damp boxes in the basement -- your
dolls, dying terrible, cruel deaths by incineration, just because
you're more interested in nail polish and mortgages these days.
Feeling guilty yet? Hmm?

"Toy Story 2" is all about the brevity of life, learning to accept the
fact that you exist only as long as you are experiencing life to its
fullest. It is, believe it or not, a rather philosophical movie, in
which the topics of betrayal and death are pondered in toy terms. You
might even call it grim, despite its brave confrontation of life's
bitter truths. "We're all just a stitch away from here to there," one
toy says mournfully, as a broken squeaky toy is banished to a yard
sale.

It's been nearly four years since Pixar stunned the world with "Toy
Story," the first completely computer-animated full-length feature
film to hit the big screen. For those "Toy Story" fans who were
concerned that the film would suffer from the usual Death by Sequel
syndrome, I have good news: "Toy Story 2" is just as good as the
original. In fact, it might even be better. Not only is it just as
visually stunning and witty as the first, but it's funnier, more
thoughtful and more grown-up. It may not be as surprising as the
first time you saw "Toy Story," but it packs the same visceral punch.

The movie starts out where the first "Toy Story" left off: Buzz Lightyear and
Woody the cowboy are now best friends. Buzz has come to terms with
the fact that he is a toy rather than a superhero, and their beloved
owner Andy is about to jet off to cowboy camp with Woody in tow. But
when Andy accidentally tears Woody's arm during a particularly rough
playtime, Woody is exiled to the top of the bookshelf. "He's been
shelved," the toys whisper in fearful tones, and Woody seems doomed
to a dusty, forgotten fate.

The fun really begins when, after a complicated series of events, Woody is kidnapped by a
mercenary balding toy collector named Al McWhiggin. As it turns out, Woody is a collector's item, a
valuable relic from a television show of the 1950s called "Woody's
Roundup." Reunited with his "family" -- ditzy Jessie the cowgirl (Joan Cusack),
Bullseye the horse and the grumpy old Pete the Prospector (who sees
the world from behind plastic, as he's "mint, in the box! Never been
opened!") -- Woody seems destined to be sold to a Japanese museum to
live the rest of his life in a glass case.

Of course, the toys from Andy's house come to the rescue, braving
city traffic, toy stores and dizzying elevator rides in hopes of
returning Woody to his home. Want to take a guess if they succeed?

After watching three Pixar animated movies in the last few years --
"Toy Story," "A Bug's Life" and now "Toy Story 2" -- I can safely say that
Pixar's oeuvre has become somewhat formulaic. The movies have a
predictable plot (as most kid's movies do) involving an
against-the-odds battle of little critters vs. a few big bad
enemies, requiring innovative usage of oversized "real-world"
detritus (such as chinese food cartons, traffic cones and
skateboards). There's lots of visual situation comedy involving the
same, and enough innocuous sexual innuendo to keep the adults
chuckling.

But just because "Toy Story 2" is a bit predictable doesn't mean that
it's dull. After all, you don't go see "Toy Story 2" for the plot: You
go for the sweetly adorable characters, the giggles and the
breathtaking animation. And on all three counts, "Toy Story 2" serves
its audience with panache.

What makes Pixar's films consistently amazing is the animators'
ability to create characters with such depth of expression that they
seem real. (You'd never imagine that a plastic Barbie doll could be
so expressive!) It's less about the voices -- although the voices,
again featuring stars such as Tom Hanks, Tim Allen and Cusack, are
all notably done -- than it is about the visual punnery and dead-on
funny writing. Then there's the attention to tiny visual details,
from the nubbly quality of the old rug in Al's apartment to the
orange Cheetos powder on his fingers.

In one incredible scene, Woody is introduced to his past in Al's
apartment. As he gazes upon wall after wall of "Woody's Roundup"
memorabilia -- a yo-yo, coin bank, record player, plates, posters, a
Life magazine cover and even a breakfast cereal called "Cowboy
Crunchies," each decorated with his likeness -- the expression on his
face is heartbreaking. You can simply feel the wonderment and joy as
Woody gleans that he is not just any old toy, he's famous. The room
is suffused with a faded golden patina, the color of mint-condition
toys after 50 years on a shelf. "It's the color of epiphanies; even I, a jaded adult viewer,
got choked up."

At the heart of "Toy Story 2" is a lesson: Life is only worth living as
long as you are living it (which, in toy terms, means being
loved by a kid.) Toys are not, as collectors would believe, "for
display only" -- or worse, as nasty Al McWhiggin yearns, for profit.
They may live short lives, but when they are finally abandoned, torn
and broken, they will have essentially been loved to death. "How long
will it last?" scoffs the Prospector, as Woody attempts to escape his
museum fate and return to Andy's tough love. "Will he take you to
college, or on his honeymoon? You can go, or you can stay with us and
last forever."

A difficult choice for a toy -- a brief love affair with a boy who
will eventually rip him to shreds, or the fountain of eternal youth
behind museum glass. Sentimentalists, prepare your hankies.