Woody Harrelson brings his trademark touch of self-parody to the Broadway stage. 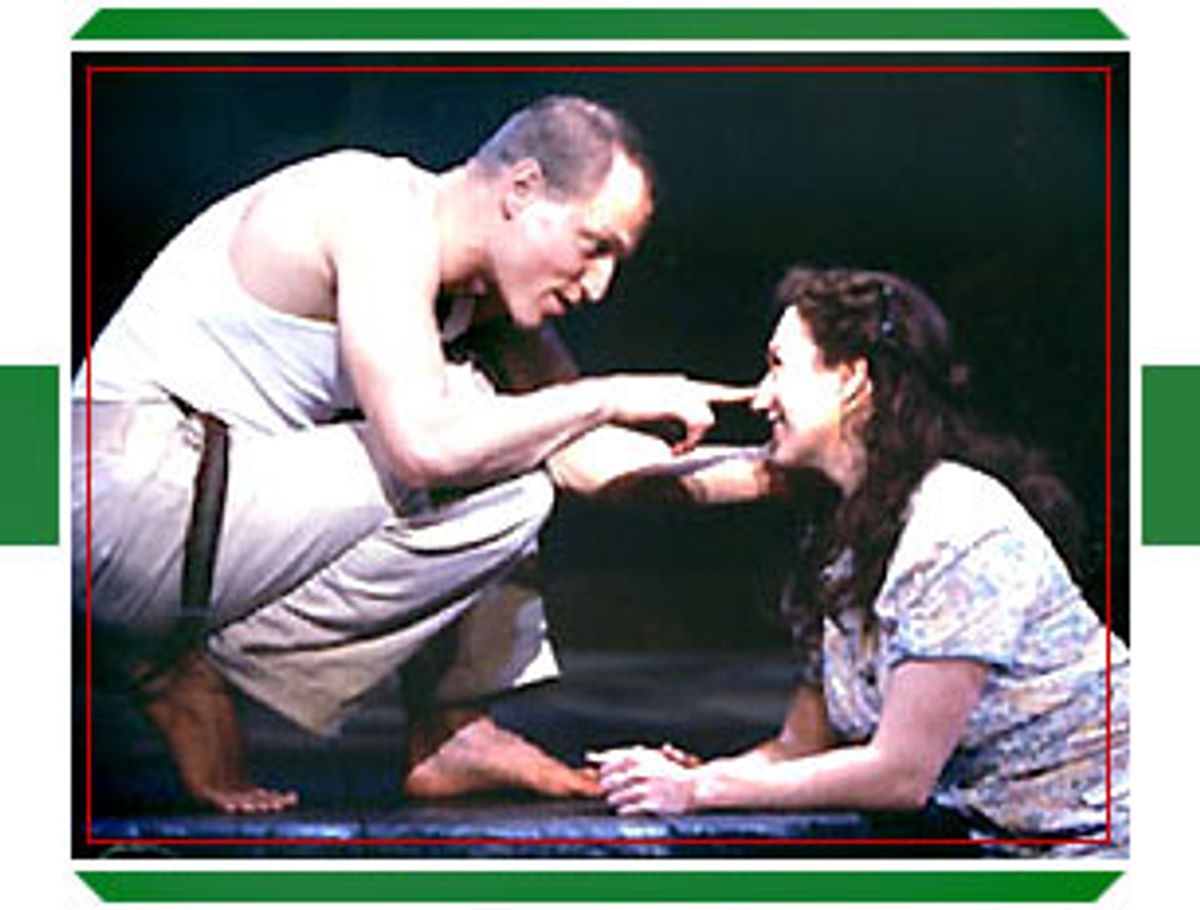 Woody Harrelson is ideally cast as Starbuck, the con man in love with his own
con, in the new Broadway revival of N. Richard Nash's "The Rainmaker." He brings
his trademark wised-up bumpkin presence to the role, his mad satyr's grin, his
unmistakable touch of self-parody. Scott Ellis' production for the Roundabout
Theatre Company (which premiered in a limited run at the Williamstown Theatre
Festival last year) is beautifully crafted and deeply pleasurable, but it's
Harrelson who brings it to life.

He needs to, because that's the way the play --
a 1954 hit now best known for the movie version starring Burt Lancaster and
Katharine Hepburn -- is constructed. It's set in a tiny, mid-Depression
Midwestern town whipped by a long drought; the drought is an emblem for the
female protagonist, Lizzie Curry (Jayne Atkinson), who's heading for
spinsterhood. Starbuck appears out of the windless night, claiming implausibly
that he can conjure up a storm for a hundred bucks, and puts an end to both dry
spells.

Nash's play is hokey and homiletic, and there's no music in the lines.
Starbuck corners Lizzie, pointing out the nervousness that, along with her
pragmatic dismissal of his boastfulness, conceals her sexual terror, and you long
for the poetic intensity that Nash's contemporary, Tennessee Williams, could imbue
a similar encounter with in a play like "The Eccentricities of a Nightingale."

Instead you have to settle for the usual brand of Broadway-drama speechmaking as
the characters tell glaringly obvious home truths about each other. They've been
drawn mostly to fulfill functions. Lizzie has a wise, loving father (Jerry
Hardin, in a sweet-natured performance) and two brothers who stand at opposite
ends of the spectrum: the elder, Noah (John Bedford Lloyd), the practical one,
who runs the farm and says things like "Drought's a drought, and a dream's a
dream," and the younger, Jim (the immensely likable David Aaron Baker), who's
driven by his hormones.

Sense-talking Noah continually tries to control Jim -- to
take him down a peg, to harness his youthful wildness -- but Starbuck champions
the boy, just as he fights for Lizzie when Noah tells her to face up to the fact
that she's doomed to be an old maid. Lloyd gives a believable performance in a
bummer of a role -- a man whose confidence in his own eternal rightness sours
everyone's milk. And Ellis gets as much cartoon humor as he can out of the early
scenes between the brothers, playing Lloyd's rangy cowhand looks against Baker's
toad-hopping energy so they're like a squabbling Mutt and Jeff.

Ellis and the actors deserve a lot of credit: Nothing exposes the limitations of Nash's
imagination more than the joshing male exchanges in this play, especially the one
where Lizzie's father and brothers try to entice the laconic deputy sheriff, File
(Randle Mell), into courting her. Mell is suitably sturdy and he has an amiable
low-key humor, but emotionally repressed File, who can't admit his wife ran off
on him, is almost as crummy a part as Noah. (The biggest mistake the play gets
by with is matching him up with Lizzie, whom we love.)

Still, Nash is no fool. The play has an inner spring: When Starbuck connects with Lizzie, firecrackers go off. Hepburn played Lizzie with a breathless lyricism, as if she
were hanging off the edge of the world, and she made a touching joke out of the
character's gawkiness and her rural manners -- and of course there was no other
way she could make us accept the most aristocratic of Yankee actresses in the
role of a back-country spinster.

Atkinson doesn't try to play against
Nash's language -- she grounds the character in it. Big-boned, plainspoken, she
hauls her suitcase wearily across the stage at the top of the play (Lizzie has
just returned from a fruitless trip to visit some eligible young men in a
neighboring town) and you understand exactly who this woman is. When her family
persuades her it's a good idea to invite File home for supper, she puts on a cool
silk dress (Jess Goldstein designed the letter-perfect costumes), but her legs
give her away -- she doesn't walk like a woman who truly believes she looks good
in that dress. Atkinson gets at Lizzie's feelings directly and then, without a
fuss, she crawls inside them. It's a superb piece of acting.

In Act II, Harrelson's Starbuck leads Lizzie downstage center, takes down her hair and
tells her she's pretty, making her repeat it over and over until she believes it,
and with Atkinson it's clear how much she wants it to be true and how scared she is
that it won't be. Hepburn played this climactic moment by making herself beautiful --
by exposing, suddenly, the swan lurking inside the ugly duckling. In
Atkinson's reading the scene is about something else entirely -- about emerging
sexuality, which carries its own tremulous beauty. When Starbuck kisses her she
sinks to her knees, presses her eyes shut and turns away from him as if she were
holding on to a desperate dream.

Harrelson doesn't duplicate the free-flung athleticism Lancaster had in the Starbuck role, and
it takes him a scene to warm up after a rather stiff entrance. But his hound-dog
approach to this character is sensationally effective. He's irresistibly
clownish -- you can see why people are happy to be suckered by him. When he
delivers his big monologue about the first time he made rain, he peeks out of the
corner of his eye to see how Lizzie's taking it -- to check whether he's turning
her on yet. This grinning goof loves his hard sell so much he turns himself on.

Harrelson's bio doesn't list any previous stage work, but he's as charismatic
here as he is on screen, and he and Atkinson work wonderfully together. Nash's
dramaturgy is as square as they come, but the Sunday-matinee audience at the
Brooks Atkinson Theatre responded joyfully to it, as did the audience at
Williamstown when I saw the earlier version. (Except for Harrelson, who replaces
Christopher Meloni, the cast is the same.) This is a canny mounting of a
crowd-pleasing entertainment -- skillfully staged, with a scruffy, rough-hewn
appeal.

"The Rainmaker" is a fable about how faith carves a fairy tale out of the
workaday realities -- Starbuck's vision of Lizzie unmasks her beauty, while her
belief in him transcends his fakery and brings the rain. All three designers --
James Noone did the sets, Peter Kacrowoski the lighting -- balance realism and
stylization to carry that theme. Noone's work is particularly fine: The
unmoving windmill, realist symbol of the long drought, stands below a slightly
fantastical drop with miniature cut-out farmhouses, each one lit up and plunked
down on a broad twist of road like the landscapes in David Hockney's
English-countryside paintings. And Starbuck's and Lizzie's love scene takes
place under a misty white moon that peers out of a huge expanse of sky.

The
characters in "The Rainmaker" discover that they have to live somewhere between
reality and their dreams. Ellis and his collaborators are dreammakers with
their feet on the ground, able to take a banal play such as this
one and release the magic in it.

Steve Vineberg teaches theater and film at Holy Cross College and writes regularly about both for the Threepenny Review.