"In Nevada" by David Thomson, "24/7" by Andris Martinez and "Double Down" by Frederick and Steven Barthelme

The harsh beauty of Nevada, the glitzy pleasures of Vegas and the thrill ride of gambling. 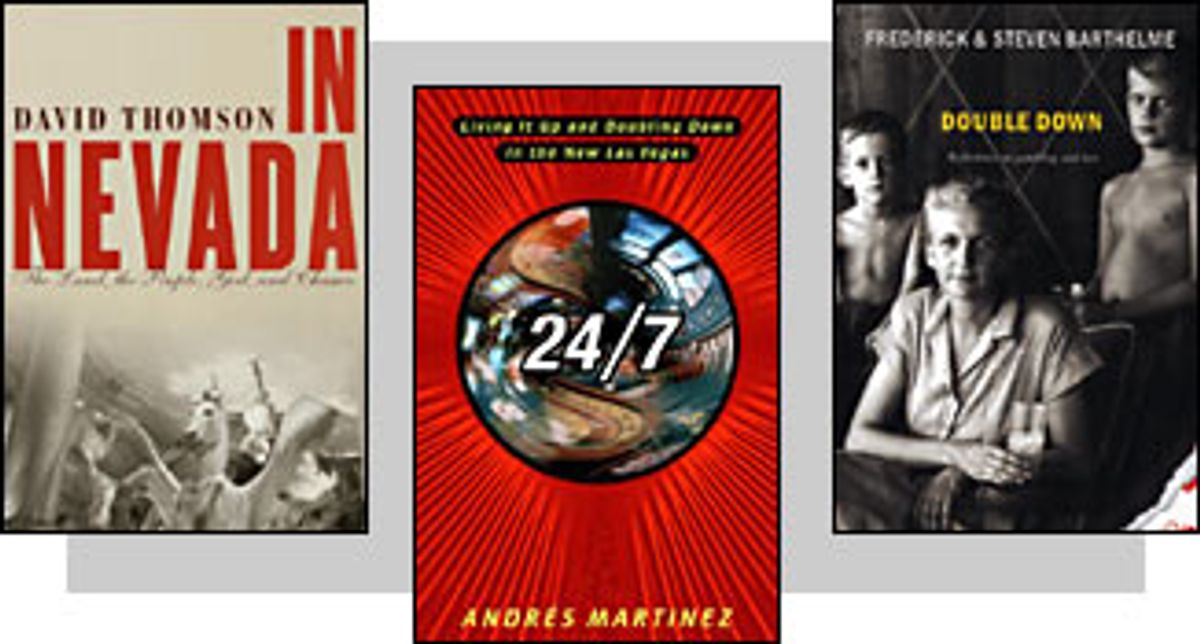 Metaphors come cheap in Nevada. Las Vegas is now America's city, the fastest growing metropolis in the nation. Dedicated to distraction and dollars, the desert strip implodes history every few years and reinvents it as something bigger, grander, more expensive. It's a ludicrous place, a jumble of misplaced architecture surrounded by roller coasters and ringing with the sound of jackpots. The absence of context is the context.

It's an easy place to find meaning -- or to ascribe it. As is Nevada, its home state, a harsh region filled with equal amounts of emptiness and brutal beauty, characters of terrible behavior or stiff determination. In "In Nevada," David Thomson, who has written several books, including three editions of "A Biographical Dictionary of Film," suggests that the great open spaces of Nevada are blank screens. His book, a series of essays that cut between historical episodes, current events and landscape portraits, is an attempt to connect sketches and portraits that in composite add up to Nevada.

Two other new books, "Double Down," by the brothers Frederick and Steven Barthelme, and "24/7," by Andris Martinez, are similar ontological inquiries. Where Thomson looks to empty deserts, military testing sites and tiny, Godforsaken towns for insight into the new West, Martinez examines the bright lights, cheap culture and two-bit gamblers of Las Vegas as residents of a new America. The Barthelmes' book, which tells a personal tale far more serious than either of the others, uses gambling -- the stock, trade and increasing export of Nevada -- as a way to investigate loss and death.

"24/7" and "Double Down" have killer jacket hooks. Martinez talked his publisher into a $50,000 advance on the condition that he would gamble it all in Las Vegas during a month of research. He scores a running tally of his daily winnings (mostly at the beginning) and losses (mostly near the end) as a postscript to each chapter. The Barthelme brothers, both authors and writing professors (and younger brothers of short story writer Donald Barthelme, who died in 1989), together lost nearly a quarter of a million dollars in Mississippi riverboat casinos. The brothers were also indicted and charged with felony conspiracy to defraud a casino, a charge that was finally dismissed without trial in August.

"In Nevada" doesn't have a sexy premise, but it was written by a smart author bent on solving the mystery of his fascination with Nevada. Thomson read and watched nearly everything he could about the state. He also traveled through it several times over several years by car -- the only way to see Nevada.

Similarly, good writers like the Barthelmes and Martinez convey the dizzying rush of winning to readers sitting safely at home. The cards and the dealer conspire to make the player rich. Blackjacks fly. The dealer busts. Chips stack into piles. Bets increase. The reader is right there at the table.

And then, of course, in a couple of bets, the gambling starts to go horribly wrong. Without hand-wringing, both books ruminate on the nature of compulsion and the psychology of gambling. "Double Down" begins with a quick brief on both writers, including a sketch of the modernist house that their father designed in Houston. The Barthelme brothers were raised as individualists but ended up as academics living a quiet, altogether typical university life in Hattiesburg, Miss. In 1992, riverboat gambling was legalized in the nearby coast towns, and Frederick (known as Rick) and his girlfriend wandered into a casino in Biloxi. After playing a few machines, they walked out with $1,100. Later, the same thing happened to Steve and his wife.

"We learned that this was typical," they write. "You win something sizable, and thereafter gambling takes up residence in your imagination ... Neither of us had any idea how much those first jackpots would eventually cost."

Soon after, the brothers start to gamble regularly, tentatively at first, and then with increasing mania, the two of them bombing down the highway at night for a graveyard gambling session. They educate themselves, reading all about odds and betting systems. They win, but they lose more often. When their mother dies, and, soon after, their father, the brothers find themselves with a sizable inheritance. Their reckless play intensifies, and soon the human loss and the financial loss begin to creep into and inform one another. Interspersed with descriptions of gambling trips are family portraits that explain the brothers' complicated relationships with a loving, encouraging mother and a stiff, sensible father, a difficult man whom both writers seem to have loved more than they admired.

In the casinos, where the lively details and the passion for gambling ignite the brothers, "Double Down" is at its best. The Barthelmes write about their family with style and grace, but they're less certain about those relationships than they are about gambling, and these family sections read as if they were still searching for a conclusion.

At times, "Double Down" reads like a confessional, a 200-page public apology with overtones of a Gambler's Anonymous speech. "We were adult children, overage children, who lost our parents and reacted with a clear disregard for the self, not to mention the other," they write. "Maybe it was about grief and relief and release, and maybe a newly visible aggression at having been held hostage for a lifetime." This flaw, though, is redeemed by the authors' honesty about their problem. They know they're addicted to gambling, and they explain exactly how they rationalized that addiction -- it didn't hurt other people or even themselves, only their bankrolls.

More problematic is the implication that the Barthelmes are of a different species than their fellow gamblers. They reveled in a pastime that took them away from the comfort zone of academic life, yet they make it clear that they were only slumming with the riff-raff in the riverboats. Their fascination with the tawdry casinos and their players is explained with a curious detachment: "We loved them, at a respectable distance, the same distance at which one loves characters in books or on television shows." It's an oddly superior stance, especially since Frederick Barthelme's last novel, "Bob the Gambler," lovingly portrayed a poor, working-class family with an elegant realism.

One of the Barthelmes' most interesting observations is that winning or losing really doesn't matter to a gambler. He simply has to keep playing, for life happens only when there are stakes on the table. Everything else is slow-motion, incidental. Andris Martinez comes to a similar understanding in "24/7." His month-long trip begins at the bank, with Martinez cashing that $50,000 check from his publisher. He flies to Vegas and sets himself up in the first of 10 mega-hotels, the Egyptian-themed Luxor, which is a giant pyramid with a life-sized model Sphinx out front. For the rest of the trip, he flits between resorts, gambling mostly at night, spending his days interviewing anyone he can find.

Martinez is a good newspaper writer. He was born and raised in Mexico, studied history at Yale, Russian history at Stanford and law at Columbia. After a brief stint as a lawyer he flipped careers to journalism and did time at the Pittsburgh Post-Gazette and the Wall Street Journal. To Martinez's credit, he doesnt pretend to be much more than a craftsman journalist. He would rather report than ruminate. He tells jokes. He gets the story.

Martinez rolls into town with a decent bag of books, having already read several of the standard critical texts and historical overviews of Las Vegas. He reads Dostoevsky's "The Gambler" -- a work that the Barthelmes and Thomson also cite -- by the pool. (It's either a hell of a coincidence or a worldly warning that, just like the protagonist in Dostoevsky's novella, the Barthelmes and Martinez all gambled with money that was ostensibly not theirs.)

Martinez rehashes bits of the local paper and has the self-consciousness to explain to the reader exactly what he's doing. He talks to everyone: cab drivers, career dealers, career gamblers, a tennis pro, a water conservationist, a preacher who moonlights as a towel man in a strip joint. Everyone except unavailable hotelier Steve Wynn, the man behind the Mirage and the expensive new Bellagio. Wynn, who wouldnt return several phone calls, is to a bemused Martinez the personification of the new Vegas, the Disney-style entertainment capital. As if to get in the spirit of the family theme of the new Vegas, Martinez entertains his mother for a few days, and then his wife, who loves the spas, good restaurants staffed by world-class chefs and hotel rooms larger than the couple's New York apartment.

Like a book-length magazine story, the charms of "24/7" are chiefly its minor epiphanies. "To linger over a loss is to stop being a gambler," writes Martinez in a chapter where he loses $20,000 in one session. Another: "Las Vegas was never a defined place that sold its soul to entertain outsiders, like a Santa Fe or a San Francisco. Las Vegas was invented to cater to visitors' whims, and to change with them, making it the nation's ultimate mirror." One more: "Las Vegas will have consumed its history the day that the first gangster-themed hotel opens on the strip."

Martinez is an outsider, a tourist, and he really never lets you forget that he went to Vegas for one month in search of a story. While he only limns the story of how the mob built Vegas, in "In Nevada" David Thomson tells the story of gangster Bugsy Siegel, who lost $6 million on the Flamingo, then zooms in for the nine gun shots that killed him, one of which dislodged an eyeball that rolled across the floor from his corpse. There is a strange proprietary sense about "In Nevada." Thomson's smart enough to know that one of the central myths of the West is that things were always better in the good old days, yet he nearly fetishizes ghost towns, and just about any use of the desert -- whether by the Air Force, by high-speed car racers, or by the annual Burning Man festival in the Black Rock desert -- rankles him. In Thomson's view, you're supposed to be dwarfed and awed by the landscape, its light and its mysteries.

Thomson is a fine portraitist, and his chapters are fact-filled and compellingly suggestive, particularly one on Frank Sinatra as a son of Nevada. A section that cuts between a tour of the Nevada Test Site and the early history of Vegas, equating the risk of gaming with the international gamble of the Cold War, also makes you instinctively want to trust him. So it's odd that he can see that contradictions are at the center of Las Vegas and confidence games, but he doesn't get that the great unresolved conflict of the West is how to use it. Land in the East was taken for granted by early Americans. The West was won, bought and stolen, and America has never really reconciled itself with that. Silver mines and testing grounds and the Hoover Dam and even Las Vegas are intrusive as hell, but theyre also as much a part of the West now as big skies and open prairies.