The new kid at the New Republic

Peter Beinart, the latest editor at the political weekly, isn't nervous. Much. 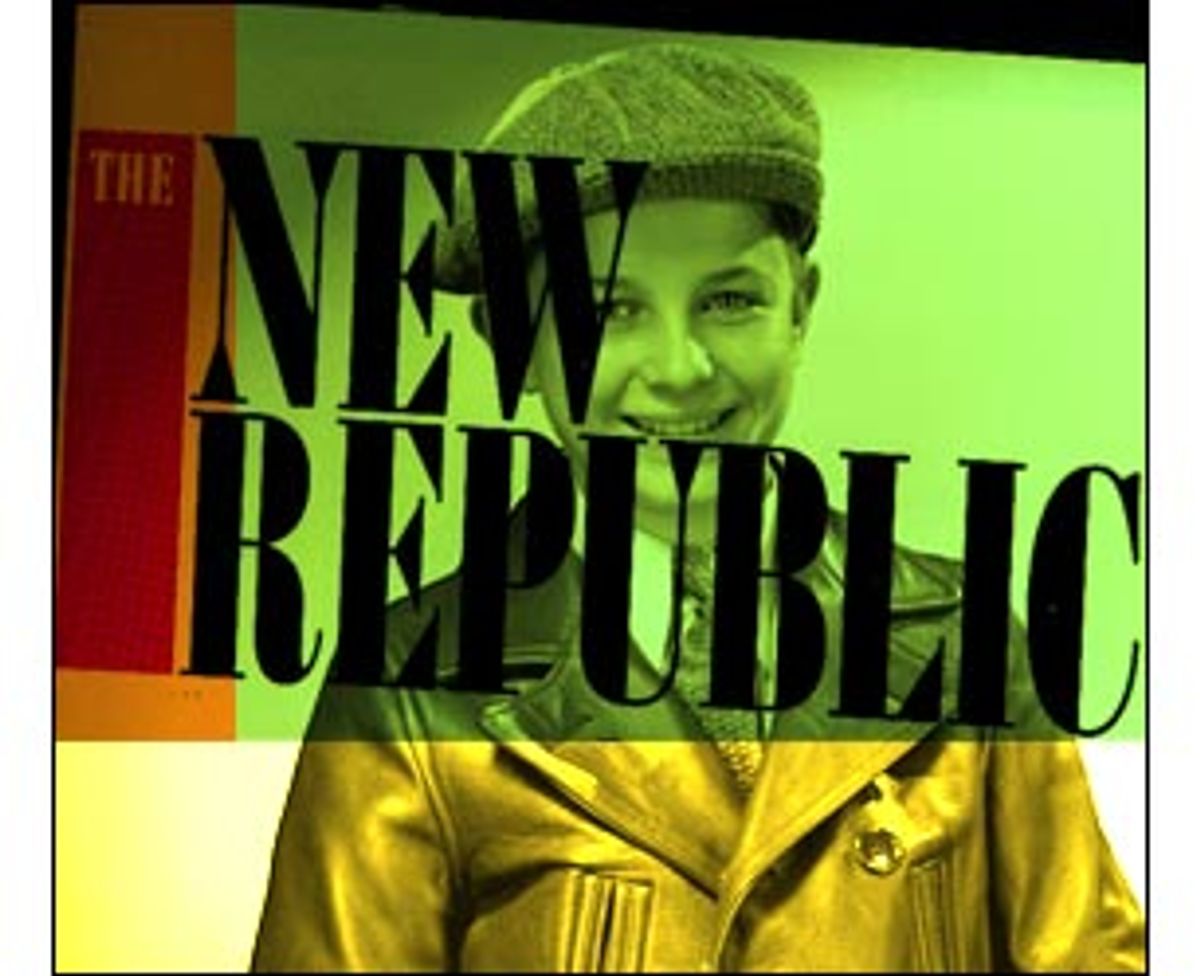 Peter Beinart, the recently appointed 28-year-old editor of the New Republic, is sitting in one of the plush chairs in the front lobby of Manhattan's Royalton Hotel, holding forth in stentorian tones about his editing style. "One of the things I spend a lot of time on in my editing is [making sure] that you can figure out pretty early on what the argument is, which separates us from a style section profile --"

He stops himself, bringing his hand to his mouth as he surveys the nearly deserted lobby. "I'm speaking so loudly," he says, several registers lower. "Who knows what other editors are here?"

Such is the naiveti of the Washington editor in New York. Though the Royalton's restaurant, 44, used to be a hot spot for Condi Nast editors of yore (time was you could find Tina and Anna and Graydon all lunching with writers there on the same afternoon), it's cooled of late, due in part to CN moving its headquarters farther west to Times Square. And it was never a haunt of New York Times editors, most of whom feel that they can't afford to eat there. Besides, the lobby has always been for wayfarers -- people, in other words, like Beinart.

Lord knows, though, he's probably learned to whisper for good reason. When TNR editor in chief Martin Peretz announced on Sept. 29 that Beinart would be replacing editor Charles Lane (who became an editor at large), there were cackles and catcalls even in jaded New York media circles. The news of Lane's departure was known to many (including Washington Post media critic Howard Kurtz) before it was known to Lane (now that's Condi Nast!) and Peretz's history with editors is like Henry VIII's with wives. Since 1974 he has gone through five, and his firing of Michael Kelly, now of the Atlantic, in 1997, was a magazine dust-up of Steinbrenner-Martin dimensions. Is Beinart -- who served under Kelly, Lane and Andrew Sullivan -- looking over his shoulder?

"I think of doing this for quite a while," he says, with seeming sincerity. "I need to think in those terms for my own sake." And though the position of editor at the lively, quasi-liberal weekly would seem as long-term a gig as, say, playing drums for Spinal Tap, Beinart points to other reasons for the turnover. "The magazine has this history of palace intrigue but there are also, to be honest, more mundane factors to explain why people leave the New Republic. They get scooped up by people who pay a lot better." TNR alumni include Michael Kinsley of Slate, Hendrik Hertzberg of the New Yorker and writers such as Sullivan and Margaret Talbot, whose work has appeared in the pages of the New York Times' Sunday Magazine.

Peretz, for his part, hopes Beinart "will be a lot more aggressive in commissioning, and adventuresome in commissioning, both tightly reported stories and big-idea, heavy-thinking stories." And the kid's a natural. "He's one of these people who has, first of all, been reading TNR since he was a teenager," he said over the phone. "There is a certain stratum in the population of which this is true. And he is almost paradigmatic of it. So it's not simply that he has worked with three editors but he has been reading it for nearly half his life."

Beinart is in town to talk about the magazine and the first three issues that have appeared under his name. He is brandishing the Dec. 6 issue, which focuses on the fight over the expelled high school students in Decatur, Ill. "Liberals are on school discipline where they were on crime and on welfare 20 years ago," he says in touting a package that includes a report from Decatur by Michelle Cottle and two editorials on the conflict. "This is what we call inside 'the last gasp of permissive liberalism.'"

For most of its 85-year history, TNR has been a bastion of liberal (if not left-wing) opinion. But in the mid-to-late-'80s, during the reign of Reagan, then-editor Kinsley alarmed readers (and woke up a few observers) when he began running controversial cover stories that were promptly labeled "neo-con." Suddenly, welfare wasn't necessarily good. And neither were unions. And everything Reagan was doing was not, by its very nature, evil. It was the magazine's modern heyday, editorially speaking, and definitely shifted its place on the political map.

"Being all over the map is the magazine's strength and its weakness," says Beinart. "The Nation probably errs too much on one side and the Standard on the other. If you are a committed leftist, or a committed conservative, those places are probably better for you than we are. We are not, if we ever were, a good place if you're liberal -- Teddy Kennedy liberal -- to say, 'Oh, I haven't been following this stuff. TNR will tell me what our side says.' You will be confused. We may even say radically contradictory things in the same issue."

Still, Beinart (who has functioned as both a writer and managing editor at TNR) insists the magazine's politics are not conservative -- though the staff certainly represents a plurality of opinions. "In our own weird way, we still do consider ourselves a liberal magazine. We wouldn't spend so much time criticizing liberals if we didn't care about them."

In an atmosphere that has been described as everything from collegial to dysfunctional (by TNR survivors), it is the editor's job to forge some voice and direction without silencing the dissenters. And though former editor Kelly complained he was fired for running too many stories critical of Peretz's pal Al Gore (and Salon's Jake Tapper claimed he had a story about Bill Bradley killed by Beinart because it was not critical enough of Gore's opponent), Beinart begs to differ, and points to the evidence at hand. In the issues he has edited, he finds no fewer than five stories explicitly or implicitly critical of the vice president or his presidential campaign. Such a survey is "a better way of answering that question," he says. (Peretz insists, "I'm not second-guessing him or setting an agenda for him. I don't know what is in this issue or the next." And though Peretz's "say" as EIC is a little unspecified, he adds, "I only have my say when I am mightily dissatisfied." Gulp.)

With circulation just under 92,000, TNR poses no threat to, say, the New Yorker (832,119) -- though neither does it offer cartoons and theater listings. For a magazine that helped make wonkishness fashionable, those are pretty respectable numbers. (The conservative National Review, for contrast, boasts a circulation of 157,596, while the more left-leaning Nation has an estimated 97,000 readers.) Beinart claims he has no mandate to drive the magazine's numbers up and is blissfully unaware of its readers' demographics, demurring that those are advertising concerns. (TNR's 85th anniversary issue boasted 40 ad pages, a best for the decade.)

"I'd like circulation to be up," he says, "but I try to get a sense of if people I know are reading it and it's provoking them. If they are not, then why would people out there buy it?"

"Out there," of course, means all those places outside the Beltway where politics happen on the grass-roots level -- even places like New York. This doesn't explain Beinart's presence here, of course. Why has TNR retained the pricey publicity firm of Howard Rubenstein to represent it? And why is he talking to me?

"What am I trying to convince you of?" he asks rhetorically. "That TNR is back. That young Beinart brings a powerful driving energy noticeable in every twitch of his eyebrow, with the maturity of a 50-year-old and the verve of an adolescent ..." In truth, the fast-talking, slightly hyper editor's self-mockery belies a definite passion for politics, passion inherited in part from his parents, who married in South Africa before coming to the United States.

"Politics was really felt to be life and death there in a way that happens so rarely here," he says of the political upheaval in that country and his family's stake in it (he studied African affairs in college as well). "People's families split up over politics. A close friend of my father was hung. It was a crazy and very brutal period when I was coming of political age in the mid-'80s. So it mattered a lot to me."