The WTO has united labor and the radical, countercultural left in a way the anti-war movement never could. 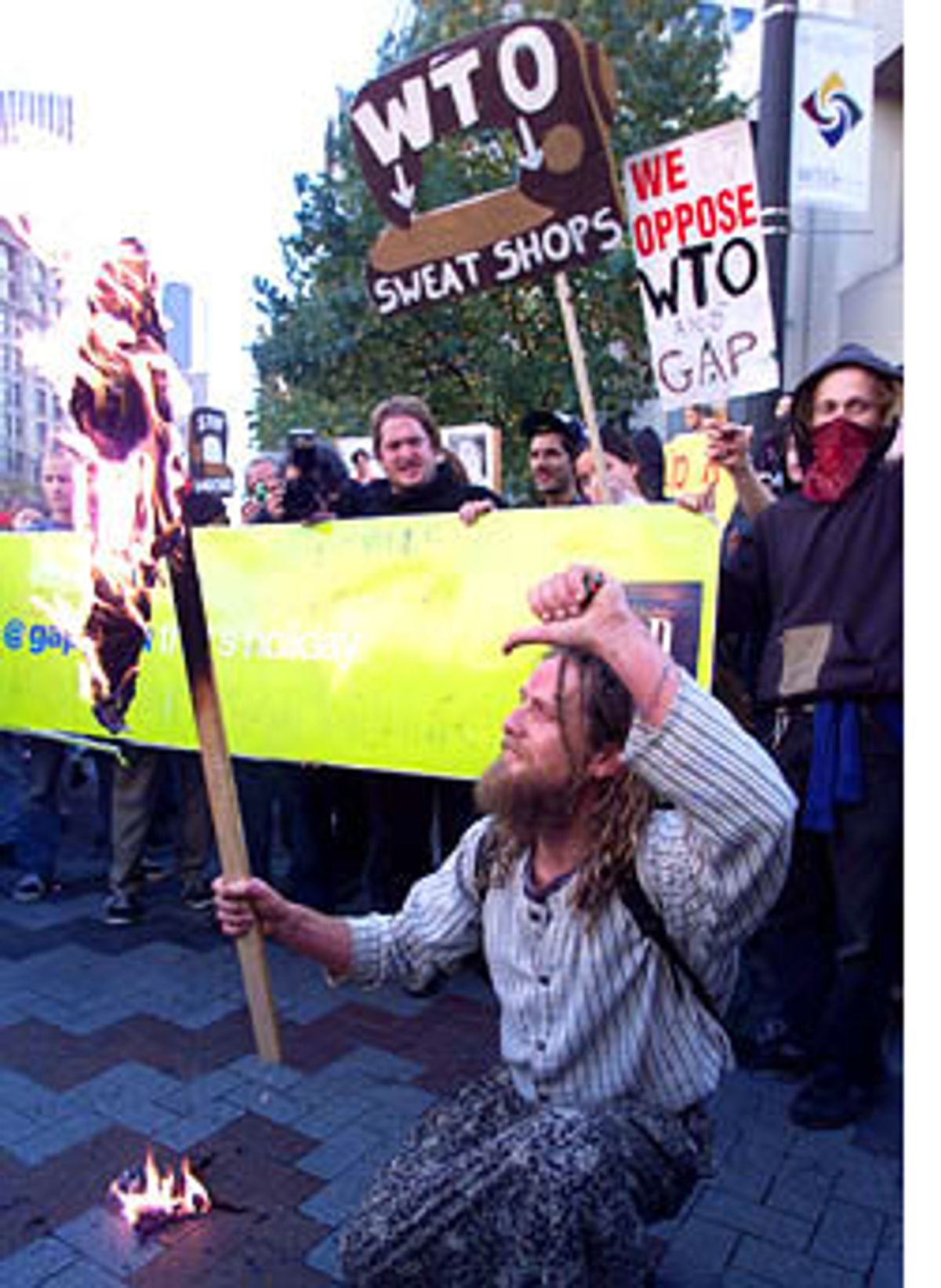 United Steelworkers of America secretary-treasurer Leo Girard was busy explaining to a group of foreign delegates to the World Trade Organization why they couldnt get through the human blockade of protesters sitting in and milling about the streets of Seattle. "Were starting the revolution in America here today," he explained matter-of-factly, a big smile beneath his moustache.

It was easy to understand the hyperbole as the protests unfolded Tuesday morning, preventing the opening of formal WTO activities. Ten years ago, who would have thought that Teamsters and kids in dreadlocks would be marching together, let alone under the banner of "fair trade"? The WTO has united labor and the radical, countercultural left in a way the anti-war movement never could.

Things turned uglier Tuesday night, when police charged protesters who refused to disperse after Mayor Paul Schell declared a 7 p.m. to dawn curfew in the city. Many of the trained non-violent protesters and labor activists who'd descended on Seattle had left for dinner, or a well-attended WTO debate featuring Ralph Nader.

That left behind a harder-core direct-action contingent, some of whom had been spoiling for confrontation. Police fired tear gas, and Gov. Gary Locke called in the National Guard, expected to arrive Wednesday -- the same day as President Clinton.

But the day started more peacefully, at a park near the citys famous Pike Place Market, where thousands of protesters gathered in the pre-dawn dark as a chilly rain fell. Singers, rappers and speakers talked about the giant, labor-organized rally coming up later in the day, and the stop-work action taken that same morning by longshoremen up and down the West Coast. They displayed their varied causes with costumes and street theater.

Placards proclaimed, "Secrets are not democracy" and "No Globalization Without Representation," while others declared support for rebels in Chiapas, human rights in Burma and the ethical treatment of animals. People dressed up as dolphins and sea turtles, both of which are endangered by WTO decisions rejecting U.S. laws as trade barriers. Then there was Genetically Modified Man, a costumed character in street theater, one of many objectors to bioengineered food.

The early morning protesters snaked their way through the streets near the Paramount Theater where the opening session was scheduled. Police, carrying clubs and tear gas, wearing riot helmets and gas masks, lined up across the street. Protesters linked hands or sat down in the streets, blocking access to the theater. A few groups -- mainly masked young people dressed all in black -- tried and occasionally succeeded in breaking windows in a McDonalds, a Nordstrom and other downtown stores. But plenty of others gave the whole affair a joyous flavor by juggling, dancing, playing music and wheeling kids in strollers.

The vast majority were peaceful. When police pulled up in an armored vehicle and began using tear gas, most began chanting, "No violence, peaceful protest." Eventually police made a dozen arrests in the morning, mainly of people who had consciously decided to be arrested as an act of civil disobedience. Police shot some rubber bullets and sprayed a form of tear gas at demonstrators during the morning.

But as the morning blockades slowed down, the action picked up in the stadium north of downtown. There were speeches by labor leaders from the United States and around the world as well as environmentalists and other allies, such as Students Against Sweatshops.

Then the labor delegations began their march downtown. The odd juxtapositions continued. Greenpeace sponsored a green condom made of about 30 foods (the message: "WTO -- Practice Safe Trade"), and a contingent of young women with bared breasts chanted for justice with slogans like "No BGH" -- the artificial hormone used to stimulate cow milk production -- as a giant Steelworkers dirigible floated over their heads.

At the head of the march as it headed toward Seattles convention center, John Goodman, a Steelworker locked out by Kaiser Aluminum in a contract dispute, carried a banner linking two of the crucial themes of the protests -- the threat of the kind of trading regime enforced by the WTO to labor rights and the environment. Kaisers owner also controls Pacific Lumber, which has been attacked for clear-cutting Northern California forests.

"What brought me here is concern for humanity and our environment thats being destroyed through the world and about the third-world countries that are being exploited," Goodman said. "These people are our brothers and sisters."

The labor movement provided most of the bodies, from a wide variety of unions -- Steelworkers, Teamsters, longshoremen, public workers, building trades workers, farm workers. But unlike the labor movement of old, unions embraced a wide coalition of groups whose message they did not control. On WTO issues, organized labor gives primary emphasis to finding ways to enforce core, internationally recognized labor rights -- the right to organize and the prohibition of child labor, forced labor and discrimination. But it has also endorsed the goals of environmentalists and advocates of consumer health.

Some unionists supported the militant action by the early morning protesters, who succeeded in disrupting the beginning of the WTO meeting. "Its not enough to get a seat at the table," argued Vic Thorpe, the retiring general secretary of the International Chemical, Energy and Mine Workers, as he watched the street protests. "This is a better protest than to be conferring inside the hall, and in a real sense its more democratic."

The overwhelming sense of the march was of a magically coherent protest by a staggering range of people -- guys in union windbreakers and punks with pierced cheeks, high school students and the elderly -- brought together by opposition to the WTO and what they see as a corporate world order that rolls over the needs of young women in sweatshops, sea turtles, displaced American factory hands and anybody who eats food, drinks water or breathes the air.

Despite the diversity of causes, there was a remarkable unity in the message: The WTO and its free-trade rules are the tools of corporate interests, and the losers are the majority of people in the world and the environment. "The WTO gives rights and powers to corporations and takes power away from people," argued 19-year-old Adam Fargason, a University of Alabama student who credits his political awakening to linguist-writer Noam Chomsky and Dead Kennedys rocker Jello Biafra. "It violates democracy."

As the labor rally broke up and marchers headed back to their buses, there were some continued skirmishes, as police fired more gas and the contents of a dumpster burned in the middle of an intersection.

The WTO did accomplish something remarkable: It brought together strains of protest that rarely even talk to each other, let alone act together. "Everything is so divided, but with one spark, everything comes together," Fargason said. "I think thats whats going on here, and it will keep going."

David Moberg is a senior editor at In These Times and a fellow at the Nation Institute.