A good man is hard to write

Hemingway-tough or Fitzgerald-sensitive? Today's novelists scramble for a masculinity that doesn't seem fake. 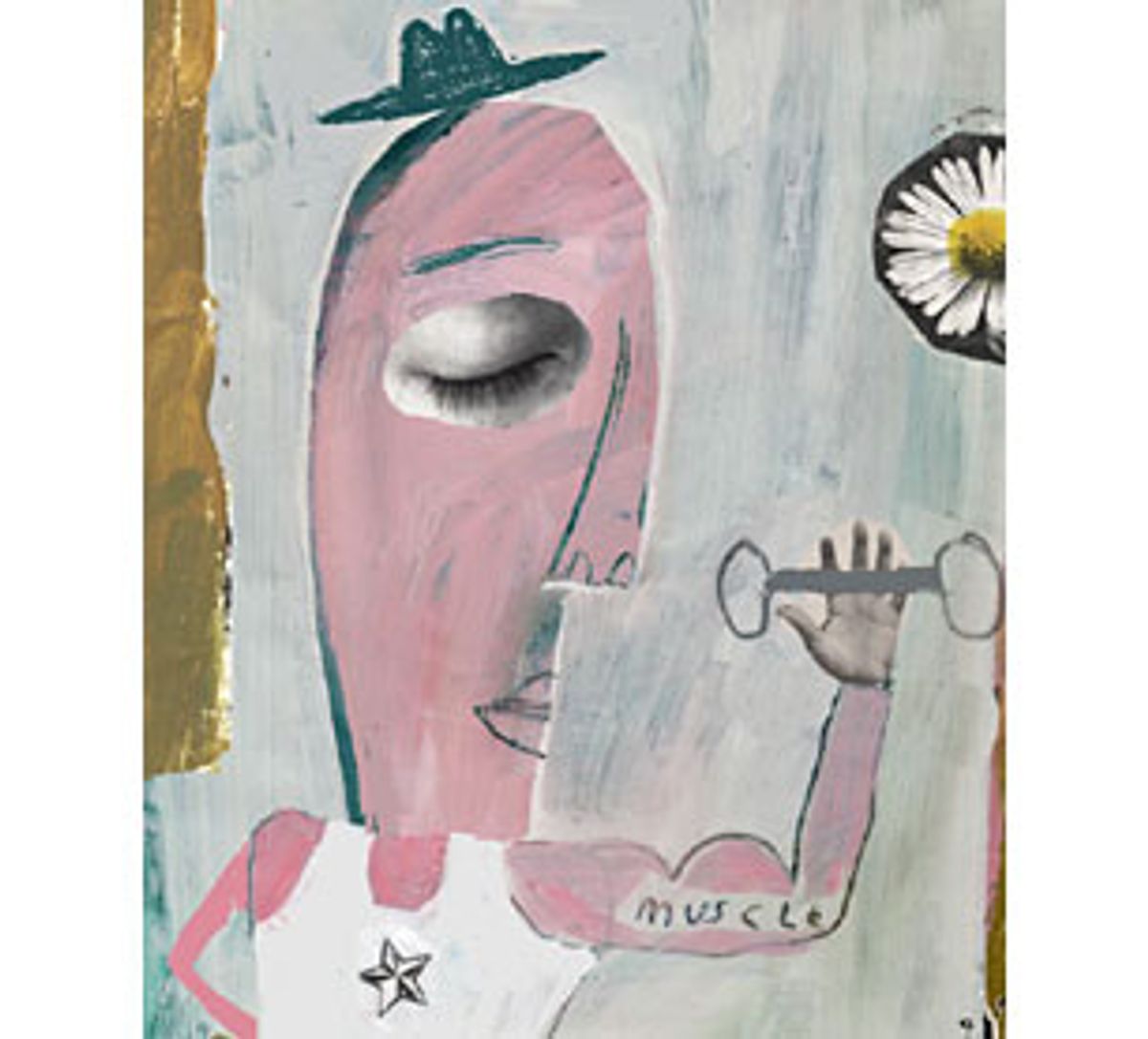 Deep into the tempestuous events that form the climax of "The Beach," the fitfully precocious debut novel by Alex Garland about a beach commune gone bloodily awry, the narrator, Richard, is confronted by the ghost of a man who earlier slit his own wrists in the neighboring room of a Bangkok guesthouse. "The horror," is all the ghost will say, after appearing on the beach of the title. Richard is perplexed. "What horror?" he asks.

On its most obvious level, of course, this exchange is little more than a tart allusion to the dying words of Joseph Conrad's Mr. Kurtz; yet something else is happening beneath this exchange -- something much larger, and much closer not only to Garland's novel's dark heart, I think, but to the heart of contemporary masculinity as well. The "horror" the ghost alludes to comes soon enough: The formerly high-minded backpackers in the commune tear the limbs and entrails from three corpses in a berserk bout of atavism, an event that Richard observes with the sort of cold detachment that one more typically applies to, say, a Fox documentary.

The television analogy seems particularly apt because there is a filmic distance to the proceedings, a sense that carnage like this occurs in movies and video games but not in the humdrum ragbag of real life. "What horror?" Richard pleads. Precisely: By the time we reach the novel's chilling last lines, we come to realize that Richard never got it. Even the most visceral of experiences has been reduced to something cinematically sterile: Richard is content with the Hemingwayesque cachet that he gleaned from the ordeal, his cool scars and his "thousand-yard stare."

This reminds me of a scene in Nick Hornby's glibly enjoyable "High Fidelity," a 1995 novel about the lovelorn fuck-ups of a London record-shop owner. Hornby's narrator, puzzled as to whether he enjoys the act of having sex or just the fact of having had sex, pines for a way of dodging an imminent coupling: "If there was a way of cheating, of circumnavigating the next bit -- getting Marie to sign some sort of affidavit which said I'd spent the night, for example -- I'd take it." Once again, the experience itself -- the fumbling present-tense sensation of it -- is reduced to a dry and meaningless husk, a nettlesome means to an end; and it calls to mind the uncertainty Neal Stephenson expresses in his new novel "Cryptonomicon," about whether it's possible to "have a serious experience anymore."

In the June/July 1999 issue of Men's Journal, under the rubric "MJ's Annals of Masculinity," a cartoon (drawn by P.S. Mueller) shows four species of American man -- oldster, aging hipster, square-jawed broker-type and a short toothy fellow who I must assume is intended to represent my own generation, which, for pesky want of an acceptable sobriquet, we'll call 20-something. The cartoon reads, "A Generational Thing," and above each specimen of man floats a thought balloon: "the war," muses our oldster; "the drugs," our ponytailed hipster; "the bucks," our '80s-ish broker; and, finally, from our youngster, "the stuff."

It's an interesting, if not very funny, cartoon. I'm curious, for one, about what delineates "stuff" from "bucks," besides the obvious: bucks is money, and stuff is ... stuff. Maybe cartoonist Mueller means gadgetry, snowboards, pet robots, things of that ilk; I don't know. But my suspicion is that he's alluding to the blasi sense of lazy excess that has enveloped my generation throughout the '90s -- the blithe and not entirely incorrect assumption that anything and everything is for sale (literally, but mostly figuratively, I mean).

That motif of collecting -- the lust for stuff taken to its nth degree -- appears in both "The Beach" and "High Fidelity." Says Richard of his travels, "I went about it in the same way as a stamp collector goes about collecting stamps, carrying around with me a list of all the things I had yet to see or do." Hornby's Rob claims something like a thousand record albums, most of them the sort of weepy music that bachelors play when they're feeling miserable and/or looking for an excuse to chain-smoke. His collection represents his sole accomplishment, as well as the supreme chronicle of his life. "I try to remember," he says, "the order I bought them in: that way I hope to write my own autobiography without having to do anything like pick up a pen."

And thanks to his albums, of course, he can also experience the bluesy pits of heartbreak without ever having to actually interact with a woman. Rob's music, Richard's scars: ultimately these things are just badges, objects rather than essences, or, to push the metaphor, just stuff. The search for authenticity -- that noble quest that put everyone from Whitman to Kerouac on the road -- has been chucked in favor of another search: for the appearance of authenticity, for the stuff that says "I'm alive, I'm a man, I've lived a man's life." As another young writer, Kevin Canty, has his narrator decree in the recent novel "Nine Below Zero," "Being a man was acting like a man." (Italics mine.)

How Papa must be spinning under the topsoil. Or is he? He must certainly be contented by the fact that his creaky model of masculinity (or at least portions thereof) has swung back into vogue after two decades of rotting in the dustbin. In Britain, this swing has been dubbed the "New Laddism" -- a Maxim magazine-fueled, hooliganist backlash against the namby-pamby genus of "sensitive" men who supposedly whined their way through the '70s and '80s. Laddism has taken root stateside in those often-noxious hordes of martini-quaffing, cigar-munching, Sinatra-loving Turks. After years of dormancy, old-fashioned manliness has charged back into the Zeitgeist.

Sort of. What has actually emerged is a manliness tempered by irony, a postmodern model built upon allusions and illusions that, at its heart, is less ideological turnabout than fashion trend. Consider: Hemingway's hero, by whatever name he appeared, inevitably bore the scars of heartbreak or war or both. But those scars defined him -- they represented something attained, be it wisdom or courage or, as Hemingway preferred, cojones.

Fast-forward to Richard in "The Beach": "I got my thousand-yard stare. I carry a lot of scars. I like the way that sounds. I carry a lot of scars." (Italics his.) Richard's scars don't represent anything but themselves; they may as well be tattooed to him. And he likes them, with a prideful affection similar to that of a woman for, say, her Prada bag -- for any cool accessory. Imagine Hemingway's Nick Adams or Frederick Henry or Harry Morgan or, egad, Jake Barnes admiring his wounds, reveling in his newfound gravitas.

But then, conversely, try to name even a single young male character from recent fiction with the sort of graven principles that those characters possessed, those men whose daily acts seemed tied -- however fallibly -- to a code of behavior and even of thought handed down from their fathers. Impossible: That tired beast irony has walloped us all, like some sort of cultural downer. Even the most Hemingwayesque of recent titles, such as battlefield journalist Scott Anderson's mordantly sincere first novel, "Triage," features characters notable for their detached indifference.

In Anderson's case, his protagonist, Mark Walsh, is a combat photographer, and though he loses a pal in the smoky disarray of modern-day Kurdistan, the war he witnesses -- which he observes for purely commercial reasons, though he does have a little yen for danger -- is seen through a camera lens. A thin distinction, to be sure, but a distinction nonetheless: The experience, like any theater, is secondhand.

And yet, despite the apparent collapse of authentic experience in these fictional worlds, one aspect of masculinity seems quite impervious to time, fashion or pomo machinations. The men in these novels are still more or less seeking to be saved by women. (I say "more or less" due to Garland, the lone exception; in both "The Beach" and his follow-up novel, "The Tesseract," romantic love is peripheral, and, truth to tell, rather passionless.) In this regard, these authors are the latest notches on a continuum that extends back to Hemingway and leads straight up through Andre Dubus, Raymond Carver, Richard Ford and Jay McInerney. As Hornby's Rob tells us in "High Fidelity": "I always think that women ... can change and redeem me."

And it seems -- in books, at least -- that they can: In Anderson's novel, it is the stories of an old man and the love of a good woman that turn Mark's war-weary eyes from "green stones" into "eyes lit with longing and sad hopefulness and the promise of future laughter." Anderson is the least cynical of the bunch, as I've said, but even Hornby -- who's been hailed as a warts-and-all confessor of the bad-boy psyche -- is nothing more, deep-down, than a fizzy romantic, a sentimentalist whose two novels (his latest, "About a Boy," is the other) climax in scenes so conventional in their celebration of monogamous unions that Jane Austen might approve.

The greater lot of these characters -- like those of Ford, Carver et al. -- are also incessantly throttled by a false nostalgia for simpler times, some of them gripped by what critic Vivian Gornick describes as the "keen regret that things are no longer as they once were between men and women." Others, like Richard, crave what they see as the viscera of pure experience, which for Richard is exemplified by the Vietnam War, or at least Hollywood's depiction of that conflict. "I'm happy to be a bloke, I think," says Rob in "High Fidelity," "but sometimes I'm not happy being a bloke in the late twentieth-century. Sometimes I'd rather be my dad." Or here's Canty, in "Nine Below Zero": "The old people were strong, they had a place ... What had been lost?"

And therein, I think, lies our question. What has been lost? Certainly the capacity to feel the dazzlingly breathless wonderment that accompanies true experience (good and bad), as Stephenson suggests. That capacity lies before us wheezing and wounded, perhaps irreparably. What does this mean for the average bloke? Hard to say. Physical experience, after all, has been the cornerstone of our concept of traditional masculinity; nowadays men are taking to the Arctic Ocean in rubber rafts or hopping up the Himalayas on pogo sticks -- desperately hoping, every last one of them, to feel a smidgen of it.

And while our cultural notions of masculinity have ebbed and flowed in the last half-century, the core and code of manhood that Hemingway so carefully described and tried to obey (but certainly didn't invent) still somehow hangs with us, even if, as now, it's been reduced to an illusory mask that men simply wear. Oh, there's been talk, books written, hands held. But the archetype lingers, like a schoolyard bully. We may despise it, but we're inextricably bound to it, at least for now. As poor Rob says: "I hint at a deep ocean of melancholy just below the surface. But it's all bollocks, really."

Bollocks: exactly. But it's the only bollocks we've got.