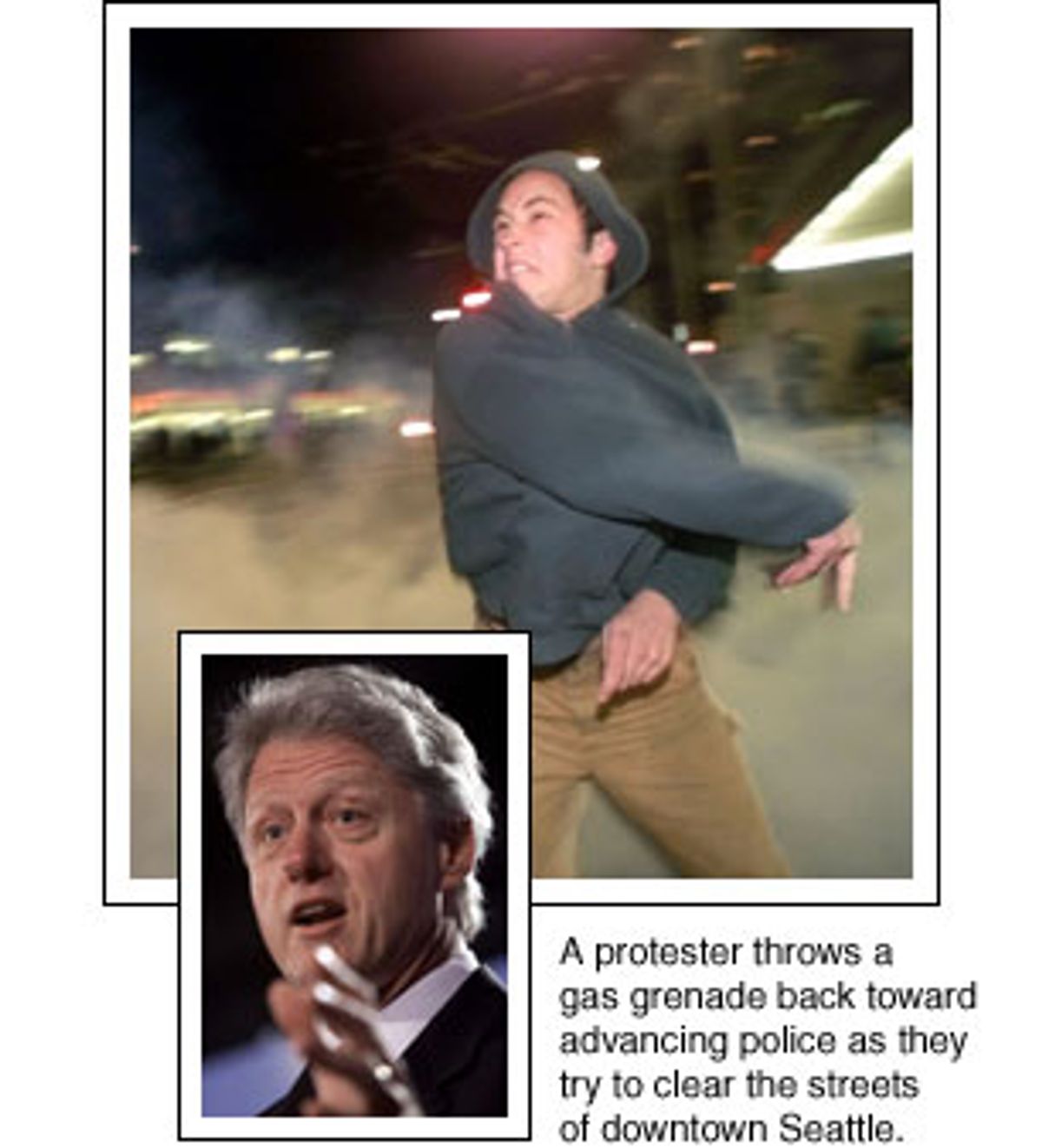 President Clinton, bobber and weaver, master of ambiguity, may walk away from Seattle without a political catastrophe, but it all depends on what the Democrats learn from this astounding week.

On the largest questions at stake in this week's collision between what may well turn out to be the dominant political passions of our time, Clinton veered and tacked so adroitly as to draw diametrically opposed treatments on the front pages of the New York Times and the Washington Post.

The Post's Clinton is the one with his ear tilted upward, to big money, and even higher, to the celestial spheres whose music has the ring of free trade. The headline: "Clinton Defends Open Trade; President Condemns Seattle Violence." Only in the 10th paragraph did the Post reader come upon Clinton addressing what he delicately called "all the interesting hoopla that's been going on here." Here the president addressed the tens of thousands of nonviolent protesters graciously: "For those who came here to peacefully make their point, I welcome them here because I want them to be integrated into the longer-term debate." (Immediately he also condemned "those who came here to break windows and hurt small businesses or stop people from going to meetings or having their say.")

Meanwhile, the Times' Clinton has his ear to the ground. This is the Clinton of "Putting People First," the Clinton of the 1992 bus ride through Ohio with Al Gore, the Clinton who knows that protest came rumbling to the surface this week not because of some raging anarchists but because a lot of people are properly anxious about whether the big players in global commerce have their interests at heart. The Times observed this president to be on a listening tour, not only respectful of protest but mindful of the legitimacy of some of its demands. The headline: "Clinton, Acknowledging Protests, Calls On [World Trade Organization] To Be Less Secretive." The Times moved on to quote Clinton using a verb not commonly uttered by presidents in public: "I implore you: Let's continue to find ways to prove that the quality of life of ordinary citizens in every country can be lifted, including basic labor standards and an advance on the environmental front."

Mindful of the powerless, the president implores the powers.
Two headlines, in effect, for two wings of the Democratic Party. But the net effect is to give Clinton a graceful out from the free-market orthodoxies that thrill the Wall Street side of his coalition. He, and would-be president Al Gore, have a chance to excite some of their base hitherto left cold even by the triumphs that have trickled down to them.

The chance is the result of Clinton having, at the least, skirted a disaster partly of his own making. Recall that the Seattle WTO meeting was supposed to be a crowning spectacle for a free-trading president surfing the crest of the expansionist tide that is the Democrats' strongest appeal. The shiny symbolism of Seattle, after all! The city next door to Redmond! Starbucks! Boeing! Amazon! Seattle seems like a shrine of forward-looking, brand-name, 401(k) America. But for many reasons, not least widespread suspicion of America's entitlement to be the conductor of the orchestra of world power, the collaborators Clinton expected decided not to give him the pleasure of their company.

Recall how much Clinton had wagered on free trade during his first year in office. On the passage of the North American Free Trade Agreement he staked the prowess of his administration, its claim to master a lurching economy. He wasn't alone -- he was joined by Al Gore and then-Sen. Bill Bradley. Free-trade economics came before health care, before welfare, before anything else substantial. Unionists and environmentalists felt rebuked, scorned, taken for granted. They were made to feel like sticks-in-the-mud, destined to be outdone by the sleek, fast-bucking, lean and mean America of K Street, Wall Street and Silicon Valley.

With the calamity of Clinton's health care proposal, his tenuous coalition broke apart for the second time. It got battered again when he decided to throw in the towel over welfare and signed Congress' plan after two vetoes.

Since that moment in 1995, Clinton has succeeded in stitching together his uneasy coalition of new and old (formerly new) Democrats only in extremis -- during that sickeningly long year when the issue at stake was to keep Ken Starr, Henry Hyde and Trent Lott from shredding the Constitution in their mad crusade.

In the meantime, enter John Sweeney. Elected to the leadership of the AFL-CIO in 1995, Sweeney knew that the unions' back was to the wall and that they had to hook up with movements -- had to become a movement, in fact, that could get along with the AFL-CIO's old usual suspects, environmentalists, shaggy green types, Naderites and the like. The unions showed they had some electoral clout in 1996 and 1998. So now, into Seattle, in body and spirit, rode those Democrats who have felt crowded out during most of the Clinton administration -- not the leaders, but the people. These folks, who have to be the bulwark of any successful Democratic campaign next year, are the ones most queasy about the WTO and the wheel-greasing approach to economic reality that it largely represents.

By declaring that the lion's share of the demonstrators have their hearts and minds in the right place, Clinton has made a bid for their residual loyalty. But now he and his administration have to deliver. The Sweeneys and Greenies are tired of waiting their turn.

So the Democrats' problem remains: The Sweeneys and Greenies in the Democratic party want corporate power curbed; the money wing is corporate power and does not look forward to being curbed. The interesting exercise of being the head between these two particular wings has proved most successful when the Republicans have played their role as straight-ahead ideologues. The Democrats' happiest memory has to be that the Republicans have come to their aid before -- when they tried to shut down the government and, in the process, shut down the Gingrich revolution itself. But even Republican stupidity isn't eternal.

The Republicans, after all, don't have the Democrats' problem. For George W. Bush and most of the Republicans, economic problems are child-simple. "Trade is freedom," Bush said in Iowa Wednesday. "Trade yields freedom because of the marketplace and its promise and its potential." That's that! And might there be any downside? "I readily concede there may be an instant in time where someone has been pained by free trade," Bush said before going on to repeat the mantra shared by most other Republicans, as well as Clinton and Gore (usually) and Bradley: "If we wall ourselves off from the rest of the world, I believe it will lead to an economic downturn, and an economic downturn will hurt workers a lot worse than free trade." Bush insisted that he would devise trade policies that would protect the environment and worker rights, while rejecting "onerous" rules.

Nice trick. But will the Democrats offer a choice or an echo?
For the moment, then, Clinton has turned a certain embarrassment into a useful -- if awkward -- straddle. But a straddle that awkward is likely to get harder to sustain. Al Gore's legs are probably not rubbery enough. Despite Clinton's last-minute heroics, smart Democrats will listen keenly to the alarm bell sounded in Seattle. In the years to come, with Clinton off the field, they may find straddling too awkward to manage.