The genie of desire

When I finally kissed a man in Africa, he ran away. 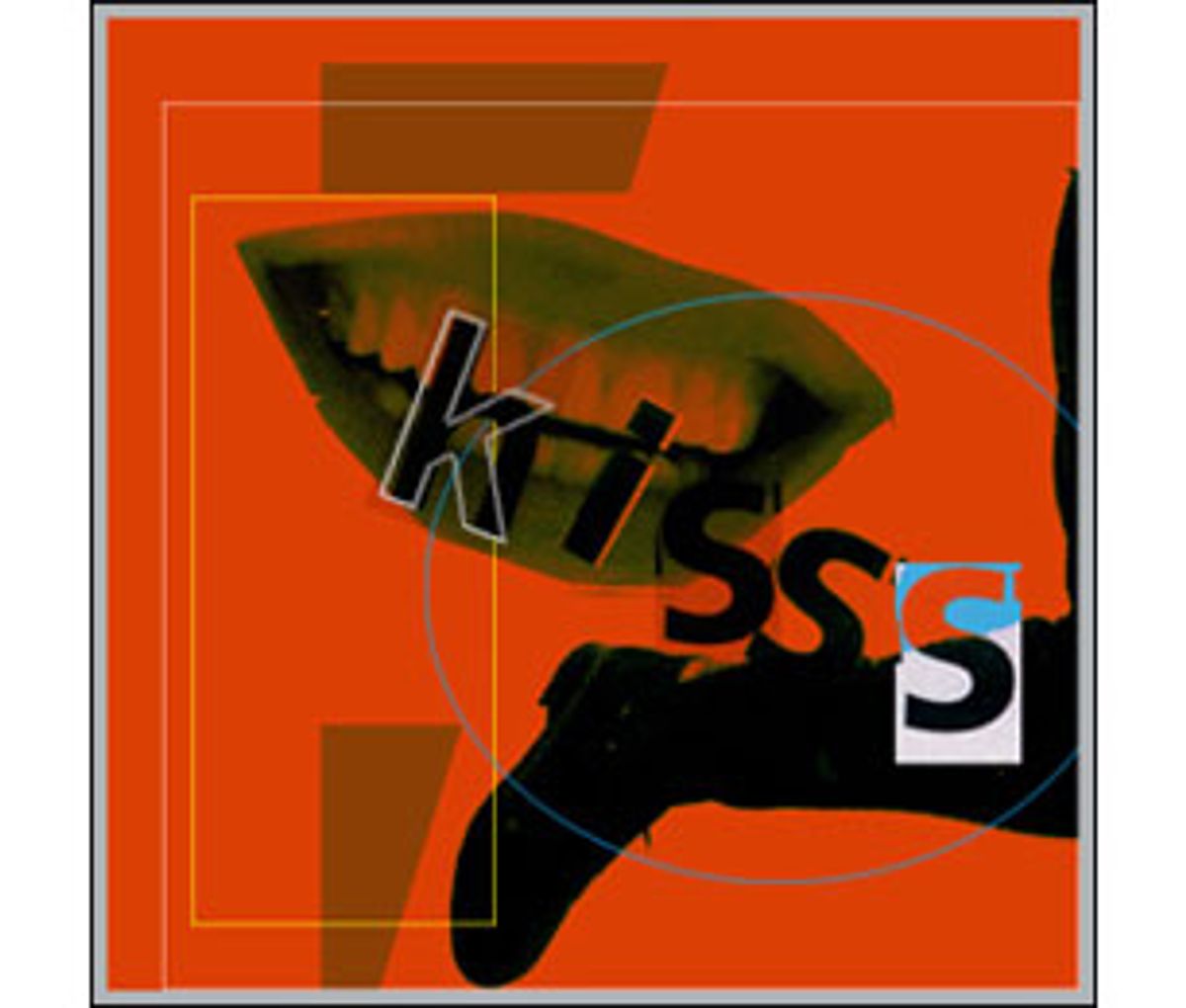 Far more annoying than the men's incessant overtures, however, is the inexplicable fact that I feel guilty when I reject them. I remember an incident years ago in Baden-Baden, when an Italian guy I had met at the youth hostel wanted to go hiking with me. I said no, because he was already getting touchy-feely, and I knew I'd be fighting off his advances before we rounded the block. He reproached me with, "You must take risks when you are in a foreign country. Otherwise you miss it all."

Clearly this feeble attempt at persuasion was a garden-variety example of the depths the male species can sink to in its tireless quest to self-perpetuate. We know this, right? And yet, in spite of this knowledge, in spite of years of feminist education (well, not so many years -- I was only 19 at the time), I tormented myself for days, wondering whether I was cheating myself out of too much life.

In another instance, a Swedish man whom I'd rebuffed asked me why I was creating artificial barriers between body and mind. We liked each other, why shouldn't we make love? And although I knew he was a New Age clone whose recycled arguments went all the way back to John Donne and "The Flea," I had to endure the nattering of my own mind for days, wondering whether there was something wrong with me, whether I was an ice empress, incapable of passion.

These things, and more, make a shaved head and robes seem like blessed relief.

But anyway. After nearly seven months of solo travel through Europe, Morocco and West Africa, I was convinced that there was no tactic known to the Y-chromosome that could surprise me. Then I met Jimmy Brahima.

"You are very interesting," he told me after less than five minutes' acquaintance. "Très, très interessante. Please, can I take you to bed?"

"No!" I shouted, furious and bored and disgusted. "No no no no no!"

We were on a darkened street behind the stadium in Bobo Dioulasso, Burkina Faso. I'd arrived that day from the capital city of Ouagadougou, after a long bumpy ride in a packed minivan. My plan was to stay the night, visit Bobo's famous mosque, then move on to Mali. Since I was always pushing myself to maximize my cultural experience, I'd gone to the stadium to see a youth choir concert, but there was no concert. Tired, headachy and near the breaking point, I'd been walking around in circles for almost an hour, trying to find the way back to a hotel whose name I'd forgotten. Along the way this irritating companion had attached himself to me, like something unseemly sticking to my shoe.

"Shhhh ..." he looked around, embarrassed, but there was no one to hear. He leaned in for a kiss. I sidestepped him so quickly he almost fell.

"Don't touch me," I said between gritted teeth. I was about to follow it up with a command to get the hell out of here, when he startled me by suddenly backing up about 10 yards. He did it so quickly, bouncing backwards in tiny steps like Charlie Chaplin, that I giggled with surprise.

From that distance he shouted the following pronouncement: "If a woman tells me not to touch her, I don't touch her, because I don't know what she is."

"What do you mean?" I asked, mildly intrigued.

"Oh yes. There are so many genies walking around. They appear to be human, but when they want to, they can grow huge."

"Are they all women?" I asked.

"No, there are males too, but the males don't show themselves to men." He looked at me speculatively, then continued. "If a genie is angry, it goes like this." He made a powerful sucking sound through his teeth, lips parting slightly to let the air sing through.

I tried to imitate him, but instead sputtered and drooled like a geriatric camel. I struggled to look forbidding, but laughter twitched the corners of my mouth uncontrollably, and soon I was cackling so hard I could barely breathe. After a moment Jimmy joined the escalating gigglefest until we were both bent over and gasping for air. Jimmy moved closer again -- I guess he figured I couldn't possibly be a genie with such a wimpy capacity for hissing. Either that or I was an astounding bluffer. He demonstrated the sound a few more times, and with some practice I got it.

"Please," he said, "let us go to the bar for some beers. Afterwards I will help you to find your hotel."

Riding the wave of goodwill, I accepted.

"If you ever need to threaten a man, make that sound and he will run," Jimmy counseled me as we made our way through the darkened streets.

I promised to keep that in mind.

"I worry for you, une petite fille traveling alone."

"Don't worry about me," I said. We'd reached the bar, which had an outdoor courtyard with several wooden tables where African men in both Western and traditional clothes sat drinking, laughing and shouting. I slid onto a wooden bench.

"But I do worry. Such a little girl. You need protection." Jimmy himself was dressed in spanking new blue jeans and a silky black button-down shirt. I half expected to see a gold chain around his neck. His face, seen for the first time in the light, was strikingly handsome in a sleek, chiseled way, with high cheekbones and thick-lashed dark eyes. I already regretted having agreed to a drink.

"I knew it." Jimmy leaned forward, his eyes wide and eager. "I could see it. Please, will you tell me your secret?"

I laughed. "There is no secret."

"You should tell your brother. Tell your friend. Teach me."

"No secret. I'm trained in self-defense," I said.

"Self-defense?" He lowered his voice to an excited whisper. "You mean you can ... disappear?"

"Disappear? No -- no ... Self-defense -- I can defend myself. Use my hands and feet to disable someone, knock him out."

He looked at me reproachfully. "I wish you'd tell me the secret. Don't be annoyed. You frighten me. I don't know what you are."

I shrugged helplessly. "I don't know what to tell you."

"Please. Let us agree. I will tell you a story of my friend, who met a genie, then you must tell me what you are."

I nodded and took a long swig of beer. I extended my hand. "Deal."

Gravely, he shook my hand. He looked at me for a long moment, then began:

"He saw her here, at this bar, sitting alone at a table. She was a beautiful fat African woman. She was dressed in expensive European cloth. He himself is so skinny, with one leg shorter than the other, and not rich. Normally he would never speak to a woman like that, but her eyes stopped on him, and she smiled and nodded her head. He went to her and offered to purchase a drink, but she said no. She asked if she could go home with him instead.

"They walked to his house, but every time he reached for her hand, she said, 'Laisse moi,' and pushed his hand away, just the way you pushed me away before. Every several steps she asked him, 'Where is your house?' He asked her why she was in such a hurry to be there, but she only said, 'I need a place.'

"When they finally arrived, she almost ran to the door. Inside, he tried again to pull her next to him, and she went 'Fffffft!'"

Here Jimmy made the sucking sound, violently, his hands in the air and his eyes wild.

"Then she started undressing," Jimmy continued. "She took off one skirt, then another and another and another, then shirts, one, two, three, until there was a pile of 100, 200 shirts lying on the floor. The room was filling up and my friend could not breathe. He ran for the door, but the woman begged him not to leave. 'Stay!' she cried. 'Stay with me!'"

"But my friend was too frightened. Even though she was the most beautiful woman he had ever seen, he opened the door and ran down the street to the house of his cousin. He remained in his cousin's house for two weeks. Finally he went back to his place. Everything was normal. No clothing on the floor, nothing. But from that moment on he was impotent.

I stared at Jimmy, entranced by his fine cheekbones, expressive eyes and wide, elastic mouth. I gulped at my second beer.

"Ma soeur!" he said eagerly, taking my hand. "Surely you can trust me. Have you ever in your life met a nicer person than me?"

"Where? In America? Ghana?"

"Lots of places? No. There is no nicer person than me. How can you say someone is nicer than me? When you told me not to touch you, didn't I say 'yes madame'?"

"Yes, but only because you were afraid of me. A really nice person doesn't ask a woman to sleep with him when they've only known each other for five minutes. Especially not when she's alone in a dark place."

"You must talk more quietly; you're talking very loudly." He eyed a man at the next table. "I was just making several options available to you. You never know what a person wants to do. I said, do you want to go to the concert tomorrow, to the museum, shall I go with you to the market? You said no. I said you are very interesting, can I take you to bed? You said no to that, too. I said all right. I was only giving you choices."

My head was spinning from the beer, and I started to laugh. The day's heat and exhaustion lifted off me, and I felt giddy and weightless. So what if I couldn't find my hotel that night? I'd surely find it in the morning, when it was light.

Perhaps I am a genie, I thought, filled with hidden powers, and the thought made me feel sexy, reckless. Something moved inside, not unlike the sensation before an impulse purchase, a rash, against-my-better-judgment stirring, a heart-knock of desire. I was lonely, too -- why did I always deny myself? Whose outdated ethic was governing me? What exactly was I defending, and why? Here was Jimmy, a physically gorgeous man, and vital, creative, alive. I could almost feel the heat of his hands against my body, the long, smooth journey of my fingers down his back. Oh God, it had been so long ...

I leaned forward and kissed him on the mouth.

"You want to know what I am?" I asked softly. I was about to follow it up with something flirtatiously ironic, when Jimmy quickly scooted back to his bench and stood up.

"Please," he said, "the bartender, he knows all the hotels. He will help you. Please be kind. Don't watch me. Don't follow me. Please."

And Jimmy was down the street and around the corner before I could tell him that of all my roadside suitors he was the lucky winner -- that I was no genie at all, just a tipsy human female ready to step off her pedestal and seek a little comfort far from home.

Tanya Shaffer is a writer and actress who lives in San Francisco. Her most recent solo show is "Let My Enemy Live Long!"