Breaking up is hard to do

"Buffy" hits a creative funk, but its spinoff "Angel" is in the groove. 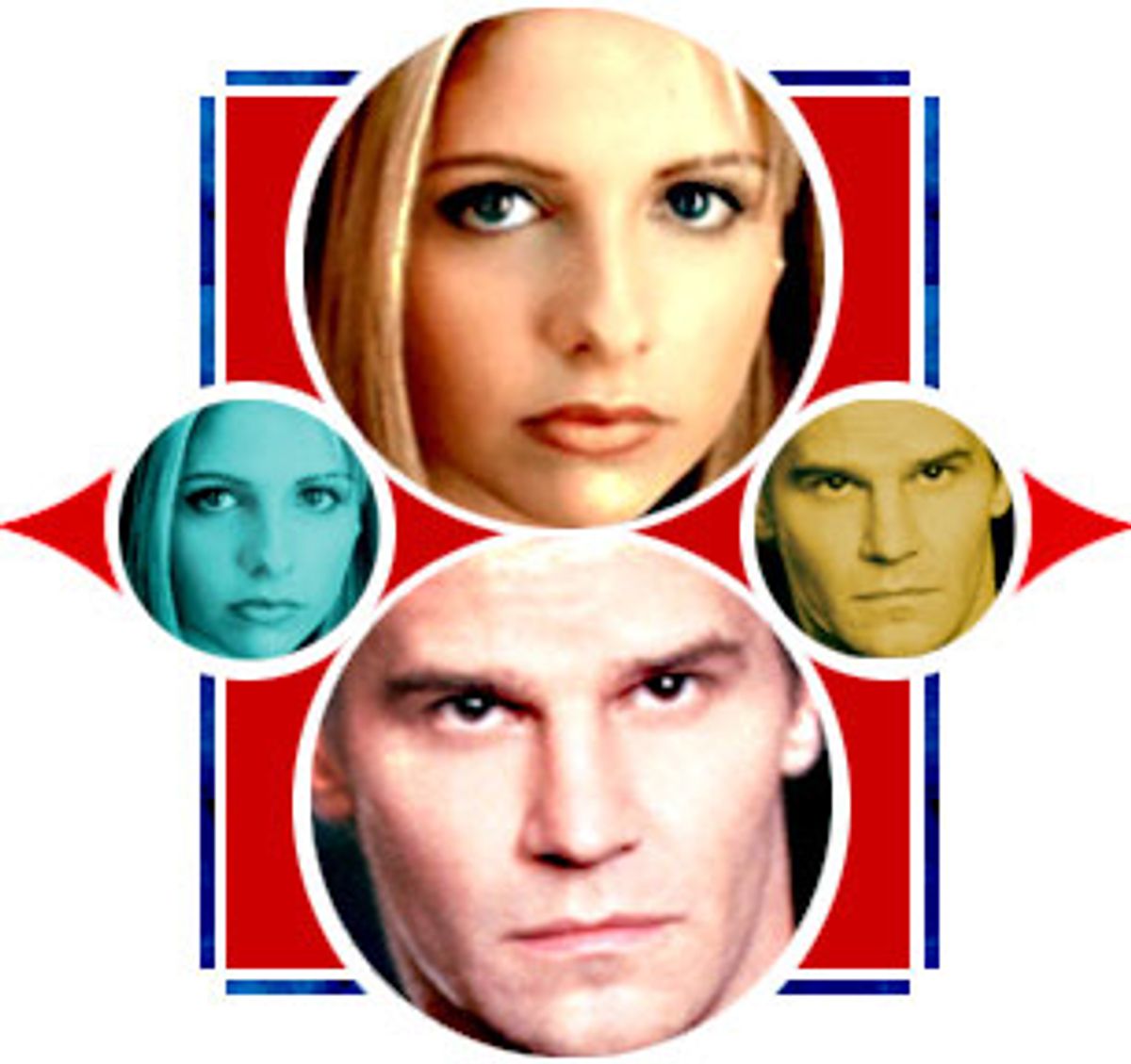 Freshman year of college is a big, scary, disorienting whirl -- even, apparently, for a girl who can stake vampires with no fear and karate-throw demons three times her size. Everything about this
Buffy-on-campus season of "Buffy the Vampire Slayer" feels out of whack, out of sorts, just plain out of it. Buffy (Sarah Michelle Gellar) was special in high school, strong and sure of her demon-fighting powers. But at UC-Sunnydale, she's
just another freshman, and a blue, overwhelmed one at that. So far, we've watched her struggling with tough classwork, annoying roommates, pompous professors and horny upperclassmen, all while she's still
emotionally drained from a wrenching breakup with her true love, Angel. My worst fears about where the show would go, post-high school, are being realized. It's "Felicity the Vampire Slayer."

If Sunnydale were the real world, then depicting Buffy as Insecure Freshman Girl would have been the right way to go. But this is not the real world; it's a TV show, and a great one, and it's a bummer watching its
energy level sag. The multilayered dazzle of "Buffy" -- aching high-school angst, intense Gothic romance, cheesy horror, zippy humor, gorgeously delineated characters -- has given way this season to sluggish
story lines that just can't seem to pick up steam, and college-as-fresh-hell metaphors that barely rise
above clichi. So far, we've had Buffy stuck with the dorm-mate from hell, who (no surprise) really was
from hell; and Buffy discovering that beer tastes great but makes you stupid, or in this case, devolves you
into a caveperson. What's next on the list? An affair with her professor? Please, Joss Whedon and David
Greenwalt, don't make it happen (unless, of course, the professor is Buffy's tweedy mentor Giles, but then, that would be a whole 'nother show).

And speaking of Giles (played with still-waters-run-deep reserve by Anthony Stewart Head), the poor man
has nothing to do this season, now that Buffy is 18 and he has been relieved of his Watcher duties. He's currently being used mainly as comic relief -- he's an unemployed, overeducated, bookish Brit discovering
the guilty pleasures of American daytime television and junk food. The season's malaise even extends to Buffy's plucky pal (and sorceress in training) Willow (Alyson Hannigan), who is also attending
UC-Sunnydale. Willow has broken up with her guitar-playing werewolf boyfriend, the unflappable Oz (Seth Green has departed the show), and her grief is bottomless: "I feel like I've been split down the center and
half of me is lost," she wails.

OK, life after high school is full of heartache, transitions and dashed expectations -- we get that. But where is the heady thrill of discovery, the joy of being on your own? Buffy and her pals seemed more worldly --
and were a lot more interesting -- when they were high schoolers saving their town from evil. It's not a good sign that the liveliest moments this season have belonged to Spike (James Marsters), the sardonic
platinum-blond British vampire, and even he isn't completely himself lately.

Spike was captured by a covert campus demon-hunting group called "The Initiative" and implanted with a chip that prevents him from killing to feed. He escaped, but he's now impotent and domesticated and remains shackled in Giles' apartment, where he's fed pig's blood through a sippy-straw (Willow calls him "the undead English patient").
Spike and Giles watch the telly and snipe at each other like Felix and Oscar in "The Odd Couple," which is, I admit, pretty amusing, but a comedy routine does not a season make.

Maybe this year's slow setup will eventually result in Buffy finding her new place in the world and emerging a stronger, wiser woman. Having sworn off bad boys (maybe), she's now on the verge of a
relationship with Riley Finn (Marc Blucas), the blandly cute teaching assistant in her psych class. Alas, she has no clue that Riley is a member of the fascistic Initiative, which is headed by Maggie Walsh (Lindsay
Crouse), Buffy's chilly, formidable Psych 101 professor (on the first day of classes, the prof warned her students that all the teaching assistants call her "the evil bitch monster of death"). The Initiative's creepy
commando raids, and its vast underground base where demons and vampires are taken for experiment and study, are a bit too "X-Files"-y, too elaborately conspiratorial, for "Buffy" -- they're a far cry from the
show's usual agile humor and stealthy plot twists.

I sincerely hope we're being subjected to all this Initiative crap so that Professor Walsh can emerge as
Buffy's new nemesis. The instinctual, emotional slayer, who is in love with a vampire and kills the bad demons quickly and without cruelty, vs. the dispassionate, cerebral scientist with her death squads and
torture labs -- now that is a rumble I want to see. For the sake of everyone who was ever a college freshman, Buffy ought to kick that self-important, sadistic, grade-deflating academic's ass all over the quad.

While "Buffy" has been flailing, its spinoff series, "Angel," thrives; it's turning out to be one of the best new shows of the season. In "Angel," Buffy's vampire-with-a-soul ex has moved to Los Angeles so that Buffy can get on with her young life; he can't bear the thought of her saddled to a 200-year-old undead
boyfriend who can't have sex because of an ancient Gypsy curse. Angel wants to be good, to atone for his
centuries of bloodshed -- maybe then the curse will be dissolved. With the help of a half-demon, half-human
sidekick named Doyle (Glenn Quinn) and the former belle of Sunnydale, Cordelia Chase (Charisma Carpenter), who is now a struggling actress in L.A., Angel opens up a sort of supernatural private eye
agency where people being menaced by demons can go for help.

"Angel" and its star David Boreanaz get more assured, more haunting and more poker-faced funny every week. Indeed, "Angel" has more of the old "Buffy" vibe than "Buffy" these days, so you have to wonder:
Were Boreanaz and Carpenter that important to the show's magic potion? Well, yes. You can see it in the way "Buffy" has quickly attempted to fill the Cordelia void with another snotty, self-centered female
character (Emma Caulfield's Anya, a man-hating, centuries-old witch banished to live as a human in Sunnydale) to work Buffy's last nerve. You can see it in the casting of Blucas, a big, blunt-featured pin-up
type in the Boreanaz mold, as Riley, and in the way Riley gets tongue-tied around Buffy, just like Angel used to. You can see it in the defanging of Spike, who now fills Angel's role on "Buffy" as the vampire who
isn't so bad, once you get to know him.

And you could see it in the Nov. 23 "Angel" episode, "I Will Remember You," on which Sarah Michelle Gellar guest-starred. No installment of "Buffy" this season has captured the essence of the slayer's dilemma -- Buffy just wants to be "a normal girl, falling asleep in the arms of her normal boyfriend" -- as tenderly or movingly as this "Angel"/"Buffy" crossover. On "Buffy" this year, without the smoldering Angel, the
source of all her pain and pleasure (he deflowered her, before that no-sex curse kicked in), Buffy is not truly whole. And if this seems masochistic, well, aren't all of the great tragic romances?

In "I Will Remember You," Buffy visits Angel in L.A. to tell him off for skulking around Sunnydale (in the preceding "Buffy" episode) behind her back in order to protect her from an unkillable demon. In the middle
of their argument, another demon bursts in and in the ensuing battle, Angel is dosed with the demon's blood, which renders him suddenly human. For the first time in centuries, Angel has a heartbeat, a reflection and
an appetite (in his first official act as a born-again human, he ravenously pigs out on everything in the fridge). Most important, he can have sex again.

He and Buffy get (in the words of the grossed-out Cordelia)
"groiny," but it's soon apparent that there's a downside to a mortal Angel -- robbed of his superhuman strength, the guy is useless in a fight with the forces of darkness, which, by the way, are gathering for
"the end of days" (and I don't think they mean the Schwarzenegger movie).

Buffy and Angel may not like it, but they can't let matters of the heart (or groin) prevent them from fulfilling their destinies as vanquishers of evil. In order to keep Buffy focused on her slaying, and fearing
that she'll be killed in battle if she has to worry about him getting pounded into a pulp, Angel strikes a deal with "the oracles" -- they will erase the previous day, and make it as if Buffy and Angel's 24 hours of bliss
never happened. Buffy will stay pissed off and sad and get on with her life, and only Angel will remember their tryst -- only he will shoulder the burden of their lost love.

"I Will Remember You" was a sublimely weepy addition to "Buffy"/"Angel" lore; these two are fated to be together and you can bet that, eventually, in that final Very Special WB Crossover Event, they will. But for now, it's Angel who's getting the better suffering and brooding scenes -- he emerged from "I Will Remember You" more swoonily noble, more lost, than ever ("He doesn't even have a heart," wonders
Cordelia. "How can it be broken?"), while Buffy just seems all drippy-girly.

As the season unfolds, it's becoming more obvious that "Angel" is Whedon and Greenwalt's "adult" series (it's telling that Buffy and Angel's semi-nude groininess occurred on "Angel," not "Buffy"). The
touchy-feeliness of the "Angel" pilot, in which Doyle brings Angel a message from "the powers that be" decreeing that he "reach out" to humans in trouble and feel their pain, has been (thankfully) toned down. The
doom and dread quotient has been upped. And the writers have beautifully expanded on the show's themes of transformation and redemption, making all the characters, not just Angel, works in progress. Cordelia, the
pampered rich girl, is penniless and on her own and (to her surprise) liking it; she was even actually starting to care for the disheveled Doyle, who was besotted with her, but he was killed off in the Nov. 30
episode (note to Whedon and Greenwalt: What were you thinking!). Doyle started the series as a coward, but
he went out a hero, sacrificing himself to save his people, who were being persecuted by a Nazi-like movement of purebred demons.

In "Angel," as they have in "Buffy," Whedon and Greenwalt have married the supernatural and the mundane to create a richly textured show where evil isn't merely a spook-show device, but a dark part of the
characters' selves. "Angel" carries that theme further, using evil as a metaphor for addiction and vice. Angel and Cordelia (and Doyle) are struggling to let their better natures hold sway; they're in the hard
process of change, they long to become better, kinder, braver beings. Forget Roma Downey on "Touched by an Angel" -- Boreanaz's sensitive-guy vampire in the flapping black overcoat is the most soulful and spiritual presence on TV.