"Eve: A Biography" by Pamela Norris

As this remarkable survey demonstrates, for centuries the original hussy has given men a great excuse for controlling women. 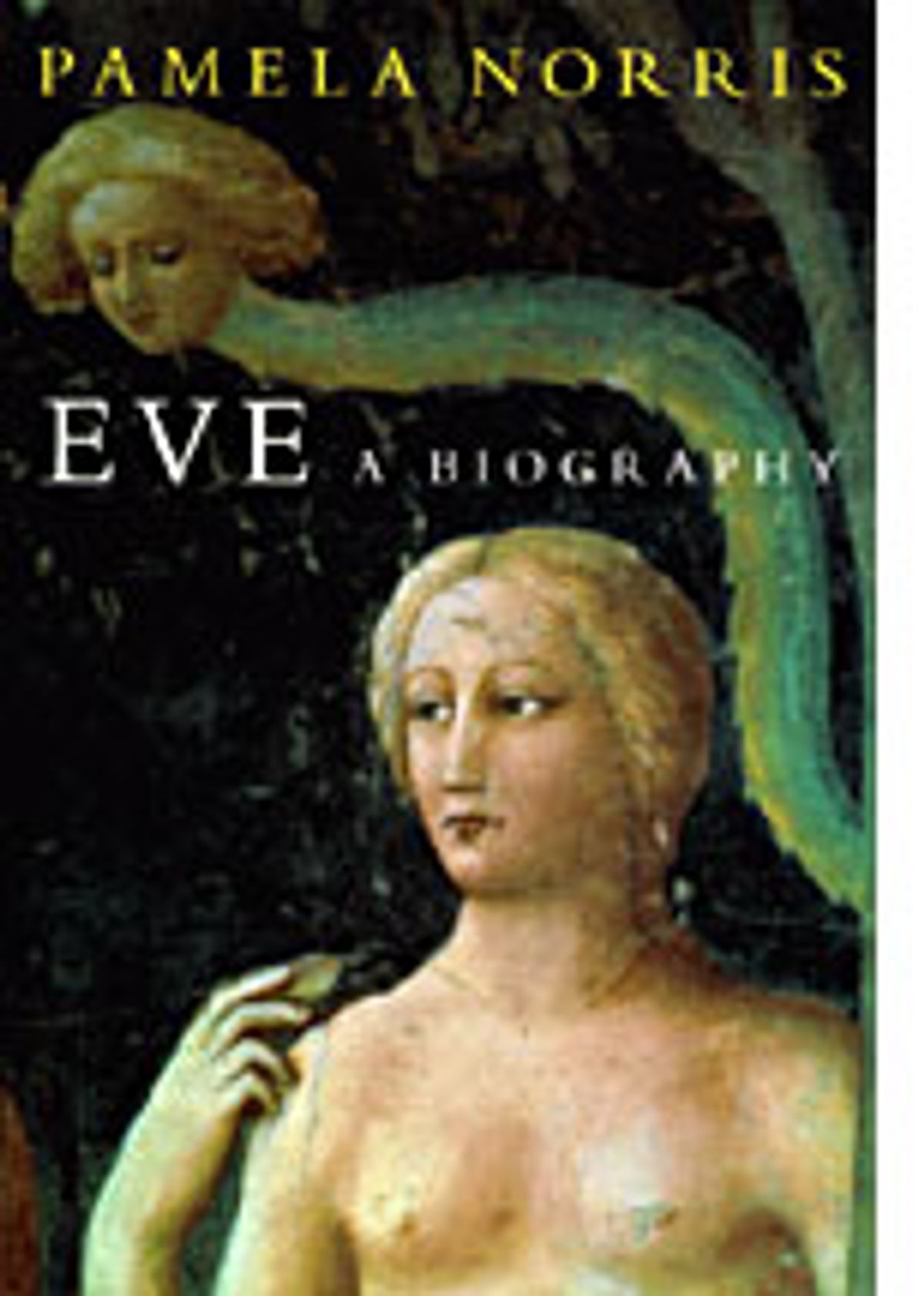 It's just a simple story -- a folk tale, basically -- and yet for 3,000 years the story of Adam, Eve and a wily serpent has been told and retold, interpreted and re-interpreted in a quest for answers to supremely difficult questions. The account in Genesis is full of holes: Why does God forbid Adam and Eve to eat from the tree of knowledge of good and evil? Is he lying when he tells them they'll die if they do, or does he change his mind after the transgression? How does Eve persuade Adam to eat the fruit? And the serpent that deceives Eve -- what's in it for him?

Much depends on how you view Eve, and it's safe to say that centuries of literature, art and theology have not been kind to her. Pamela Norris' remarkable new study, "Eve: A Biography," rounds up hundreds of commentators on the biblical first woman, showing that while every culture and every age lends its own flavor to her story, certain themes recur (Eve as sexual temptress, Eve as publicly shamed sinner); and that, what's more, Eve has stood in for all women: Her unfleshed-out actions in the Garden of Eden have been treated as an index of female behavior.

"Eve" is, in other words, a catalog of Western attitudes toward women -- territory both well explored and susceptible to tedious, naive anger -- but Norris' touch is at once playful and wise. She has organized her wealth of material in a way that feels authoritative but still loose and intuitive. In general she proceeds chronologically, from the composition of Genesis (around 1,000 B.C.) to the present, but she detours often to discuss relevant works of art, literature and philosophy.

Part 1, "The Making of a Bad Reputation," ranges through Eve's appearances in early Jewish and Christian tradition. To the Hebrew scribes and priests who wrote the holy books and the commentaries on them, Eve was most important as childbearer, the "mother of all living," whose fate cautioned women from wandering off the established path. Girls had to be kept within the fold, women encouraged to accept their lot of bearing children and submitting to their husbands.

Early Jewish writings, with their almost manic anxiety for controlling women's dress and cosmetics, did occasionally use Eve to represent a sexual temptation that the male libido is (conveniently) helpless to resist. But it was later Christian commentators who really ran with the sexually negative implications of Eve's tale. "Eve in Paradise was a virgin," Jerome decided in the fourth century; sexuality existed only once paradise was lost. With this conviction, the early Christians turned away from the idealization of family life, painting female sexuality as tainted and dangerous, and toward a new asceticism.

But the convent also offered women a respectable life outside wedlock. Norris works her way patiently through Paul and Augustine and the tales of female martyrs, finding an interesting measure of potential social authority for women who chose to devote themselves to the church.

But ultimately, Norris finds, Christianity -- in particular the Cult of the Virgin Mary -- doomed women to failure. Mary, who was considered the second Eve, "managed to remain at one and the same time perfect mother and virgo intacta," Norris writes. "This irresolvable fissure in female biological destiny meant that women were pledged to an ideal of behavior that they could never realize  It seems a curious, malignant, and ridiculous sentence." Here we can see a distinct, if understandable, crack in Norris' otherwise unflappable demeanor. Immersing oneself in centuries of Christian thought on female sexuality can give even the best-dispositioned author a headache.

Theology, clearly, is not the practical-minded Norris' brew of choice, and you can almost feel the weight lifting from her shoulders in Part 2, "Fantasies of Eve," in which she turns her attention to literature. Whether discussing Milton, Hawthorne, Elizabeth Barrett Browning or Ursula K. Le Guin, Norris is a consistently deft and imaginative critic. Eve's appearances through the centuries -- especially in works by women seeking to defend Eve's quest for knowledge -- provide Norris with fascinating alternatives to the Mary cult that she finds so irredeemably limited.

So much can go wrong with the kind of century- and continent-spanning thinking Norris does in "Eve" -- her book could easily have collapsed into a weak, women's-studies mush of mean males and virtuous females. She pulls it off so beautifully, I think, because overall she's more sad than outraged at the tragically limited lives most women have been relegated to. She understands that much, though not all, of the limitation has had to do with brute physical realities -- the prestige that was attendant on men's greater physical strength in the pre-industrial world, not to mention the perils of pregnancy and childbirth and the relentless work of rearing children. Eve's endlessly mutating story, Norris shows, demonstrates both the terrible way that harsh realities can determine our possibilities and the human capacity to transform -- slowly.