The editor of the Onion unleashes two collections of anti-humor laced with cyanide. 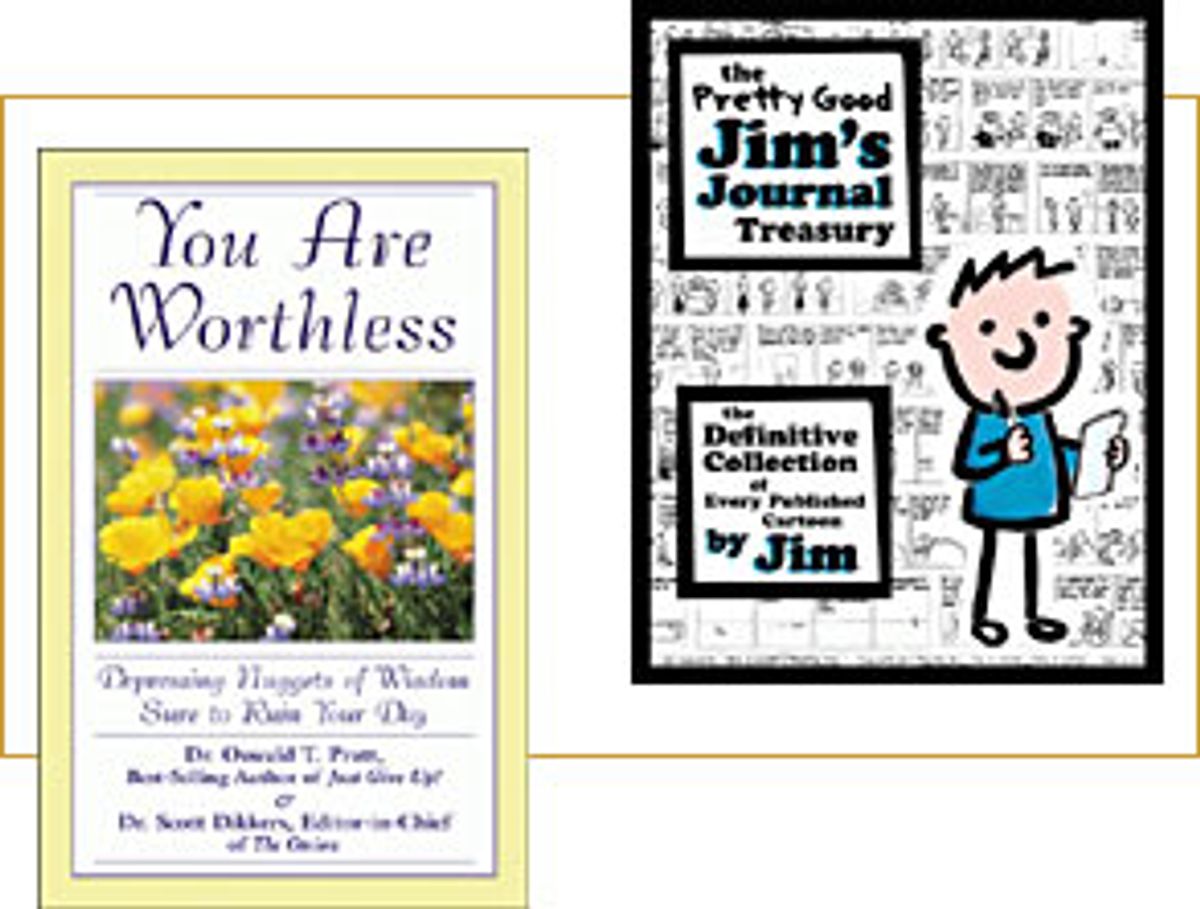 As editor in chief of the Onion, Scott Dikkers turns media smugness inside out and leaves it there to bleat. The weekly anti-newspaper -- whose online edition, theonion.com, has garnered the operation its deserved cult status -- began humbly as a Madison, Wis., humor rag and now provides the world with its special brand of absurd government statements, nonsensical graphs, sly headlines and pathetic profiles. This year, the Onion's bestselling collection of made-up front pages, "Our Dumb Century," further elevated Dikkers' satirist-about-town status. Yet it appears that he still hasn't done enough. The oft-quoted editor recently published two more books, thus creating a discussable oeuvre in the space of six months. Now that we live in Dikkers' world, what does he want from us?

Well, for one thing, he'd like us to quit being so goddamned cheerful. His newest creations, "You Are Worthless" and "The Pretty Good Jim's Journal Treasury," are not for those on the slippery end of the mood-swing seesaw. Undiluted by the Onion collective, Dikkers' humor is strong stuff: pastel Sweet Tarts with a cyanide kick.

"You Are Worthless" is a dark little book in the vein of Jack Handey's "Deep Thoughts," Matt Groening's "Life in Hell" and, within the Dikkers landscape, raw Onion lectures on stain removal and marital health. Writing as Dr. Oswald T. Pratt ("best-selling author of 'Just Give Up!'"), a sad-sack psychiatrist who sends every patient he sees into fits of further despair, Dikkers takes everything that Hallmark holds dear -- love, family, work, friendship, self-esteem, spirituality, pets -- and efficiently uglifies it.

But the advice (presented in boilerplate self-help format with large type, italics and curlicues) comes in several flavors. Some of the dictums are pure elementary-school meanness: "You're fat." "Nobody likes you." Others tend toward the preachy: "Our world is nothing but 95 percent poverty-stricken, bloated-stomached babies and 5 percent money-grubbing pricks. In your lifetime, you've only met people from the latter category." Many more would scorch the glaze off Kathie Lee Gifford: "Mask the pain with drugs." "Let's sit down and actually count the genuine, true friends you have. It's not that many, is it?" "Oh, except Jesus. He's your friend. Why don't you call him and see if he wants to hang out?"

Many of Dr. Pratt's nuggets are sick in the best way -- but you need to start off in a pretty good mood to chew the harsher ones without wincing. If you rush, you'll miss out on the bizarre, the paranoid and the wonderful: "When they try to give you pills, fight them with all your strength." "If your cat were just a little bit bigger, it would kill and eat you." And my favorite: "Are you in love? Sucker."

Fortunately, there is no need for such a book among the denizens of "Jim's Journal," the comic strip that Dikkers drew for 10 years before his editorial tenure began. This collection will introduce legions of Onion guzzlers to a delightful cartoon, which even at its peak ran in only a few dozen college newspapers. Here's the concept: We're reading the daily diary of a young man named Jim, whose life is pretty much unbroken by significant events. Dikkers' bold-lined drawings are exactly as detailed as they need to be -- which is to say, not very.

So what's there? A little fuzz-haired guy with stick legs and no mouth who goes to college; works at McDonald's, a copy shop, a grocery and a bookstore; and has a roommate (the hyper Tony), a pal (Steve, whose jokes in a deliberately jokeless strip are necessarily lame), a girlfriend or something (Ruth, twice Jim's size, perpetual smiley face) and a cat (Mr. Peterson, who comes closest to being Jim's soul mate). All the while, he narrates with remarks so dry they float off afterward like tumbleweeds: "When it was over we turned off the TV, sat around and didn't say much of anything."

Dikkers slips in a few straight essays between his protagonist's (nominal) phases, explaining how he used anti-humor to parody a genre he'd never really liked and noting that Jim is a Taoist slacker whose observations resemble Camus'. But you need neither a higher consciousness nor irony specs to find pleasure in "Jim's Journal." Except for a jarring plot development near the end of the strip's run, Jim's serene unchangingness is hypnotic, clever, poignant, sublime and, oddly enough, funny. If there are enough Jims in the world to balance out the Dr. Pratts, I'd say we're doing pretty well.