Memories of an Aggie Bonfire boy

Texas A&M's annual ritual, which killed 12 this year, is not just a football rally. It's a homoerotic rite of passage. 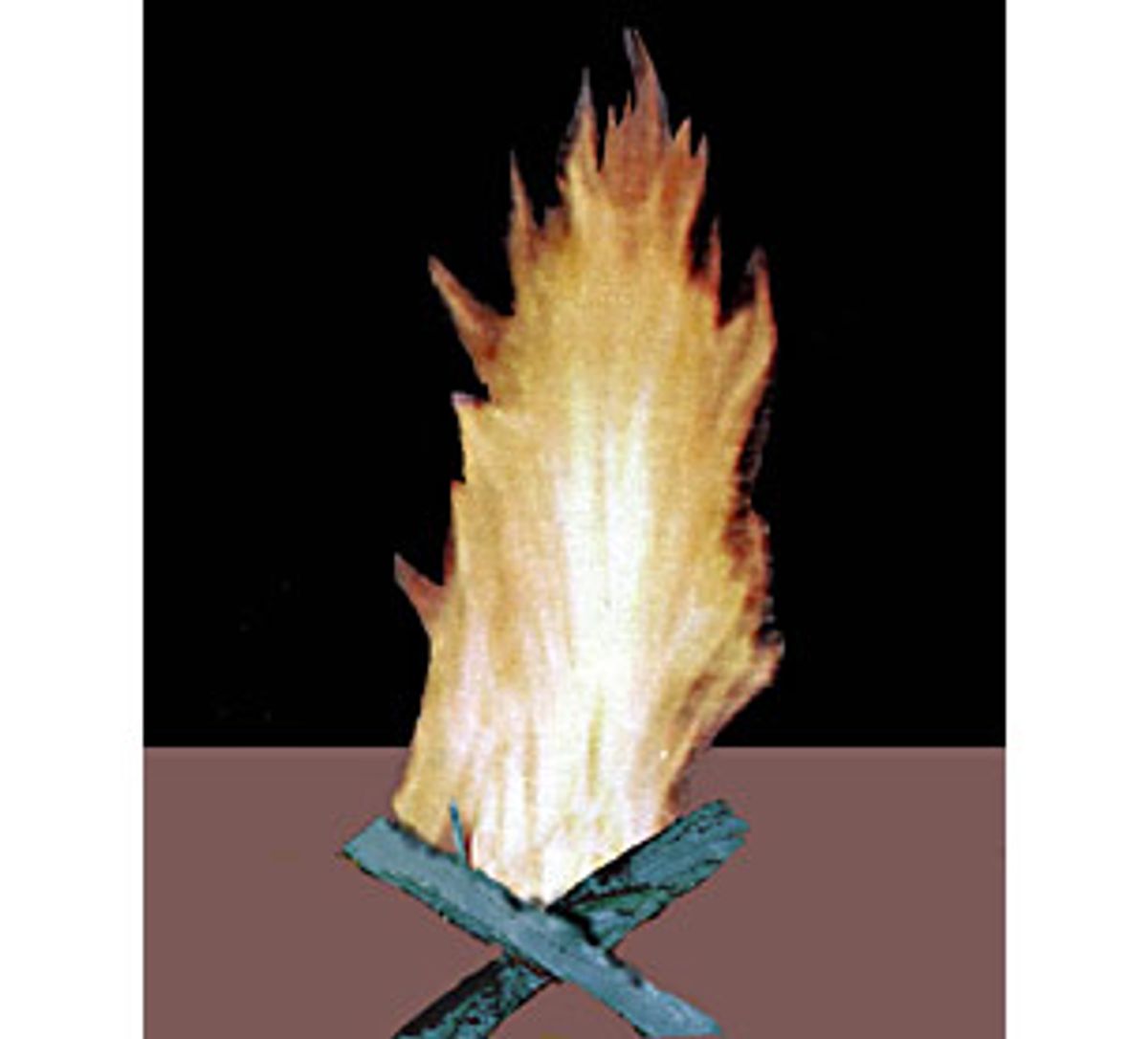 It's an image I'll never forget: My roommate, a 6-foot-6 good old boy from East Texas, stood 40 feet up on the third tier, pissing on the back of one of our chief tormentors during "push," the height of bonfire building season. The junior, who was on the second tier and trapped 30 feet off the ground, could do little but endure the steady stream of my roommate's righteous piss and inspired obscenities.

It was one of the hundreds of Byzantine traditions governing life in the Texas A&M Corps of Cadets -- up on stack, anything goes. Translucent against the Friday-night lights, the urine cascaded 10 feet and bounced off the back of the hated junior, forming a perverse golden halo around his hunched body.

This pinnacle of Sedgwickian (as in queer theorist Eve Kosofsky Sedgwick) homo-sociality typified the course of my four fall semesters at Texas A&M University. It was a rite of passage for the hundreds who participated; as each log was added, another second of our extended childhood was gone. Unfortunately for Aggies everywhere, this childhood came to an end on Nov. 18 as the 60-foot stack collapsed, trapping 28 students in the falling oak and killing 12. An unprecedented "unity rally" followed the next week on the steps of the capitol in Austin. Thousands of University of Texas students and Aggies attended, their grief eclipsing a notoriously bitter rivalry that extends beyond the football field, as alumni compete in the workplace and boardrooms.

The 90-year tradition was spawned when an ebullient group of cadets stole flammable furniture (including an outhouse) from around campus and razed it one night. In 1969, the stack captured the world record for the tallest bonfire ever at 109 feet, 10 inches. For years, the structure was viewed by campus radicals as a potential fire hazard and by campus environmentalists as a conspicuous embarrassment. But the vagaries of its design and construction had never really been called into question. The lighting of bonfire was cancelled only once, in 1963, when President Kennedy was shot just up the road in Dallas a few days before it was set to burn. Ostensibly, the bonfire symbolizes the A&M student body's burning desire to beat the hell out of T.U. (as Aggies refer to the University of Texas).

In reality, Bonfire is a tribute to the traditions of a quasi-military university (A&M was a military institution until the 1960s). More than that, Aggie Bonfire is an annually renewed monument to the supremely male subculture that produces it and a pagan ritual that serves the most primal of instincts: dancing naked around a raging fire in the archaic night, chanting for the death of your enemies. It is a burning sacrifice to the gods of Texas football and a searing symbol of the bond that transcends sexual love and unites fraternities of arms.

My relationship with the behemoth, a Saturn V rocket pyramid that stood 200 yards from our dormitory, was always a rocky one. "Push" required 24-hour participation from the Corps of Cadets for one week every November. I grumbled bitterly for the four Saturdays every fall semester we were required to rise at dawn and head out to local forests and fell the trees that make up the bonfire. Despite the protests of campus liberals that Bonfire was a waste of trees, some foresters contended that such clear-cutting actually promotes healthier forests by giving younger trees more breathing room. I wore my "virgin stripe," a white piece of athletic tape around the right leg, that all first-year Bonfire participants wear with pride. Along with my buddies, I spent all night "fucking" 500-pound oak logs -- carrying them to the base of the stack where a crane would pick them up -- and watched the sun rise around the ramparts of the great stack.

I did my time. But my time wasn't up yet. Our sophomore year, my roommate (ol' lady in Aggie parlance), began spending most of his free nights in the chilled air out on the bonfire field. Eventually, he worked his way to the third tier or "stack," wiring hundred-pound logs with baling wire to the centerpole, an unusual distinction for a young sophomore, earned by slogging through the slower early morning hours. He spoke ceaselessly of the glory and edgy abandon in the rarefied air up on stack. You could say anything you wanted and be whoever you wanted as long as it involved copious amounts of Copenhagen snuff, Carhart overalls and colorful rural analogies, with only gravity and time to answer to. Extended time up on stack produced a euphoric state, an exalted tunnel vision wherein this was the only possible existence and these boys your only possible friends. However, those moments were always fleeting: Dawn always came, the monastic Corps of Cadets lifestyle always got you down and finals inevitably followed three weeks after bonfire burned.

As individual waves are sometimes difficult for surfers to recount, so specific moments of Bonfire wash out in waves of liquid flame. Although its ultimate destruction was our aim, the corporate effort required to conjure it was what made it so magical. It was a wooden tower infused with the dreams, sweat and desires of a thousand vagabond males, set ablaze with surreal fire like a titanic burning bush. In recent weeks, many people, including university president Ray Bowen, have wisely asked if Bonfire's season has passed. Bowen swiftly cancelled this year's festivities and said a permanent cancellation of Bonfire is a viable option. Others have rallied for the tradition to continue, if only as a tribute to the 12 frozen in their youth by the prisons of oak.

At first blush, the bonfire seems like a Neanderthal obsession that serves only the good old boys who build it. As a scandalous tribe in a conservative state, A&M and the Cadet Corps have long been subjects for public crucifixion. In 1993, the corps withered under intense media scrutiny after several female cadets came forward with charges of rape and rampant sexual harassment. Evidently, the corps and Bonfire have changed somewhat, as there were numerous women Aggies working on stack during its nightmarish disintegration, including one who perished. Yet for many the beauty of Bonfire lay in its rejection of mom and smothering femininity and its glorification of shared hardship and manly ritual. Like any grand and imposing architecture, it is designed to convey power and imperious achievement. This point was further reinforced by the empathetic and heartfelt attendance at the memorial service by Gov. George W. Bush and his father, both former members of Yale's secret society Skull and Bones.

As I watched A&M narrowly defeat Texas in a game that seniors dedicated to the fallen 12, Bonfire struck me as much more than a strange college ritual. Like the fraternal bond among small infantry units in combat, with their late-night secret sharing and hidden vulnerabilities, Bonfire construction was a chance to push the limits, to hang in a rope swing 40 feet in the air, hurling profanities at your best friends and shivering in unison as a blue norther cold front kicked down from Canada. Like the Apollo missions to the moon and the teams that set out to scale Mount Everest, Bonfire is a Promethean pageant, a monument to man's tragic, hubristic rebellion against gravity and Mother Nature.