It takes place in the late 19th century, but the sexy feminism in this novel is very late 20th century. 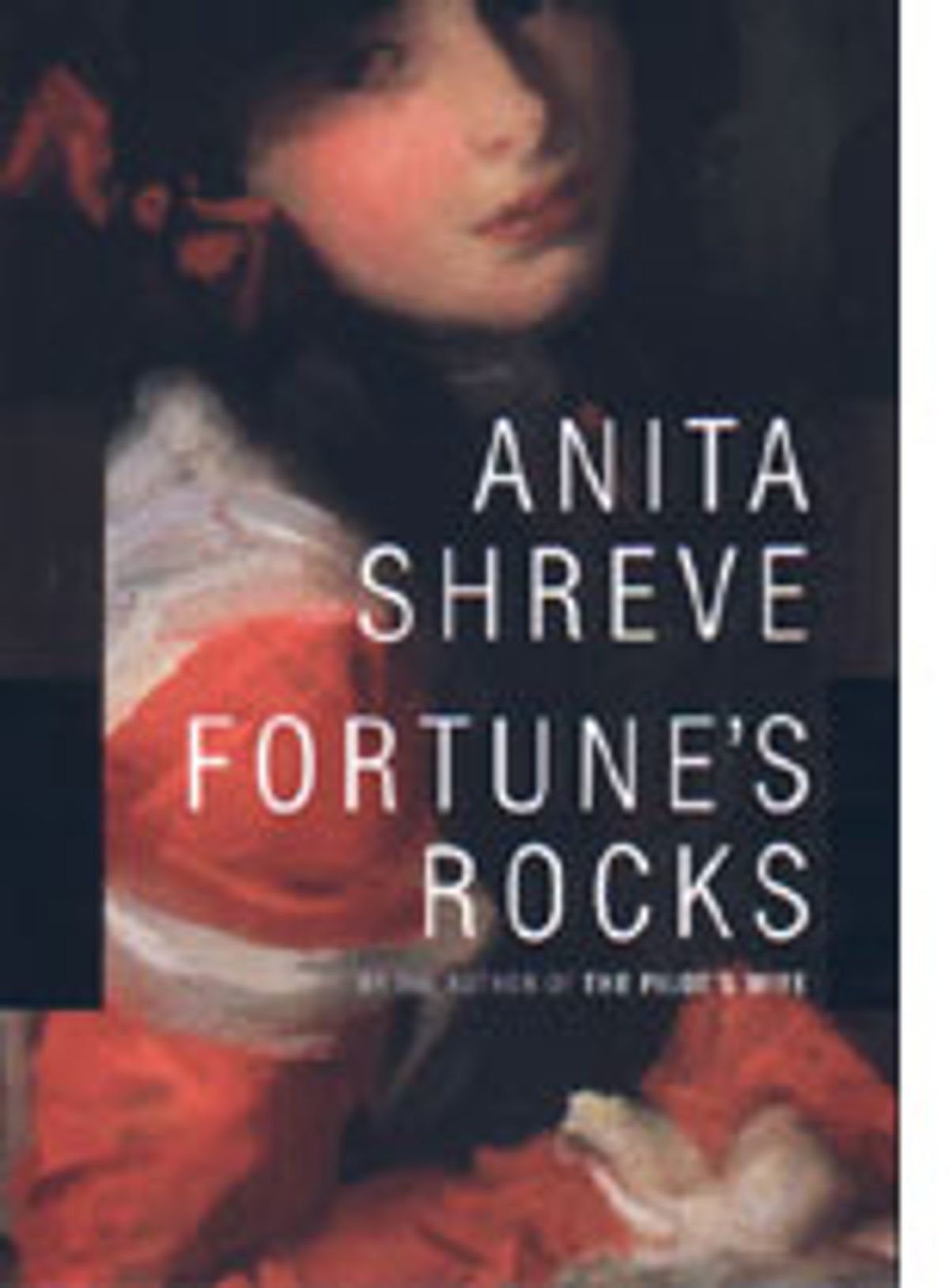 Reading Anita Shreve's latest book is like eating takeout: You get the salt and the sweet and the fat you're longing for, but afterward you can't help feeling a little disgusted with yourself for having gobbled it up. "Fortune's Rocks," Shreve's seventh novel, may be her most enjoyable yet (despite its many problems) and will no doubt follow her sixth, "The Pilot's Wife" (which earned the Oprah Winfrey seal of approval), onto the bestseller lists. But this novel really is fast food, though it's delivered on a silver dinner cart.

Shreve sets "Fortune's Rocks" in an elegant summer colony on the New Hampshire coast in 1899, and the self-consciousness of the narrative is such that at one point two characters debate the literary use of historically distant periods, one "taking the position that the social mores of a previous era might better highlight certain moral dilemmas of one's own time," the other noting that authors using the device "might simply have been drawn to the baroque language and richer color of an earlier period." Predictably, Shreve is doing a bit of both. She revels in period details, from the accouterments of turn-of-the-century upper-class life to the state of medical care in provincial slums; but while these trappings do create a pretext for fumblings with corsets in carriages, she has more earnest ambitions.

Her heroine, Olympia Biddeford, is the exceptionally well educated and self-possessed child of Boston Brahmins whose coastal home is a former convent (familiar to readers of "The Pilot's Wife"). During the summer of 1899, Olympia is 15, and like girls of that age in such earlier Shreve novels as "Where or When" and "Eden Close," she is ripe not only for sexual experimentation but also for true love, which she finds with a married 41-year-old doctor, John Haskell. As always in Shreve's work, love is measured by the extent of the lovers' physical ecstasy.

"Is this how it is?" Olympia asks John after their second rapturous assignation. "Is this the secret all men and women share?"

"Some have this," he says. "Not all. Most men do. There are women who cannot ever have this, who cannot allow themselves to have it."

It's a cringe-inducing scene. You can't help but recoil from the clichid explanation for the affair (Olympia is responsive; her lover's wife is not) and from the super-rich Harlequin Romance language. In any case, the two conceive a child, and Olympia begins the new century transformed from privileged daughter into social outcast.

Shreve writes in the present tense, as she has done before. The device is wonderfully effective for conveying the immediacy of emotions and sensations; unfortunately, it also prevents any separation between the voices of Shreve and Olympia, through whose eyes we see most of the action. If anything, Olympia is too reliable a narrator. At 15, she's a paragon of intelligence, beauty and sensuality. But this early perfection makes for stasis, and even in the later sections of the novel, which take her into her mid-20s and through maternity, employment and a custody trial, her character and perspective remain fundamentally unchanged.

Olympia's perceptiveness seems to reflect the author's more than the character's. She sees that beauty has ruined her mother's life, "for it has made her dependent upon people who are desirous of seeing her and of serving her ... Indeed, the preservation of beauty seems to be all that remains of her mother's life, as though the other limbs of the spirit -- industriousness, curiosity and philanthropy -- have atrophied, and only this one appendage has survived." Olympia herself longs for work and independence, although not for the exploitation that she knows most women workers face.

In this further, somewhat anachronistic idealization, Olympia serves as Shreve's bridge between fiction and the didactic journalism she published in the 1980s. Whereas several of Shreve's heroines have been victims, in "Fortune's Rocks" Shreve has decided to teach by example. Thus Olympia springs forth from her protected Victorian home a fully formed feminist with an innate understanding of the lessons that women learned in the consciousness-raising groups of the 1970s (which Shreve explored in her anecdotal 1989 study, "Women Together, Women Alone"). Olympia loves passionately, finds a helpful and challenging career and a similar mate and doesn't bother about religion or social strictures. While there were many 19th century feminists, Olympia is something else: a modern superwoman who has flown back in time to provide a historical role model for us all.

With author and character so conflated and the narrative stuck in the present tense, Shreve's storytelling becomes monotonous. The plot, however, stays exciting and highly emotional. Any novel combining period dress with three childbirth scenes, at least as many lovemaking episodes and a fierce debate over the rights of biological vs. adoptive mothers is going to be gobbled up by a significant female audience. Sadly, once your appetite for the drama is sated, there's not much left to enjoy. "Fortune's Rocks" will make a splendidly overheated movie.