The man who produced "Hard Copy" and "A Current Affair" remembers the gory, golden age of trash TV. 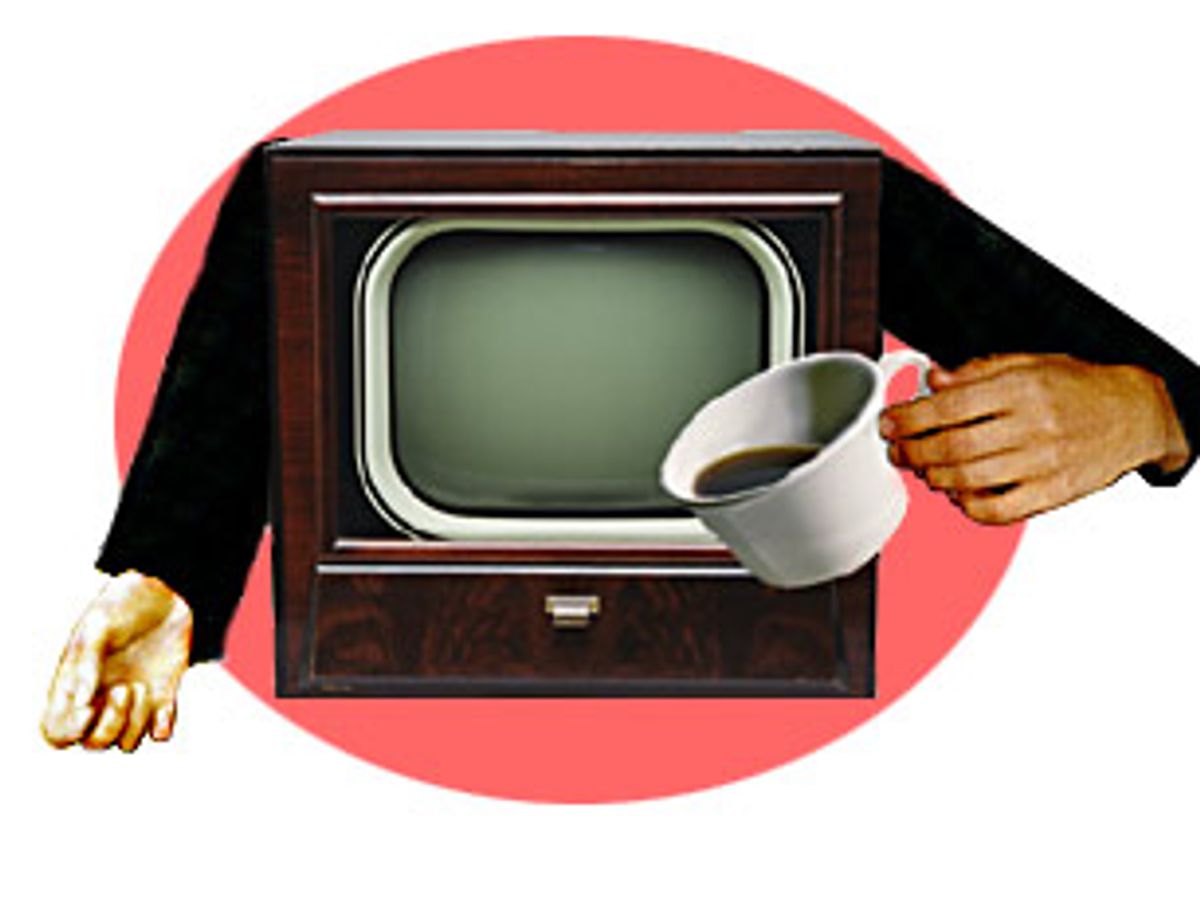 Tabloid television isn't dead. Shows such as "A Current Affair" and "Hard Copy" that thrived on news, gossip and scandal and brought the world dramatic reenactments and hidden-camera scoops were simply made redundant.

Burt Kearns was a producer on both of those shows. To hear him tell it, tabloid TV simply morphed into network news magazines, syndicated talk shows, ceaseless cable "news" coverage and those morning programs where the men all wear sweaters and the coffee is decaffeinated.

This may come as news to anyone who thinks tabloid TV was, in its purest form, all about Elvis sightings and ax murders. But for Kearns, who is in New York promoting his book "Tabloid Baby," an amusing if somewhat self-serving account of his years in the business, most people just don't get it. And that includes many of the programmers who imitated and co-opted the brass-tacks style of his early shows. "Nobody is covering those stories the way we covered them," he complains. "They're doing it the network way. They'll do a story on a UFO cult and cut to Keith Morrison at NBC and he's rolling his eyes. They still look down on people."

Kearns doesn't look that different from any number of Los Angeles TV producers. An affable, good-looking man in his early 40s, he's talking to me between appearing on a panel on tabloid TV and doing a radio interview. Appropriately, he has chosen Langan's -- an Irish bar in midtown Manhattan frequented by New York Post writers -- for our interview; so much of "Tabloid Baby" (which covers the period from Kearns' 1989 arrival at Fox's "A Current Affair" to the cancellation of Paramount's "Hard Copy" earlier this year) floats by on a sea of vodka. And Steven Dunleavy, a Mephistophelean character in Kearns' book, writes a column for the Post now. In fact, during the interview he appears at the bar as if conjured and signals the barman for a refill while lighting a Parliament.

"Joey Adams died today," says Dunleavy solemnly in his Aussie accent. He's wearing a corduroy jacket that nearly matches the color of his tan, and he sports a Porter Wagoner-style pompadour.

"No shit?" says Kearns. Adams, husband of Post gossip columnist Cindy Adams and aggregator (if not author) of a million one-liners, had been ill for some time. "Cindy was supposed to be on this panel with me last night but said she had family business."

There is a beat before he adds: "At least it was a real excuse."

With its hard drinking and quick cynicism, the world that "Tabloid Baby" limns is a sort of throwback to yellow journalism's days of yore. "In the worldview of 'A Current Affair,'" Kearns writes, "people didnt insult the Church, and sex was naughty -- the word unsaid, only spelled out, S-E-X -- values needed to be upheld, and all offensive images needed to be shown in as explicit detail as the lawyers would allow."

This combination of titillation and hypocrisy was imported from Australia by Rupert Murdoch, who staked his claim to the States when he purchased 20th Century Fox and the Metromedia TV stations in the mid-'80s and formed the Fox Broadcasting Corp. And when he needed news magazines, he didn't look to "60 Minutes" as a role model. He called on some of the same Aussie journalists who had reinvented the print tabloids for him there -- men like Dunleavy and Peter Brennan.

It is Brennan whom Kearns credits with splitting the atom of the tabloid-TV formula. "Now, you get back from a story, what happens?" Brennan would ask his charges. "You talk to people. You go to a bar and your friends say, 'What were they really like? What really happened?' If you give an answer that wasn't in the story, if the viewer or your mother can ask what the people in your story are really like, you've told the typical television version of the story. 'A Current Affair' tries to do the story between the lines and turn it into lines."

And according to Kearns, they didn't take their lead from the supermarket tabloids, either. The "Current Affair" staff scanned hundreds of newspapers for offbeat stories. They broke a map of the United States into five sections, like the five boroughs of New York, and assigned reporters to cover each. And, OK, they pissed off a number of celebrities in the process.

"It was never journalism," Kearns says of what they were doing. "It was what the Australians would call a piss-take on journalism." And it was much safer -- and more just -- to "take the piss" out of public figures like Steven Spielberg, whose divorce from Amy Irving got the "Current Affair" treatment, including clips from "Jaws" that equated interloper Kate Capshaw with Bruce the Shark. This resulted in a phone call from Spielberg to Fox studio head Barry Diller, which Kearns interprets as follows:

Kearns estimates that cost the company around $500 million.

In an effort to infuse the show with some semblance of respectability, Murdoch sent Anthea Disney to police the troops. Disney had worked her way up through the ranks of Murdoch's empire, starting as a Fleet Street reporter. She cultivated a tough-cookie persona (I worked for her myself at another venture) and she put the "Current Affair" staff on notice. She told Variety that she was under orders to make the show "more New York magazine and less New York Post." Kearns, who had advanced to executive producer, saw the writing on the wall and resigned to go to Hollywood and join the rival tabloid show, "Hard Copy."

Disney is one of many who may not be pleased at how they are depicted in "Tabloid Baby." Her stated desire to class up "A Current Affair" clashed with some of the excesses that occurred on her watch -- most notably Steve Dunleavy's payment to a witness in the William Kennedy Smith trial. (The $40,000 he paid to Anne Mercer, who drove Smith's alleged victim from the Kennedy mansion that night, caused Mercer's testimony to be discredited. "I have to thank Steve Dunleavy for what he did with Anne Mercer," Smith's attorney said when his client went free.)

Kearns is not above floating a few old rumors about Disney's marital problems and personal life in his book, and says that she tried to keep it from getting published. "She was running HarperCollins at the time," he says. "She'd seen the book. It went to her company. She didn't want it published. I don't hold that against her."

"Bullshit," says Disney, who is now vice president of content at News Corp.
"I never saw his book and wasn't aware that it came to HarperCollins. It
makes a much better story to say that someone tried to stop your book than
to say that no one wanted to publish it."

The Kennedy Smith saga was a "Hard Copy" exclusive at first; "A Current Affair" and "Inside Edition" tried to take the high road. "And the network guys didn't understand that it was news," says Kearns. "Shows how wrong they were. And it showed how little sleazy tabloid stories can turn into news. It ignited the whole debate on date rape, naming the victims in rape trials." (It's worth noting that the New York Times was one of the first papers to identify Smith's accuser by name.) "And then, months later, when Clarence Thomas was up for the Supreme Court judgeship, and he got involved in the thing with Anita Hill, Teddy Kennedy, the great voice of liberalism, couldn't open his mouth because he'd been shamed in this case."

One could argue that almost any Kennedy story can be made into tabloid fodder without turning the dial too far, what with that big back story of family tragedy and misadventure. The first real crossover tabloid story of the '90s broke on May 10, 1992, when Amy Fisher shot Mary Jo Buttafuoco in Massapequa, N.Y. It had all the elements of a true-life soap -- the clueless wife, the loutish Lothario, the mystery vixen -- save one.

"There was no one in the story you could feel sorry for," says Kearns, "no one that you could identify with. In every tabloid story there is one character -- you see [the story] through that person's eyes, you identify with that person. In the Buttafuoco story you couldn't identify with the victim." As the story morphed and grew, with new revelations every week and more and more perfidy captured on tape, the nation reached saturation. Even People magazine now seemed to subsist on the "Long Island Lolita." We had become a tabloid nation.

O.J. Simpson, of course, gave us victims we could identify with and a slow train wreck of a trial that was virtually inescapable. The "tabloid babies" of Kearns' narrative had crossed over to the networks (even as some network people went in the other direction). The first time "Nightline" covered the murders, five days after Nicole Simpson and Ron Goldman were killed, Ted Koppel apologized; when the ratings went through the roof, he quit saying he was sorry.

Soon it was all O.J., all the time, from Regis and Kathie Lee in the morning to Jay Leno jokes at night. The trial itself took center stage and tabloid TV as practiced by Kearns and company seemed downright quaint. "When the world was watching from their offices live," he says, "we were repackaging it with alliteration and music -- who needs that shit?"

Today, in place of "Hard Copy" and "A Current Affair," we have "Dateline," "60 Minutes II," "20/20" and "48 Hours" -- and that's just on the networks. Kearns wrote some pilots and cast about for a new project. His collected notes came together in "Tabloid Baby," which he is promoting now with the help of his wife, Allison Holloway, another veteran of the scene. He doesn't come out and say that he couldn't get arrested after a career in tabloid television, though he admits his prospects looked dim. His last project was for Fox: "When Pets Go Bad II." I ask him how people come up with ideas like that.

"You walk into a room, it's like the monkeys with the typewriters," he says. "It's full of video monitors and people are transcribing every piece of video in the world. And they might find they have 10 great pieces of video of animals attacking people -- 'When Pets Go Bad!'" Voila.

A lot of it is in the packaging -- like that film of a donkey sexually assaulting a man whom the beast had found defecating in his pasture. "Fox has always wanted to air it but never could," Kearns claims. "Every time someone presented it to them they would put on ragtime music and sound effects -- 'Boing!' I saw it and was horrified. This makes 'Oz' look like 'Touched by an Angel.' It was horrific. So I played it very straight and put some scary music behind it -- 'This man is invading the territory of an animal ...'"

For the holidays they had footage of a Santa being attacked by one of his reindeer. It was a reenactment, actually. The injured Santa was demonstrating how he'd been attacked, but things went badly. "He was screaming, 'Help!'" Kearns recalls, nursing the last of his beer. "We thought he was doing it for the camera but, no, he was bloody. It rated very well."