Some cookbooks make such great reading (and such lousy guides to fixing dinner) that you never need to take them into the kitchen. 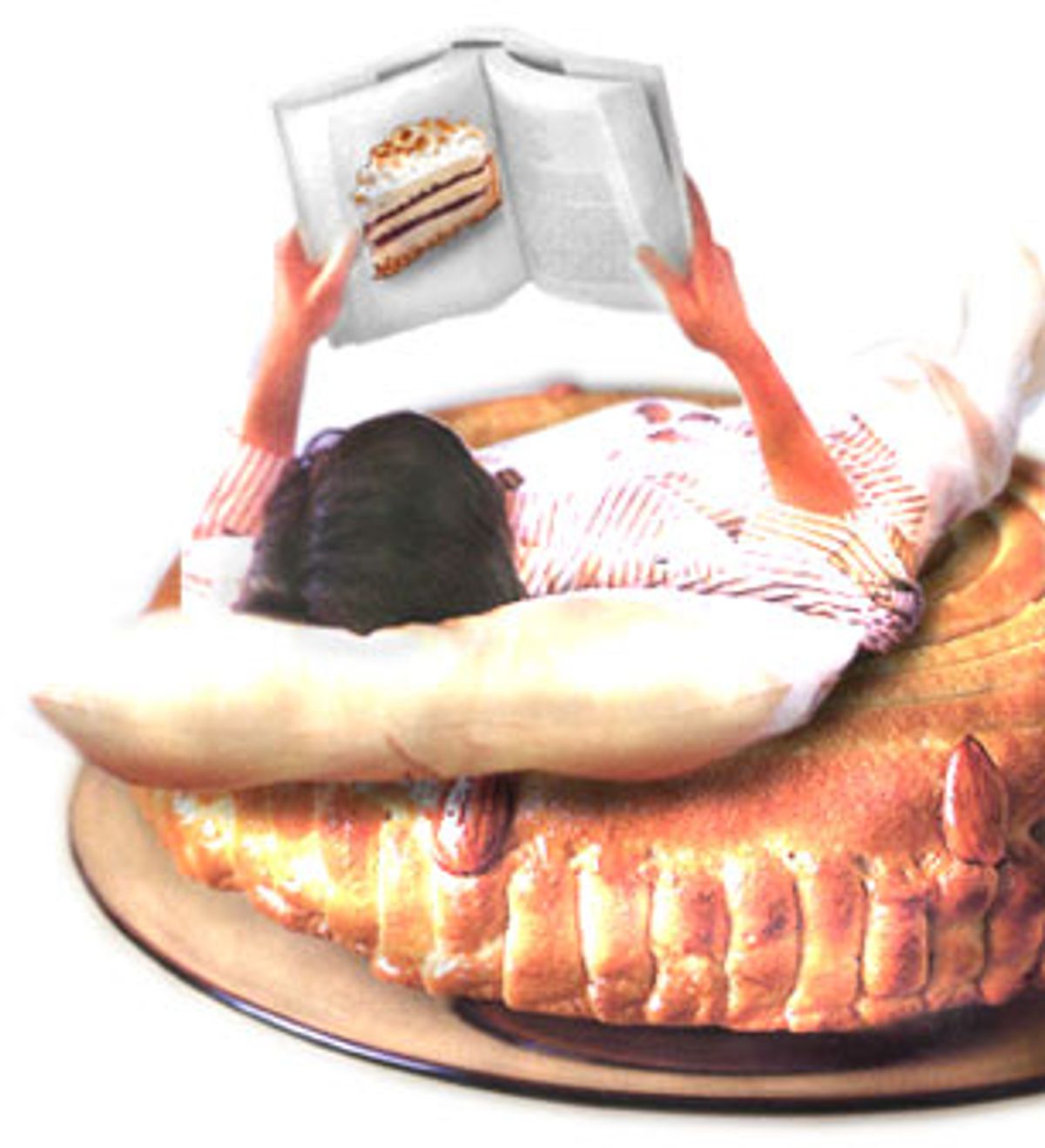 "I love reading cookbooks in bed," I once blared out in a TV interview. Hearing the guys in the control room laugh, I hastily made things worse by adding, "Not that kind of bed." Why didn't I just say "Cookbooks make great bedside reading"? Especially at this time of year, as the holidays march toward us and trample everything in their path and the thought of cooking one more thing makes me want to put my own head into the oven. Maybe in January I'll feel like cooking again, but for now the only cookbooks I'm reading are the ones that steer me away from the kitchen and under a pile of quilts, where I can cozily marvel at other people's industriousness and forget my own horrible frantic life. The following suit the purpose admirably and would make nice presents as well.

Sylvia Weinstock's Sweet Celebrations: The Art of Decorating Beautiful Cakes is just about perfect. I have no immediate plans to spend hours making a wedding cake -- or one shaped like a hot-air balloon or a half-open hatbox with sheets of edible "tissue paper" poking out -- so this is the best bedside reading I could hope for. If I hadn't actually met Weinstock, I wouldn't believe she was a real person. Surely only an imaginary chef gives directions like "The fruit and flowers should be started 10 to 12 weeks in advance."

But she does exist, and the book's idyllically beautiful pictures prove that her cakes do, too. Weinstock's not one of those bakers who rely on Crisco and plastic fountains to get their effects. Her recipes are of uniformly high quality. It's probably impossible to make anything that comes close to looking like one of her creations, but "Sweet Celebrations" seduces you into wanting to try. I'm fairly certain that I'm going to make the cake that looks like a stack of wrapped Christmas presents, although my time might be better spent in wrapping real presents if I had shopped for any.

The Making of a Pastry Chef, by Andrew MacLauchlan, lures the reader even further into the recherchi world of fancy desserts. This is the perfect book for those artsy souls who dream of dropping out of the rat race to work with spun sugar at a four-star restaurant. Of course, pastry chefs work harder, for longer hours and standing up, more than most ordinary people could bear. ("Maintaining my knees is the hardest part," says Maury Rubin of City Bakery.) But that only makes this book more succulent: You get to feel like a pastry chef while simultaneously thanking God you're not one.

Though the book has recipes for 50 exceptional desserts, including rhubarb napoleon with preserved ginger, tangerine sorbet with pomegranate sauce and berries in champagne jelly, the fun part is the interviews and anecdotes from famous pastry chefs. "One Fourth of July, I was working on the Trump Princess in New York," recalls Dan Budd, a professor of pastry arts at the Culinary Institute of America in Hyde Park, N.Y.:

We had desserts going from the kitchen, which is at the base of the vessel, to the back deck  We put these desserts on large mirror platters and put them in an elevator with a waiter. The elevator was open on every level and the mirror caught on the second level of the boat and flipped the desserts straight up in the elevator shaft and the mirror slid down between the elevator and the floor and it traveled all the way down, smashing at the bottom of the ship. Donald Trump himself turned and said, "What was that?"

Gosh, this bed is comfortable ...

Moving in a somewhat different direction is Garde Manger: The Art and Craft of the Cold Kitchen, produced by the Culinary Institute of America. This book only looks stately and coffee-tableish; it's actually a detailed investigation into basic cold-food prep and is intended for professional chefs. (The term "garde manger" refers to the station in a restaurant kitchen where the cold dishes are prepared.) For me, the best part is the recipes for mammoth quantities of food I'll never have to make at home. Hot dogs, for instance: I'm delighted to know I'll never have to mush together five pounds of boneless beef shoulder clod and four pounds of "jowl fat cubed, partially frozen," adding a little tinted curing mix and then packing the whole thing into 50 feet of rinsed sheep casings.

At the same time, I like to know I could make all those hot dogs (or mozzarella, or 20 servings of eggplant terrine) if I wanted to, and it's nice to get a behind-the-scenes peek at the way a restaurant kitchen is organized. Besides, many of the non-hot-dog recipes -- crab meat rolls with infused pepper oils, fried ginger and tamari-glazed mushrooms, for instance -- would be delicious to serve at home as long as you have 30 or 40 friends to help.

Say you'd like to try Keller's braised short ribs, for instance, which look so delicious you want to lick the photo. To start with, you'll need to soak some marrow bones in ice water for a day, changing the water every six to eight hours. Then you forget about the bones for awhile and, "leaving the silverskin attached," cut a bunch of short ribs against the grain into two pieces; marinate them for a day; clarify the marinade; sauti the meat with some vegetables; add veal and chicken stock and simmer the meat; strain the braising liquid "several times" through a chinois until it leaves no trace of residue; blanch some root vegetables, baby leeks and red and white pearl onions (red pearl onions! I've never even seen them!) and give them individual ice-water baths; wrap each rib in caul fat and brown them; put them in a single layer; bake them in the braising liquid; add the vegetables and some chopped parsley and "meanwhile, cook the bone marrow: This step should be done at the last minute before cooking  If the oil is too hot, the flour will burn before the marrow has a chance to crisp; if the oil is too cold, the marrow will melt before the outside is crisp -- and you'll be left with a ring of flour and no marrow." Home cooks will, of course, have shot themselves somewhere back when they were cutting the tomato diamonds I forgot to mention. But I can't imagine a book that's more delectable to imagine using. If I ever get to Yountville, I'll let you know how it all turns out.

"The moment of truth. The tasting. As with wine and cognac, three senses are brought into play: sight, smell, and taste. Ports come in many colors, even those of a single style; whatever the hue, the wine should be bright and uncloudy. The wine is swirled and smelled. Its nose should be rich and full, fruity for reds and nutty for tawnies ... Some of the flavors tasters detect in red ports are blackberry, black cherry, black fruits in general, chocolate, tobacco, and raisins; and in tawnies, coffee, toffee, cashews, almonds, and tropical fruit." Yes! Yes! After-Dinner Drinks, by Jon Beckmann, doesn't even have any recipes -- just page after luxurious page of description, along with photographs so burnished and impressionistic that sometimes you can hardly tell what they are. There's plenty of useful information, too -- useful if you need to know about after-dinner drinks, I mean -- but it manages to slip down as easily as a toffee-flavored almond-raisin blackberry. I don't even like after-dinner drinks, but now I plan to read "After-Dinner Drinks" aloud at my next dinner party. My guests will like it a lot better than that sticky bottle of Kahlza I keep behind the salad spinner.

If classy reading is making you too sleepy, you can always switch to some comic relief in the form of The Hemp Cookbook, by Ralf Hiener. I realize that hemp is the world's new wonder plant. I think it's great that "insulation, wall coatings, and floor coverings" can all be made out of it without unduly scarring the earth. But why do we have to cook with hemp just because it grows from seeds? Why can't we just let it be useful without eating it? Even the book's preface sounds lukewarm about the prospect: "Although spaghetti al dente with plenty of garlic remains an all-time favorite, some of the hemp dishes here will quickly grow on you. A hemp cookbook, then, becomes essential, especially one that, in addition to many other dishes, includes a recipe for Raisin Noodles in Hemp-honey Sauce." Or hemp and chocolate dumplings? I don't like to be uncharitable at Christmastime, but I don't eat acorns and I'm not going to start eating hemp. Luckily Hiener and his three co-authors are German, so they'll never find out how ill-conceived I think their book is unless you tell them.