Tim Roth talks about the plague of incest, the nature of nightmares and directing his first movie, "The War Zone." 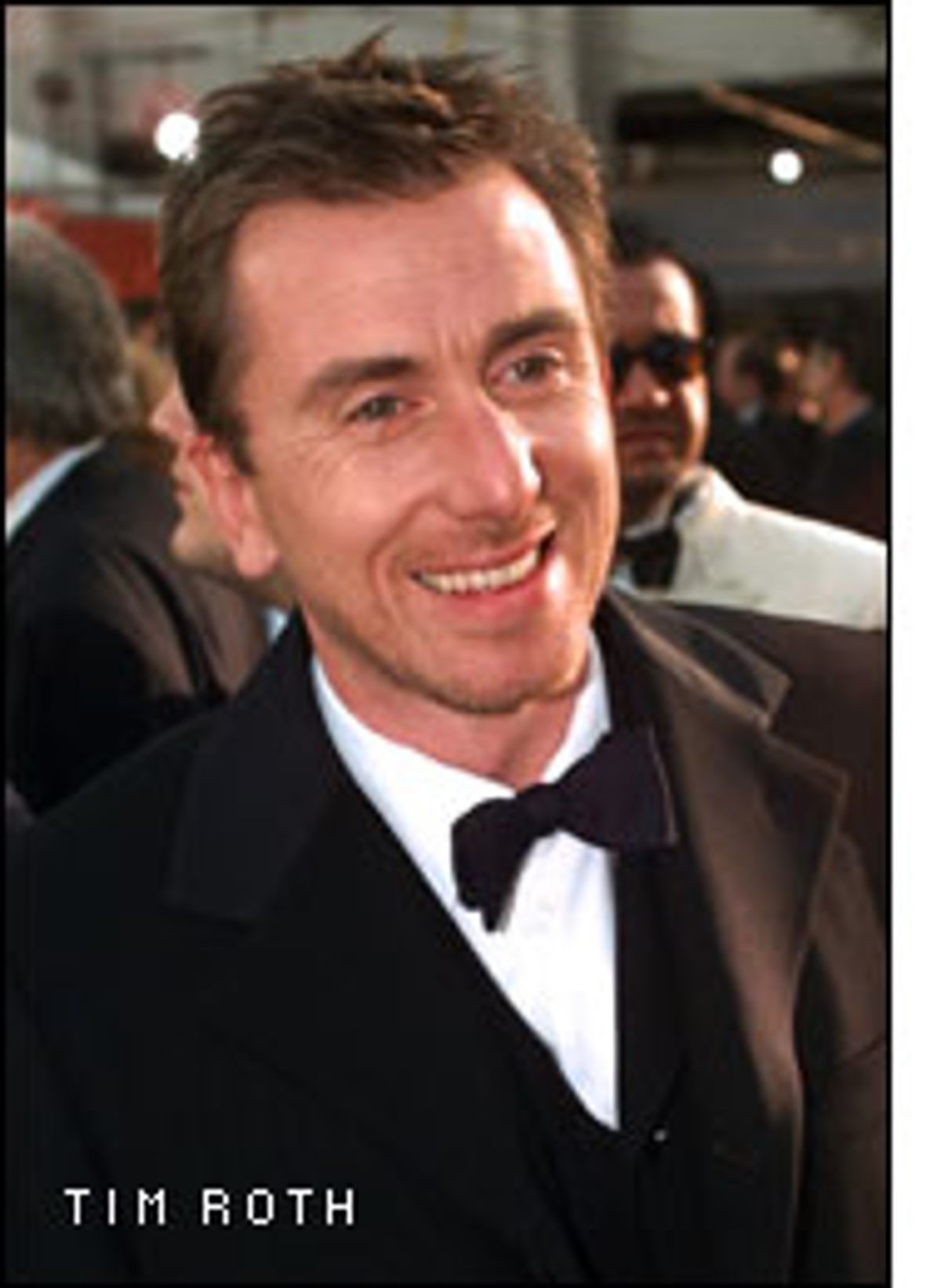 "The War Zone" is not a nice movie. It's beautiful and harsh and shocking, but it's never likable nor easy to absorb. Adapted from the novel by Alexander Stuart, the film centers on a small English family that has just moved from London to the English seaside. During the course of the movie, the family is ruined by an incestuous sexual relationship between a working-class father (Ray Winstone) and his 17-year-old daughter, Jessie (played by newcomer Lara Belmont). Tom, Jessie's younger brother (another newcomer, Freddie Cunliffe), discovers the sexual trysts and confronts his sister but won't notify his mom, who has just had a baby, or tell his dad that he knows.

Unlike "Happiness" (1998), which bludgeoned its audience with pathetic pedophiles and murders, "The War Zone" creeps up behind its audience and slits its throat. It's coolly gorgeous and familiar -- if cinematically formal -- and the family appears strong and healthy at first. It's easy to respond to them, which makes their secret even more devastating.

Actor Tim Roth ("Reservoir Dogs," "Rob Roy") says he was so moved by Stuart's novel that he agreed to make his debut as a director with it. With Stuart adapting and Roth set on capturing the emotional experience of reading it, almost every part of "The War Zone" ends up uncomfortably ambiguous, from the way Jessie uses her sexuality to the exact nature of her relationship with her brother. With a subject as volatile as incest, ambiguity can be pretty difficult to appreciate. And perhaps predictably, the reviews in England, where the film opened, offered mixed statements of praise and censure. Roth, who is now bringing the film to the States, met me earlier this week in the lobby of the Rihga Hotel in New York to talk about that controversy, the way families work and the tiny details that make movies breathe.

Does the controversy over the movie in England surprise you?

I was warned that the British would go for us. I was not surprised. I was more worried that they would go for Freddie and Laura, or Ray, or any of the actors. But I was fortunate that they just went for me, which is fine.

Do you think that the American reaction will be different?

My experience with the film in America has been phenomenal.

Yeah, that was the first public screening. And there it was, and a woman stood up in the audience and talked about it afterward and said, "That is what happened to me, and that is what it feels like."

How did you deal with that?

I was shocked, and then we talked. It was wonderful, and she did that in front of a huge audience, which I thought was remarkably courageous. It has changed my life. Americans have a way of talking about things that nobody else has.

You're partnering with Rape, Abuse, and Incest National Network for the opening here, which puts you at an odd confluence of art and activism.

It's odd. I wanted to make a piece of cinema about something that makes me angry. I wanted to treat the subject in a cinematic way. We're low budget, so we're destined for the art house -- fair enough. But it fights against itself. It's not confusing to me, because I made it for me. But it is confusing. On one hand, it could be relegated to an issue movie, or whatever.

Which would be a shame.

It would be a shame. I wanted it to be a cinematic journey. And composition and lighting and what-have-you are very important to me.

You've said that you were happy with capturing the experience of the book, if not all the details. It's out of print here, so I have to ask if there were details that you had to throw out that just killed you to do so?

No, it was a great experience. Working with Alex [Stuart, the novelist and screenwriter] was terrific, because we just rewrote the experience. [The book] was set in summer; there were tourists everywhere. I said, "Set it in winter -- that will give you some new eyes." Plus, I love the winter landscape, and that seemed to echo what was going on in their heads. For me, it was adapting the experience that I had when I was reading the book, you know, the feeling of these characters. But you do lose things that you love.

You've got this winter landscape, and this setting -- near a turbulent ocean -- and it's fairly easy to identify the metaphor. But then there are some details that are much more subtle. I thought maybe I could get you to elaborate. To begin with, there's a very strange use of focus, particularly at the beginning, where inanimate objects are in very tight focus and characters' faces are not, they're blurry.

It's all a matter of taste. But also, when a nightmare is occurring, there's a physical aspect to it. A ball can be a little bit too round. My nightmares as a kid were always just textural, color. They were never actually stories that happened in my dreams. I wanted to bring a bit of that into the film in a certain way.

There's a scene in the kitchen where the butter dish is in focus, or shoes ...

That's mundane life, the ordinariness of it all. It's the mechanics of life that we had to investigate to introduce the audience to this family. To get them, if we can, to sit at that table -- always leave a chair empty for 'em.

Another detail is that nudity is used in an interesting way, particularly the casual nudity around the house.

It's inappropriate. That's absolutely intentional. I remember going to houses, and seeing a dad walk through, and [thinking], "Fuck. Put some fucking clothes on."

To other people's houses?

Yeah, you know, '60s generation, with hippie parents who were becoming accountants. That is a line that hasn't been drawn, and I wanted that in the house. There's something very wrong with that.

The line is drawn by each family in its own way. It's individual choice. At what age is it inappropriate to take a bath with your child? It's up for debate, but that is what is going on in that house. On top of which you have a hormonal, 16-year-old child who will see sex in a table lamp, because he's at that point. And his initiation into sexuality is through his discovery of this monstrosity that is taking place. His sex life, his life -- he is abused. His life has just been ruined by looking through a window.

What parts of your family experience did you bring to the film?

What about with your own children?

Baby detritus. Baby stuff. Nappies. And shields that you put on your breasts to catch the milk. And, uh, everything that's about new birth. Me and Tilda [Swinton, the mother] -- because Tilda had just had twins -- we became obsessed with the things that you never see in a film that are actually in your house, that you never thought would end up in your house.

There should never be confusion as to whether she's a victim. If [her father] crosses the line, he crosses the line -- even if he was invited. There's no ambiguity in that, there's black and white. Everything else is a gray area.

If your child goes to you and says, "I want to fuck you," what do you do? I'm not saying that that happened -- by the way -- but some people see the film in that way. It's up for interpretation. But do you cross the line? You're an abuser. It's straightforward.

As to her motivations, the way she handles it, that's up for grabs. I left it very open, intentionally so.

I read that you shot a second ending. Did you take it out because it made the film less ambiguous?

I shot an ending that I felt was wrong. It was a specific conversation that takes place between the brother and the sister. It was in the book actually, in a very different way. But we all decided that it didn't belong in this film.

Can you elaborate or tell me what happened?

No. And it's really irrelevant: It gave the audience a pop psychology excuse.

Why was it important to you to avoid pop psychology, because the film never ...

Because there is a lot of stuff that is spoken by victims who are in the media who offer you quick and easy solutions. I didn't want to get involved with that stuff. I find it quite abusive. I think that those people need to go back to their therapists. If there were easy answers to any of this it wouldn't exist.

It is for him.

But he says that before ...

He's a teenager. He's also transplanted -- he's from London and he's in the middle of nowhere. I wouldn't like it. And it is a sick world, I suppose. I'm quite an optimist.

Well, that shone through the film ...

My feeling is that, my hope is, that they'll get each other through this. For them, this has happened. We will work out our own ending, our own conclusion -- if there is one. I've heard many, many versions, and I'm thrilled by it.