A thorough biography of the disgraced televangelist drops a bombshell about his Louisiana childhood. 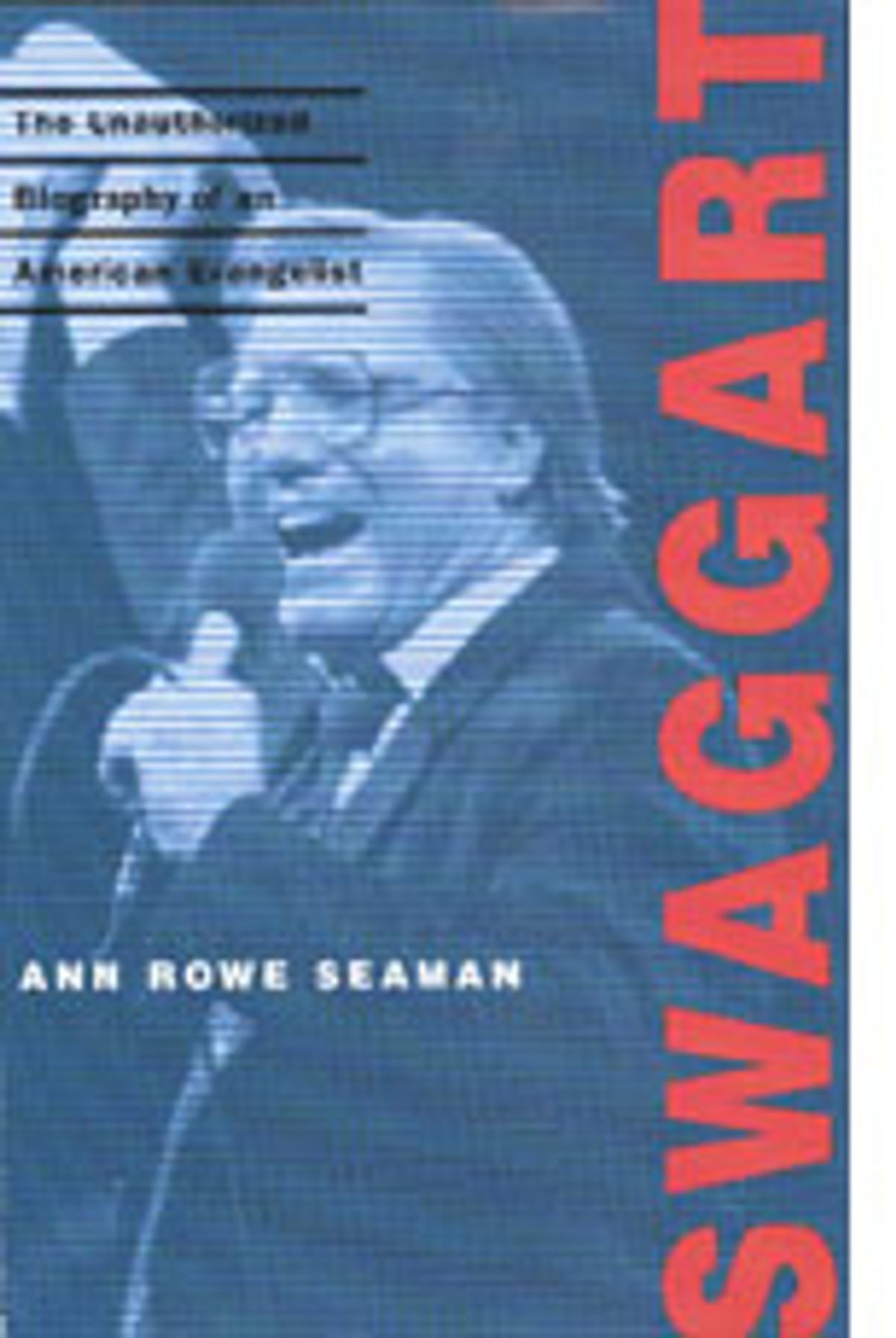 There's a particular type of overachieving Southern white boy raised by a mama who's an angel and a daddy who whupped his ass. Spoiled yet cowed, he becomes a man who keeps sneaking behind God's back. When he gets caught, he repents as wetly as he sins, with the cleansing tears of dipped-in-the-water glory hallelujahs. He can't see how alike the passions of Saturday night and Sunday morning are, though -- the firewall between the flesh and the spirit is too imposing.

To live on both sides of that wall without psychic miscegenation, this Southern man puts some spin on his sin to keep from technical fornication. Bill Clinton withheld his seed and denied the temptress her pleasure. Jerry Lee Lewis and Elvis addressed their desire for little girls by marrying them. And Jerry Lee's cousin Jimmy Swaggart had a wonderfully theatrical hedge: He paid prostitutes he didn't touch to re-create pornographic tableaux for him -- devilish, motel-room versions of a living crhche.

Jimmy and Jerry Lee, both born in 1935, grew up poor together in Ferriday, La. "Swaggart," Anne Rowe Seaman's biography of the evangelist, argues that both boys ended up in the same line of ecstasy production, that the shaking going on in honky-tonks was a lot like the rapture in revival tents. Swaggart, she contends, was undone in part because he could never acknowledge how fully eroticism powered his preaching.

Seaman offers a fascinating history of glossolalia, or speaking in tongues. The Catholic Church condemned this inspired babbling as satanic 900 years ago, though many considered it evidence of blessing by the Holy Ghost. Around 1900, two Pentecostal fundamentalists, one white and one black, revived the practice, and it spread quickly around the United States. "The crossing of racial lines," Seaman writes, "was only one of the qualities that marked Pentecostalism as an outlaw movement  The same crossover, in the same religious milieu, would produce rock and roll." A-wop-bop-a-loo-bop a-lop-bam-boom, amen.

The Swaggart-Lewis-Gilley family (country music star Mickey Gilley is another cousin) belonged to a Pentecostal faction known as the Assemblies of God. The future evangelist's parents, Sun and Minnie Bell Swaggart, initially considered "Holy Rollers" gauche, but in 1943 Minnie Bell and a handful of relatives got the Ghost, and then religion became an inter-family competition. Instead of bragging about whose son got into which university, mamas would recount their boys' gibbering and twitching on the church floor. Eight-year-old Jimmy did his mother proud soon after her conversion: He not only spoke in tongues, he prophesied a flood in Ferriday and the bombs that would drop on Hiroshima and Nagasaki. (Swaggart eventually decided speaking in tongues was too weird for a mass audience, and in 1972 he dropped it from his services.)

Seaman examines Swaggart's subsequent rise through the revival circuit to the peak of televangelism -- and his 1988 fall -- through a forgiving lens of psychology. On page 369 she drops the bombshell that Swaggart may have been sexually abused, repeatedly, by a relative when he was "eight or ten." Though she admits that her sources are shaky, she makes a case for incest that includes as evidence the speaking in tongues, the childhood prophesies and the lifelong "addiction" to pornography and prostitutes. She's less convincing when she diagnoses what Swaggart calls the "demon oppression" of his lust as clinical depression -- an ailment known for dulling sex drive.

Along with overreaching from her armchair, Seaman foreshadows too portentously too often, and the book is a third longer than it needs to be. Her prose tends to thud when she writes about the music in this gifted family. She's unearthed wonderful stories about Jerry Lee and Jimmy learning the "walking left hand" of the "Holy Ghost boogie" by sneaking into all-black dance halls, but she never makes the reader hear glossolalia or Jimmy's piano playing on his gospel records or the difference between a stoned, half-assed Jerry Lee Lewis concert and a great one.

She has done seven years of reporting, however, and her story is consistently fascinating, with its dead young brothers and sons, child brides, fleets of Cadillacs, media-empire building, rise of the Christian right and the vicious smear campaign that Swaggart and Jim Bakker, the little Caligula of the televangelists, carried out. (Fun fact: In 1983 the unbeautiful Bakkers spent $22,000 on mirrors.) The "Partial Lewis/Swaggart/Gilley Genealogy" chart is astounding, with its "cousin," "nephew" and "sister" arrows crisscrossing the usual lines of marriage and descent.

Most important, Seaman's evenhandedness (I can't tell if she's a Christian herself) invites you to have some sympathy for the hypocritical, megalomaniacal Swaggart. You wish he and his brethren could find a god who wouldn't demand the compartmentalizing that tears them apart. Though a mixed-race-looking womanish man is probably the last prophet these Southern boys would heed, they could all take a page from him whose name was Prince when he sang: "I know from righteous/I know from sin/I got two sides/And they both friends."