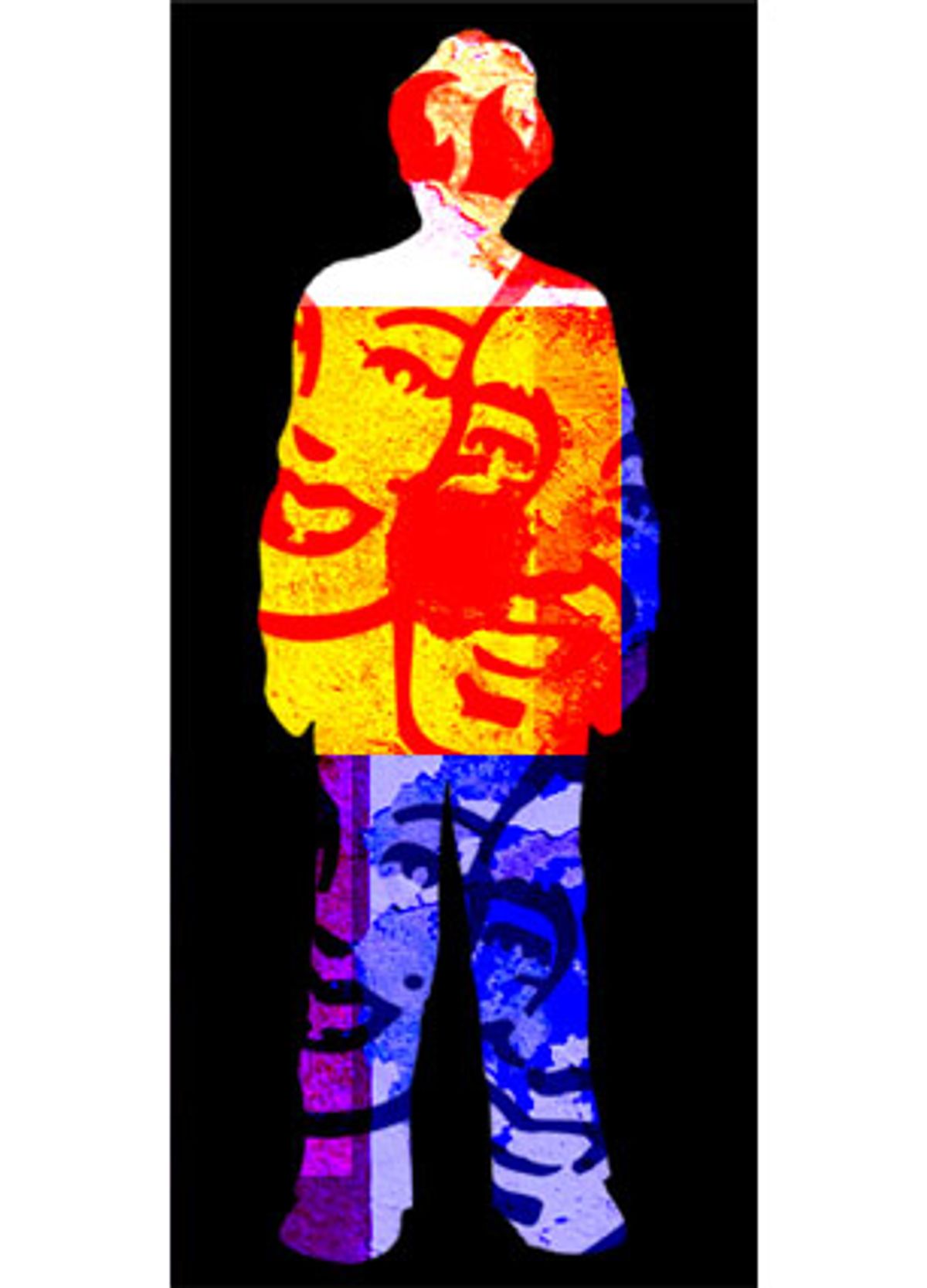 "You're going to die," our son announced.

He was 5 years old. Our wills were in order. We wrote them ourselves, with Family Lawyer for Windows. Maybe we should have hired a real lawyer, even if it cost more than the flight for our first jaunt away from our son. We also could have taken separate planes. We know people who actually do this, routinely. When childless, we'd mocked them. Suddenly it seemed like a sensible idea. If we cared about his future, if we didn't want to destroy his life, would it be so very terrible to stagger our departures from New Jersey?

"We're not going to die," we promised him, and we mostly believed this to be true. Odds were that the 747's engines would not explode; no terrorists would board; we would not even get crushed by a double-decker bus when we looked the wrong way crossing the street in London. We simply couldn't die because we have no satisfying choice of recipients for our most precious possession -- the fruit of our loins.

Neither, by the way, do any of the other parents I know.

Show me a photo of a doleful Romanian orphan or a disoriented Ethiopian toddler with flies on his eyelashes, propped up by his dying mother, and I will get teary-eyed immediately. Maybe all parents do. No doubt that becoming a parent changes -- and intensifies -- your fears about your own mortality. It also introduces some thorny logistical decisions that are different, I believe, for our generation than for our parents'.

My husband's parents are dead. My parents are 72. They can survive (just) a week baby-sitting, but they are not good long-range prospects as guardians. My sister in North Carolina now has a toddler of her own, so she might rally herself to more enthusiasm about inheriting my son than she did on the occasion of that fateful first separation, three years ago. At that point she said, somewhat vaguely, "Maybe you'd better ask Russell."

So if we die, our son Nicolas -- and the life-insurance money -- will go to my brother in San Francisco, who is, despite the tattoos and earrings, a kind, reliable adult.

Or so I thought.

"How much money do I get?" Russell asked, when we rubber-stamped the arrangements for the will.

A million, give or take. Probably, we told him, enough for college.

"Cool!" Russell said. "Forget college. Nick and I are going to Tahiti."

He was kidding, I think.

Nick's first reaction to the prospect of life with Uncle Russell was enthusiastic. "We'll get a lot of pizzas," he said, "and throw them at each other, and throw ice cream, too." But then he began to worry. "How will I get to San Francisco?" he wanted to know. How would he know we were dead? If we didn't pick him up at school, would they just leave him locked up there in the dark? And who was Russell's wife? Did he have one? Did she want children?

An uncanny question, since Russell's girlfriend would rather have head lice than children.

Of course it is family to whom you are supposed to turn in a crisis, to the rock-steady obligation of blood ties. But family no longer seems to have the same societal weight. While I'm lucky to be close to my siblings, many people I know only speak to theirs, grudgingly, at Thanksgiving and Christmas.

It's hard to imagine that, if all members of my immediate family got struck by lightning, a cousin in a distant port could be sent a telegram saying, "You're all he has left," old-novel-style, and feel any moral compunction to rise to the occasion. I thought of this, repeatedly, during the heartbreaking Turkish earthquake. If buildings collapse on us, believe me, no caravans of concerned second and third cousins are going to be braving the jammed New Jersey Turnpike with their own generators in tow to rescue us.

My son barely knows his aunt and uncle, much less his extended family. Now that people don't regularly stay put and die in their hometowns, it's more difficult to foster the close, daily relationships that might allow people to comfortably embrace a child not their own.

Even the simple fact that people marry and procreate later changes things radically. My parents should not be so old in relation to their grandchild (though I thank them for not noting this more regularly during my dating years). If we'd started a family earlier, we might have had time for more than the one little tyke, which in movies, at least, seems to make orphanhood more bearable.

An old friend and his wife asked her sister to take their two boys in the event of their death. The sister said, curtly, "I don't really like any kids other than my own." So the winner is -- his 70-year-old parents. (Hers are bitterly divorced, and anyhow her father and his third wife have their hands full with a toddler of their own.)

"Well, we'll take your boys," I offered, at a rare dinner. We've known them for almost a quarter of a century but we live 1,000 miles apart; I see them once, twice a year.

"And we'll take yours!" they agreed.

We clinked glasses to jocularly seal the deal.

Surely we must have better options. What about my local friends? Shouldn't I have friends whose children are the same age as my children, whom I see regularly, who will take my son in for an afternoon if I need a couple of hours by myself for, say, root canal work? Well, I don't. We barely see our friends. Most of them can't make room for lunch, much less a grief-stricken orphan.

One of these friends spent weeks trying to get off work for a mammogram. Her frantic schedule was not the only problem. She was terrified. "I can't die," she said. "I can't die now. It is out of the question. I have kids."

This line made me churlish. Would dying be peachy if she were childless? Are Americans so unable to admit to any personal longings that even a desire to live must be deemed selfish unless wrapped in the flag of Family Values?

I thought of the warped, silly sentimentality of "Titanic" -- the bad guy grabbing the baby so he could get the last seat on the lifeboat. What a cur! Yet if Kate Winslet had simply boarded the goddamn lifeboat when she was supposed to, Leonard DiCaprio would not have had to give her his seat on the piece of flotsam, and he would have lived. If that's generous love, give me selfishness. It's OK to want to live, even without children.

True to my friend's wildest fears, the mammogram turned up something suspicious. She had a biopsy, the news was good and she was told that she was in no danger. The last couple of developments happen much quicker on the page than they did in life, and I don't want to belittle her panic -- I'd gone through it myself -- but this friend acted, every step of the way, as if it were time to pick out her headstone. She simply knew she was going to die.

"Cut them off!" she begged her doctor, in re her breasts. "My kids need me!" Another woman I know remains convinced, despite the reassurances of several doctors, that she is at extremely high risk for breast cancer. She also worries about brain tumors from living too close to high-tension wires. And toxic mold. This is less fear for their children than, in my utterly unqualified psychiatric opinion, a plea for attention and appreciation. These women had been so buried in the relentless needs of their families that they feel invisible, even to themselves. And being too generous, too other-directed, to complain, they unconsciously seize on an opportunity to set the score straight. It's the grown-up version of a game we all play when we're little: "Won't you all miss me when I'm gone. And boy will you be sorry."

Now that my son is 8, he's quite capable of wishing me dead if I, say, make him do his homework. He understands about the insurance money. He has let it be known that in the event of my death he would like to be able to spend it at his discretion, without an intermediary. There are certain Pokimon cards he would like to buy, on Ebay. He would like a new bike with -- "Wheelies"? "Poppers"? He would also like to visit the surfing beach in Australia that he saw in "Endless Summer."

We have explained that the money is for college. "Why would I need to go to college," he retorts, "if I'm a millionaire?" He has now met Russell's girlfriend; he even liked her. But of course he cannot really conceive of losing us.

We all want to bequeath our children the dependable yet twinkling goodwill of Jimmy Stewart in Bedford Falls. But it's not as if "It's a Wonderful Life" was a piece of social realism in 1946. Every orphan is an orphan out of Dickens. For all our careful nest feathering, our son is about as buffered against ugly contingency as a passenger wearing a safety belt during a plane crash.

My brother Russell, it turns out, is on many parents' approved-guardian lists. In fact, he has agreed to take five little boys in addition to my own. This disturbed me at first, but now I try to look on the bright side: Half-a-dozen screaming boy-children in a one-bedroom, one-bath house on Potrero Hill might rouse themselves to some amusing food fights.

My brother and his girlfriend, who are heavily involved with virtual reality R&D, don't do Christmas, but I hear they have a really good homeopath. It's a charmingly high-concept extended family -- not a wonderful life, perhaps, but it will have to be good enough.

Lisa Zeidner's last novel was "Layover." She is a professor of English at Rutgers University in Camden, N.J.