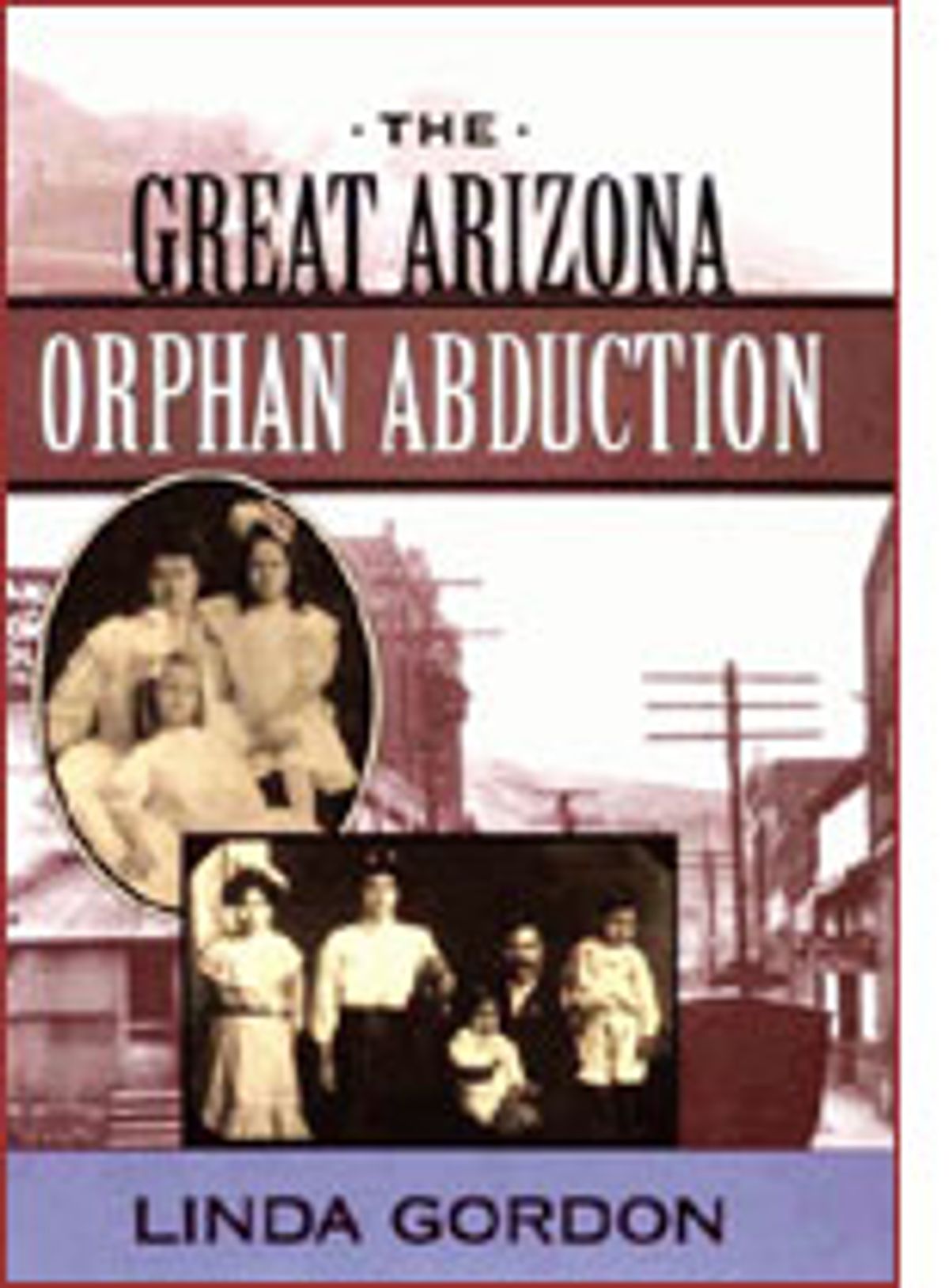 In 1904, a group of New York nuns delivered 40 mostly Irish but entirely Catholic orphans to a remote Arizona mining town to be adopted by local Catholics. What happened next is the subject of historian Linda Gordon's compelling new book: For their act of Christian charity, the nuns were rewarded with near-lynching and public vilification of an intensity hard to fathom today.

As Gordon makes clear in writing so alive that it makes the reader smell sagebrush and white supremacy, the Eastern nuns didn't realize that, in turn-of-the-century Arizona, Catholic also meant Mexican, and Mexican meant inferior. How could a dirty, amoral Mexican (terms that were among the nicer descriptions of the would-be foster parents in newspaper accounts and sworn testimony) raise a white child? To Western whites, the nuns were depraved white-slavers selling children to drunken-whore savages.

Local whites (nearly all Protestant, and therefore ineligible to receive the sisters' charges) rioted and "liberated" the children from their Mexican foster parents, all of whom had been carefully vetted by the local (white) priest in accordance with the Sisters of Charity's well-established system. Many white Arizonans concocted stories claiming they'd seen
Mexicans pay a priest on receipt of a child, or claiming that the sisters promised them children if they'd ante up. As Gordon plausibly sees it, these manufactured memories helped them to make sense of why another white would deliver helpless white children to the clutches of near-animals -- and also legitimized their "rescue" of the children.

The sisters sued to win back the children, promising that they'd be placed with Catholic, and -- having learned their lesson -- white parents. Indeed, the sisters abandoned the Mexicans entirely, claiming they would have never given the children to them had they "known." Interestingly, the suits were all civil; no criminal charges were ever entertained, let alone filed, against the vigilantes, although they were kidnappers whose treatment of the sisters and the Mexicans was brutal. When the mob first came for the sisters to "voluntarily" give up the children, 100 people crowded into their hotel lobby, with 300 more outside threatening the nuns with tar and feathers. Many were armed, and several called for a rope.

"In the street a sheriff sat on horseback, with a revolver, like the other men," one sister later wrote. "Women called us vile names, and some of them put pistols to our heads. They said there was no law in that town; that they made their own laws. We were told to get the children from the Spaniards [meaning the Mexicans, a difference the sisters could not understand] ... If we did not we would be killed."

The case eventually reached the U.S. Supreme Court, where, unsurprisingly, whites' right to protect their racial purity, their societal supremacy and their right to state-sanctioned violence remained sacrosanct. The "rescued" children grew up with nice, white criminals as parents and role models, across the tracks from their erstwhile Mexican-American parents, none of whom were allowed to testify, file written statements or even enter the courtroom. The great orphan abduction -- in which Mexican-Americans tried to do the right thing and were nearly massacred for it -- was settled entirely among whites.

For the sisters, who back home had to vie with Protestant charities for the souls of New York's numerous street urchins, religion was all that mattered. As she relates the story of the orphans' fate, Gordon patiently describes the tortured, complex systems of racial categorization that prevailed in different parts of the country. In New York, "Irish" was a separate and reviled race not much above "Negro" or "Slav." The orphans' Irish status, coupled with their sheer numbers (150 more were abandoned every month) made it impossible to find enough adoptive homes in the children's hometown, or even in a nearby state. The activist (and quite feminist) sisters understood that the abandoned children had their best chance at a future in the labor-starved hinterlands, where they were a much-needed resource. The sisters failed to realize, however, that in a sparsely populated region without many gradations among what we now think of as "white," "race" meant very different things.

In Arizona, all social significance hinged on the differences between "whites" and the inferiors: Mexicans, "Chinamen," blacks and Indians. Closest to white in appearance and comportment, Mexicans were at the top of the list but remained (then as now) non-white. Intermarriage (or more often, intercourse) between whites and Mexicans was common and largely accepted in the Southwest, but there were limits -- Mexicans adopting white children, for instance. Gordon's convincing analysis of the nuns' mistake and the debacle that followed points up some potent racial ironies that are still worth savoring today: The Easterners didn't understand that the same train ride that would bring their Irish charges parents and homes would also make them white. Of course, had they been white in New York, there would have been no need for the arduous journey west.