For some seemingly inexplicable reason, No. 2 is No. 1 with Japanese kids. 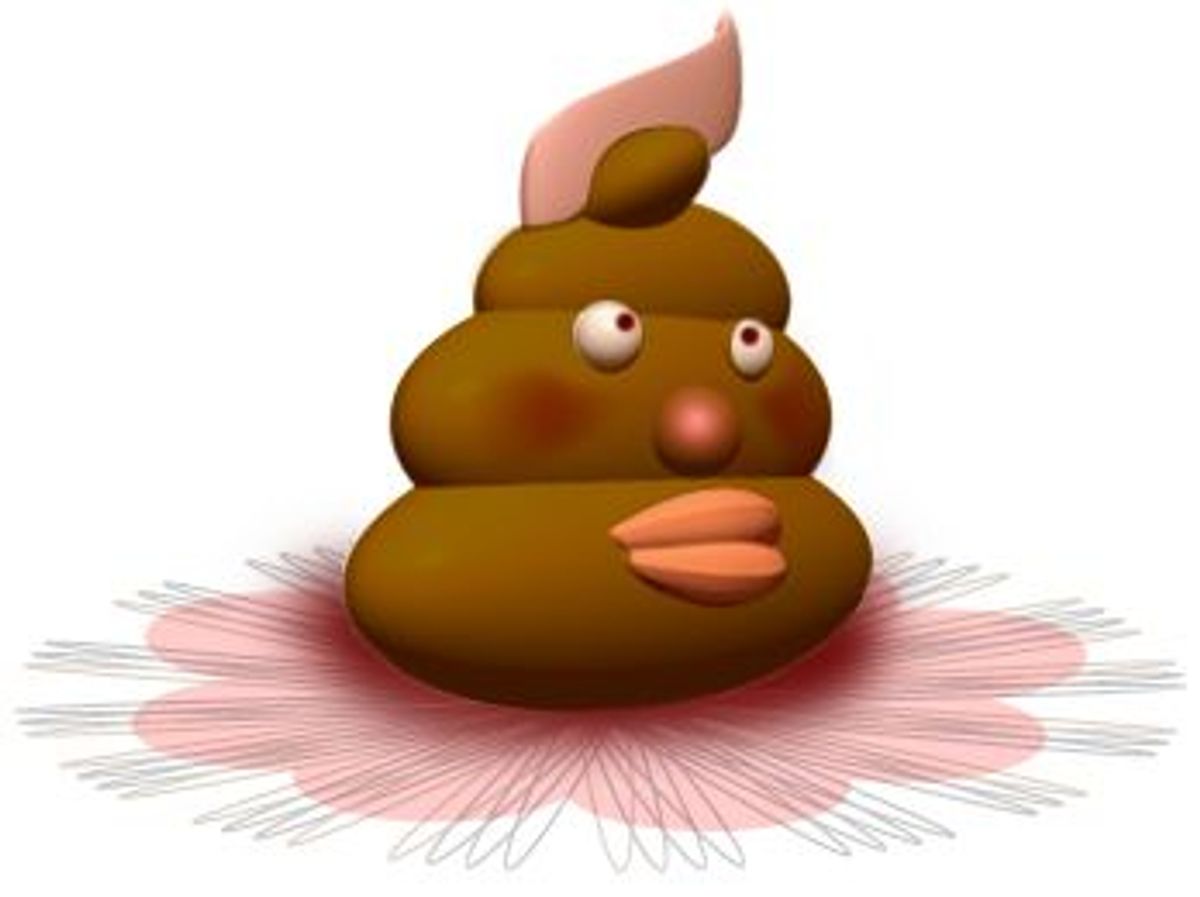 A recent cartoon on Japanese TV features a hero who makes a sidekick out
of his own feces. Meanwhile, at the local temple, visitors buy plastic poop trinkets to bring them good luck. And at the corner store, a vast array of poop-shaped candy is on sale -- a veritable coprophagous feast.

The turd -- presented in Japan as a prettified swirl resembling soft
ice cream -- has become a recurring motif in Japanese pop culture. There's
there's even a term for it -- maki guso -- which roughly translates as
"curlicue poo."

The recent poop-centric "Gakkyu-o Yamazaki" (Classroom King) cartoon on TV is a video version of the comic book with the same name. It features the adventures of a schoolboy locked in battle with his bowel movements. Unique as that may sound, Gakkya-o Yamazaki is not the first popularization of poo in a kid's cartoon. "Ugo Ugo Ruuga" ("Go Go Girl," jumbled up), an infamously hallucinogenic kid's show of the early '90s, featured a pointy-headed excretum that emerged from the toilet and spouted Western philosophy.

And the poop apparently cannot be confined to television and comics. School kids who need good fortune and fortitude during the tribulations of exam time can buy key
chains festooned with dangling blue poo, each wearing a headband and a fierce scowl of concentration on its face. This turd trinket is for students who are fighting for "gokaku un," or "luck in passing exams."

The seemingly disparate concepts of good luck and cute crap come
together in the Japanese word "un," which is both an onomatopoeic rendition of loud guttural exertion and a homonym for "luck."

So it makes sense to visitors of the Tsurugaokato Hachiman Shrine in
Kamakura that traditional charms are updated with a small brown totem
and the wish for "kai un," which is "improvement of one's fortune."

Long before the image of poop was codified and these baubles were molded
from plastic, people were uttering this scatological pun whenever
someone stepped in a pile of doggy doo. Trying to make the best of a
bad situation, they chirp "un ga tsuku," or "luck has stuck to you."

The list of products capitalizing on the popularity of bodily
excretions is mind-boggling. Taken in detail, it is deeply disgusting, even to those with stomachs of steel.

Take, for example, the products of Unchikun (Mr Poop), a company that sells a smorgasbord of sticky treats in the shape of something that should be coming out of the consumer's body, not going in.

A partial lists of Mr. Poop products: Monster Panic, which is
bat guano with wings; Panda, a mound of black and white bear scat; Bow Wow, which is self explanatory; Pants Unchi, a character who wears diapers; and Gold Unchikun, sold to snobs who think theirs doesn't stink.

Bandai toy company makes the spin-off merchandise for "Classroom King,"
churning out items like Punipuni Puusuke (Sir Soft Poo), whose
translucent green visage and quavering electronic voice make him appear
to be the end-product of a lime-flavored Jell-O binge. Bandai also makes
Nozoki Unchi, which is a peeping-tom kaleidoscope of see-through poo. And they even sell a stuffed "animal" poo, in case children become so enamored of the stuff that they want to curl up with it, so to speak.

Just why Japanese kids think poop makes such an interesting character
remains a mystery, even to the very companies that popularize the items.
Ironically, it seems that producing them is far easier than discussing
them.

Asked what makes these characters so popular, the "Classroom King"
spokesman only grunted, "Unnnn ..."

Bandai's Miki Taneda said, "I don't know why poop is popular," and
suggested a phone call to the Kid's Research Laboratory.

So does the popularity of the makiguso design provide some shocking
insight into the nation's character? What does it signify in a country
where the word for "beautiful" also means "clean," and wearing street
shoes in the house is an offense of the worst kind?

Perhaps the answer can best be summed up by the "gross out"
factor. If it's disgusting and makes adults cringe, then kids love it.
And when kids love it, toy companies rake in big bucks.

Of course, poop in Japan doesn't always mean a sweet treat and
good luck. The prize at a street fair might be an inflatable pink poo
hat, a sort of crapulous dunce cap with a nasty green fly buzzing
overhead. A cigarette dangles from its gap-tooth mouth and out wafts
the slogan "yake kuso"; another pun on yet another word for poop: The
wearer tells everyone "I'm hopeless."

Maybe it is hopeless, trying to make sense of this phenomenon. After
all, if Disney can transform a filthy rodent into Mickey Mouse, and "South Park" can make Mr. Hanky, the Christmas Poo an animated celebrity, then
maybe popularized poop isn't that weird.