John Koehler retired from a career at Hughes Electronics and the CIA to build fast Net connections on satellites already in orbit. 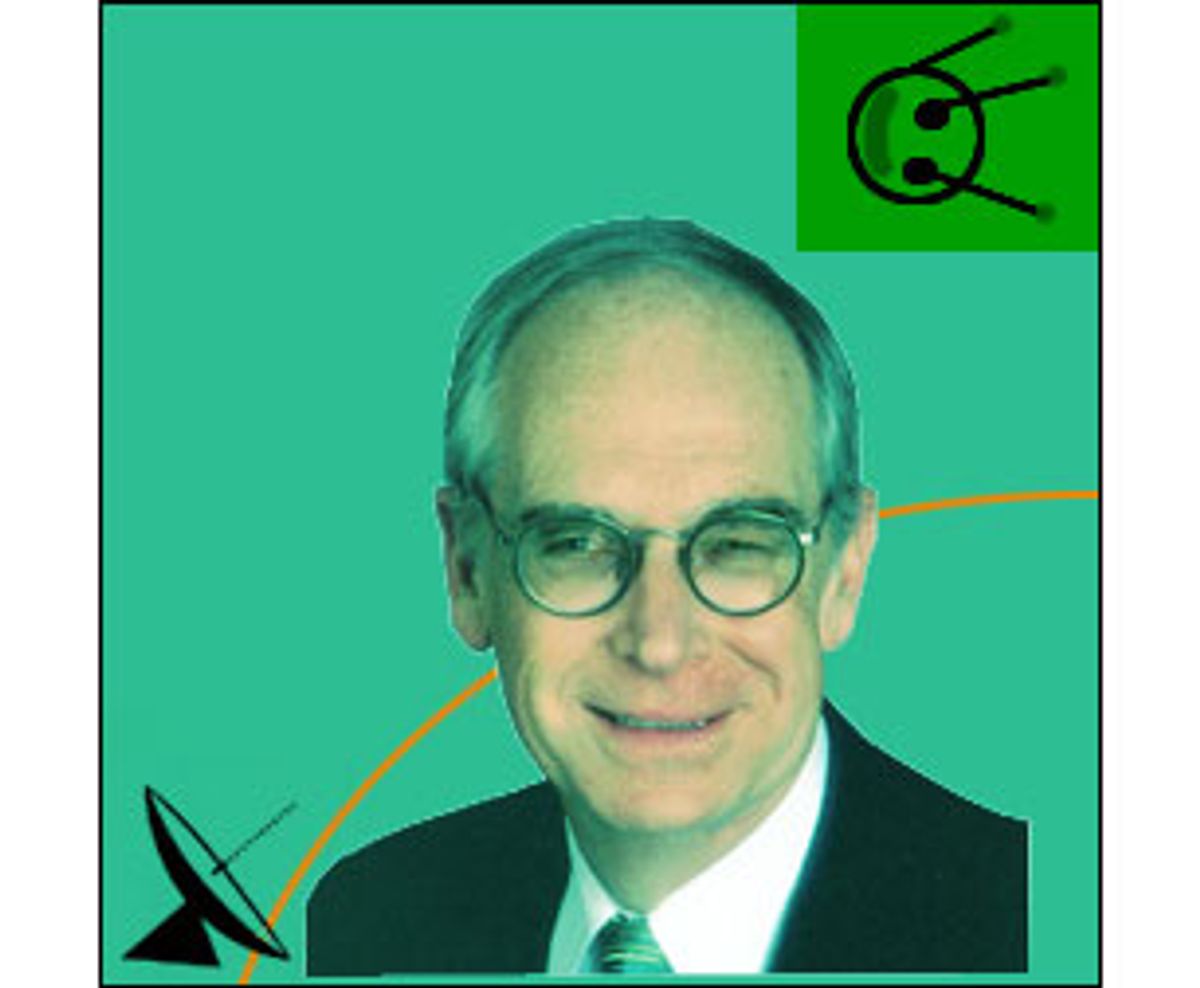 Even though Tachyon.net's satellite-based Internet access service won't formally launch until the New Year, it's already creating some buzz -- the sort of buzz that download rates of 45 Mbps can inspire. For those of us who are a little slow at math, that comes out to something around, oh, 30 times faster than T-1 access.

That alone is pretty spiffy -- but what may be even more interesting is that
Tachyon claims to have figured out how to deliver this, along with a superfast 256 Kbps upload path, via high-flying geosynchronous satellites. Stationed some 22,300 miles above the equator, these so-called "high-flying birds" have historically been considered a poor match for TCP/IP-based Internet traffic because of the considerable time required for signals to travel all that way. (That partly explains why investors like Bill Gates are backing Teledesic -- a $9 billion network of 288 low-orbit satellites, scheduled to launch in 2004.)

But John Koehler, an economist by training (with a Yale Ph.D. to prove it), could see that the demand for fast Internet access, at least at the enterprise level, probably wasn't going to wait that long. And when he did the math, he figured that the pricing for access services could be made a heck of a lot more attractive if a company didn't first have to amortize a $9 billion infrastructure investment. So he formed Tachyon, on the premise that a way could be found to deliver two-way Internet communications via hardware already in orbit.

Thinking out of the box seems to be a way of life for Koehler, who at 58 looks a tad out of place at an Internet start-up. And indeed, an Internet start-up is not the sort of career step one would have expected for a man whose risumi includes stints at the Rand Corp., the Congressional Budget Office, Hughes Electronics and -- get this -- the Central Intelligence Agency. Koehler served as deputy director of the CIA during the Carter administration, when the Cold War was still a going concern and many of the kids making millions today off dot-com IPOs had yet to be born. Clearly, the man marches to a different drummer.

I've got to ask: Did your interest in satellite technology first come into bloom while you were acting as deputy director of the CIA?

Yes, it did. A principal part of that job was managing the budget for the National Foreign Intelligence Program. As you might expect, most of that budget was spent not on spies lurking in darkened alleys, but on things that got launched into space or on computers that got installed in the basement of Fort Meade.

Not very Le Carri, but quite au courant, I'm sure.

Yes, that's exactly right. In fact, making decisions on next-generation systems was a very important part of my job there -- deciding which space systems to modernize, what they should look like, and that sort of thing. Because that meant making system engineering choices, I naturally got involved in satellite technology in a variety of ways.

Yours is not the first company to think of using satellites to deliver high-bandwidth Internet access. Why do you suppose you're going to succeed where others have failed?

Well, we've focused very tightly on doing something that, as far as I can tell, no one else has done -- which is to provide high-performance access at a reasonably low cost and to do it soon, using satellites that are already in orbit. So we aren't building satellites. Been there, done that, I'd just as soon buy those services from other folks. But in order to [provide that access ],
there were some difficult technical challenges that first had to be surmounted -- primarily in order to achieve the price-performance we wanted. And nobody else has addressed the problem in quite that way.

Nobody else focused on providing first-mile access at high speed by satellite. We've seen considerable usage of satellites for Internet backbones, particularly outside Europe and the U.S. But nobody focused on high performance to the end-user locations, which is what's needed now that businesses and other users are embedding Internet applications deeply into their business processes.

Now I've always thought the high latency times associated with transmitting to high-flying birds were supposed to play havoc with TCP/IP, so I wonder what you've done to keep TCP/IP happy.

If you try to handle high data-rate transmissions with that kind of latency in the link, it does play havoc. And because of that, we've developed a variety of new techniques for linking across the satellite -- techniques that both minimize the impact of the latency and reduce the amount of unnecessary TCP/IP chitchat. TCP/IP, as you know, can be very chatty, but you can't accommodate that across a 250-millisecond link. On the other hand, we also knew we had to be perfectly TCP/IP-compliant at end-user locations and wherever we connect into ISPs. So that meant finding a way to leave the packet completely pristine. Which we do. Now that was a hard job, but we managed to handle it.

Why geosynchronous satellites rather than low-flying birds?

Because we want to be in business now -- not in 2005. First of all, I don't have $9 billion, OK? But second, it seemed to me that there's a market need right now and that if we can find a way to use the assets that other people have seen fit to launch, then we should. And so we have.

Historically at least, geostationary satellites have only been able to handle a relatively small number of simultaneous data streams. What have you guys done to solve that problem?

We designed a system that only uses capacity when it's actually being applied to transmit data. Now that doesn't sound like a big deal. But say you're requesting a Web page. You click your mouse and the URL is transmitted through the satellite to our gateway station. In a typical satellite communications environment, you would set up a link. There'd be a couple of communications back and forth, requesting the link, setting it up, and maintaining the link. You'd then use the link for maybe 2 milliseconds to transmit the URL. Then you'd say: "OK, I'm through with the link. Let's tear it down." And there'd be a few more transactions across the link to accomplish that. So you might end up tying up the link for 5 or 6 seconds just to handle a 2 millisecond transaction, okay? That's dumbissimo.

Now what we've done is to create a connectionless system. When you want to transmit the URL, it gets transmitted. The gateway station doesn't get a warning, so it's got to be listening all the time and figuring out if what it's hearing is signal or noise. And then when it thinks it hears a signal, it has to compute like crazy to decode it, verify it, error-correct it, format it, couple it with the other pieces of the transmission, and finally forward it. And that takes a hell of a lot of computing power.

So is it the case that you're using compute power that wasn't readily available before?

That's a piece of it. Computing power capable of accomplishing this at reasonable cost was not available. Also, nobody had really ever tried to do it. We've taken advantage of recent developments in microprocessor architectures. And we've also had a couple of folks who are just fantastic at algorithms and digital signal processing working on ways to squeeze all the necessary computing into relatively low-cost CPUs.

Let's talk a little bit about quality of service. Are you implementing some sort of scheme that customers can use to set a higher priority on especially latency-sensitive data streams?

Yes. "Q of S" [quality of service] is critical for this kind of application for three major reasons. First of all, you need to have a system that ensures people get what they pay for. Second, you have to make sure that people pay for what they use. And then third, the issues that you described, like inter-packet jitter and so forth, need to be addressed. We have a patentable Q of S mechanism built in, so that as each packet is presented for delivery across the satellite link, the system is informed what level of Q of S you ordered, how much of the system's capacity you've been using in the last few milliseconds, and what the current state of congestion is on the system. On the basis of that, the system assigns a priority to your packet.

It appears you've decided to go exclusively after corporate customers and ISPs. Why? Does that have to do with your view of market maturity at this point?

Yes. Also current price performance. That is, at the moment, a high data-rate service for larger users can be delivered at price points which are consistent with business usage. But we believe that, over time, technical developments and the launch of some next-generation satellite systems operating at higher frequencies will permit us to move both the hardware and the service down to price points appropriate for at least the high-end residential market.

The word is that you're deploying initially in North America and Europe. But isn't the satellite sell likely to be easier in parts of the world where the communications infrastructure is less developed?

You're exactly right. And, in fact, we will be rolling out in the U.S. and Western Europe first. Mexico will be very close behind because it's within our satellite footprint, which means we can provide service there at a low marginal cost and service a demand that's already becoming vigorous.

That footprint extends down to the southern border of Guatemala. And we're also already at work on establishing relationships and planning for deployment in South America, in the Middle East, and in Northeast Asia. One of our major objectives is to accomplish an essentially global rollout as quickly as possible.

Some of the areas are relatively easy to develop from a regulatory and political point of view. Some are tougher. Right now, for example, China looks quite complex.

But for all the hassle, it seems that China and Russia may well end up being some of your better customers. As a former deputy director of the CIA, doesn't that seem a touch ironic?

Actually, it's kind of interesting. Starting in 1990, I began doing some business in Russia and shortly thereafter began making contacts in China -- all on behalf of Hughes. And I made no secret about my background. It would have been futile anyway. At least in some of those places, folks in the satellite and communications business always had two jobs anyway, so there was a certain bond. It was sort of like: "I know what you did and you know what I did, but we're not going to talk about it." Yes, it did have a certain deliciously ironic feeling to it.

When does this adventure begin -- with real, live, paying customers?

We are going live with real customers right after the first of the year. We've been doing trials and tests in about 25 locations in the U.S. and Mexico and throughout Western Europe since summer. Our gateway stations in San Diego and Amsterdam are already fully operational. We are, at this point, in extensive design verification and we're testing all the hardware and software. So I'd say we're just about ready for takeoff.