A selection of books sure to charm, delight and inform even the most particular readers on your list. 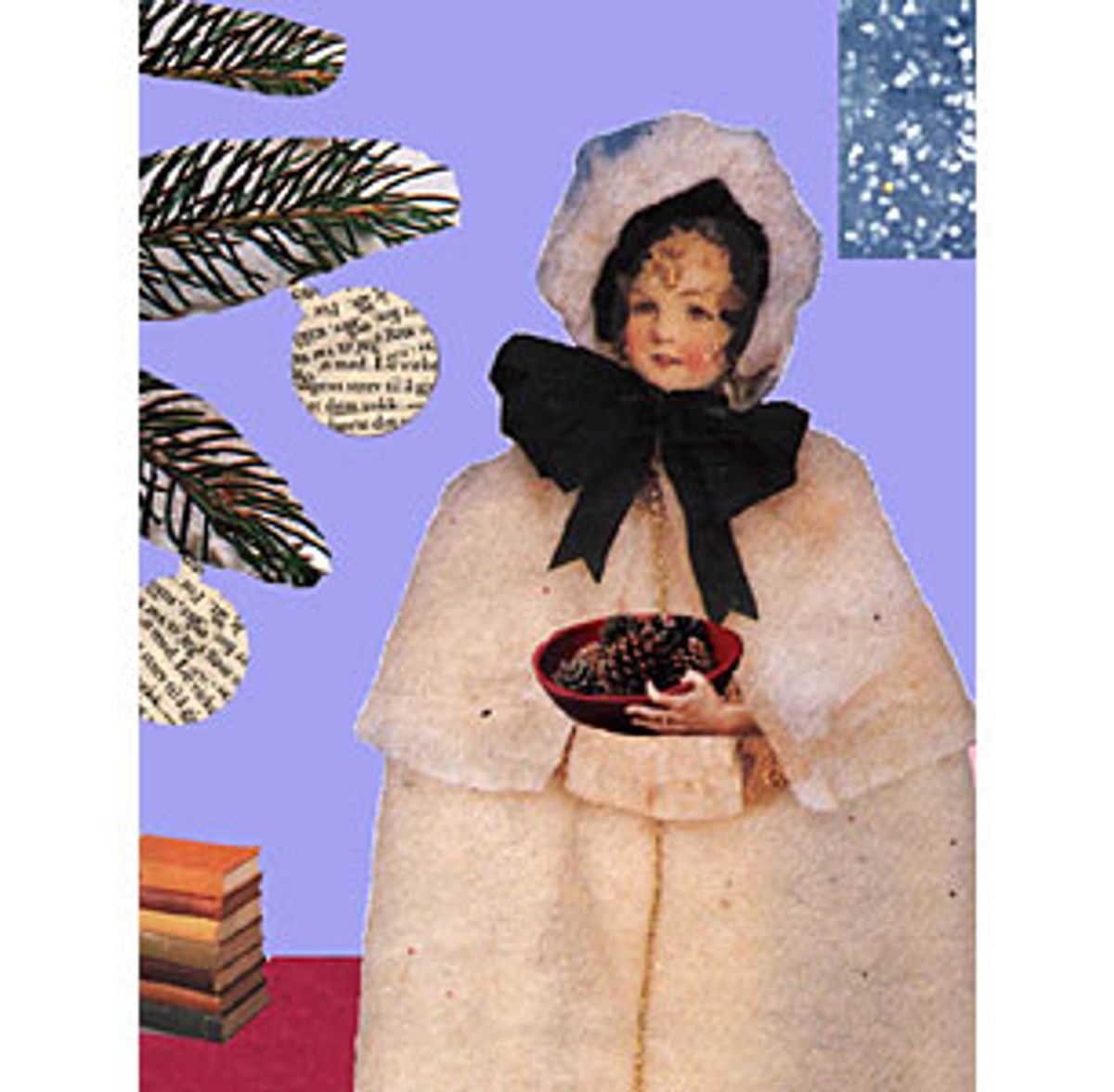 The books that make the best gifts take us back to childhood picture books. They're either oversized or smallish and square, and when you hold them their difference from ordinary books makes you feel somehow different. The pages are thick and smooth and full of stuff to look at while you're reading, or to look at instead of reading. These are books you want to spread out on your lap and take your time ambling through. You needn't proceed chronologically. And you can share them, sitting side by side with someone else.

In tune with the general air of excess surrounding the millennium, this season's gift books sometimes take lushness and extravagance so far they cross over into the outrageous: We don't recommend purchasing "Sumo," the $1,500 Helmut Newton book which comes with a folding table by Philippe Starck. We also took a pass on the mountain of books purporting to review the century that's about to end -- these scream "1999" louder than a ponyskin bag, and we want the books we give to look good on a coffee table for years to come.

The Best of Flair

From February 1950 to January 1951, Fleur Cowles (then the wife of LOOK
publisher Gardner Cowles) published a magazine like nothing that had come before -- and like nothing that has appeared since. Flair covered art, fashion, travel, literature and dicor with boundless sophistication and intelligence. But beyond that, it ranks among the most singularly beautiful magazines ever published, with its trademark die-cut covers (one of them features a maillot-clad cutie spied through cut-out binocular holes), lavish color artwork and bound-in miniature booklets.

"The Best of Flair," which collects highlights from the magazine's all-too-brief existence, is sheer pleasure, representing a dream world where for 50 cents (Flair's cover price) a reader could step through a magic portal into a place where clean graphic design, rich color and boundless imagination ruled the day. This book is a repository of many delights: "A Letter to Americans," a bound-in booklet written and illustrated by Jean Cocteau; a splashily elegant watercolor rendering of Place Vendtme featuring Advent-calendar-style doors that reveal tiny pictures of Schiaparelli's salon and the Ritz bar.

Alas, "The Best of Flair" doesn't come cheap (it's $175). But such grand and gorgeous books don't come along every day. Just holding it in your hands makes you feel as if you've looted Ali Baba's cave.

Buy "The Best of Flair" at B&N.com

Fortune: The Art of Covering Business

Paying homage to a time when magazines regularly produced serious art, both literary and visual, this book of knockout Fortune magazine covers from 1930 to 1950 makes an excellent -- and slightly subversive -- gift for the business-obsessed. These covers show a mind-set worlds away from today's garish business aesthetic. The magazine wanted its covers to depict the world of work, not the world of power. There are majestic, stylized, strangely beautiful (and quite phallic) depictions of machinery, but there are also stunning and humane covers by left-leaning artists, such as one called "African Gold Rush" by Jacob Lawrence and one depicting an Italian labor protest by Ben Shahn.

Buy "Fortune: The Art of Covering Business" at B&N.com

Hammond World Atlas marks its 100th anniversary with a new edition -- only its third. We're told it's now more accurate than ever, thanks to digitization. That's reassuring, but spending time reading an atlas is less about exactitude and more about the age-old, mysterious pleasure of poring over maps, planning imaginary trips, reminding yourself of the distance between things. With satellite photos accompanying the main map of each region, the Hammond Atlas is more irresistible than ever to page through. Our only gripe is the new cover art, which looks like the front of a Jehovah's Witness pamphlet.

The Dictionary of Imaginary Places

By Alberto Manguel and Gianni Guadalupi

You've got to love a reference work with a foreword that begins on this Borgesian note: "In the winter of 1977 Gianni Guadalupi, with whom I had collected an anthology of true and false miracles for a Parmesan publisher ..." This Baedeker of the imaginary world, newly updated from the original 1980 edition, lists over 1,200 locales that never existed, describing them with poker-faced seriousness as if they actually did. With entries ranging from the obvious literary choices -- Oz, Middle-Earth and Shangri-La (with maps, when possible) -- to realms taken from pop culture, like the Marx Brothers' Freedonia, the Beatles' Pepperland and the spooky town of Stepford, this dictionary offers innumerable delights for the browsing reader seeking what Alberto Manguel (author of "A History of Reading") calls "the indescribable thrill that is the true achievement of fiction."

Buy "The Dictionary of Imaginary Places" at B&N.com

There's a gift book for everyone this season, and just to prove it, have a look at this collection of photographs of small, fat, impossibly wrinkled dogs. Jim Dratfield's pictures do capture the essence of pugs, particularly that delightful, mournful, worried look they wear so well. Their anxious faces are eminently suitable for the holiday season: They look the way so many of us feel.

Designed and illustrated by Barry Moser

The appeal of this big, handsome edition of the Bible lies in the engraved illustrations by Barry Moser, a renowned book illustrator and the first artist to take on illustrating both the Old and New Testaments. Moser's meticulous black-and-white line drawings convey starkness and intimacy, grandeur and simplicity. There are 232 illustrations, which, alas, don't seem nearly enough.

Sophisticated-looking and comprehensive in its scope, this beautifully illustrated volume is perfect for serious country music fans. Starting with the likes of Jimmie Rodgers and the Carter Family, "A Century of Country" moves on to address the impact of World War II on country music and covers a variety of subgenres including countrypolitan, rockabilly and outlaw country. It also includes a separate chapter on influential songwriters -- often overlooked in books that focus on country stars.

By Richard A. Minear and Dr. Seuss

This is a genuine find: A collection of editorial cartoons penned in 1941 and 1942 by Theodor Seuss Geissel -- Dr. Seuss -- for a short-lived daily newspaper called PM. It's somehow not at all surprising that Dr. Seuss' cartoons are unbridled in their anti-Fascist, anti-isolationist and anti-racist point of view. Hitler, Mussolini and America First types are all skewered with Dr. Seuss' trademark deadly serious mischief. The figures look like -- and no doubt are -- prototypes for all your childhood favorites. (Uncle Sam seems to have been the progenitor of the Cat in the Hat.) A suitably saucy introduction by Art Spiegelman gives us gems like this: "The cartoons let us know what happens when Horton hears a heil."

Buildings That Changed the World

By Klaus Reichold and Bernhard Graf

Less for serious architecture fans than for armchair tourists, "Buildings That Changed the World" sings the praises of 86 man-made wonders. Highlights include Mad King Ludwig II's fairy-tale-style Neuschwanstein Castle in Bavaria and Gaudm's Sagrada Familia temple in Barcelona (one of the most beautiful churches ever built, and one that looks as if it were made of Silly Sand). The buildings' thumbnail histories are surprisingly lively, especially when it comes to edifices that were originally seen as follies. We learn that opponents of the Eiffel Tower referred to it as a "giraffe cage," an "ugly skeleton" and a "tragic floor lamp."

Buy "Buildings That Changed the World" at B&N.com

By Richard Avedon and Doon Arbus

This book pairs Avedon's clean, iconic photos with his subjects' own words, and the result feels like time travel to the '60s. Famous musicians, writers, artists and dancers share space with civil rights lawyers, the Chicago 7 and GIs in Vietnam. The easy nudity of so many of Avedon's subjects is almost touching -- there's little sense of exhibitionism or the need to shock. Doon Arbus (Diane Arbus' daughter) has selected the quotes, and next to the photos the subjects' words are delightful and often heartbreaking -- guileless, searching, politically impassioned, as unguarded as the expressions Avedon captures on their faces.

Buy "The Sixties" at B&N.com

By David Bailey and Martin Harrison

No one chronicled '60s London as beautifully or as comprehensively as photographer David Bailey. This sublime book includes a generous sampling of Bailey's fashion photography (many of the pictures featuring Bailey's sometime partner -- on- and off-camera -- Jean Shrimpton), as well as portraits of the artists, writers, filmmakers and comics who shaped the era. And his rock 'n' roll portraits are unparalleled in their simple elegance: "Birth of the Cool" includes early pictures of the Who and the Rolling Stones that are so innocent-looking they're sure to break any rock 'n' roll fan's heart.

Edited by Charles Melcher and Steven Diamond, with an afterword by Luc Sante

This sleek, fascinating little book is a collection of black-and-white photographs of people who seem to have been caught unawares -- some in a state of full or partial nudity, some engaged in illicit acts and others simply looking as if they're doing something they know they shouldn't be doing. What makes these pictures (by a variety of photographers including Patrick Demarchelier, Atget and Weegee) so compelling is the fact that they're not overly sleazy (well, not most of them, anyway), but they don't suffer from deadening tastefulness, either. There are spicy pictures of lovers caught in flagrante delicto, but also photographs of women captured innocently straightening their stockings, proving that of course eroticism lies in the eye of the beholder.

Whatever little thing you'd like to know about Marilyn Monroe, you can probably look it up in this oversized, photo-packed, surprisingly cramped-looking tome, under listings such as "Rat Pack," "Mental Illness" and "Funeral." If you're curious about Marilyn's eating habits, be sure to see "What Marilyn Ate" under "Food": A typical breakfast in 1951 consisted of warm milk, two raw eggs and a dash of sherry. Only for hardcore fans or the hopelessly bored.

Buy "The Marilyn Encyclopedia" at B&N.com