"My Century" by G|nter Grass

In a new novel, the cantankerous 1999 Nobel laureate takes on his times, year by year. 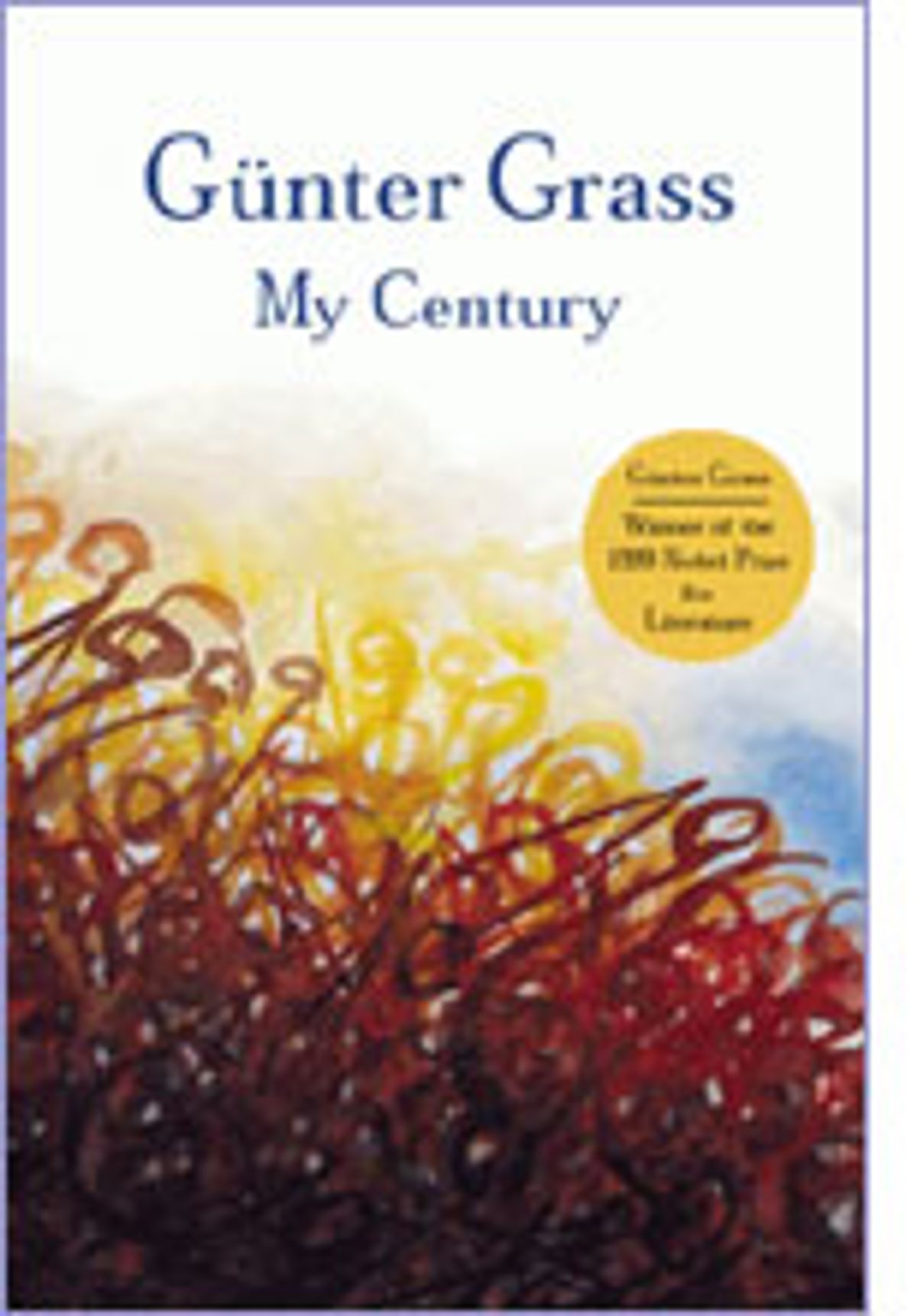 G|nter Grass' new novel, "My Century," is a pastiche of 100 little stories rooted in the political surges of Germany's violent and fascinating past 100 years. Grass has been a Nobel candidate for long enough to know that the prize for literature typically goes to writers with political stances (preferably left of center), so it's possible to see the novel as a shameless bid for laurels: In this double-anniversary year of 1999 (40 years after the publication of "The Tin Drum," 10 years after the fall of the Berlin Wall), in the wake of a book as millennium-gimmicky and politically minded as this one, how could the Swedish Academy not have awarded the prize to Grass?

He deserves it, of course. He should have gotten it years ago, after "The Danzig Trilogy." But the new book has a shrill and personal tone that conjures up Oskar Mazerath raising his glass-shattering voice before the committee: "Hey! Guys! Remember me? Come on!"

"My Century" tells the saga of German history since 1900 in a noisy fugue of voices, with each brief chapter assigned a single year. The "my" in the title is both personal and paternal. Grass turns up as a character 13 times, but the other voices are his as well, in the sense that Grass regards himself as the voice of Germany. It's an immodest conceit, but it holds the book together. Soldiers, housewives, cops, journalists, grandparents, activists, a professor, a dirigible pilot, a businesswoman and ravers in the Berlin Love Parade all contribute their little share to a mosaic of the German nation in war and peace. The result is not a novel so much as a scrapbook of commentary, because what drives you through isn't story or theme -- it's rank curiosity about what G|nter Grass will have to say about some juicy year. This tactic assumes, of course, that you care about Grass or about German politics; if you don't, "My Century" may read like an elaborate inside joke.

He puts both friends and enemies into the book. Willy Brandt, friend and former chancellor, becomes a moral lightning rod for German and Polish racism. One narrator is irritated by "that writer with the walrus mustache" -- that is, Grass; another refers to "the man who's putting me down on paper here and thinks he can give me a grade (social behavior: unsatisfactory)." These bits are funny but shallow. Grass also has a sublime talent for common voices, especially women's, and the best chapters are narrated by salty grandmothers. "1946" is a reminiscence by one of the so-called rubble women who cleaned up Berlin after World War II, brick by brick. "Rubble women," she says. "Not a man in the bunch. Wasn't enough of them. And them that was, they just stood around and did nothing or else ran the black market. No dirty work for them!"

Unfortunately, regional voices never survive translation, and this chapter is a prime example of how much weaker the book is in English. Translator Michael Henry Heym's version of "1946" ends with a simple reunion in a cafe -- "coffee and cake at Schilling's. I always get a kick out of it" -- instead of the original's noisy Kaffeeklatsch of ex-rubble women, with its echoes of personal triumph. "Is immer lustig da," the final line goes in German (literally, "It's always cheerful there"), and that "lustig" stands out after pages of vividly rendered suffering and destruction. The original has not just untranslatable voices but also very translatable overtones that Heym doesn't or can't render. His English tastes like thin beer next to Grass' schnapps.

The chapters that work well in English include accounts of a fictional meeting between war novelists Ernst J|nger and Erich Maria Remarque, who spend a wine-soaked meal (and five chapters) arguing and reminiscing about the First World War ("1914-1918"); escapes from East Berlin through hand-dug tunnels and sewers ("1961"); an elderly banker and onetime collaborator with the Nazis who becomes a punk ("1978"); a retiree who hunts mushrooms in Germany after the Chernobyl meltdown ("1986"); and the Berlin Wall's retirement ("1989"). "My Century" remains a beguiling people's history of Germany as long as Grass resists his urge to go on record with moral and political stances. But Grass, like the Swedish Academy, knows he has a bully pulpit, and when he fails to resist that urge, his novel becomes a book for the moment instead of the ages -- mortalized, you might say, by the master's public squabbles.