A peripatetic seeker reflects on the quest at the heart of the pilgrimage. 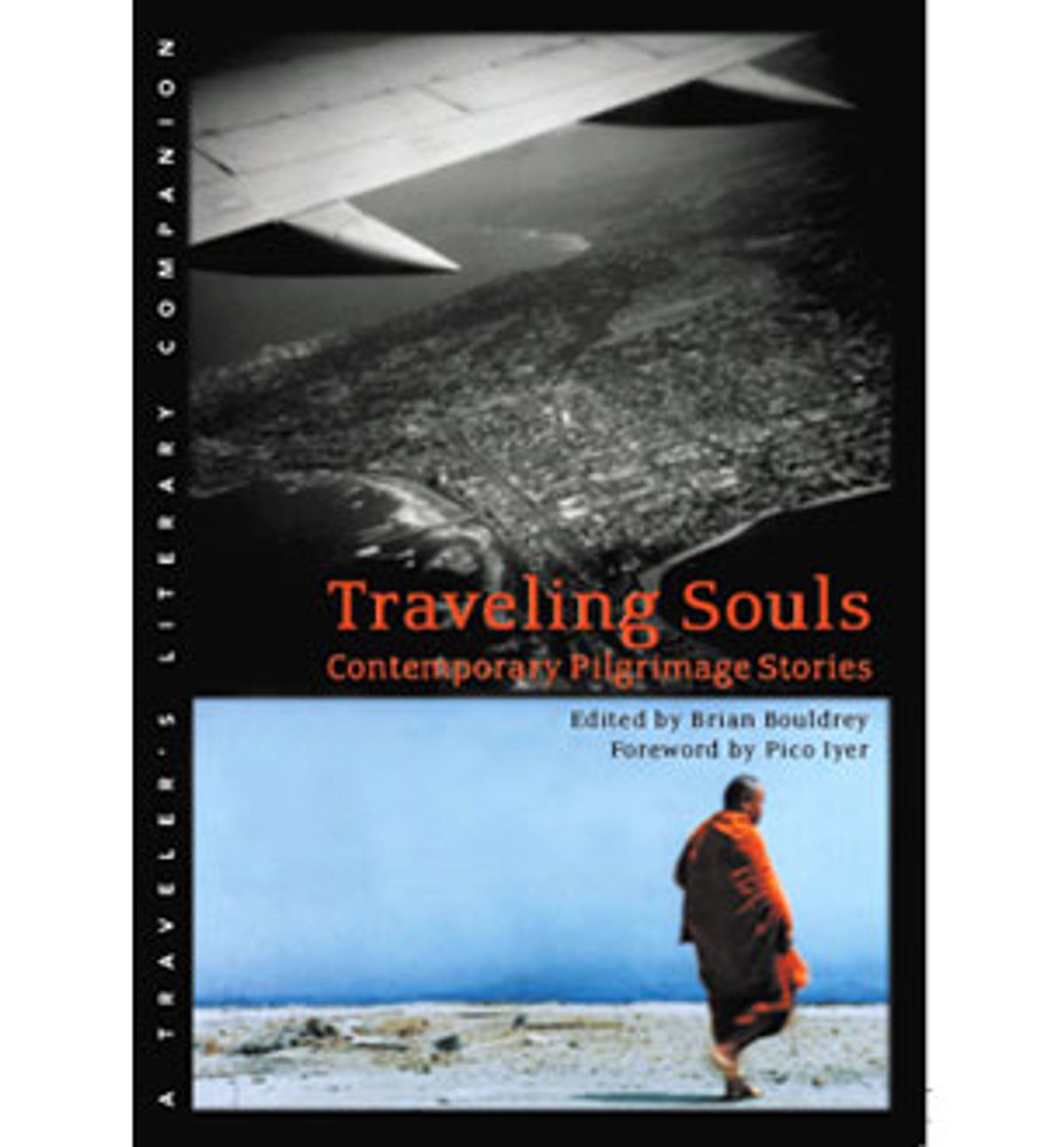 Every journey is a question of sorts, and the best journeys for me are the
ones in which every answer opens onto deeper and more searching questions. Every traveler is on a quest of sorts, but the pilgrim stands out because his every step is a leap of faith, and his journey is through such states as penitence and prayer. Unlike a typical adventurer, the pilgrim seeks not to conquer the worlds he visits but to surrender to them; and unlike a
missionary, he seeks not to preach but, in the silence of his supplication,
to listen. A pilgrim does not have to be moving toward something holy, I
think, so much as toward whatever resides in the deepest part of him: It
could be a poet who gave wings to his soul, or a lover who broke his heart
open. The most eternal pilgrim in literature -- always referred to as such --
is Romeo.

Yet even as the pilgrim thinks she knows where, and why, she's going, the
beauty of every trip is that circumstances are far wiser than she is, and
she seldom ends up where she expected to. Her unseen partner on the road is serendipity. Several years ago, too settled in an office in Rockefeller
Center in New York, I decided to travel to the land I'd always dreamed of,
Japan; I wanted to learn about simplicity and kindness in a monastery. I
flew over to Kyoto, checked into a Zen temple on the back streets and, after
a week or so, found that the routine was much more familiar than I'd
expected. So I stepped out, and instantly found much of the compassion and
wisdom I'd been seeking -- in the modern city all around, the woman standing at the temple gates. God comes to see us, as Emerson writes, without bell.

Like anyone, I've taken my pilgrimages in every direction of my inner
compass, and to every corner of the shrine I carry round inside me. Our
souls are always traveling, of course, and whatever we find in Jerusalem we
could also find at home. Yet the very fact of moving quickens our attention,
and jettisons our habits, in a way that leaves us wide awake to what
otherwise we might take for granted. So I have gone to Taos, to see where D.H. Lawrence conducted his "savage pilgrimage"; to Tibet, where local
pilgrims walk for months on end, across the empty plains, prostrating
themselves every step of the way; to Cambodia, most recently to see how
people live amid ghosts and broken memories. Once, traveling to the rock
caves around Lalibela, in Ethiopia, by mule, through a landscape of cedar
trees and olives, I was humbled to notice that the people all around me had
come on foot, traveling for weeks in dusty robes, while fasting. Why had
they come to this unprepossessing spot? Because, they said, between joyful
ululations, to come here was to come to heaven.

In the mind's eye, a pilgrimage is generally a straight line, from here to
there (from being lost to being found); in practice, however, it is more
often a kind of circle, as in the ritual circumambulations that worshipers
make in Tibet, in India or around the Islamic Ka'ba. A pilgrim's journey,
unlike a traveler's, never ends; it only deepens. That is the thrust of
Bunyan's "Pilgrim's Progress" -- that all our life is a pilgrimage -- and it is
part of the reason, I'm sure, why so many religions have a tradition of
mendicancy and wandering. The great contemporary pilgrims -- I'm thinking here of Annie Dillard and Peter Brook, Van Morrison and John le Carri (a "secret pilgrim," like many of us) -- are all essentially traveling deeper into faith and doubt at the same time: deeper into complexity. In that
sense, it matters little whether they're surrounded by tolling bells or
clanging sirens.

Yet reading the wonderfully varied and unexpected stories assembled here, I
was struck by how much the notion of pilgrimage today has to do with
retrieving a sense of purpose (and simplicity, and constancy); with putting
oneself, quite literally, in the footsteps of the past. Once upon a less
secular time, almost everyone made pilgrimages, and most of the great works of our early literature -- Dante's ascent into the stars, Chaucer's wanderers to Canterbury, the tales of Orpheus and Odysseus and Hercules -- commemorate both inward and outward journeys; these days, I suspect, many of us travel in part to experience pilgrimage by proxy. Most of the travelers in this volume leave home, as I have done, to partake of someone else's pilgrimage, and so to learn what animates people to undertake such sacrificial tasks; the destination of pilgrimage is pilgrimage itself.

It's striking, too, to see how many of these travelers are moving
deliberately backward. They go on foot -- a relative luxury in a time of cars
and trains and planes -- and they travel, often, in simple, anonymous robes,
with a staff, petitioning, as monks do, for their food and shelter. In an
age of flashing screens and jumbo jets, the pilgrim is a traveler into
candlelight. And a large part of the discipline he embraces comes in the
sloughing off of self -- literally (as when Michael Wolfe becomes just
another hajji, generally addressed as Roy Thomas) and metaphorically (as in
Barbara Wilson's searing account of how pain and rage in the desert annulled her previous stories of herself). "Abandon self, all ye who enter here" could be the inscription written on the pilgrim's door; Rachel Kadish's
powerful memoir reminds us that we travel partially to return to selves we
have forgotten, or people we didn't know we were (for worse as much as
better).

Of course the pilgrim, like any traveler, is mostly traveling inside
herself, to a destination not found on any map. Yet there is a palpable
benefit in making the trip physically, on foot: The very feel of stones in
Jerusalem, Alane Salierno Mason says, "has a charismatic effect on the whole body," much as, perhaps, the very act of getting down on our knees releases in us a kind of humanity and sweetness. The wonder, the intensity,
the electricity of pilgrimage are infectious -- passed on like a holy
fever -- and in Michael Wolfe's ecstatic account of making the trip to
Makkah, we can feel the fires burning in every pilgrim's heart (if Wolfe had
stayed in California, he'd have thought his destination was "Mecca").

Distinctions get buried on the road, and the pilgrim is keeping company with kindred spirits from distant centuries and continents; the first pilgrim to Canterbury, we learn here, walking on his knees, was a king, Henry II,
traveling to atone for his execution of Thomas ` Becket. Even here in my
neighborhood in Japan, when I travel to my local temple I am taken out of
the age I know, often, by the sight of yamabushi, or mountain pilgrims, done up in an outlandish shamanic gear of trinkets and cowrie shells and deer skins. The pilgrim moves into a realm of talismans and spells.

In a sense, these powerful souls remind us, all pilgrimage is a trial, and
its adherents are tested by the road; the pilgrim is like the hero in some
classic fairy tale, asked to perform various deeds of heroism and cunning to
prove his love. Except in this case, the person asking is himself. In Japan,
when he was growing up, a 90-year-old Zen painter once told me, children
were taught to pay for suffering (it is such a privilege, and a catalyst for
growth); in our more comfortable cultures, many people have to go abroad, on pilgrimage, to measure themselves against a pain that is reality. The heart of all our faiths is religio, or a rebinding, as the Latin term suggests.

The final thing that hits me, traveling with these contemporary pilgrims, is
how fluid and beyond boundaries our pilgrims are today, in a world that's
stepping across borders every minute: Gretel Ehrlich, a modern American,
treads a Buddhist path in China, just as many Chinese make similar trips of
worship to the Holy Land that is America (founded, after all, by pilgrims,
and "discovered" by another votary who thought he'd come to India). A
Christian learns from Buddhist monks, and agnostics learn from Christians.
I, though born a Hindu, have never been to the Hindu holy place of
Varanasi -- and yet have been lucky enough, in our mobile world, to sit
before Notre Dame and Ayers Rock and the Buddhist caves of Laos. "To study the Way is to study the self," the great Zen teacher Dogen said. "To study the self is to forget the self. To forget the self is to be enlightened by
all things. To be thus enlightened is to remove the barriers between one's
self and others."

At the end of every pilgrimage, of course, you learn that ends are new
beginnings, and that you see only what you brought with you. (Besides, "If
you can understand it," as Augustine says, "then it is not God.") The main
point of climbing to an icy cave in India, where a sadhu sits, is to realize
(as Anne Cushman says) that one might be better off in California; except if
one had remained in California, one would have always had unanswered
questions about an icy cave in India. In any case, whatever is discovered
cannot -- or need not -- be spelled out. "It is in seeking truth that we find enlightenment," the Catholic Father Laurence Freeman writes, "not in declaring it."

Thus the final redeeming beauty of the pilgrimage is that no step on such a
trip is wasted, and whatever happens, however difficult, is good. "To seek
God is to find him," said Gregory of Nyssa, "to find God is to seek him."
Peter Matthiessen travels to Nepal to find the snow leopard and discovers
that the main lesson he must learn comes from not finding the animal; Graham Greene goes to Mexico during the time of the persecution of priests and finds his modern savior in a broken, squalid "whisky priest," who forgets himself by reaching out toward the suffering.

And so we go on taking pilgrimages, in part because every discovery, however unlooked-for, is a step forward; but also, more deeply, because every one of us carries around, inside, a certain, unnamed homesickness, a longing for a place we left and don't know how to find again (the vision seen by Meaulnes in the haunting Alain-Fournier novel, the vanished Shangri-La sought by Conway in "Lost Horizon"). If there is a Golden Age behind us, we believe, there may be one ahead of us too. A pilgrim, ultimately, is a traveler moving toward the light, a light she hopes to collect and scatter across her path; where an adventurer may seek out a distant planet, the pilgrim only seeks the sun.

"All the way to heaven," as Catherine of Siena writes, "is heaven."

Salon Travel Contributing Editor Pico Iyer is the author of "Video Night in Kathmandu," "The Lady and the Monk," "Falling off the Map," "Cuba and the Night" and "Tropical Classical."