As long as he doesn't sound gay

The mayoral candidate who articulated a growing angst in San Francisco may have been hurt at the polls because of the voice he said it in. 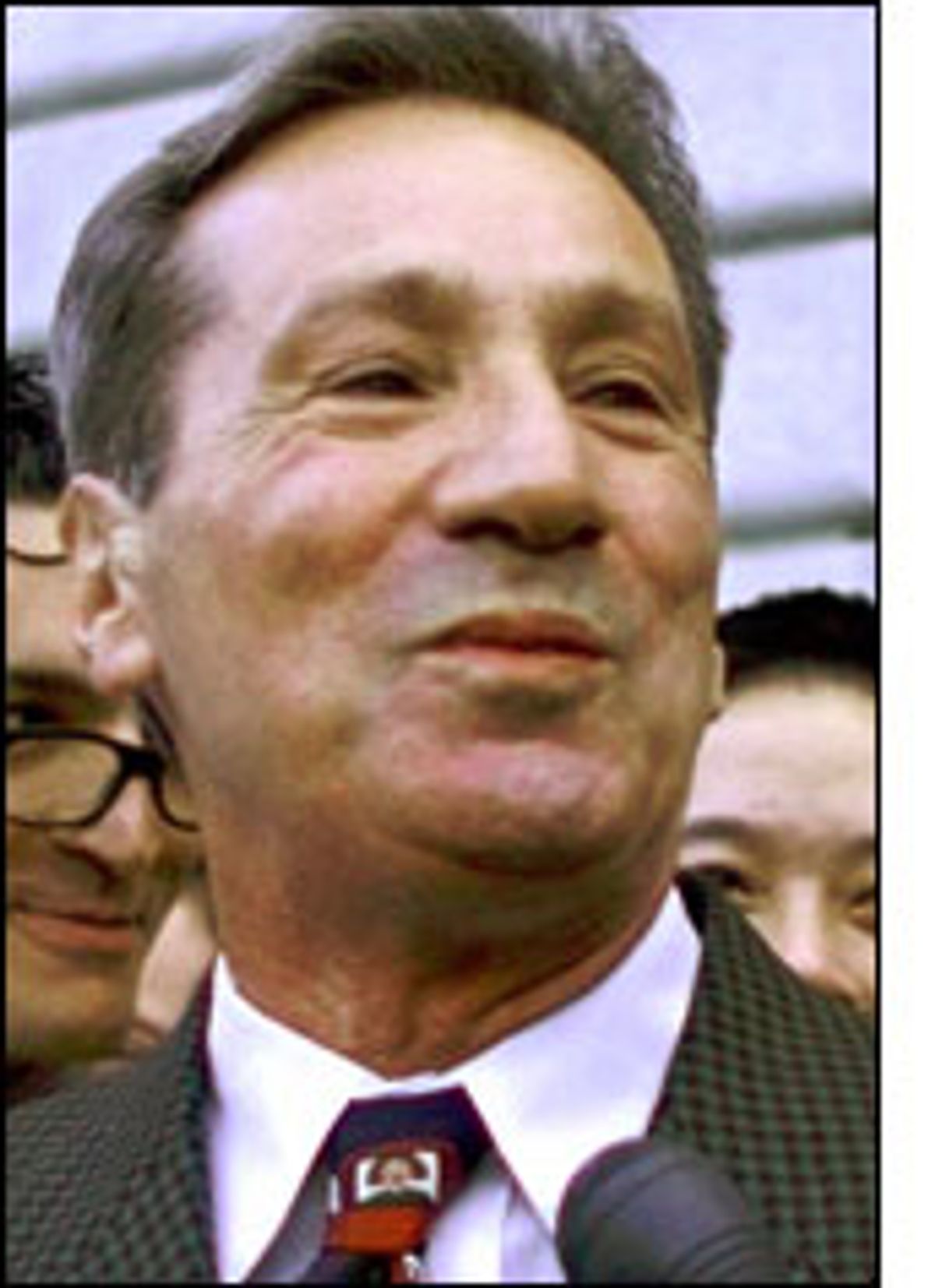 Early in the run-off election for mayor of San Francisco, it became a truism that the contest between straight black incumbent Willie Brown and his white gay challenger Tom Ammiano was not about race or sexual orientation. Like most truisms, this one had a kernel of truth to it.

Even if the papers insisted on referring to the president of the Board of Supervisors as a gay comedian (the mayor was never identified as a black lawyer), voters and candidates kept the focus on rents, taxes, public transportation, planning and development. In San Francisco, an electoral debate over black or gay issues would be like a national election fought over prohibition or red-baiting.

But truisms have a tendency to fray around the edges, and the closer I got to the campaign the more tattered this one began to appear. On the brighter side, there were people, myself included, who wanted to see San Francisco elect the first gay mayor of a major American city. And conversely there were those who didn't think San Francisco should fire its first black mayor.

But in performing a variety of tasks for the Ammiano campaign -- registering voters, staffing tables, walking precincts, getting out the vote -- I came into direct contact with a broad cross-section of San Francisco residents, and the fact is that a number of voters on both sides chose their candidates Tuesday for the wrong reasons.

"You know what this election's about, don't you?" spat a grizzled Hells Angels type whom I was registering to vote in the Mission District, a bastion of Ammiano support. "It's about Willie Brown giving jobs to the goddamn blacks driving the Muni buses."

Of course, that's not at all what the election was about, at least according to an elderly, heterosexual white gentleman who approached me as I was electioneering in the Castro the following night. According to him, the election was about making sure Willie Brown didn't take away firearms from law-abiding white families, leaving the blacks with all the guns.

Ammiano was not the only candidate benefiting from a little voter bigotry. A gregarious but somewhat belligerent black man I tried to register shouted that I must be crazy if I thought he would ever support a homosexual for public office. I tried to turn the discussion to housing and public transportation; ultimately we agreed to disagree.

OK, so I talked to a handful of crackpots and creeps. But some of the less savory criticisms of Ammiano came from my friends. Theirs was a slightly more socially acceptable kind of a gripe, expressed in private, though the issue did surface in the press. The issue was Ammiano's voice. One gay voter I know cited this as a key reason he remained undecided the weekend before the election.

"I know it isn't something we're supposed to talk about in this community, but I just can't get past his demeanor," complained this friend. "He just sounds silly." People could be heard fretting over what an "embarrassment" Ammiano would be to the city. Again and again I heard it, from gays and straights alike: How could we have a mayor with "that voice"?

Over the past several weeks I have spent a lot of time listening to Tom Ammiano's voice. The first time in this campaign it was at a debate before the San Francisco Neighborhood Coalition, at which Brown was a no-show. Ammiano spoke to the group, uninterrupted except by questions and applause, for most of an hour. He was articulate, his answers were detailed and direct, his solutions were innovative, his grievances against the current administration were compelling, and his sympathies were clear. And his voice, the source of so much anxiety and discontent, was that of a big queen.

But I did not find the candidate silly. I found him credible, passionate, knowledgeable, high-minded and apart from a few quips immensely serious. I was not embarrassed, either as a San Franciscan, or as a gay man. "My voice may be high, my orientation may be gay, my politics may be left," Ammiano told his weary, devoted and unembarrassed supporters last night.

"But we are right, and we have moved San Francisco. We have been the voice for people who have been shut out and we will be shut out no more!"

It's fine rhetoric, but is it true? If even the gay voters in this city can't vote for a gay candidate who -- like Willie Brown -- sounds like what he is, how genuine is our liberalism?

Still, most of the voters I encountered in the campaign appeared to be making their decision based on issues rather than skin color or voice. And it was these more thoughtful types I found volunteering on the campaign, a genuinely diverse group -- disproportionately but far from monolithically gay -- inspired by Ammiano's astonishing second-place finish in the general election to believe that voters were not helpless in the face of multimillion dollar campaigns.

Whatever got Ammiano's thousands of volunteers through the door of the campaign offices, it kept many coming back for the duration of the run-off. For some, giving time was the only way to fight back against the torrent of money lavished on the Brown campaign by the Democratic Party machine. Soft money contributions to Brown were expected to top $1 million.

Ammiano spent $20,000 on his last-minute write-in campaign to win a quarter of the vote, forcing Tuesday's run-off. Final campaign expenditures won't be reported until next month, but early reports showed Brown dwarfing Ammiano in campaign spending.

These volunteers, like me, were fired up not about race or sexual orientation but about economic issues that have become acute problems for anyone who doesn't own property or a pile of stock options in an overhyped Internet start-up. San Francisco's growing pains have become a national story.

As the Internet economy continues to drive rents and house prices to astronomical levels, as evictions rise, as congestion chokes the city and surrounding areas, longtime San Franciscans and hopeful newcomers alike find they are being squeezed out of an increasingly homogeneous, monied city. Many of us find ourselves half hoping for the earthquake to come and scare some of this prosperity away. Tom Ammiano unseating Willie Brown seemed like the next best thing.

"So what attracted you to Ammiano's candidacy?" I asked a woman last night after we'd finished calling voters right up to the 8 p.m. poll closure. She mutely pointed to the button on her lapel. It read: "Another terrified tenant for Tom." Most volunteers I queried cited similar bread-and-butter issues. Roughly half said that Ammiano's integrity was what drew them to the campaign.

Another combustible element fueling Ammiano's popular support was the perception that Brown's City Hall has been a four-year free-for-all for well-heeled corporate lobbyists. A fat target for Brown opponents has been his close advisor Jack Davis (gay guy, incidentally), who was revealed to have earned $330,000 from Home Depot in order to lobby the mayor to approve the chain's expansion into San Francisco. Ammiano, a staunch defender of neighborhood businesses against the encroachment of chain stores, refuses to meet with paid lobbyists.

I was drawn into the campaign first by the idea of having a citizen mayor, someone who rode Muni instead of limousines, someone who listened to renters and neighborhood activists rather than big landlords, big corporations and their lobbyists. What helped keep me there was the energy of the Ammiano offices: disorganized sites of passionate arguments, littered with hand-lettered signs, cobbled together with borrowed equipment, they were a time-warp to the political bunkers of the 1970s, where my sister and I could be found tagging along with my mother on her feminist and abortion rights crusades.

The spirit of political activism and street theater, which apart from ACT-UP all but disappeared in the 1980s under the twin burdens of Reaganism and AIDS, is a large part of the San Francisco I grew up in and loved. It was thought to have received its final death blow from the ultracapitalism of the Internet economy, so it took many of us by surprise when it resurfaced with the Ammiano candidacy.

Spirit, it turns out, will be our consolation. Ammiano lost, and badly. But this reluctant candidate met his original campaign goals. Concerned that the rogues gallery of mayoral candidates in November's general election gave progressive voters no reason to go to the polls, Ammiano stepped into the race at the last minute as a write-in candidate with the stated purpose of ensuring passage of a number of lefty ballot measures and helping liberal incumbent district attorney Terence Hallinan in his troubled bid for reelection.

The gambit worked, and the D.A. owed Ammiano again last night, as the very last precincts reporting showed him pulling ahead of his more conservative challenger Bill Fazio by a hair's breadth, buoyed by progressives who came to the polls to support Ammiano. (A final tally is expected later this week.)

The question now is how to retain the momentum of the Ammiano campaign. Looking beyond the season's electoral goals, queer, neighborhood and other liberal activists could be heard, even as the numbers came in spelling out Ammiano's defeat, planning how to consolidate and resuscitate the insurgent campaign's organization for the next progressive cause.

In addition to laying the groundwork for future campaigns, the success of the Ammiano write-in and the sheer energy of the scrappy campaign should remind the local Democratic machine that the left cannot be taken for granted. As the candidate said last night to cheering supporters, "We have moved a mountain. The mountain is still there, but we have moved it."