The beloved book about a mouse with human parents becomes a small wonder of a family movie. 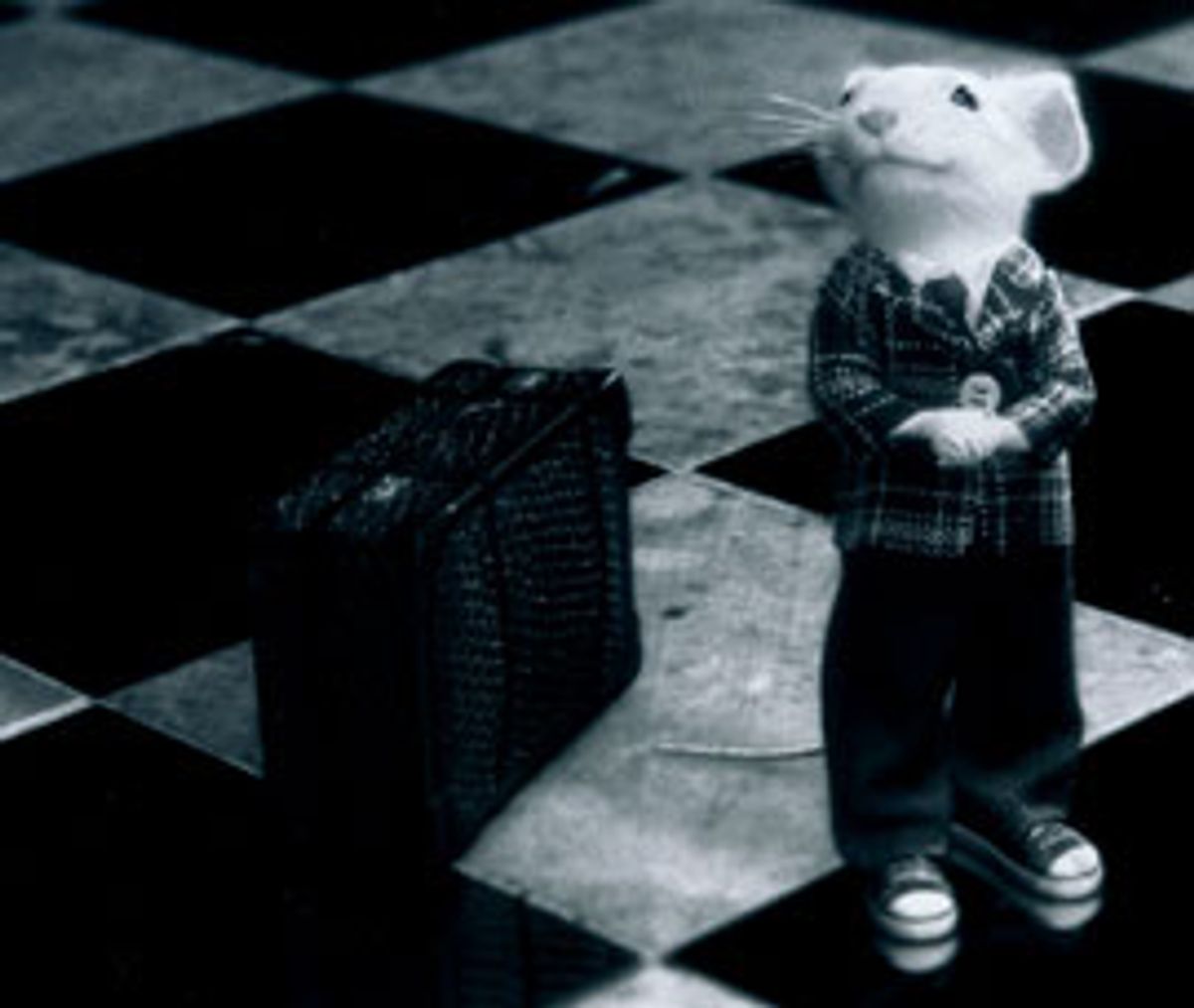 There's something about the idea of being shrunk down small that appeals almost universally to kids, as well as to some grown-ups. What if you could set up housekeeping in a miniature town? Or drive around in a remote-control roadster? What if you had to go to the doll department of the local toy store to find clothes that fit you?

Rob Minkoff's loose retelling of E.B. White's classic "Stuart Little," about a mouse who becomes part of a human family, riffs nicely on those delightful little possibilities, but it has even more going for it than that. Visually, it's simply a pleasure, with its luxe, retro, candy-box look. Its script, by Gregory Brooker and M. Night Shyamalan (writer and director of "The Sixth Sense"), has a little bit of sentimentality for those who crave such things, and a little bit of bite for those who detest it.

And it's kindhearted without being completely toothless. Horrible things almost happen -- as when a gang of nasty cats corners Stuart and are about to do him in -- but not quite. (Not even the naughty cats meet a bad end.) It respects children's capacity for enjoying adventure and suspense and fun, without pushing all their buttons randomly, as so many kids' movies do.

Best of all, it's highly amusing for grown-ups, too. Geena Davis (who, with her bobbed red hair and technicolor suits, looks as if she just stepped out of an old Warner Bros. cartoon), Hugh Laurie and Jonathan Lipnicki are the Littles, a happy little family living in an adorable gingerbread-looking house facing out on Central Park. (Whether you're a New Yorker or not, you'll probably wish with all your heart that this house really existed -- forget that you'd never be able to afford it.)

Mr. and Mrs. Little are looking to adopt a child, a little brother for their son George. When they go to the orphanage (it has the almost cheery name NYC Public Orphanage No. 3), they meet a most unadoptable orphan, a charming and well-mannered mouse named Stuart (with the voice of Michael J. Fox), whom they fall for immediately.

When they bring him home, there are all kinds of trials and travails. After being buried under a pajama avalanche, Stuart gets tossed into the family washing machine. George makes it clear he wants a real little brother, not a mouse. And worst of all, the family cat, Snowbell (Nathan Lane speaks for him, wonderfully), nearly swallows him whole. When the Littles intercede, explaining to Snowbell that Stuart is a part of the family now, his nose gets pushed further out of joint (if that's possible -- he's already a rather flat-nosed Persian type), and he enlists the aid of his street-savvy feline friends to get Stuart out of the way.

At first Stuart, one of those little Animatronic critters, seems to have been endowed with too many aw-shucks mannerisms, too many overly endearing grins that squish up his cute little face. But the more you watch him -- and the more used you get to hearing Michael J. Fox's voice come out of him -- the more you see how he's been clevely designed to mimic Fox's physical capabilities as an actor: There's a casual ease in his ambling stride, or in the way he stuffs his hands in his pockets. It's a nice little touch.

"Stuart Little" is all about family bonds, and about the way people in families who are often very different find ways to connect with one another. To that end, Stuart -- who's so delighted with his new family he can barely contain himself -- tends to deliver lots of sugary little speeches about the importance of family. You can take them at face value, if they mean anything to you. But if not, you can feel free to enjoy the way the dialogue moves quickly and airily, as when, after Stuart makes a declaration that "fairy tales are real," Snowbell deadpans, "Oy. I think I better cough up a furball."

The animal action is lots of fun, too: Steve Zahn lends his voice to one of Snowbell's gang of bad-ass cat buddies, and it's a kick to hear his spacey tough-guy routine translated into felinese.

But the production design of "Stuart Little" (under the helm of Bill Brzeski) is the real miracle to behold, and that's part of what makes it so engaging for adults as well as kids. There's a sequence in which George enters a miniature sailboat he built (manned -- or moused -- by Stuart) in a Central Park boat race. It's impossible to resist the paint-box colors, the reds, blues and greens of these little vessels, dipping, bobbing and clashing among the waves. And what about the mouse house on the miniature golf course, fitted with Dixie-cup lamps and decorated with poster-size (to a mouse) baseball cards?

But best of all are the glimpses of the nighttime New York skyline that we get now and then, from Stuart's point of view. It's a hyperreal vision of that gorgeous jumble of skyscrapers -- flat ones, pointed ones, angular ones -- that stand out, like stark cut-outs all dotted with lights, against the sky. And it's all so fake that it looks magically, wonderfully real. Because the funny thing is, driving over the Triborough Bridge at night, New York looks just like that. You don't even have to be a mouse in a roadster to recognize it.