Bill Belew, the man who dressed the King

The creator of the glorious "Burning Flame of Love" and other sartorial extravaganzas recalls what it was like to design costumes for the messiah of Memphis. 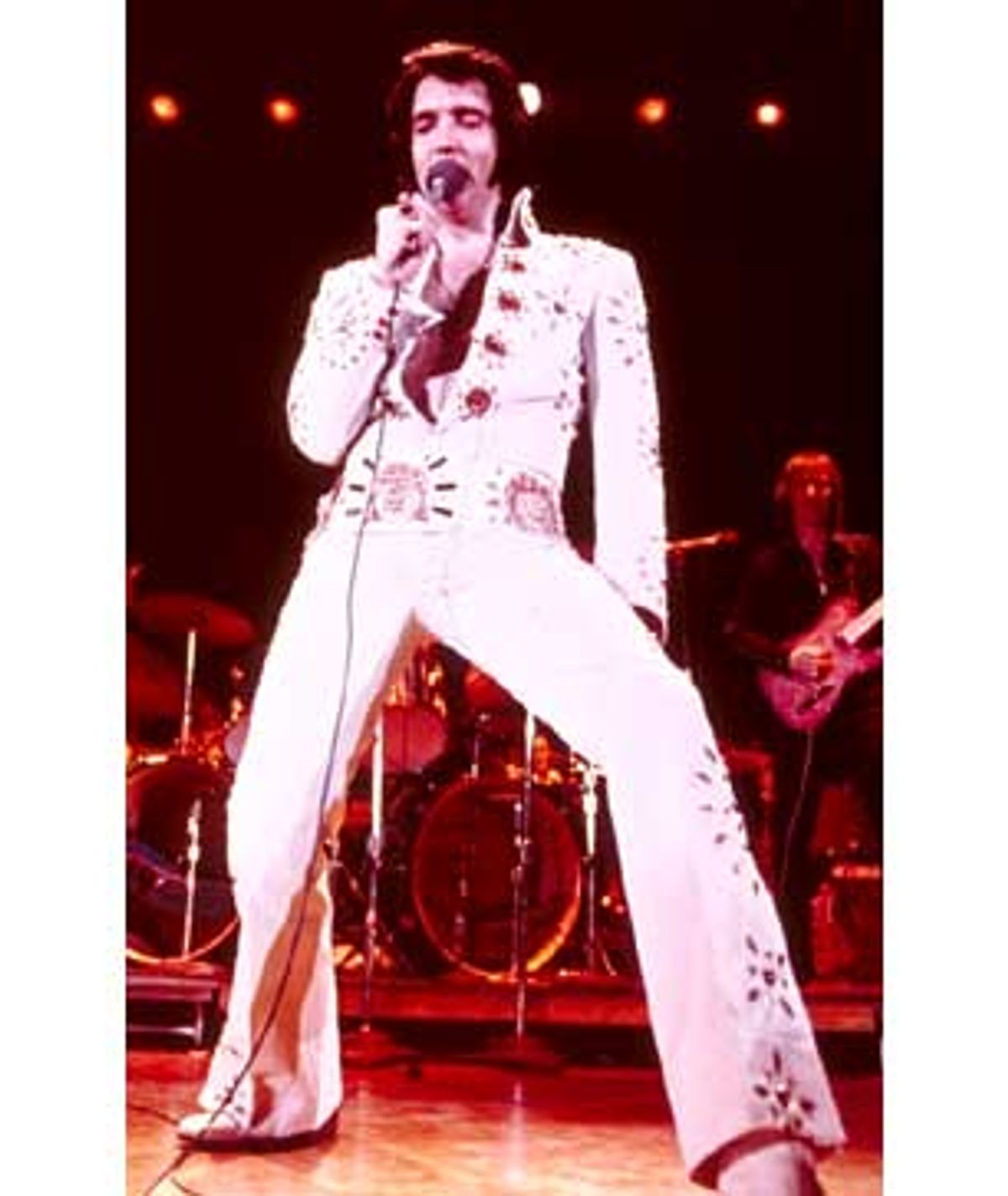 "If the songs don't go over, we can do a medley of costumes."

Some months ago, Rick Lenzi, a California mechanic and part-time Elvis impersonator, was invited to flex his pork chops on "Your Big Break," a spiffed-up, non-lip sync version of the '80s variety show, "Puttin' On the Hits." The program's contestants, who mimic their favorite singers, are aided in their metamorphoses by a small staff of professional costume designers.

Upon arriving in Burbank, Calif., for taping, Lenzi learned that his transformation would be presided over by a man named Bill Belew. At first, the name had merely a familiar ring. Then it clicked. "You're not the Bill Belew, are you?" Lenzi asked incredulously, almost reverently, when the two met.

Lenzi's jaw dropped -- he knew, as any diehard Elvis maven would, that Belew wasn't just any costume designer. He was, in fact, Elvis Presley's costume designer and personal fashion guru for nearly a decade. "I was in awe," Lenzi recalls.

The Belew-Presley union began in 1968, when the producers of Presley's NBC "comeback" special, "Elvis," who'd worked previously with Belew on a Petula Clark production, invited the designer to create some hip threads for the now-legendary program that would herald the swivel-hipped one's second coming. When asked what "look" he envisioned for Elvis, Belew claims he knew almost immediately. "It always seemed like people assumed he wore black leather," he says, "but he never did. He may have worn a leather jacket, but that's about it. At that time, though, we were into denim, and I said, 'What if I just duplicate a denim outfit in black leather?' Elvis loved it." And so the cowhide was procured and fashioned and fitted, then later, after the second stand-up show, pried by Belew with much difficulty from Elvis' sweat-soaked body.

If clothes make the man, then Belew's clothes made The Man -- made him sultrier, flashier, manlier. Following the success of the NBC special, which reinvented Elvis not only musically, but physically, Belew realized what promise there was in this alliance. "He was a great person to dress," Belew says. "He had a terrific build at that point . . . [But] at the time we started in Vegas, everything was Liberace. And I would see these outlandish things with fur and feathers and think, 'That's not going to be Elvis. And if that's what he wants, he can get somebody else.' I wanted the clothes to be easy and seductive and that was it. And I never wanted anything to compromise his masculinity."

Of course, as Elvis' popularity grew, so did his fans' unconditional love. Consequently, Belew felt he had more freedom to produce increasingly intricate and outrageous designs. "I kept most of his things very simple in the early days," Belew says. "We just watched the reaction from the fans, and that's how we began to get more elaborate."

In August 1970, when Elvis stormed Sin City for a triumphant stand at the International Hotel, Belew hunkered amid the capacity crowd, gauging its response to the conch-shell-studded, macrami-adorned, karate-style jumpsuit that Elvis worked expertly as though it were a second skin. Needless to note, it, and Elvis, went over big. Proclaimed a friend of Belew's during the show, "He's like a panther stalking that stage, exuding sexuality."

Almost from the start there had been an unusual level of trust and familiarity between the two. To Elvis, Belew was never Bill, but Billy, and most of his designs were approved on sight, something that shocked and delighted Belew. In part, the fast fraternity stemmed from a shared sense of lineage, as both men were reared in the south -- Elvis in Tupelo, Miss., and Memphis, Tenn.; Belew in Charlottesville, Va. -- by doting, plump ("big-boned," euphemizes Belew) matriarchs with a penchant for all things culinary.

In subsequent years, as Belew's loyalty and talent continued to impress his employer, he became Elvis' personal fashion designer (often spending upwards of $15,000 a month on custom clothing) and confidante. Elvis even bestowed upon him a coveted gold diamond-and-lightening-bolt-festooned "TCB" (Taking Care of Business in a Flash) necklace that was proffered to all the King's men, a small inner circle often dubbed the "Memphis mafia." Says Belew, "I thought, 'Oh, shit, I really have come into it now!'"

As the years passed and Elvis' career entered its high renaissance, Belew, though not under exclusive contract to Presley, was always on hand to conjure up eminently memorable stage outfits, including the fiery, Japanese-inspired "Red Dragon" jumpsuit, the "Burning Flame of Love" and the showy powder-blue number that Elvis wore during his 15-city U.S. tour in 1972.

But perhaps the most memorable get-up of all was the one Elvis sported for his fabled "Aloha from Hawaii" worldwide telecast in 1973. Not only was the outfit white, as they all would be subsequently (white was easier to light), and grandiose and profusely adorned with all sorts of fabulously gaudy trinkets, but its finishing touch was one that would be forever allied with Elvisian lore: The Cape.

There had been capes before this -- the very idea having been inspired a year or so prior by Priscilla Presley, who showed Belew a black and red number she'd bought for her husband on Rodeo Drive in Beverly Hills -- but never anything quite this ornate (it was adorned with a silver mirror-embroidered rendition of an American eagle) or cumbersome. In fact, says Belew of the latter quality, he purposely made two sizes for that reason alone: A hefty floor-length one for Elvis' grand entrance, and a more functional mid-length mantle that would allow the singer a greater range of motion while performing. "It was such a swashbuckling thing, and he just had a way with it," remembers Belew. "Immediately, he knew how he wanted to work it, what he wanted to do with it. And it just all came together."

But it almost didn't. "The night of the show, I got a call from [Elvis' friend and bodyguard] Joe Esposito, who said, 'You're not gonna believe what happened.'" Belew recounts. "And the only thing that came to my mind was, Oh, my God, he split the costume! Turns out he got a little wild during dress rehearsal and threw the short cape into the audience."

As if that wasn't enough, Esposito also informed Belew that when Elvis had tried on the long version, it was so heavy he literally couldn't stand, much less strut about the stage. "He told me Elvis was lying on the floor, roaring with laughter," Belew says. To compound matters even further, Elvis, generous to a fault, had given away his large white bejeweled belt, which bore the eagle motif in miniature, to a friend, the wife of "Hawaii Five-O" star Jack Lord.

It was, in short, sartorial pandemonium. So Belew, who'd remained in L.A. to invent frilly fashions for comic Flip Wilson's popular character, Geraldine, quickly gathered his wits, marshaled his troops and in less than a day, had a new ensemble ready to ship off to Hawaii. Initially, Esposito offered to send Presley's private jet to fetch costume and costumer and whisk them off to Oahu. But since Belew was busy dolling up Wilson, he sent a colleague to deliver the goods. "I was told that [Elvis' people] had two first-class tickets waiting for him," Belew recalls with a hint of envy. "One for him, and one for the belt and cape. Here I am dressing Flip as Geraldine, and he's flying to Hawaii to bask in the sun and have a great time. We joked about that for years."

Belew remained Presley's designer for another four years, occasionally, surreptitiously, adjusting garments to accommodate the King's burgeoning girth. But the Count of Monte Cristos never caught on. When Elvis died in August 1977, wakes were held at Graceland and throngs of grieving mourners filed past Elvis' coffin to pay their final respects. For his farewell performance, Presley was dressed in a simple white suit, a gift from his father. It was the first time in years he'd worn attire which had not been designed by Belew.

Now 71, Belew, semi-retired in Palm Springs, Calif., occasionally lends his talents to various productions. But he does so mostly to keep himself busy. A fixture among the music, film and theater set for nearly five decades, he has enjoyed an unusually long and fruitful career, during which he has dressed the likes of The Band, Lena Horne, Ella Fitzgerald, Gladys Knight, Milton Berle and scores of others. But the pinnacle of his life, he says, was his years with Presley.

"He was one of the few people I've designed for who was able to carry it off," Belew says of Elvis' innate ability to animate the fashion extravaganzas the costumer created for him. "To this day, people say to me, 'So you're the one who put Elvis in rhinestones and all that.' And I just say, 'Yeah, I'm the one.'"

Mike Thomas is a longtime arts and entertainment staff writer for the Chicago Sun-Times and author of the critically acclaimed oral history The Second City Unscripted: Revolution and Revelation at the World-Famous Comedy Theater.