Not even foxy sociopath Angelina Jolie can save this nut house drama. 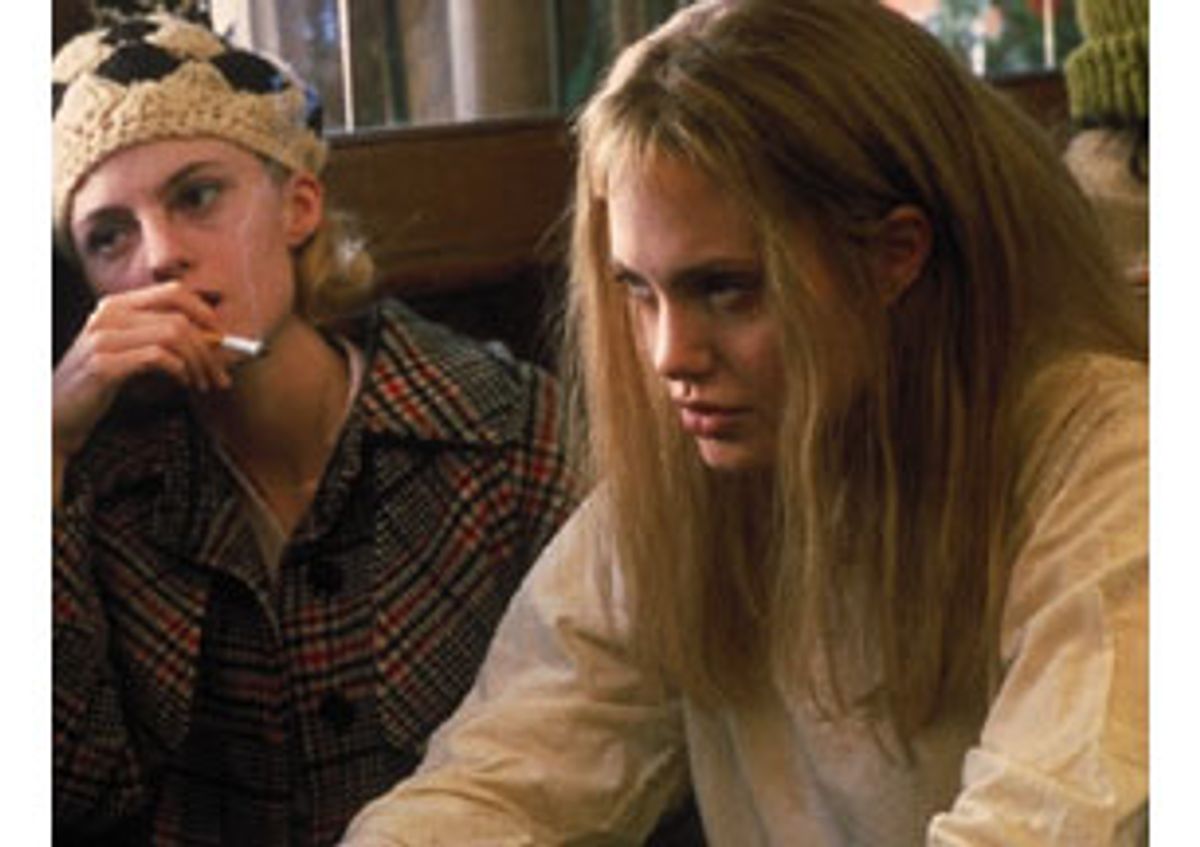 James Mangold's "Girl, Interrupted" would like us to believe that the mentally unstable are different from you and me. They're deeper, wiser and brimming with great truths -- they've just run a little off the rails. Because of their ability to see the truth, they often make excellent writers, and it's their job to reveal never-before-seen angles of reality through their diary entries and trenchant remarks.

That's exactly what Winona Ryder, as 17-year-old Susanna, does in "Girl, Interrupted," a movie about the blurry fringe of insanity that has it all: a hyper-perceptive heroine who probably isn't crazy, just misunderstood; a righteous, knowing and long-suffering nurse with the ability to knock sense into her charges; and a wardful of assorted troubled souls, each with her own special brand of maladjustment. From the first frame, it's easy to see where "Girl, Interrupted" is headed: Someone flew over the cuckoo's nest -- and phoned a movie in somewhere along the way.

"Girl, Interrupted" is based on the bestselling memoir by Susanna Kaysen about her own institutionalization in the late '60s, but it's so jazzed up and so ornately embroidered that the book's rather delicate tale is completely muffled. Kaysen's book may have been marketed as a Sylvia Plath-style meditation on the tenuous connection between creativity and madness, but it's really more modest than that: If nothing else, it works simply as an intriguing chronicle of two years that somehow dropped out of one young girl's life, for reasons that she accepts but doesn't fully understand, not even some 25 years after the fact.

Susanna is committed to a rather benign-looking New England psychiatric hospital -- called Claymoore here, but actually the Massachusetts hospital McLean -- after downing a whole jar of aspirin and chasing it with a bottle of vodka. "Maybe I was crazy. Or maybe it was just the '60s. Or maybe I was just a girl -- interrupted," she intones in voice-over as we see a tube being shoved down her throat after the halfhearted suicide attempt. Of course, she comes from a repressed household where respect for propriety seems to rule the day. She's had a sexual encounter with an older married man and slept with a sensitive young stud (Jared Leto) who, if you squint, looks like Mark Lindsay from Paul Revere and the Raiders. Somehow her mix of symptoms -- among them "promiscuity" -- have caused her to be diagnosed with a "borderline personality disorder."

When Susanna arrives at Claymoore, a beaming nurse (Whoopi Goldberg) in an Angela Davis hairdo and crocheted poncho stands by, waiting to greet her warmly. Inside, she meets a whole stable of unstable girls: Polly (Elisabeth Moss), who's been forever scarred by self-inflicted burns; Daisy (the beguiling and unsettling Brittany Murphy), with her weird penchant for roast chickens and laxatives; Georgina (Clea Duvall, in a performance that cuts across the movie's sodden conventionality with its openness), a pathological liar who adores L. Frank Baum's Oz books; and most memorable of all, Lisa (the astonishing Angelina Jolie), a foxy sociopath who just can't find her way in the real world.

Together the girls go out for supervised ice-cream outings (where they giggle hysterically when the clerk asks them if they want nuts on their sundaes) and wander the hospital's mysterious underground tunnels, which just happen to harbor a hidden bowling alley. Occasionally, unpleasantness rears its ugly head: Cruel words are spoken; suicides are attempted and completed. And through it all, the perceptive Susanna scribbles and draws in her journal. She's going to be a writer, she announces to anyone who asks, and by golly the little minx just might make it.

But you can almost feel Mangold's panic when he feels the story might be losing steam: It wouldn't have been enough just to have the girls interacting with each other during their commitment; they have to have adventures, too. And Ryder, whose performance consists almost solely of turning on that wide-eyed, bewildered-doe look, gets her big moment in an embarrassingly overplayed scene where she confronts Nurse Whoopi with a flurry of heartless, nasty insults. (You can be sure this righteous black woman sets the snippy white girl straight -- but with excessively quiet dignity of course, just in case we're not hip to the concepts of irony and contrast.)

But "Girl, Interrupted" is always worth watching when Angelina Jolie steps to the fore. Somehow, she takes a thuddingly ill-conceived role and turns it into gold: Lisa is the bruised and beautiful troubled doll who's unfailingly charismatic (when she lifts a cigarette to her lips, a nurse stands at the ready with a lighter), the restless girl who's always trying to escape from the confines of the hospital, who blurts out the blunt observations no one wants to hear. The movie tries to set her up as the sacrificial lamb -- the battered innocent who's saner than anyone, but who just has no concept of what's appropriate or acceptable in this sad society of ours -- but Jolie squirms out of those restrictive bonds at every turn. Just the way she prowls the hospital hallways, insectlike, with impossibly long legs, speaks of a kind of confidence that none of the other girls, even on their sanest days, could ever approach.

She's funny and sly in the way she doles out the girl's personal folders after they've staged a nighttime break-in of their shrink's office, flirting with them, putting them down, keeping them eternally in her power with the sheer beauty of her swollen lips and sooty eyes. Jolie is exactly what "Girl, Interrupted" sorely needs: She substantially ups the glamour quotient of mental instability, which is why, for Susanna's story to resolve itself, she must be smitten down. As Jolie plays her, Lisa is the great fierce center of "Girl, Interrupted." Ryder's Susanna is just the mouse that roared. Unfortunately, though, she's the one who's holding the notebook.