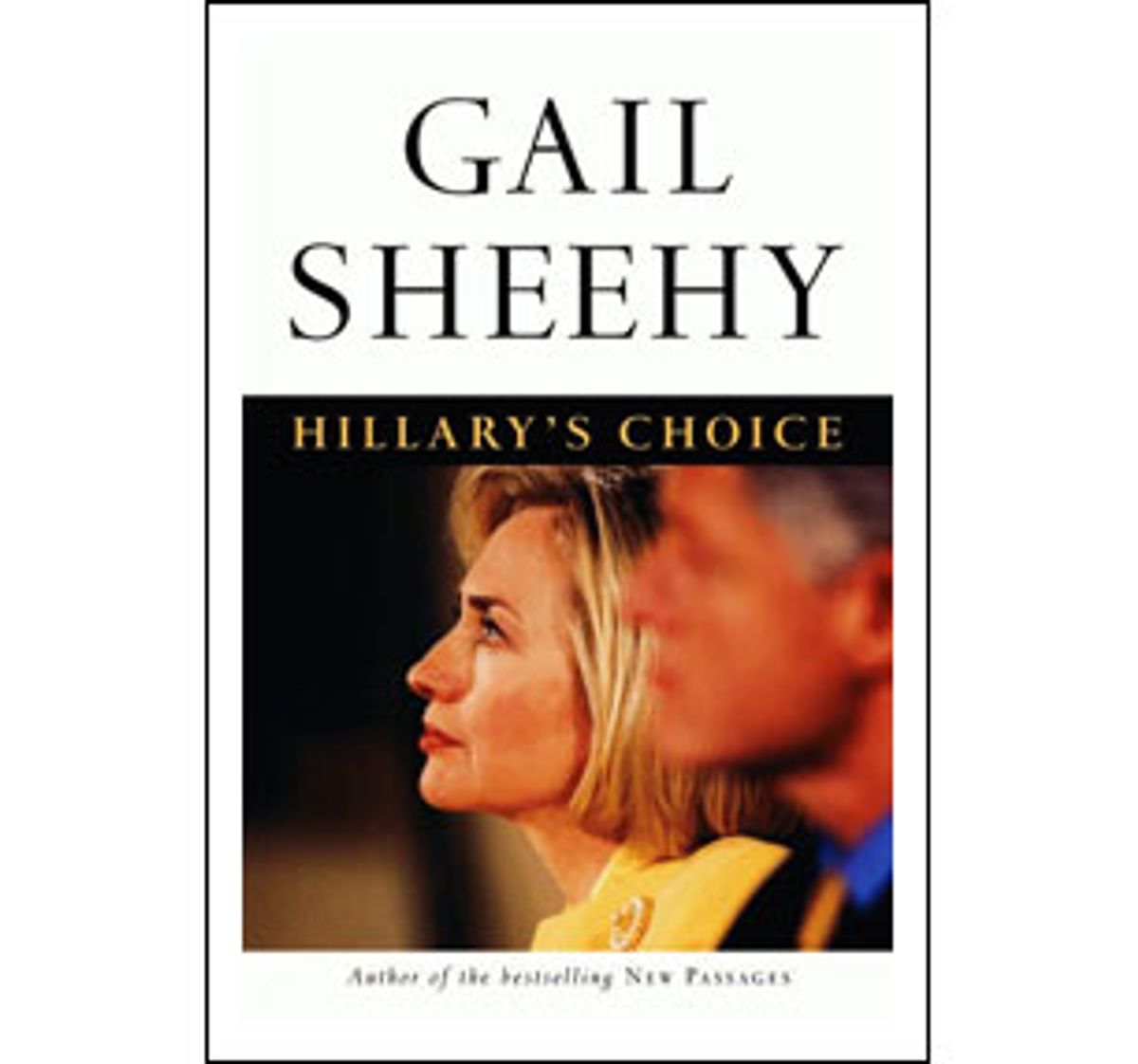 The difficulty with Gail Sheehy's biography of Hillary is right there in the opening sentence: "When under siege she rises early, dresses quickly, and cauterizes her emotions."

Forget that the metaphor is infelicitous. (I suspect the idea is that emotions are like blood; but then to block them the cautery should be applied to their source, perhaps the limbic system.) Set aside that the chapter is about an appearance on "Today" in January of 1998, when, according to Sheehy, Hillary still disbelieved the Monica allegations and so could express affect freely, namely anger at Bill's enemies. Ignore that much of the rest of the book draws on psychoanalytic concepts (splitting, dissociation, denial) that presume unacceptable feelings are unconscious and so do not need willful stanching.

The insuperable problem in that first sentence, as in the rest of the book, concerns the sort of knowledge required for one person to be sure that on a given morning -- or characteristically, on many mornings -- another person has shut off disturbing emotions. Sheehy promises the reader a close, personal, highly particular understanding of the first lady's emotional life, and then (thankfully, one might add) she cannot deliver.

Sheehy's intent in "Hillary's Choice" is to write psychobiography. She never focuses for long on politics. The question that interests her regards the first marriage: Why did Hillary pick Bill and why has she stayed with him? The answer Sheehy proposes is at the level of the hypotheses of a psychotherapy: Because in childhood her father did not give her enough praise, in adulthood Hillary became addicted to an emotionally abusive relationship. To satisfy that addiction, Hillary has had to ignore the obvious -- her husband's character flaws and his philandering. The choice referred to in the book's title is "not to know what she knew."

For this analysis to be credible, it would need to be buttressed by evidence of a most intimate sort. Yes, it is a commonplace of pop psychology that empathic failures between parent and child, even ones that fall far short of outright abuse, create in the child an inner emptiness often filled in later life by addiction. But that belief is not an unquestioned truth; it is a distortion of theories largely traceable to a variant of psychoanalysis called self psychology.

The central concept of self psychology is "mirroring," an exact resonance between mother (usually) and child. The theory has it that imperfect mirroring causes deficits in the child's self. Treatment, under this model, requires an effort at exquisite attunement on the part of the therapist. The self psychologist wonders not how most people might have experienced an event but how this patient did in fact experience it. The empathic stance requires openness to idiosyncrasy. What might seem an insult to most people may go unnoticed by this patient, and what conventionally seems supportive may cause outrage. Surprise is a common experience in the practice of self psychology -- the constant rediscovery of difference.

Of course, biography is about idiosyncrasy and difference. Like psychotherapy carefully done, skillful biography will show evidence of the most subtle listening. Sometimes a writer will have access to a subject's diary or (as in the case of Diane Middlebrook's study of Anne Sexton) even tapes of a subject's psychoanalysis; like a therapist, the biographer sits with this intimate testimony until it gives forth an impression of ways in which the subject's character or choices reflect her development. But despite hundreds of interviews, Sheehy has failed, with a single exception, to find anyone able or willing to give convincing evidence about how Hillary's mind works.

"Hillary's Choice" is very much biography from the outside in, a method that is especially unsatisfying in the case of a modern political figure whose public appearances are scripted. The sort of context Sheehy provides is immediate and journalistic. A typical sentence relies on irrelevant local color to lend verisimilitude: "An hour after giving Bill his slap on the wrist, Hillary -- soft and feminine -- entered the Pork Producers Rib Feed in Pierre." "Hillary's Choice" often has the feel, and the substance, of an extended women's magazine article, a just-between-us-girls dishing about Hillary's strengths and foibles, in which continual references to what Hillary wore are meant to signal truths about psychic change. When the "First Bosom," as Sheehy calls it, is revealed by dicolletage, we are to understand that Hillary is at last in touch with her femininity or that she has become carefree and assertive -- in brief, ready to reclaim her man and have a run at the Senate.

Sheehy does provide a private look at Hillary in college, and here she has achieved a journalistic coup, albeit one that may make readers uneasy. While at Wellesley, Hillary corresponded extensively with a close high school friend, then a Princeton undergraduate, John Peavoy. Sheehy was given access to 30 of these letters. They reveal a young woman who is driven, intellectually curious and often disdainful of those around her. Hillary is in a constant identity crisis centered on her ambitions. Will she be a mainstream political leader or a social reformer? Her type, she seems to decide, is the "compassionate misanthrope," someone out to help mankind but who does not like particular people very much.

If ethical squeamishness can be put aside, what a reader would most like is access to fuller texts of these letters. As excerpted, they are noteworthy for what they lack, the sturm und drang of adolescence, joy or disappointment in relationships, evidence of any insight into other people, even Peavoy. Here (and really only here -- Sheehy rarely manages to breach Hillary's privacy) is the sort of particularity that might interest a self psychologist: Few undergraduates would send off 30 letters empty of personal upset except as it relates to coursework and career.

Hearing Hillary's private voice in this correspondence, it is hard to put stock in this business of cauterizing emotions. Where did Sheehy get the impression that Hillary needs to squelch her feelings? Young Hillary Rodham has self-doubts, and she suffers a minor February depression, characterized by sleeping too much -- she is quite open with Peavoy about this. But for the most part she does not "do" -- or get -- affect. Hillary wonders what happiness is. She is outraged by Wellesley's muted reaction to the murder of Martin Luther King, but there is no hint in these letters of any personal feeling that would bear suppressing.

Though Sheehy does not see it this way, she has gathered reams of testimony to Hillary's lack of emotional awareness. Commenting on one or another social interchange, friend after friend says that Hillary was just out of it. In childhood, Hillary often appears socially inappropriate, bragging and putting other kids down. Of Hillary in adult life, one colleague says, "She can talk about the finer points of education policy but not notice her best friend might be suicidally depressed."

This last comment is especially disturbing in light of Vince Foster's relationship to Hillary. According to Sheehy, Foster adored Hillary, and she was as close to him as she ever was to anyone. A White House staffer tells Sheehy that Foster was obviously nonfunctional at the end. Hillary seems not to have noticed -- although Sheehy has nothing to say on the topic.

Nor has Sheehy a clue as to how Hillary responded to Foster's suicide. Here is Sheehy's effort: "One can only speculate on the complex emotions Hillary might have felt: sadness, loss, guilt, but also anger ..." Sheehy's method is to say that her subject is particular and extraordinary, but then to attribute to Hillary a conventional response to any given event.

The central thesis of the book, that Hillary so craved a father's affection that she had to blind herself to the flaws of men she loved, seems similarly arbitrary -- unanchored by any personal, private evidence. I do not pretend to know more than the next person about Hillary, but reading "Hillary's Choice," it strikes me that the critical relationship to her father may not be trauma but resemblance.

Hillary seems like Hugh Rodham in not being especially focused on the nuances, or even the broad strokes, of social intercourse. She may be less self-destructive than constitutionally insensitive -- mistaken in her reading of social cues and, at the same time, focused on career rather than romance. In a man, these traits would be unremarkable; men who have them often marry, and stick with, women who are needy and flamboyant. The less emotional spouse needs enlivening and is willing to pay a price to get it.

From the outside, it does seem a terrible shame that Hillary married Bill. She was a brilliant student and a committed liberal -- the sort of woman we could have used in politics over the past 30 years. Her friends protested bitterly when she drove to Arkansas to marry Bill. Hers is a choice too many bright women in her generation made, at a critical moment letting go of a chance at an independent career. Many pressures led in that direction. Hillary made her move willfully and without looking back. Whether she did it with her eyes open is less clear.

As psychological evaluation, Sheehy's book is hard to make sense of. She seems to have relied in part on the judgments of an unnamed mental health professional close to the Clintons (my colleague Susan Blumenthal is mentioned in the acknowledgments as having "cooperated to the degree [she] could without incurring the first lady's wrath"), but not to have digested the elements of the assessment.

Throwing its unsubstantiated psychological formulations aside, the book has interest precisely because it is confusing. Beyond the unnamed mental health professional, no one interviewed knows what to make of Hillary. Was she prematurely adult as a child, or reluctant to grow up? Is she a political genius or a bungler? Perhaps the important evidence about Hillary is her failure to succumb to biography -- her remaining out of focus.

Hillary may be a tragic everywoman, a romantic felled by injury and addiction; but Sheehy does not seem to know Hillary in a way that would allow her, or her readers, to decide. People are hard to know. Hillary might be Richard Nixon, hungry and self-defeating, but then again she might (surprisingly) have about her a bit of Ronald Reagan. Yes, she seems a fuller person than Reagan did. What I have in mind is Reagan's ability to elicit projection. Those who liked him ascribed feeling to Reagan -- sympathy, concern -- that was invisible to those who disliked him. I wonder about Hillary and her emotional conflict. Did she make a choice, or did she just mistake aspects of her husband's character?

Peter D. Kramer is the author of "Listening to Prozac" and, most recently, "Freud: Inventor of the Modern Mind." He practices psychiatry in Providence, Rhode Island, where he is Clinical Professor of Psychiatry at Brown University.