Late night at the Long Gun

Something let me watch the Bangkok sex shows without losing my lunch. 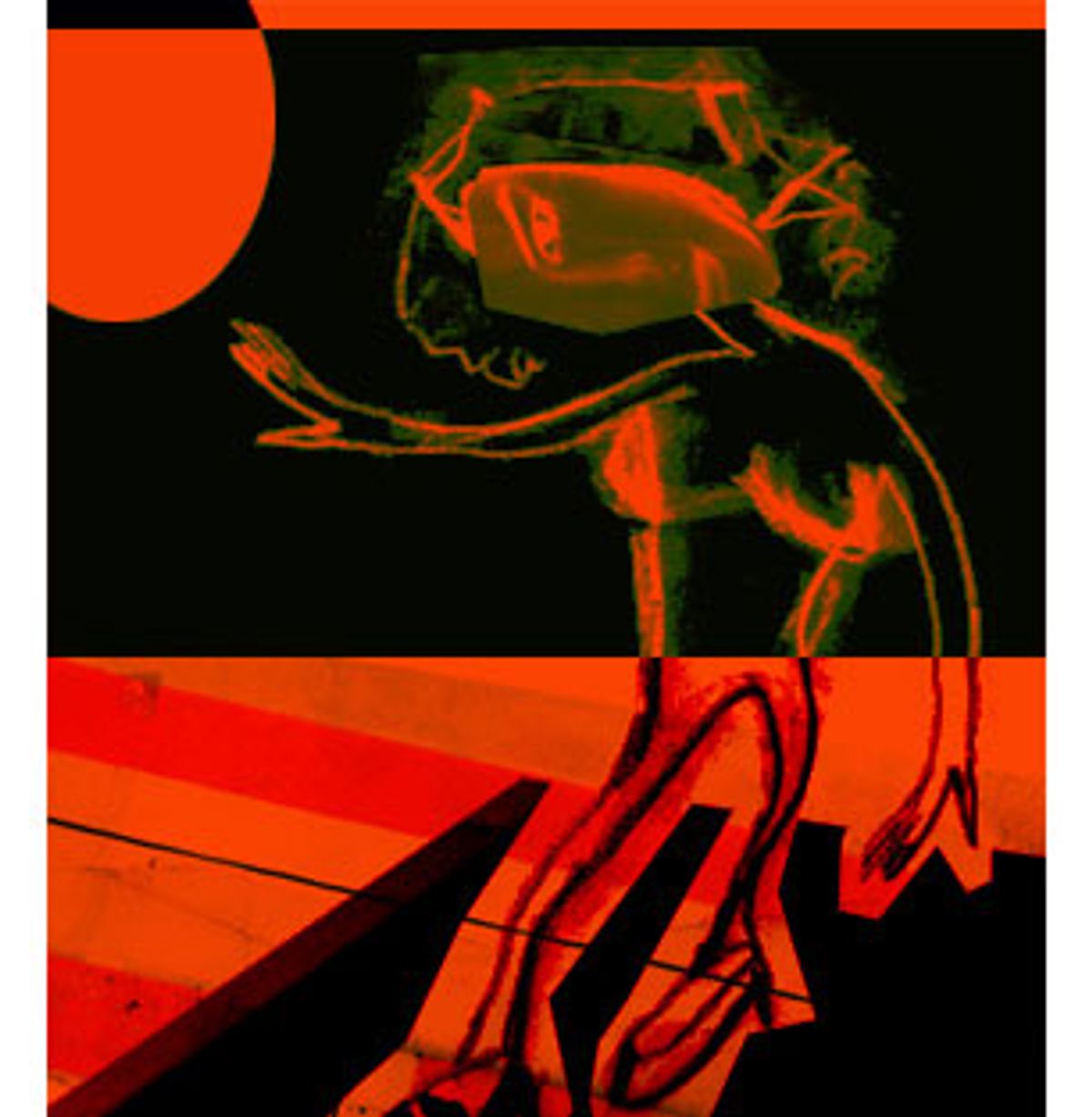 So I'm sitting in this Bangkok sex show, wondering why I don't want to throw up. A horrible rendition of "Born to Be Wild" plays on the stereo system in an air-conditioned bar called The Long Gun. I can't see past the paunchy, middle-aged white men encircling the center stage, but balloons hang from the ceiling of the bar, popping all around the rectangular platform. Pop pop pop poppop! Rapid-fire blow darts make quick work of the balloon bunches. Most of the sex bars I've been to in Bangkok feature a stage like this, with enough space for 10 or 12 dancing women at a time. But right now, at midnight on a Thursday at The Long Gun, there's only one woman on stage. She's on her back, shooting blow darts with her vagina.

She's a good aim. All the balloons are gone within minutes. I sit through a few more tweaked versions of American favorites -- "Happy Birthday," "Magic Carpet Ride" -- before some other women take their places on stage, also on their backs. Each one blows a whistle with her vagina. It occurs to me that their rhythmic bleats are supposed to resemble another American song. I don't recognize it this time.

There are dozens -- probably hundreds -- of pussy shows here in Thailand's notorious fleshy capital. The Soi Cowboy, Nana Plaza and Patpong areas cater to Westerners, and these shows are always a favorite. You can see a pussy smoking a cigarette or "drinking" a Coca-Cola if you want.

Lots of the sex bars lack the acrobatics found at The Long Gun. They're all selling bodies though. You just point to a number, pinned on a knee-high boot or string bikini, to do more than just watch. Everything's for sale here. You can buy a woman for the night, a man who looks like a woman -- a katoey boy -- or one of each. I even saw somebody buy a picture of Elvis off the wall behind a bar once. Or you can just buy someone a drink, sit back and enjoy the show. That's what I did.

At Nana Plaza, just off one of Bangkok's main thoroughfares, there's a sex show at 10:30 on Saturdays. I get there early enough to secure a seat close to the stage, and a heavy, red velour curtain swings open as Savage Garden croons -- in English, of course -- about love and other romantic notions. There's a glass pane separating us from the young women inside a mock shower scene. I order a Heineken -- Thai beer gives horrible hangovers -- and watch as they wash and rinse one another. I'm getting used to the insanity and chaos here, which I must admit scares me just a little. But I like watching instead of being watched. No one pays attention to me in here -- besides a sidelong snicker once in a while from some guy who could be my father -- and why should they? There's plenty to see onstage.

Before the sex show begins, a couple of women write with suds on the window "Pay Bar 500 Baht" in large, English letters. That's about $10, and it will get them out of the bar for the night -- an interested patron will then pay for a hotel room and negotiate a price with the woman separately. I watch as the pale faces contemplate (that's probably too grand a word) the young women onstage. A hotel will cost one of the men between $8 and $10, and payment for the woman's time can range anywhere from $10 to $100 or more, depending on what the couple decides.

Dancers in Bangkok make good money, especially from farangs, or white foreigners. Women can support entire families in poverty-stricken Bangkok, or in rural Thailand, where they're often from -- areas such as Udon Thani and Ubon Ratchathani in the country's poorest, northeastern Isaan area, where families live in one-room huts with dirt floors and no running water.

Prostitution is illegal in Thailand. But Thai officials have made a practice of telling themselves that if something is illegal, it doesn't exist, and they treat the sex industry the same way. Officials typically ignore brothels and sex clubs, and government bribery is common. Now and then a massage parlor gets busted, but not often.

The U.S. State Department offers American travelers a couple of benign warnings about the dangers of sexually transmitted diseases and AIDS in Thailand on its Web site, but there's more said about the malaria and bad water here. I'm not too worried about the State Department as I sit in Nana and watch a lesbian sex show behind the glass. It's everything I imagined it would be: mechanical, rehearsed and a bit uncomfortable-looking. I watch a woman extend an arm to help her 'partner' up off her knees and it's the most genuine gesture in the show. Do they really think we believe this stuff is real?

I decide some of us might when I meet Joe from Chicago. Bangkok sex bars are made for guys like Joe, who's probably in his early 40s, a strapping man who reminds me of a police officer or maybe a construction worker. As we fall into step together on Sukhumvit one rainy afternoon, each of us eager for an English conversation, he tells me he's only been in Bangkok for a couple of days, but he made it to Nana Plaza the night before.

"I'll tell you something about these Thai women," he offers with an air of superiority. "They're so easy, and they're nice. Now they know how to treat a man. I'll tell you something else," he says, nudging me with his elbow and leaning in. "American women could learn something from these Thai women. American women with their big hips and their big mouths -- they never know when to shut up."

Oh yeah, he tells me, he'll definitely be back to Bangkok. He says he's heard about places where you can screw two sisters at the same time. He loves it -- there is sheer craziness all around him, and beautiful women to boot. I pretend I'm Joe for a minute, and I wonder, what's not to love?

Soi Cowboy, Bangkok's original Western sex strip, was created to satisfy the "needs" of guys like Joe -- to give the influx of GIs on R & R leave from Vietnam in the 1960s someplace to party. Places like The Long Gun stay true to their non-Thai names and Western profits, because white skin means money -- always has -- in Thailand, even more so since 1997's economic crash. Almost any materialistic urge can be satisfied in the city, if you know where to look. A dinner for two with a bottle of wine is usually less than $20. A pair of pants from a department store costs about $5. On the street, clothes are a buck or two. But a meal on the street, where working-class Thais will get a quick dinner, costs about 30 cents. American money goes far in Thailand, and Thais have learned this over the years.

My lesson in Thai capitalism came one night at the Atomic Cafe, a bar with a good collection of 1950s kitsch memorabilia and American vinyl records. It was far from Patpong or Nana, and a good 15-minute cab ride from Soi Cowboy. I showed up alone -- "You no lonely?" a bartender named May asked me. Before I left the bar, May's co-worker said I could "enjoy her for the night" if I wanted. In the clubs, sex is a transaction, not an emotion. My dollars gave me power and freedom I'd never have in the U.S.

I never found out how much she cost, but I wondered. As a '90s woman -- liberated, I suppose -- should I have felt powerful? Triumphant that I could pay a woman to have sex with me? I tried to remember what I'd learned in my feminist theory classes. I was finally "equal" to a man on one sexual frontier -- I could act like Joe if I wanted and no one would know the difference.

But I didnt want to act like Joe, and whats more, didn't want to pay money to do it. Sure, our money gave us power, but it was an unfortunate juxtaposition: money, sex and a submissive interaction. I didn't feel powerful. I watched the women behind the bar at Atomic Cafe flirt -- shaking their long black hair, smiling, nodding eagerly -- and I knew how they felt. Halfway around the world, alone in the middle of this strange city, I felt oddly close to home.

Bangkok is called Krung Thep in Thai, which translates to City of Angels. Its sprawling layout is often compared to that of Los Angeles, but it's far from heavenly. Legendary traffic jams clog the narrow streets day and night; stray dogs lie beneath roadside food stalls where dishes are usually washed in gutter tubs. Bangkok reeks, worse even than Manhattan's meatpacking district in mid-July. Exhaust fumes, trash and what looks and smells like raw sewage in the canals combined to leave me gagging during my first few days in the city. The pollution and stench don't permeate the go-go bars though, where the air is well-circulated, cool and clean. Go-go bars are always air-conditioned, even though many Thais live without it in the swampy, year-round 90-degree weather.

In the sex clubs, it's hard for me to make eye contact with farangs. I can't blame them for not wanting a reminder of America -- I don't. When in Bangkok, who wants to think about high-speed commuter trains, ubiquitous advertisements and the monthly mortgage? Thai women are gorgeous, friendly, compliant and they treat us like royalty in the red-light district. But I'm still uncomfortable as I e-mail friends about what I've seen in Soi Cowboy and Patpong.

"It sounds so gross," one friend wrote. "Isn't it lonely for the guys who go there? I can't imagine."

Back at The Long Gun, I watch a balding man in his 50s with a girl on his lap and two next to him, all arms around him. One of his hands is on an ass and they all laugh loudly. They can't understand one another, but even if they could, I don't know what they'd say. But that's just it: you don't have to say anything, or explain anything. You just do in Bangkok, like the other Westerners there -- learn your basic cash exchange phrases and you're greeted with a big smile and an outstretched hand at the end of the night. Capitalist comforts are easy to come by, but I would certainly lose my soul if I stayed here. It's too easy to buy interactions here.

I leave not knowing whether the men in the sex clubs are lonely. I figure they probably are, but no lonelier than they would be at home. And I don't know why I never wanted to throw up. The go-go bars are happy, and so is Bangkok, generally; even in the midst of poverty and stench, an uncomfortable situation is covered easily by joking. There's a smile on the woman's face around here, she laughs at everyone's jokes and at The Long Gun, as I watch her on the balding man's lap, she doesn't even mind when his attention strays from her as the women take their places onstage.

Laura Cavender is a writer living in Washington, D.C.