Her time with us was short, but we will never forget the comely tan-and-white terrier. 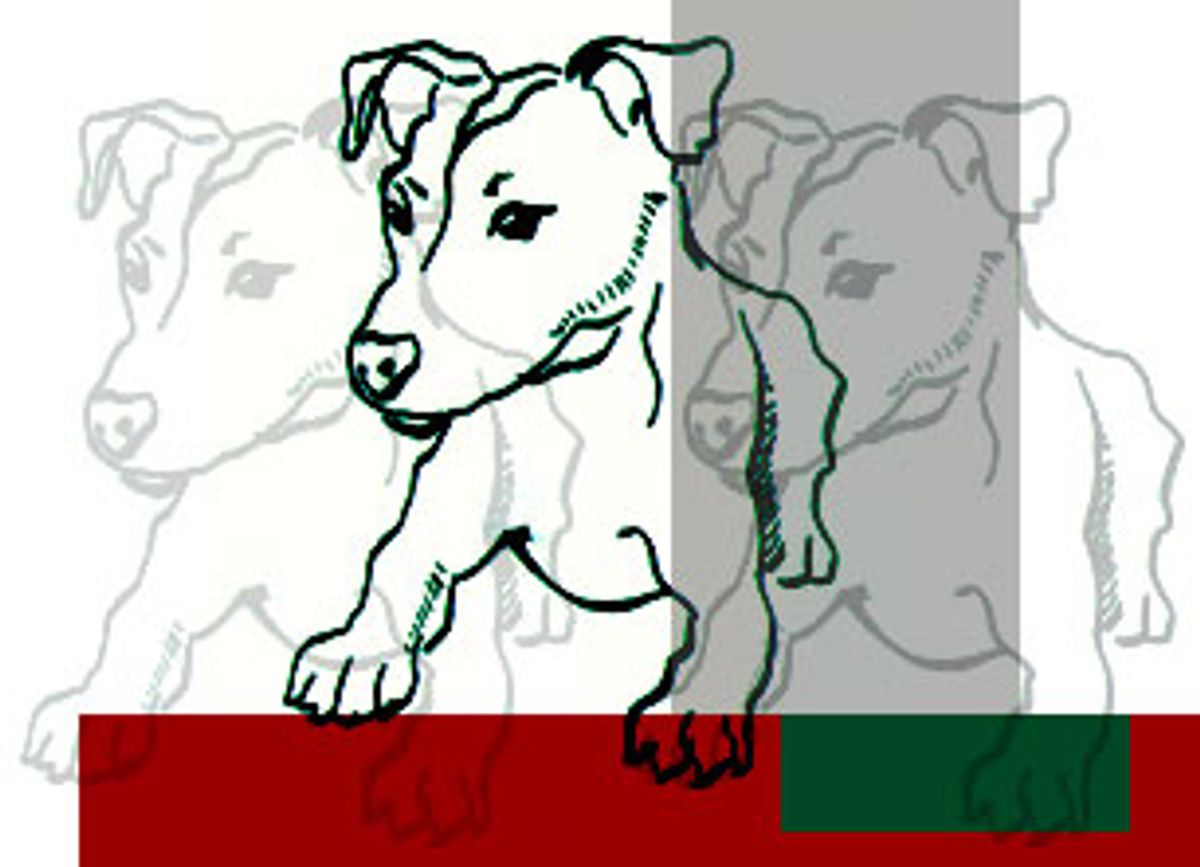 The package from a Rhode Island mail-order company was waiting for us inside the garage door when we returned home after our last Christmas vacation. We had received similar ones the two previous Christmases addressed to Jane Russell, care of our family, at our address in Amherst, Mass.

"Oh God," groaned my husband, Chris. "What do we do with it this year?"

The addressee was not the Jane Russell, but a comely tan-and-white Jack Russell terrier we had rescued two years earlier from a pathologically negligent owner I'll call Lulu. Born of championship stock, Jane had been won by Lulu as a raffle prize at a Virginia steeplechase.

While Lulu enjoyed the hunt-country cachet that Jane bestowed on her, she was less enthusiastic about the quotidian duties of dog ownership. She left Jane for days, even weeks, at a time with a bin of dry dog food and newspapers on the floor.

For 10 years, Jane begged care off a kind-hearted neighbor -- a close friend of our family's -- who finally succeeded in persuading Lulu to let us adopt Jane. Now Lulu was sending presents, acting the part of doting mom instead of Mommy Dearest.

Chris and I had accepted the offer of Jane immediately. She seemed like the perfect "starter dog" for our young sons, Tommy and Nicholas. Our only reservation was that Jane was already an old lady. We knew she would soon be beset by flatulence, incontinence and tooth decay. But who were we to deny a sweet old dog a few happy twilight years? Within the week, she was ours.

Docile yet determined, Jane immediately set about arranging her new life. Six hours of inconsolable crying the first night was all it took to get her bed moved from the back porch to the master bedroom. The next night, a long, soulful look gained her a cozy spot under the covers with Tommy. Ever fearful of abandonment, she kept me in her sight at all times, even when I went to the bathroom (as if I might climb out the window and never return).

Jane won the affection of everyone she met. Even our friend Peter, a reserved and dog-averse college professor who did his best to resist her imperious demands, eventually succumbed to her charms.

Jane worked particular magic with 7-year-old Tommy. For him, hugs and kisses had always been torture, but his nightly snuggles with Jane brought out his softer side. He invented a dog-voice for Jane, and through him she weighed in on a variety of subjects, including her favorite places to pee and which team she picked to win the Super Bowl. On the rare occasions when we traveled without her, we had daily communications with her via Tommy's "Jane-o-phone."

Nicholas, at age 4, greeted Jane with the ambivalence of an older sibling welcoming a new baby into the family. He was loath to yield his position as the smallest and cutest member of the family. But unlike a helpless newborn, Jane was quick to let him know that a stranglehold was not an acceptable gesture of affection. It wasn't long before she became a dowager aunt to him rather than a baby sister.

Last spring, less than two years after her arrival, we began to see signs that Jane was slowing down. She no longer chased squirrels or jumped into the car as if propelled by springs. By August, she could no longer even manage the two steps into our house. She tested positive for a bizarre array of diseases, including Rocky Mountain spotted tick fever, but failed to respond to any medication.

One afternoon I found her lying quietly under the bushes by the garage, as if she were preparing to meet her maker. I knew it was time for desperate measures, and off we sped to the Tufts Veterinary Hospital, over an hour away. I was crying so hard I could barely make out the road, or the map I had propped against Jane's rump.

The Tufts veterinarian, a sympathetic and gentle young woman, immediately scheduled Jane for an MRI, available only at the UMass Medical Center in Worcester. Human demand for the MRI equipment is so great that vets are allowed only a couple of slots per week, during off-off-peak hours. I imagined the conveyor belt moving continuously through the night: Human, human, Jack Russell terrier, human, human, hamster.

By the time the vet called with the test results, I had convinced myself that Jane was going to pull through. "Jane went through the anesthesia and the MRI just fine," she assured me. My shoulders collapsed with relief. "But I'm afraid the MRI results aren't good."

I shut my eyes and started seeing glaring red swirls. The test showed that a cancerous tumor had worked its way into Jane's spine and had spread to her rib cage. Communicating in a code of choked sobs and mms, I agreed that to attempt treatment would only cause Jane more suffering, and that Chris and I would come that afternoon to be with her when she was put to sleep.

The boys were devastated by the news, Tommy especially. We all cried and tried valiantly to remind each other of the happiness Jane had brought us. We knew she was now in a better place, out of misery. I told the kids -- and myself -- that it was OK to be really, really sad, and that in time the pain would diminish.

Within a week, we began receiving bulletins via the Jane-o-phone from Dog Heaven. Jane told us that she slept on clouds, ate chocolate cake every day and was getting acquainted with all the dogs I'd grown up with who had passed on long before. I found these communications oddly comforting. They not only reflected how well Tommy was coping with his grief; they also made me feel as if Jane weren't really dead.

We soon adopted a dog from the animal shelter, a black-and-white spaniel mix named Henry. He is an unmade bed of a dog, as floppy and disorganized as Jane was tidy and fastidious. Despite Henry's lively presence, in the months following Jane's death I still cried whenever I thought of her. I couldn't believe I'd never again stroke her velvety brown ears or smell the buttered-toast aroma of her tiny terrier feet.

When I found the Christmas package addressed to Jane Russell, I went into a tailspin. I was still not ready to face the fact of her death. Chris scrawled "RETURN TO SENDER" on the box, and I took it to Mail Boxes Etc. to arrange for its return to the mail-order company.

Waiting in line with the other people transacting their post-holiday business, I wondered how best to explain my predicament to the clerk. When my turn came I just started talking.

"You see, this woman who used to own our dog sent her a Christmas present."

"Actually, it isn't nice at all," I snapped. "She was a horrible woman who neglected the dog all her life."

By this time, other people in the store were curious to hear more. "Well, she must have really wanted to get the present here before Christmas, because she sent it special overnight," said the clerk. "That must have set her back about 25 bucks."

"So, why don't you just give the dog the present?" asked the woman behind me. I started laughing. "Because she's dead!" I exclaimed. A chorus of mms and oohs rose around me. Suddenly it hit me: Jane is gone and I can laugh about it.

"Wow, I've never heard of anything like that before," said the clerk.

"Maybe you should tell the lady the dog keeled over at the mention of her name," suggested a young woman at the next counter.

When I learned how much it would cost to return the package -- surely more than the value of the contents -- I decided to keep it after all. I apologized for wasting the clerk's time and he just smiled and said, "Hey, no problem."

I told the boys about the package when I picked them up at school that afternoon. We decided that Lulu would want Henry to have the gift. She certainly would have no use for it, and she'd sent it for a dog to enjoy.

The kids tore open the box as soon as we got home, revealing a basket of gaudy Christmas dog biscuits -- green rosettes with red sparkles, striped candy canes, gingerbread pups. Jane would have turned up her delicate black nose at these vulgarities, but Henry -- no food snob, he -- gobbled them up as rewards for his sporadic outbreaks of good behavior.

Another Christmas is just days away, and I still haven't told Lulu that Jane is no longer with us. If our friends back in Virginia haven't told her yet, maybe I'll just let it go.

Henry, for one, doesn't think there's any hurry.

Mickey Rathbun is a freelance writer in Amherst. She writes regularly for Sports Illustrated for Kids, and Sports Parents