Where can you order an indoor/outdoor miniature golf course for only $18,999.95? In the mother ship of all catalogs. 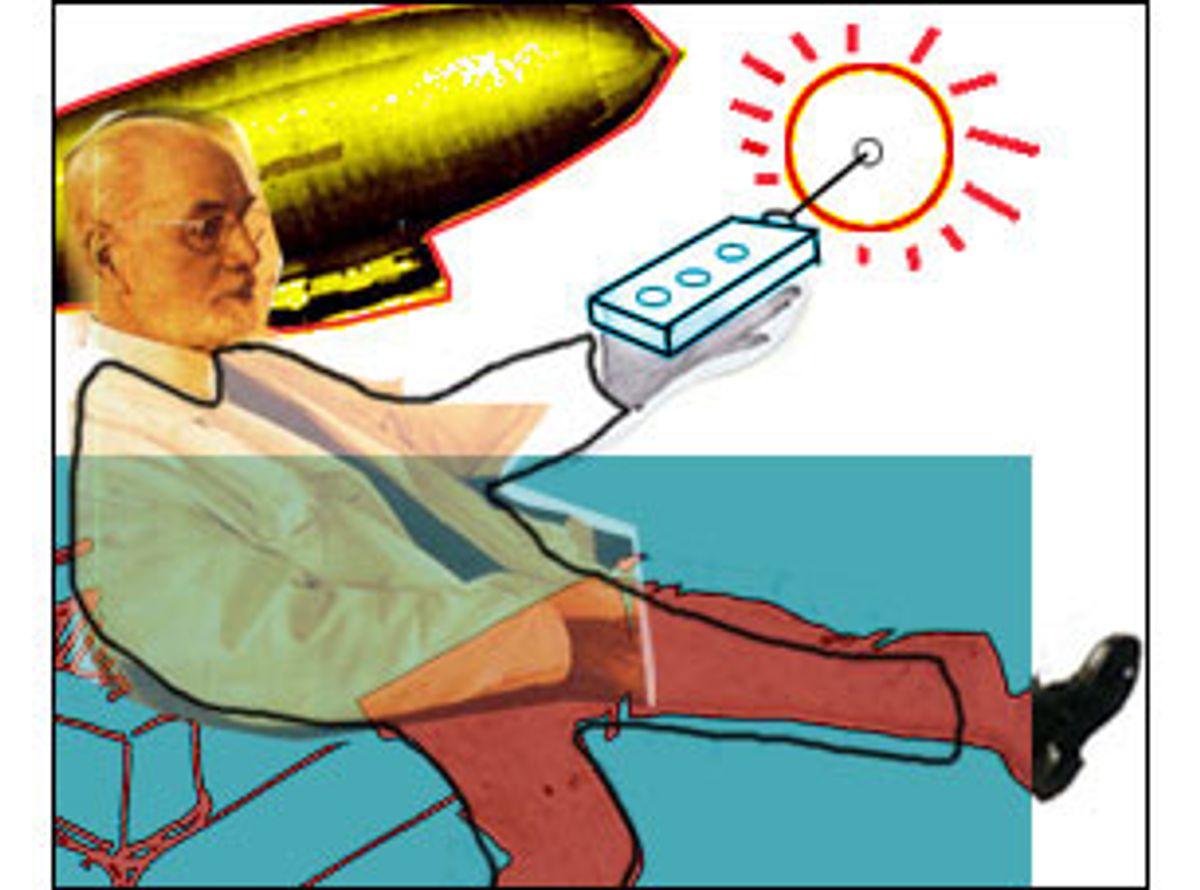 It's like one of those whacked-out '60s psychology experiments, where
researchers who have burnt through all their LSD funding force scared baby
monkeys to suckle from wire mothers. But these ain't monkeys, baby, they're human beings, and they've been hermetically sealed into a metal container that tilts upward and downward, shakes violently without warning and makes very loud roaring noises. They've been locked in with hundreds of other humans; they don't know each other, they smell funny and they're
literally strapped into the seating pattern of the wedding from hell.

The
talkers are next to the misanthropes, the kids are next to the people with
mononucleosis, and the vegetarians are sharing an armrest with the Sausage
King from DeKalb. They have been deprived of all normal stimulation, and they are all aware that their metal box is 30,000 feet up, and nothing is
actually holding it there.

And what treasures does it promise? For the simple holiday traveler, this
season's catalog offers Solar Tan Thru Suits (made with a "Super Soft Micro Fiber Tan Thru Fabric"). For the practical-minded business traveler, there are Learn Foreign Language tapes ("Muy Pronto!"), and the Verbal Advantage program, which will let you "amass a Harvard graduate's vocabulary in just 15 minutes a day!"; and there are the business slacker's Cliff Notes, Executive Book Summaries, so you can "blitz through the year's best business books."

And then, for the rich fat cats with no sense of purpose or humor, four ex-wives and a haunting, dread-filled sense that somewhere along the way they took the wrong path, the selection is a little wider:

Are you an executive who lies awake at night counting
the days till you take Chapter 11? Take your mind off your worries with a
remote-controlled, helium-filled indoor flying blimp. The "4-foot long
metalized balloon inflates and deflates for unlimited flights." A remote
control "regulates lift, drag and propeller thrust," and the balloon soars
up to 200 feet high, so that even as you lie there drowning in your
miserable life, your spirit can soar. Helium refill tank sold separately.

Are you an attractive CEO locked into a loveless marriage, unable to divorce your wife because of that damn Wendt woman? Regain your youth and impress your secretary by inserting tiny surgical steel blades whirling faster than 4,000 rpm up your nose: Try the Turbo-Groomer. "Trimming nose and ear hair has never been easier."

Perhaps you feel a delicious sense of scorn whenever you board the plane
ahead of the donkeys in economy class. Rub it in by buying an indoor/outdoor miniature golf course for only $18,999.95 -- you could buy and sell their families for that price!

Quirky, arcane and bizarre though it may be, SkyMall is a hugely successful
business. Catering particularly to its niche market of business
travelers, it not only promotes products like Hummers, it sells them. The
company was founded in 1989, and it contracts with merchants, often
purveyors of fine catalogs themselves, to feature their products in its
in-flight catalog, and more recently, at its online site.

SkyMall pays 16
domestic airlines a flat fee to place the catalog in their seat pockets, and
it dominates the in-flight market in the United States, reaching potentially 420 million customers a year. Customers order from the in-flight catalog by calling the toll-free number or by checking in at the Web site after they
disembark. A recent innovation means they can also dial for free from
the seat-back phones onboard the plane ("Rush me the self-contained,
free-standing Outdoor Wok, I must have it!").

SkyMall is the catalog of catalogs, which means that its unique products are
accompanied by copy of the most rarefied nature. Clearly, catalog
advertisers are not shy about promising a conversion experience, nor is the
American buying public going to let itself be put off by a little cheese
with their ad -- but who reads about the mailbox that is "built to the
standards of today's fine homes" and thinks to herself, "Well, if it's
that good "? There must be something about the enclosed environment or the lack of oxygen that makes proclamations like "the corkscrew revolution of '96" somehow more palatable.

For the non-buyers (i.e. the donkeys in economy), the catalog is a book of joke cues, endearing itself to passengers by providing them with a multitude
of prompts. Has anyone read the "Harvard Grad's Vocabulary in 15 minutes a day?" ad and not immediately tugged on the sleeve of their traveling companion to say something along the lines of, "Harvard Grad's Vocabulary! The only Harvard grad I know couldn't spell vocabulary if you hit him over the head with it!"

I cannot believe that anyone reads, "Invariably, it's your finest vintages that are ruined by bits of crumbling cork," and then nods, "So it is, so it is."
Catalog copy writers are far sneakier than that. I think people like
myself (i.e. normal people) read it and respond, "My finest vintages! Ha ha ha. Oh, that's funny. My word, vintage'! That is so rich. I do quite
like a nice drop of wine, though. Sigh."

SkyMall is expanding at an exponential rate. In addition to the quarterly
in-flight catalog, it also has catalogs in airport lounges and on Amtrak,
and it is testing new forms of distribution in hotels and in alliances with
credit card companies. Online, it currently features more than 9,000 products -- up from 3,000 offered this summer.

SkyMall's online initiative was boosted with an initial investment of $27 million, over a third of the company's general revenue for the last fiscal year, which was approximately $66.7 million -- a lot of money just for taking a cut off sales from merchants like Hammacher Schlemmer,
Frontgate, and L.L. Bean. Why would such merchants -- many of whom have their own Web sites -- sell their products through SkyMall at a reduced profit for themselves? Because it works. Louise Kossler at SkyMall says that this is because of convenience; online -- not to mention onboard -- customers prefer "one-stop shopping."

Currently, most of SkyMall's customers are U.S. residents, but the company is also testing a European catalog on British Airways. This catalog is
printed in three different languages ("La vocabulaire d'un diplome
d'Harvard! Le seul diplome d'Harvard de ma connaissance ...") and uses the euro as the unit of currency.

I remember once being so tired at the end of a flight to the United States from Australia that I wept when Michael Jordan and the Looney Toons characters triumphed over basketball-playing demons in "Space Jam." Big, fat tears ran down my face, and I didn't care who saw them; my entire personality was undone after only three-quarters of a trans-Pacific flight. Writing this now on firm ground, looking out at the trees and the sparrows above me, I find it very easy to laugh. But who knows? Once those pesky nose hairs start multiplying and the turbulence gets a little rough, I too may be reaching for that seat-back phone to order a Turbo-Groomer of my own.