The love that dare not squeak its name

Even as a child I suspected I had something special in common with Stuart Little. 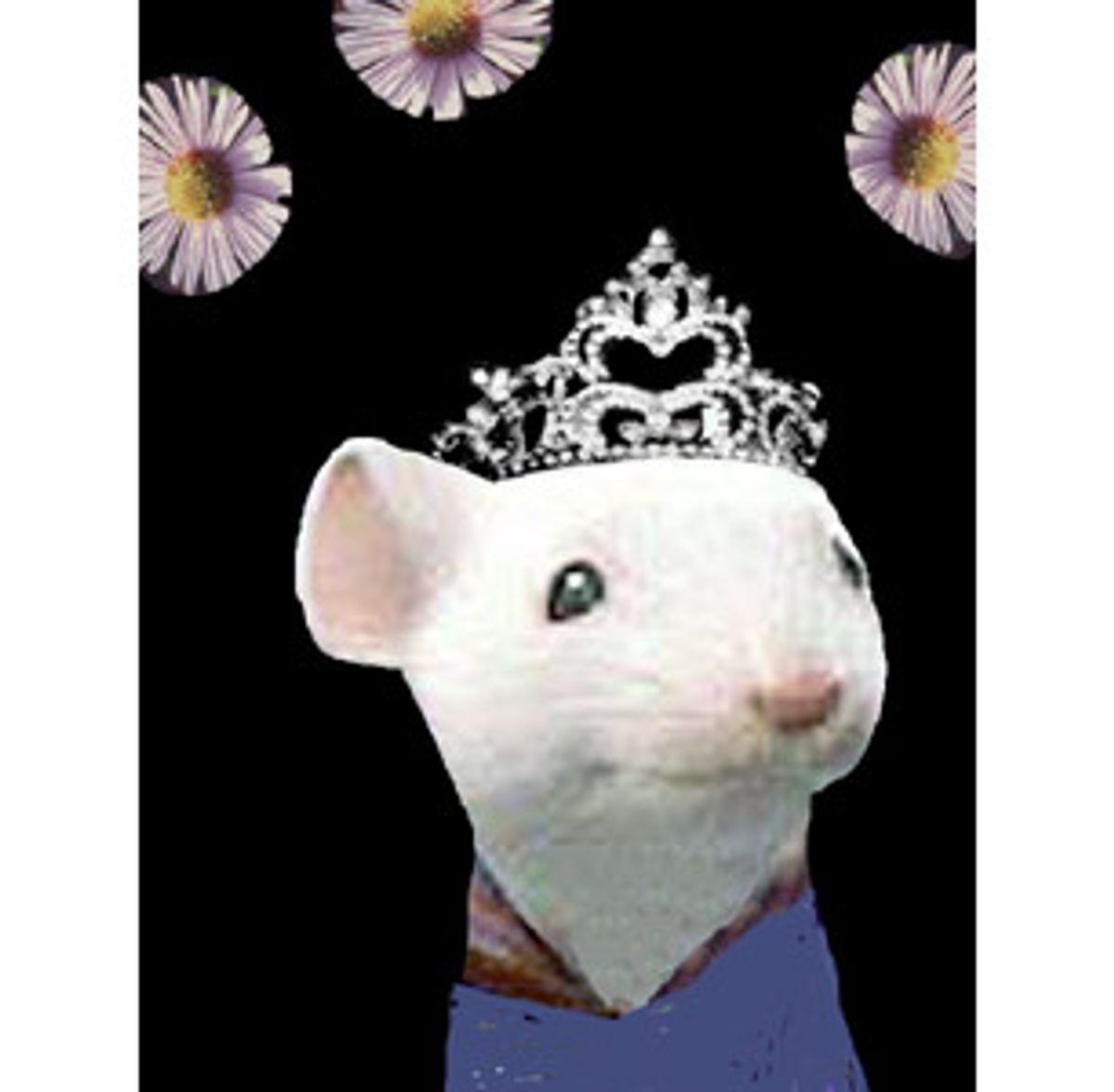 Had E.B. White written his children's classic "Stuart Little" today, he would have a hard time portraying Stuart, the second child of Mrs. Frederick C. Little of New York City -- a child who was "not much bigger than a mouse" and who also "looked very much like a mouse in every way" -- as anything other than some freakish monster. That's precisely why the current film adaptation shows Stuart being adopted, rather than being born. In this post-"Alien" age, examining too closely how a boy like Stuart might be made by human parents immediately brings to mind images of a tiny, hairless rodent slithering horribly from his mother's loins with a viscous plop.

But White wrote "Stuart Little" in 1945, when the biological process was shrouded in anaesthetized mystery. For those who were neither obstetricians nor women, childbirth must have seemed little more than checking into the hospital and, after three weeks of bed rest, emerging with offspring.

And Stuart is certainly no monster in White's vision. He is very much the Littles' flesh and blood -- ultimately a human child, albeit one with "the pleasant shy manner of a mouse." But, phenotype will out, and we are told that "before he was many days old he was not only looking like a mouse but acting like one, too -- wearing a gray hat and carrying a small cane."

At age 7, having the book read to me in second grade by the sainted Mrs. Brailey, it was this initial confluence of traits -- Stuart's unquestioned membership in a family despite one glaring material difference from them and his tinyness only accentuating his courtly manners and dandy tendencies -- that made me realize that I was somewhat like Stuart and that Stuart seemed, somewhat like myself, pretty gay.

This is not to say that Stuart Little necessarily sought the embraces of other boy mice. But had White, even in 1945, placed Stuart in his worsted blue suit with patch pockets anywhere near a schoolyard (there is an episode where he actually teaches school, but more on that later), Stuart would have learned conclusively from his human peers that he was, at the very least, a big fag, a sissy, a 'mo and a poof.

Nor do I mean to claim the fine feeling and higher sentiment embodied by Stuart's rarefaction as the exclusive province of the gays. Heaven knows that we inverts contain within our ranks many who have no manners to speak of, either shy or pleasant. And certainly a gray felt hat and cane are not necessarily gay props.

But props in and of themselves are an integral part of a gay childhood, with its vigilance against exposure, its years of passing. As a gay child, your life essentially consists of writing checks your ass can't cover. The two remedies to this problem are either stepping back and remaining more an observer than a full-on, good faith participant, or going in for more performative behavior (during more judgmental times, we used to call this second option "living a lie") until such time as one can move to New York.

Stuart's very mouse-ness -- indeed, at just over 2 inches tall, his intrinsic lack when push comes to shove -- means that he must rely on props and costume throughout the book, if only to face the exigencies of negotiating a human-sized (and human-faced) world. His use of visual aids hardly makes him a closet-mouse. Quite the contrary.

As part of Stuart's quest for human straight-boy realness, White unwittingly has him repeatedly embodying gay stereotypes. And Stuart does so with the exactitude and heightened attention to detail of the drag artist, right down to the cinematic lexicon of each new scenario. Stuart has the patois down pat.

Donning his sailor suit one fine morning, Stuart sets out for Central Park. Boarding the Fifth Avenue bus, he tries to pay with one of the small tin foil coins made for him by his father. The conductor is understandably patronizing.

"Well, I'd have a fine time explaining that to the bus company. Why, you're no bigger than a dime yourself."

"You'll have to forgive me, for I had no idea that in all the world there was such a small sailor."

"Live and learn," muttered Stuart tartly, putting his change purse back in his pocket.

A thoroughly modern Stuart might just as easily have appended a withering "Mary" to the end of that riposte.

He butches it up considerably by the time he reaches the boat pond, where he asks the owner of a toy sloop, the Wasp (what a fitting name for the vessel on which to earn some measure of societal acceptability) to sign him on for a position as a crewman on deck.

"Are you sober?"' asked the owner of the Wasp.

Like that first highly encoded meeting of Glenn Ford and George Macready in "Gilda," or Paul Cadmus' paintings of shore leave, there's an almost pornographic quality to this waterside transaction; the young matelote brusque cataloging of his physical prowess to the older gentleman. Even the clipped manner of the exchange, the grudging half-disclosure, has something of the Genet rough trade encounter about it: Stuart of Brest.

White does give Stuart a love interest. A small, wren-like bird named Margalo who stops briefly in the Little household. And Stuart's devotion is ardent to be sure, but not precisely romantic. It is closer in nature to Janet Reno's self-admitted "abiding fondness for men": somewhat theoretical and confusing. I'm not advocating that Stuart prove himself by engaging in a little hetero-normative trans-species loving; it is, after all, still a children's book. But even within that chaste context, Stuart is only playing at lover, as he plays at everything.

He is unable to resist stepping back in commentary, even as he is saving Margalo from the jaws of Snowbell, the Littles' cat. He grooves on the theatrics of the situation, casting himself in the Sidney Carton role: "'This is the finest thing I have ever done,' thought Stuart." But feelings of devotion and protective nobility are not love. Almost every gay boy I know had that awkward adolescent moment when he made his very close female friend doubt her own desirability because he displayed no interest in jumping her bones, even as he himself was thinking, "Well, lip-synching into hairbrushes to the Supremes in her bedroom ... this is really romantic ... right?"

Margalo eventually flies from the Little home, possibly tired of waiting around fruitlessly for a little action (the official White version being that the feline peril in the house has become too great). Stuart takes to the open road, ostensibly to find her and make her his own, although he doesn't entirely commit to the he(te)roism of that romantic quest, either. "While I'm about it, I might as well seek my fortune, too," he muses. It's a little bit like resignedly hoping that there might be some cute guys at your engagement party.

It is during these travels that Stuart volunteers to substitute teach at the one-room schoolhouse in a small town. It is perhaps his finest drag performance. As proof of his qualifications for the job, Stuart disappears into the bushes and emerges in striped trousers, a tweed jacket with waistcoat, and a pince-nez. There would be no epithets hurled by the schoolyard boys at his current incarnation.

Stuart has transformed himself into a forbidding yet ultimately kind, highly cultivated pedagogue. The children are rapt by his cunning size, his stern air of authority and his common touch in talking to them on their own level about deep ethical questions. The subject turns to stealing and he has one of the boys steal a small sachet pillow from one of the girls. When the discussion is over, Stuart turns his attention to the pillow, which attracts him; it might make a lovely, fragrant bed.

"That's a very pretty thing," said Stuart, trying to hide his eagerness. "You don't want to sell it, do you?"

"I suppose it was given you by some boy you met at Lake Hopatcong last summer and it reminds you of him," he said to her, dreamily.

"Yes, it was," said Katherine, blushing.

Everything but breaking out into a rendition of "September Song" by Kurt Weill. Who is this old queen, suffused with nostalgic yearning? Stuart is still only about 7 and a half years old at this point, but here he is, suddenly transformed into Mann's Aschenbach, an aging roui, his summers of love and beauty all far behind him now, watching the epiceine young Tadzio on the Venice Lido as the plague creeps in.

White gives Stuart one last crack at romance. As he passes through yet another town, a shopkeeper tells Stuart there is someone he should meet -- a human girl just his size. Like Edward Everett Horton the ur-Confirmed Bachelor, Stuart doesn't even feign interest anymore. "What's she like ... Fair, fat, and forty?" he cracks.

But he does agree to meet the tiny Miss Harriet Ames. He purchases a small birch bark canoe, he prepares a picnic. He runs over and over again the details of their assignation, how they will paddle to a lily pad, what swim trunks he will wear, etc. At almost no point in his fantasy does Harriet make much of an appearance. When their date finally arrives and some large, rude boys have laid waste to his toy canoe, he is disconsolate and cannot continue with the charade. Design Queen Stuart has taken control.

Harriet suggests they try to have a nice time just the same. "We could pretend we're fishing." she gamely suggests. "'I don't want to pretend I'm fishing,' cried Stuart, desperately. 'Besides, look at that mud! Look at it!' He was screaming now." The aesthetics of the date -- the true locus of his fixation -- have been ruined, the amorous simulacrum has been destroyed. I don't speak with anything resembling personal experience, but surely a damaged canoe should not be enough to ruin a lovely summer night by a river with a willing young woman by one's side. If anything, it sounds like the aquatic equivalent of that old saw, "Looks like we're out of gas (heh heh)."

Stuart once more lights out for the territories, again putatively to find Margalo. Even White understands by now that this is probably not a phase. Certain things might just not be in the tiny cards for some. And it was Stuart who taught me, in no small part, that this would be fine, too. Sitting on that classroom floor, legs crossed, I realized that I, like Stuart, might one day hope to walk down a big city street, a little mouse among many, "full of the joy of life and the fear of dogs."