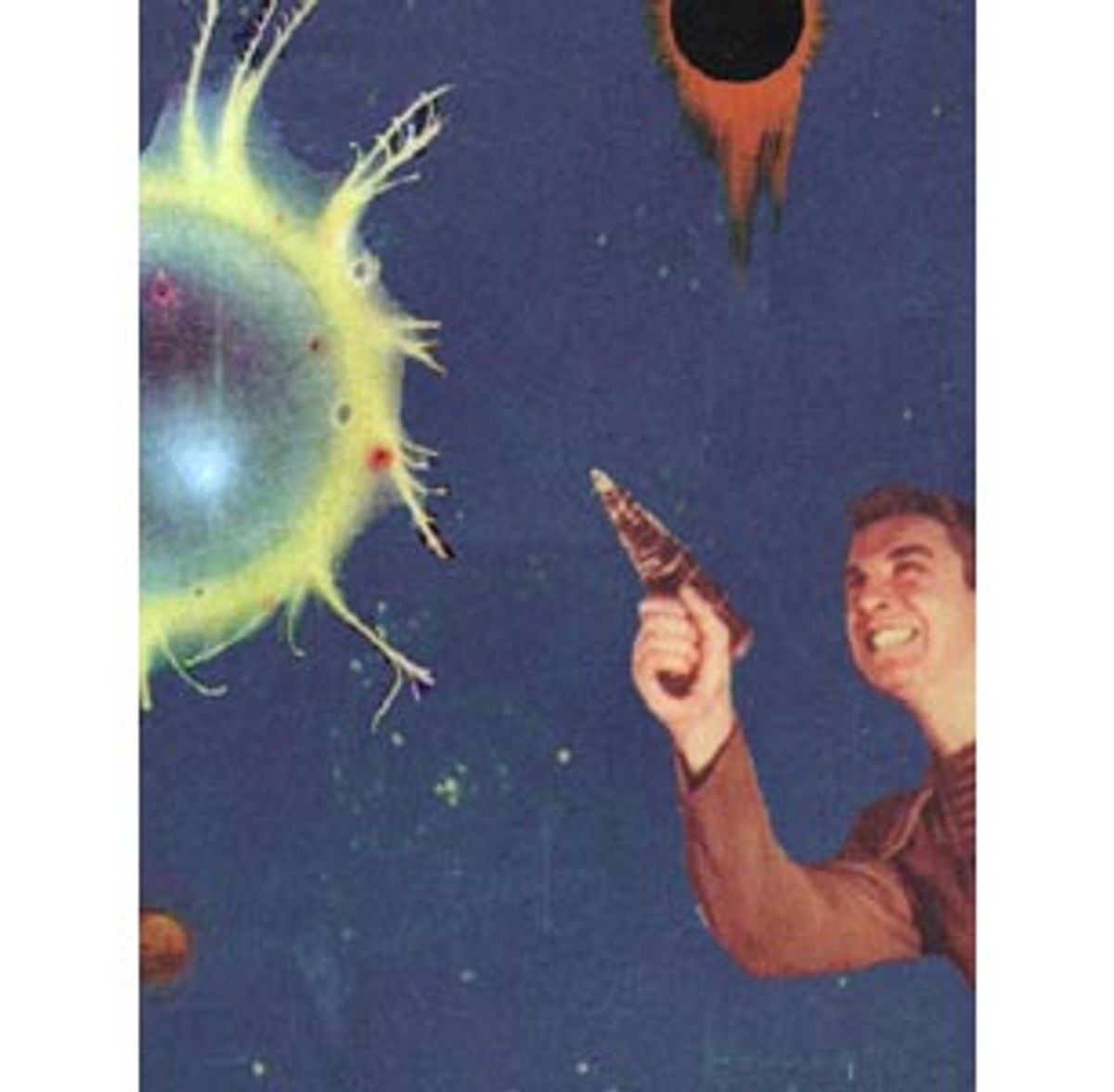 Connie Willis, curmudgeon, book addict and philosopher, writes with a devil on one shoulder and an angel on the other. Like her literary ancestor G.K. Chesterton, another philosopher wit, she's fascinated with paradoxes of good and evil. Her twin advisors have various names: chaos and order, the past and the present, comedy and tragedy. But which is the angel and which the devil? In her world, the forces of dissolution may well turn out to be agents of a benign fate.

Take Flip, the pierced, tattooed mailroom clerk at HiTek, a corporate think tank, where Willis' 1996 novel "Bellwether" takes place. Grudging and aggressively incompetent, she tosses a monkey wrench into the research of every scientist in the company. At least, that's how it seems to Sandra Foster, the narrator. Sandra, a sociologist, is trying to discover how fads start (in particular, hair-bobbing in the 1920s). Flip foils her at every turn, trashing her carefully arranged clippings or mis-delivering important packages. Yet if not for Flip, Sandra might never have met chaos researcher Bennett O'Reilly, and the two might never have started on their singularly fertile collaboration.

In a sly bit of satire, Willis pokes fun at her own themes. Sandra collects bestsellers, looking for new fads. Here she comments on one book called "Led on by Fate":

Its premise was that everything was ordained and organized by guardian angels, and the heroine was given to saying things like "Everything happens for a reason, Derek! You broke off our engagement and slept with Edwina and were implicated in her death, and I turned to Paolo for comfort and went to Nepal with him so that we'd learn the meaning of suffering and despair, without which true love is meaningless. All of it -- the train wreck, Lilith's suicide, Halvard's drug addiction, the stock market crash -- it was all so we could be together. Oh, Derek, there's a reason behind everything!"

Whether through inadvertence or preordination, Flip leads Sandra and Bennett to a breakthrough about the self-organization of chaotic systems (such as women's hairstyles). Actual chaos theorists may roll their eyes, but the insight has the delightful neatness of a mystery plot sprung by a master.

Willis creates a miniature version of "Bellwether" in her new book, "Miracle and Other Christmas Stories." For the most part, these are a little too heart-warming, as good Christmas stories should be. Like "Bellwether," the title story takes place in a stuffy corporation. Willis delights in poking fun at bureaucracies. The Flip figure, however -- a familiar Christmas character disguised as a young man in a Save the Whales T-shirt -- is not surly, but aggressively helpful. He's going to give the heroine her heart's desire, whether she likes it or not. Readers know long before she does just what that desire is -- the sweet but nerdy Bennett figure, of course.

Willis fans should not be surprised to find her writing Christmas stories. The church figures broadly in her wonderful novel "Doomsday Book" (1992) and its even better sort-of-sequel, "To Say Nothing of the Dog" (1998). As in "Bellwether," Willis uses both the science and the fiction components of these sci-fi novels to explore questions of fate and free will.

In the books' 21st century world, researchers at Oxford have figured out how to travel to the past. Time travel notoriously unleashes a legion of conundrums: What if I went back and killed my own grandfather, yadda yadda yadda. Willis crams the worms back in their can by inventing a law of physics: The time-travel system, called the Net, won't let through anyone or anything that would change the world order, the Continuum. Willis finds this law congenial in many ways. Conveniently for her favorite theme, it lets her probe the ways individuals can and can't affect the world they live in. Conveniently for her plots, it lets her keep the greedy corporations away from the Net -- they lose interest once they learn they can't use it to plunder the past or manipulate the stock market -- and this allows her to choose librarians and historians as her swashbuckling heroes. This is truly science fiction for humanities majors.

In "Doomsday Book," Willis explores fate and tragedy by sending Kivrin, a historian, back to the Middle Ages, just when the black plague arrives. The bad timing, naturally, is the fault of bureaucratic incompetence. Kivrin's mentor, Professor Dunworthy, tries frantically to retrieve her, but Oxford is in the throes of its own plague. A mysterious virus has triggered a quarantine and its concomitant chaos. Meanwhile, back in the past, Kivrin befriends a noble family and their local priest, then watches her new friends sicken one by one. Will the Net let her save anyone who would otherwise have died? We suspect not. And yet, as the priest makes clear to her at the book's end, her presence does have at least a local effect. For one thing, she strengthens his faith in God -- even as she's losing hers. Who wins, God or death? Willis leaves the answer to the question blessedly ambiguous.

In "To Say Nothing," Willis leaves behind tragedy for what she does best: philosophical farce. It's several decades later and a wealthy battle-ax, Lady Schrapnell, has promised to fund time-travel research in return for help with her pet project -- restoring Coventry Cathedral to the state it was in before its destruction in World War II. In particular, she's eager to find the bishop's bird stump, a vase-like object that vanished in the bombing. In a diary entry, her many-times-great-grandmother mentioned this singularly hideous piece of Victoriana as somehow pivotal in changing her life. So the historians at the university have dropped everything to hunt for it.

Willis draws inspiration from P.G. Wodehouse, Oscar Wilde and Jerome K. Jerome, the brilliant Victorian humorist whose masterpiece, "Three Men and a Boat (to Say Nothing of the Dog)," supplied her title. The story bristles with subplots; it teems with stolen cats, butlers in disguise, fatefully missed meetings, seances run by charlatans and romantic high jinks. In their scramble to keep Lady Schrapnell happy, the historians worry that they've disrupted the Continuum, thus destroying the world as we know it. Naturally, however, the Continuum can take care of itself. It does so using the devices of romantic comedy -- creating outrageous coincidences, making passionate couples out of the most unlikely pairs.

Willis is better at imagining the past than the future. The dons in "Doomsday," for example, spend many frustrating hours waiting for long-distance calls, or missing them. Surely by the late 21st century even Oxford will have heard of cell phones and answering machines. But her 14th century and Victorian milieus have the ring of meticulous research deftly handled. The characters even speak in appropriately old-fashioned language without sounding stilted. And the cleverly tidy plots tie up the scientific loose ends with a thoroughness that would delight librarian and mathematician alike.