I was a closet thumb sucker until I was 11

I want my daughters to suck without fear. 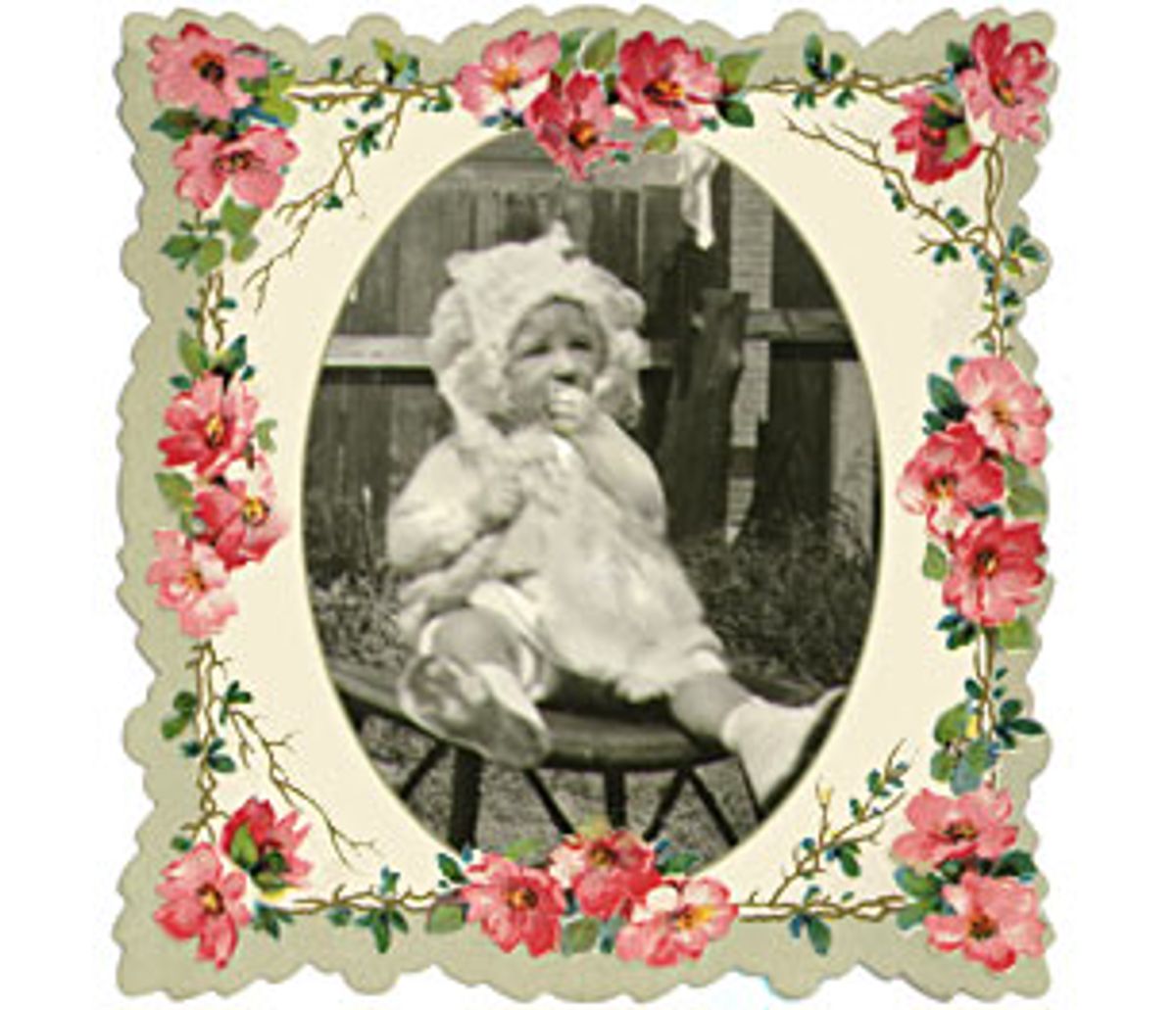 My 5-year-old daughter looks tiny in the beige vinyl chair, her eyes fixed on the dentist towering over her. She wears an expression only a mother can interpret: On the surface, she's compliant and eager to please. Underneath, she ripples with defiance, her unspoken warning: "No way in hell, bub, will I listen to you."

The dentist is telling her to stop sucking her thumb. "You're a big girl now. Big girls don't need to do that," he insists, and launches into a litany of horrors that have befallen or will befall her -- from calloused skin to buck teeth to being teased -- if she doesn't end this wretched habit now.

I clutch the edges of the counter behind me. This man is threatening my daughter, and I am swimming so far out in bad memories that I cannot catch my breath long enough to protect her.

I sucked my thumb until I was 11. I sucked with passion, with devotion, and I adored every succulent moment. I sucked while watching television, while riding in the car, while lying under the covers at night, the forefinger and thumb of my other hand plucking soft tufts of flannel from my pajamas and rubbing them against my upper lip.

I needed to suck my thumb. Sucking soothed me, calmed me, focused me, gave me comfort in an anxious household electric with barely-contained panic. I would slip my thumb, worn in as a leather jacket, silken as a dog's ear, into my mouth, circling it with my lips as I tucked it between my tongue and top teeth. It fit tenderly there. I nudged it against my palate, creating a seal against the roof of my mouth. In that movement, the sucking closed a broken circle; it completed a loop; it tied a knot at the end of a rope that otherwise might have spooled out of control.

I never sucked in school. I worried too much about what people thought and was terrified of ridicule. And no photographs exist of me sucking. What I did, I did in private, purchasing an exquisite solitude I still crave today.

And I was told on.

"Ma," my brother would wail when he'd come upon me doing the deed. "Pammy's sucking her thumb!" Busted. Suddenly everything private went public; my inner world cracked open and I was exposed. I wanted my thumb and felt guilty about wanting it. I sucked my thumb but had to plot ways to do so in secret. The pleasure I derived was coupled with shame.

I don't blame my brother. He was conscripted by a task force of adults who had mounted a campaign against my behavior. As my mother tells it, everything started with Grandma Rose: "You were born with your thumb in your mouth. Grandma pulled it out; you put it back in; she pulled it out. And on it went for years."

But my parents kowtowing to others' authority made them just as responsible. They deferred to Rose's old-world view of controlling children. And they pawed the ground in front of the family dentist, a paternalistic warlord who extorted our time and money under the guise of doing what was best for us. (I went to the dentist so often as a kid, it was an activity like dance class, music lessons or religious school.)

By the time they were through with me I had been bribed ("We'll get you a dog;" "We'll pierce your ears"), warned ("Do you want the skin on your thumb to peel away permanently?" "Do you want to get married and still suck your thumb?"), spied on ("Ma, she's doing it again"), mutilated (Herr Dentist fitted me with a metal plate and fangs that hung down from the roof of my mouth), and poisoned (my finger was marinated in a sinister-tasting potion known as "Thumb"). Yet no amount of cajoling and manipulating made me stop. I stopped on my own, because I was ready and wanted to, right before I went to sleep-away camp for the first time.

Not surprisingly, both my daughters love their thumbs. Sonograms revealed them each sucking in utero. Long past infancy they arm themselves against the abyss, as I once did. In fact, they've improved on me: The 5-year-old walks around with her thumb in her mouth clutching a stuffed animal; the 2-year-old sports thumb, animal and blankie.

They sit together on a chair in front of the TV, entwined in one another, sucking. They sit on opposite ends of the sofa, a picture of glazed-over contemplation, one with the left thumb in her mouth, the other the right, enjoying self-imposed timeouts before tearing around the apartment again. They suck voraciously and have no compunction about sucking in public. I wouldn't dream of telling them to quit.

The rest of the world seems compelled to stop them.

Strangers come up to my children on the street, on the subway, in the supermarket, in restaurants and tell them not to suck their thumbs. The dry cleaner says, "Get that thumb out of your mouth." The nursery school teacher reports on her efforts to curb the childish behavior of sucking. And now the dentist is bullying the oldest.

Not all professionals spout this dentist's party line. I find this out after we escape from his lair and I make some inquiries. In theory, at least, pockets of enlightenment exist, not only among dentists but among pediatricians, psychologists and speech therapists. Most of them assure me that thumb sucking for security and comfort is normal. Most agree that it should be curtailed when a child's permanent teeth come in, to prevent damage to the teeth and jaw.

This seemingly universal wisdom is refuted by Dr. Wayne Eric Turk, D.M.D., a pediatric dentist who takes what he calls a "humanistic approach" to his young patients. "I only treat thumb sucking if it's causing a problem," the good doctor says, and explains that sucking does not automatically condemn a child to orthodontia since damage to the mouth depends upon the intensity, the duration and the frequency of the habit.

Children who never suck a day in their lives may need braces if, genetically, their lower jaws sit further back in their mouths and their front teeth protrude. And children whose early years of sucking cause irreversible changes before the age of three may need orthodontic treatment whether they suck after that age or not. So why force them to stop?

"Each person is an individual and should be treated accordingly," Turk concludes, and quotes from the guidelines of the American Academy of Pediatric Dentists (AAPD) that "all treatment modalities must be appropriate for the child's development, comprehension and ability to cooperate."

Tell that to the man in the diner dispensing unsolicited advice. Just what drives him to tell my kids what to do?

Sucking is a primitive act, occurring in utero and deriving from core urges for nourishment and connection. It's emblematic of our neediness, our blind dependencies. Such yearnings frighten and embarrass people. How many of us ever really get those buried needs gratified by others? How many of us figure out how to gratify them ourselves?

Anger and jealousy are stirred in adults who see a child satisfying herself blissfully and in public. "Some grown-ups cannot tolerate their own needy feelings," notes Dr. Marilyn Meese, a child psychologist. "If they don't try to make your child stop, their mastery over their own needs will crumble."

The response is similar to what people feel when they see mothers breast-feeding toddlers or hear about parents who sleep with their children. Giving that kind of solace is not thought to provide closeness or protection. It's thought to encourage over-attachment -- as opposed to the ideal of independence which is valued at a very early age.

How ironic such an ideal is, considering how many of us stagger into adulthood desperate for comfort and find it through compulsive habits far more dangerous to our health than thumb sucking.

The way strangers discipline my children leaves me with the sickening feeling I had when people put their hands on my pregnant belly without asking. I feel invaded, as I did when a woman who saw me with my month-old firstborn in the market scolded: "That child should not be out of the house at her age."

I am not immune to the pressures of public attitudes. I confess that since the oldest started kindergarten this fall, my concern for image and my fear of ridicule leak out of me, unbidden. "Do you suck at school?" I hear myself ask. "Does anyone say anything?" But since the dentist's useless attempt to make my daughter stop, I've vowed to back off, to leave it to both kids to figure this out in their own way, at their own pace, to suck as long as they need to, for as long as that might be.

I may end up in hock up to my eyeballs as a result of orthodontia. And years from now my kids may be sitting around together bitching about me: "Can you believe how oblivious she was? She let us suck our thumbs for eternity." Or they may be in hock themselves, putting in time with a therapist, bemoaning my neglect.

If so, so be it. Until then I say, suck as if your life depends on it.

Pamela Gordon is a freelance writer in New York whose articles have appeared in the Boston Globe, Poets & Writers and New Times, among others.