Uncertainty surrounds a bug that could cause computers to confuse the year 2000 with 1900. This FAQ will do nothing to change that. 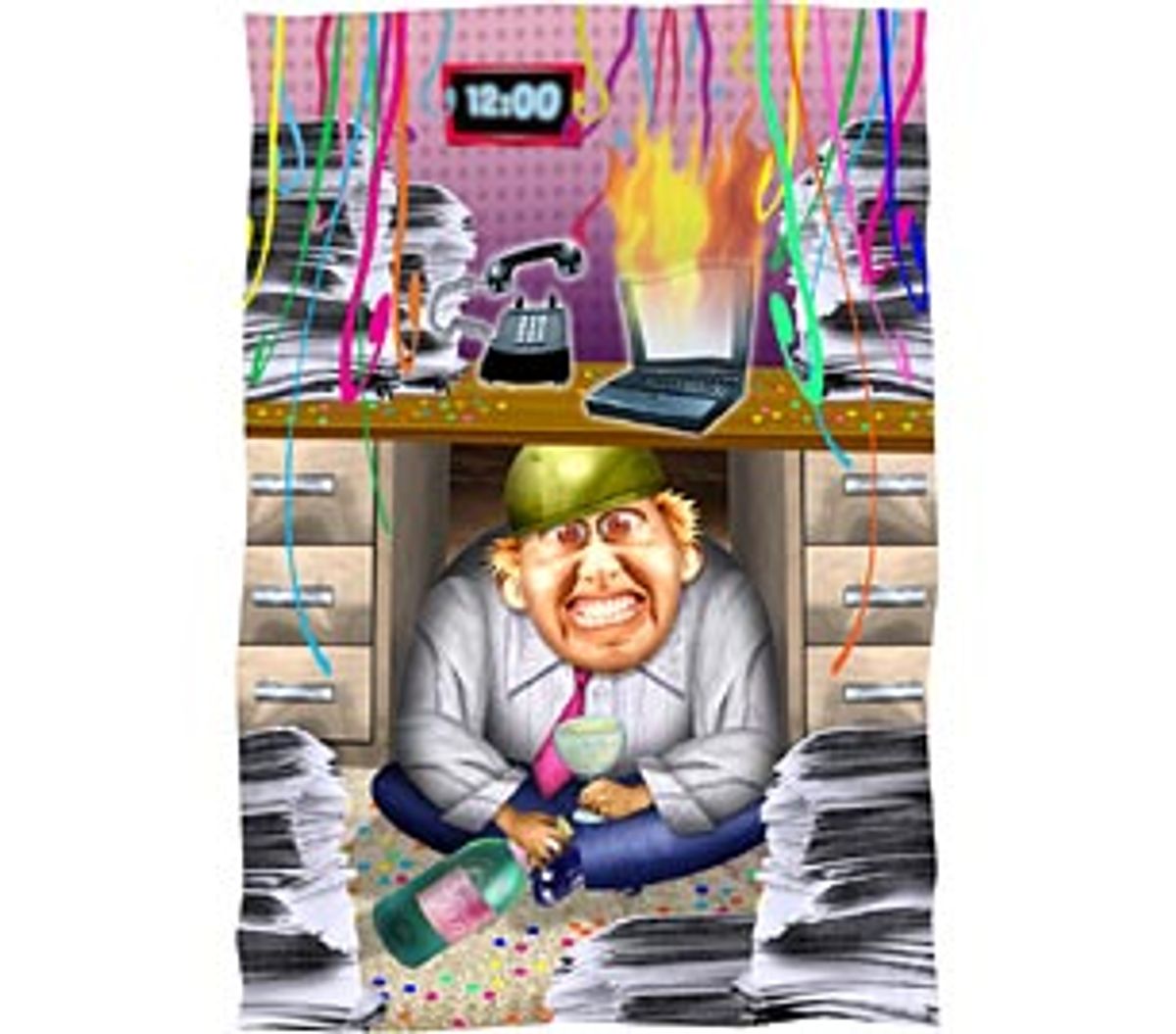 Okay, you've got less than a week before the new millennium hits and you've suddenly realized that, beyond purchasing a pair of 62 kilowatt diesel generators, you haven't done a thing to prepare yourself. Is it too late? What is everyone else doing? And most importantly, will Mr. Coffee still be capable of brewing his magic elixir on Jan. 1?

I don't pretend to know the answers to any of these questions, but I was asked to weigh in, based on having researched and written about the Y2K problem for more than two years, and having watched six and a half minutes of NBC's made-for-TV movie "Y2K," starring Ken Olin. I felt a sense of obligation and duty. If civilization collapsed as a result of widespread Y2K glitches, I didn't want to be sitting at home wracked with guilt that I could've done more to try to prevent it. I wanted to be out looting at the mall.

Hoping that a well-crafted FAQ might allay fears, if not actually save humanity, I began constructing one. I borrowed heavily from existing FAQs, like those written by the Mahir "I Kiss You!!!" Cagri Fan Club and the sci.bio.entomology.lepidoptera newsgroup. And now, here is my definitive list of frequently asked questions about the turn of the millennium:

What are the roots of the Y2K problem?

Contrary to media reports, the mainframe programmers of the 1960s were not shortsighted in using just two digits to represent the year (99 instead of 1999, for example); they were actually quite forward-thinking. Anticipating a depressing state of date-lessness on the biggest Friday night of their lives, they devised the millennium bug to provide a plausible reason to spend New Year's Eve 1999 in front of a monitor, watching for system anomalies and purchasing Seven of Nine collectibles on eBay.

How should I prepare for December 31?

Experts recommend assembling the same amount of food and supplies you'd have on hand for a blizzard, hurricane or other serious storm. Keeping paper records of bank and brokerage accounts from December 1999 through January or February of 2000 is also advisable. Stockpiling a year's supply of grits is probably overkill.

What should I be most concerned about on New Year's Day?

Well, if the U.S. government is right, not any Y2K technology troubles. Terrorism is top of the list for New Year's fears. After the December arrest of an Algerian man who was caught smuggling nitroglycerin across the Canadian border, federal officials have ordered increased security at government buildings and airports. President Clinton has advised Americans to be aware and report suspicious situations, but not to panic. The people should "go about their holidays and enjoy themselves." So by all means break out the party hats and kazoos -- but you may want to use discretion with the pyrotechnics, especially if your travel plans involve crossing checkpoints.

Is my savings account Y2K-compliant or should I take all my money out of the bank?

Well, most U.S. banks have upgraded their systems and tested them for months to be sure they won't fall victim to the millennium bug. Many even plan to open their doors on January 1 -- a Saturday -- to show that they are engaging in "business as usual" and to discourage mass withdrawals. Unruly mobs of passbook-waving citizens will be welcomed with free lollipops and circuitous, imperceptibly-moving queues.

"Experts" recommend having a few days' -- maybe even a week's worth -- of cash on hand. But I wonder who will be accepting it. If the power to your ATM fails, what are the chances that the Wendy's drive-thru will be open? As for getting supplies post-Apocalypse, forget it. Your cash will be worthless at any hardware store filled with bar code scanners and electronic cash registers.

Should I be concerned about accidents at nuclear power plants?

The Nuclear Regulatory Commission reports that safety-related systems in all 103 U.S. nuclear plants are ready for 2000. Even Chernobyl, the notorious nuclear plant in Ukraine, purports to be Y2K-ready. "We have conducted tests and are certain now the main computer will pass the changeover," Chernobyl's Y2K expert, Anatoliy Iliichev, told the Associated Press. Asked about the backup computer, Iliichev held up his forearm, pointed to his digital calculator watch and said, "Brand new batteries."

How much will the federal government spend eradicating Y2K bugs?

The Office of Management and Budget estimates that, by September 2000, the federal government will have spent $8.38 billion on Y2K-related problems. As part of that figure, the Federal Aviation Administration said it had spent $368 million -- the price of two 747s -- fixing its systems. The Pentagon spent $3.6 billion, enough to buy an aircraft carrier. The White House shelled out $23 million, enough for a tanker's worth of Michelob, a crate of t-shirts imprinted with the slogan "We're Gonna Party Like It's 1999" and a steamy, hip-swivelin' command performance by Christina Aguilera. President Clinton said he planned a quiet evening at home with friends.

What's this I hear about champagne shortages?

In some parts of the world, true French-made champagne will be scarce, usually because of parsimonious party-planners. Revelers will be plied with domestic sparkling wine and, in some situations, ginger ale chilled with floating scoops of store-brand sherbet. Do not panic. The situation can be remedied by uttering cutting comments about your hosts to anyone within earshot.

Tiger Electronics, Furby's manufacturer, cautions that some Furbies may turn feral at 12:01 on Jan. 1 and begin gorging on household pets and small children. Tiger stresses that there is no cause for alarm, but the company strongly recommends letting your Furby sleep through the New Year, preferably in a locked metal box buried at least 16 feet underground.

Who is Peter de Jager, and where will he be on New Year's Eve?

De Jager is a Canadian computer consultant who wrote one of the first articles warning the world about Y2K, back in 1993. Since then, he has been the self-appointed Paul Revere of the millennium bug, alerting corporations, IT professionals and national governments to the dangers of Y2K. In the process, he has developed a taste for seeing his name in the media; he now gravitates toward microphones with the single-mindedness of a congressman up for reelection.

In 1997, when I asked him where he would be on New Year's Eve this year, he had a pre-fab answer at the ready: "I will be in a place called Doolin, a small fishing village in West Clare, Ireland. They have two bars. There's good food, good conversation and no computers." After the New Year arrived, he planned to "take a long nap."

Since then, de Jager has changed his plans to something a little higher-profile. Now, he'll be on a plane, flying from Chicago to London to demonstrate his faith in the people who prepared the world's air traffic control systems for the calendar-flip. And, according to an essay on his Year 2000 Web site, he'll be cuddling up to the press during the flight: "I'll actually be doing an interview with a reporter at the fateful moment."

Who is Jewel, and where will she be on New Year's Eve?

Jewel is the banshee-throated chanteuse from Alaska, and on New Year's Eve, one place she won't be is the Sullivan Sports Arena in Anchorage. The Associated Press reported that her millennial engagement there was cancelled in part because of a fear of the Y2K bug, and in part because only 1,000 of the 8,000 available tickets were sold over the course of a month. (Many grandiose celebrations have been canceled due to global Y2K apathy and a little-known millennial affliction called homebody syndrome.)

Wherever Jewel is when 2000 arrives, she'll be well conditioned for any worst case scenarios: When she was growing up in Homer, Alaska, her home had no TV or running water, and as an aspiring singer in San Diego, she lived in a van.

What if I choose to spend the New Year's holiday engaging in my favorite pastime? Hacking, that is.

John Koskinen, chairman of the President's Council on Year 2000 Conversion, asks that you kindly refrain. "Hopefully [hackers] will recognize we're going to have enough things going on that weekend, that this will not be a particularly good weekend to demonstrate the need for more information security," he told a group of reporters earlier this month. Instead, Koskinen suggested that hackers seeking to make a point about the need for increased security should make it the following weekend, when the Y2K frenzy will presumably have waned.

Koskinen also beseeched anyone planning to hack into Hotmail's servers to please retrieve his password, which he had written down on a scrap of paper that has apparently disappeared from his wallet.

Who will be keeping an eye on the world's important systems on New Year's Eve?

Well, Cisco Systems CEO John Chambers, Hewlett-Packard president Carly Fiorina and Microsoft president Steve Ballmer are among the execs who will be manning their desks. They'll be joined by thousands of programmers 'round the world -- the real heroes of this whole global Y2K effort. If not for their selfless toil, et cetera. Raise a toast to them. Then polish off the last cocktail knish.

Will Y2K have any negative effect on the stock market?

The Asian financial crisis, the impeachment of a president, the shambles in the former Soviet Union, the resignation of Treasury Secretary Robert Rubin, the radio dominance of the Backstreet Boys and repeated dour comments by Alan Greenspan haven't managed to put the reins on this bull market. I'm guessing two missing digits won't do it, either.

What if my plans for welcoming in the new millennium involve love in an elevator?

You may be out of luck, Sparky. Many high-rise buildings will take elevators out of service during the transition. In New York, one building management company reports that at about 11:50 p.m. on New Year's Eve, its elevators will all descend to the ground floors and remain there for 20 or 30 minutes with their doors open. "We're not trying to be alarmist," the company's president told the New York Post, "but we don't want anyone ringing in the New Year stuck in an elevator." Stuck?

What about Y2K problems in countries outside the U.S.?

Many nations were late to start identifying and eliminating Y2K bugs. In a statement released in July, the State Department cautioned, "All U.S. citizens planning to be abroad in late 1999 or early 2000 should take the potential for temporary disruptions related to Y2K into account when making their travel plans."

As an example, half of the countries in sub-Saharan Africa have done little or nothing to get ready for the new millennium, according to the International Y2K Cooperation Center, an agency of the World Bank. The other half, reassuringly, have already gone straight to their local Kia dealer for great deals on the 2000 Sportage and Sephia.

How can I differentiate everyday glitches from serious Y2K problems?

"If we watched the world tomorrow as closely as we will watch Jan. 1, we'd see a whole set of things not working," Koskinen told the New York Times. To illustrate that, his Council on Year 2000 Conversion collected some data on typical, everyday failure rates of common systems. Between 1 and 2 percent of the nation's 227,000 automatic tellers are inoperable or out of cash at any given moment, for example. And just about every week, somewhere in the U.S., public connections to a local 911 center fail.

Even after the Y2K crisis recedes from memory like a bad pickup attempt at the punchbowl, we may be in for one more inconvenience. Conventional wisdom says that years that end in double-zero are never leap years. But in fact, there are two every millennium, and next year is one of them. As a result, some computer programs may ignore the fact that Feb. 29 exists in 2000. My advice: You should, too.