"The Cockroach Papers" by Richard Schweid

They're revolting, they're fascinating, they're brilliantly engineered and every one of those vile little bugs is different. 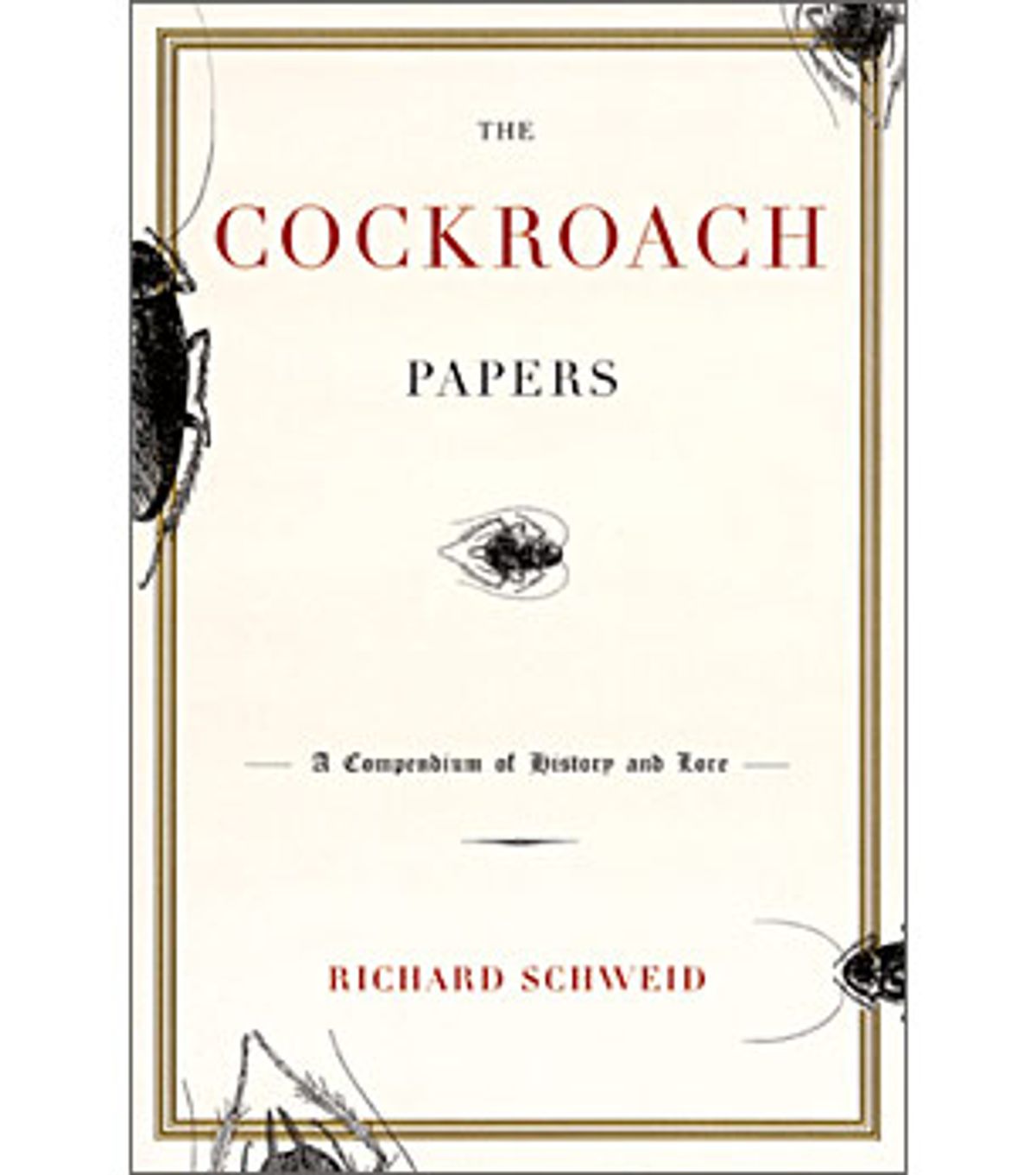 Before I read "The Cockroach Papers," I had an irrational and unfounded disgust for roaches. But Richard Schweid's book set me straight. Knowing what I now know about the digestive, reproductive, circulatory and neurological systems of these remarkably designed insects, I can say with certainty that my disgust is as rational and well-founded as it gets.

I used to think that roaches were indiscriminate eaters who would devour anything in their paths. Now I know the whole story -- which is that although they prefer cinnamon buns above all other foods, they will make do with paper, bookbinding glue, wallpaper paste, leather, wool and milk that has dried around babies' mouths. For this last delicacy they usually wait until the child is sleeping -- a tactic they also use when they are hungry for human toenails, fingernails, eyelashes and skin. Of course, a dead person is even easier to feast on than a sleeping one, which is why the New York City Police Department employs a full-time entomologist to determine whether wounds seen in autopsies were caused by violence or by ravenous roaches.

I also had a vague notion that roaches carry disease. I am now quite clear on that account. Roaches have been found to carry polio, hepatitis, salmonella, streptococcus, shigella, hookworms, tapeworms, dysentery-causing amoebi, leprosy and bubonic plague. Even a squeaky-clean cockroach can make you sick (or kill you) if you happen to be allergic: Roaches are the prime culprits in the inner-city asthma epidemic that takes the lives of hundreds of children each year.

As an avatar of urban dread, the only rival to the cockroach is the Norwegian rat, and polls show that more people fear roaches. I do, too, even though I've faced both rats and roaches in my kitchen and a rat is by far the more formidable enemy. But rats generally travel alone. Roaches come in swarms. Killing the roach you see on the countertop does nothing to the legions of others who are hiding in the cabinets or streaming in from under the sink or waiting behind the walls. Rats are brilliant strategists, but roaches are an invisible army, and what you can't see is always more terrifying that what you can.

Schweid explores both the reasonable and the unreasonable fears that roaches inspire. He seems to have met every scientist who studies the order Blattaria, which takes in the 10,000 or so known species of cockroach. At Vanderbilt University, he meets a researcher named Terry Page, who is trying to locate the insect's biological clock, the part of its body that controls circadian rhythms. Looking at a roach under a microscope, Page remarks, "After you've done this as many times as I have you realize that each cockroach has its own individual face. Each one is slightly different."

"So saying," Schweid writes, "he used a single-edge razor blade and tweezers to make a slice down the middle of the roach's forehead and peel the flaps of skin back from it," exposing "a pearl-gray blob of brain."

Scientists who make a living doing this sort of thing are invariably filled with respect for how cleverly cockroaches are engineered. The common domestic roach, for example, can survive without water for two weeks. It doesn't waste a drop. "Rectal pads, located almost at the end of the animal's excretory system, squeeze water from the mass to be excreted just before elimination," Schweid writes. "This liquid gets recycled to places like the fat body, and the insect's only excretion will consist of dry solids." Whether you like "The Cockroach Papers" will depend a great deal on your tolerance for reading about things like fat bodies and rectal pads. I couldn't put it down myself.

Not that Schweid hasn't made some peculiar choices. He quotes extensively from works of fiction in which roaches are mentioned but doesn't always get around to weaving them into his narrative. Even more incongruous are his long first-person accounts of his travels in the third world. He spends six pages on glue-sniffing kids who prowl the streets of Managua; there's not a roach in sight until the last sentence, when the kids' leader confesses that he once accidentally bit into a roach that had crawled into something he was eating.

I never thought I'd complain that a book contained material that didn't have anything to do with cockroaches, but Schweid writes about these insects so respectfully that his digressions are surprisingly unwelcome. Fortunately, there aren't many of them. Most of the time he gives the cockroach a long cold look and keeps looking when most of us would turn away, until a subject that seemed disgusting becomes fascinating. Now I have nothing but admiration for cockroaches. Which is why I've taken to sleeping in gloves and boots.