"Competitive strategy is not an end in itself"

HearMe's Paul Matteucci talks about the future, the Stanford mafia and what Silicon millionaires are going to do with their money. 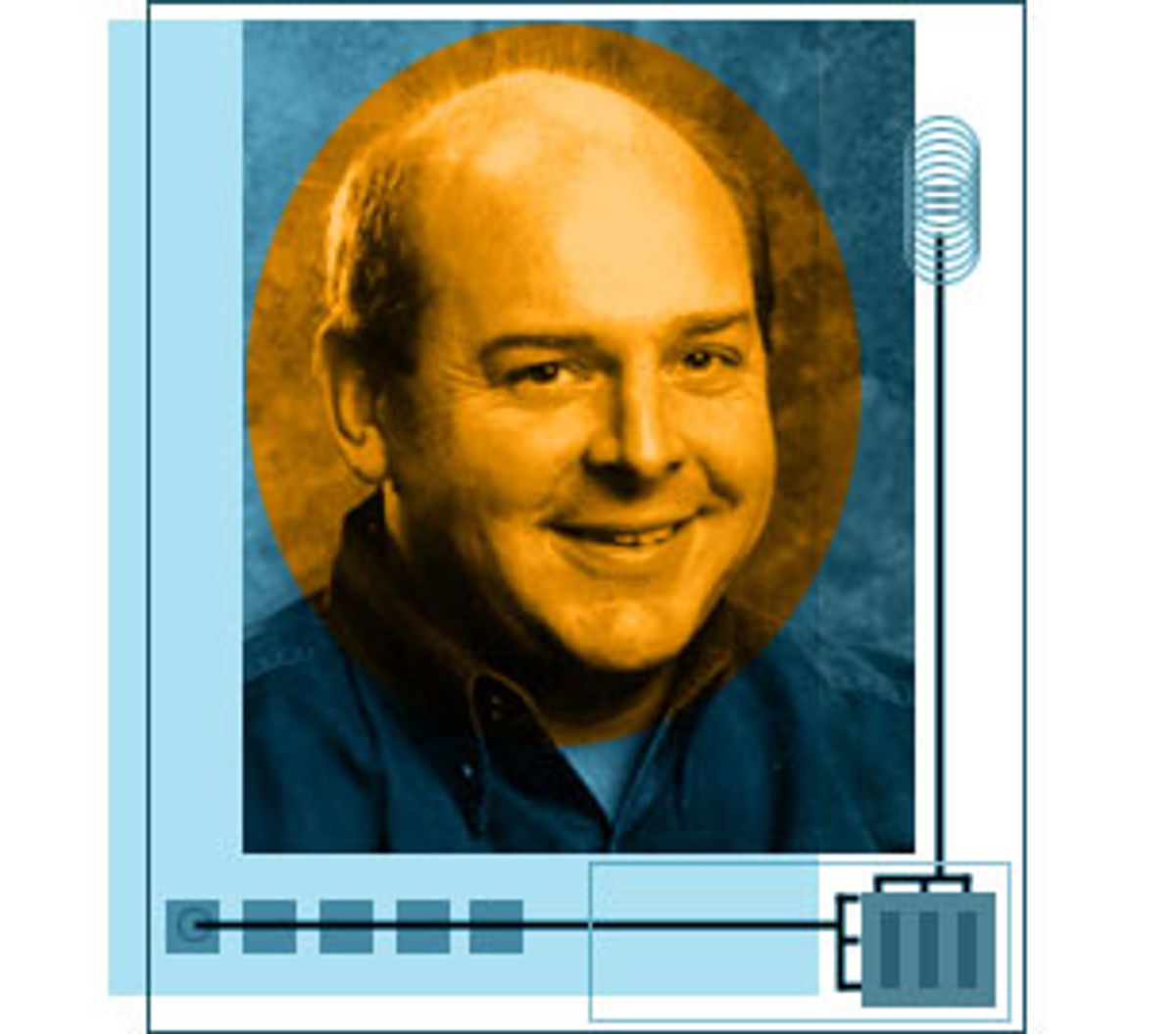 In the age of the Internet insta-millionaire, it's easy to forget that the dot-com explosion is fueled not just by wide-eyed visionaries bobsledding their way to Net riches and programmers working through marathon coding sessions, but by seasoned strategists who remember what the business world was like before there even was an Internet.

Paul Matteucci, CEO of HearMe.com, has worked in Silicon Valley since the mid-1980s. He spent years studying and managing the workings of computer-hardware companies like Tandem and Adaptec before teaming up in 1996 with Brian Apgar, an engineer, and Brian Moriarty, a game designer, to launch Mpath, a company that let gamers play strategy and shoot'em-up games over the Net. Since then, he's deftly steered the company through a series of big changes that included changing its main line of business from games to voice-enabled chat sites -- the Web's much-more-sophisticated answer to the telephone party line -- and a corresponding name change to Hearme.com. And, naturally, he's taken it through that key Silicon Valley rite of passage for both company and chief executive -- the public offering.

Matteucci's office, furnished with castoff furniture from his own house, looks like a suburban rumpus room, in sharp contrast to the slick, over-designed offices of many of Silicon Valley's moguls. Salon Technology got Matteucci on the couch to talk about how to compete in the tech business, the Stanford mafia, and the length of his commute.

How has the atmosphere in Silicon Valley changed since the 1980s?

I see fewer people coming to me in their, let's say, mid-20s to early 30s and saying, "Hey, I want to work with a mentor for a period of time and learn how to be a general manager and then maybe eventually become a chief executive of a start-up in the Valley." More people think, "Well, we want to figure out how to make a lot of money pretty rapidly so we have more life choices when we're 33 or 34 years old," as opposed to, "I'm just going to build my skill set so I can manage more interesting and more challenging companies in the future."

It will be interesting to see sort of what this new wave of folks that are focused on [getting] to the point of material comfort are going to do with it. Are they going to sit back and just enjoy their blessings? Or are they going to then contribute their lives and time to helping the poor or helping children or solving world poverty or whatever? Are they going to express themselves in the arts? I don't think we know yet. I don't think we know what's going to happen with the new sort of cadre of very, very wealthy 30-year-olds coming from Silicon Valley and the development of the Internet. It could be great if they devote the second part of their lives to things that are beneficial, or it could be kind of self-indulgent.

You started at Texas Instruments when personal computers were just a blip on the technology radar. T.I. tried and ultimately failed to make a dent in the PC business. Did you take away any lessons from that experience that you brought to Silicon Valley?

I learned a lot of things from that experience. In fact, I wrote a case [study] while I was at Stanford Business School on the home PC competition between T.I. and [companies like Commodore Computer]. If I had to pull one major lesson I've applied again and again -- um, mostly successfully -- is that business is really not about competing. It's about making money. T.I.'s culture was so competitive that they would destroy entire market segments in order to make a competitor lose -- even if it meant they lost too. In electronic watches and calculators [T.I. drove] prices down way faster than they could get costs down. To the point where the markets just went away.

Competitive strategy is a means to an end. It's not an end in itself. That's lost in the way some people learn competitive strategy. In our world we get rewarded by avoiding competition -- by building things that are truly innovative, creating markets where none existed before. It really bugs the heck out of me when I'm [advising] a small company and they're focused so much on competition that they're spending way too much time thinking about how "We head this guy off or we head that guy off" rather than building a product that will generate revenue and profit.

You've spent many years in Silicon Valley in the hardware business. Now you're at a Net company, you're running it and you've gone public. How does it feel to run a public company? Do you feel intense pressure from Wall Street to keep your stock price up?

I had the benefit of being at a high level at Adaptec when we were a public company, so I was used to meeting the numbers every quarter. That hasn't really bothered me so much. When I was in the PC peripheral space if you met and exceeded your numbers you were going to get rewarded.

[But on the Internet,] when you don't have objective numerical metrics by which to judge and compare companies, you begin comparing stories. For example, if a company has a choice of getting a bad deal with a portal or five really, really good deals with other companies, the bad deal with the portal will probably generate more market capitalization for them than the five really, really good deals with five other good companies. There's too much credit being given to the size of the relationship that you have with another firm. And not enough credit, frankly, being given toward just showing a steady progression of revenue growth and profitability. An AOL deal is worth a lot of market cap -- whether or not it's a fundamentally sound deal to the company.

After Texas Instruments you went to business school at Stanford -- the most active spawning ground for tech execs anywhere in the world. I run into Stanford Business school grads at least several times a week. Is there a Stanford mafia?

Yeah, sure. It's a big secret! We all -- we all sit with our backs to the wall and look out windows, you know, so that we don't get surprised by what's coming.

No, typically, you'll find people that you've worked with before -- in either other companies or in the V.C. world. And you'll kind of re-institute those relationships. It's funny. It's not something that kind of starts when you leave business school and lasts for a lifetime. I do have friends that I've kept in touch with ever since business school. But it's more like we all left business school, we kind of went through some formative years in our career, and now we're in leadership positions in various organizations -- and now we reunite. There's a level of credibility there. We understand each other. We know what a guy was like 10 years ago. We assume that he's still as smart and as trustworthy and all those things. I've renewed relationships with people from my class of '86 that I didn't see between then and now except at reunions.

Will Silicon Valley ever be supplanted by the next tech hot spot? What would make that happen?

It's likely that [what pushes technology companies to other places] will be a failure of the Silicon Valley infrastructure, rather than the success of some other location. In the five years since the Internet took off you can just see the Bay Area infrastructure almost being brought to its knees in terms of traffic and housing prices and being able to get young employees at a reasonable wage. I just see it getting more difficult every year. Almost by the week you can see traffic get worse and infrastructure begin to crumble. It used to be that San Francisco was just a little ways away from San Jose. Now it can be two and a half hours away from San Jose.

The Internet substitutes for good physical infrastructure to some degree. But I don't think we're there yet. I don't think we've really built the tools to make remote productivity a very good thing. It's now a tolerable thing, but it will get there.

The infrastructure is basically at its knees at this point. I have a 13-mile commute and it can take me an hour to an hour and 20 minutes on a bad day -- with no accidents. I mean just a bad day. People used to talk 10 years ago about flextime and shifting work hours. Well, people are just doing it by showing up late. The day starts at 11 for some people because of their commute and it ends at 8, instead of starting at 8 and ending at 5. There's sort of this grass-roots time shifting going on everywhere.

Are you talking mostly about programmers?

It's not just engineers anymore. Five years ago I would have said, "Yeah, software guys -- they just like to work 'till 2 in the morning." How many times have we gotten asked in the last two years, "Are you going to open an office in San Francisco?" Well, you know, seven years ago or eight years ago it would have been no big deal to commute down or up to the city. Now it's like [San Francisco residents] don't want to come work for you unless you have an office in the city. Or conversely, if they're [Silicon Valley] engineers, they don't want to drive up to the city.

I know you have a ranch in Montana. Is that a kind of release from the pressures of Silicon Valley? A release from work?

I get there about five or six times a year, probably 40 days a year. Those 40 days in Montana are kind of working at half pace. Almost every day I'm in Montana the Federal Express guy'll be coming by and he'll drop me off some stuff to do and I'll do a few calls in the morning and stuff like that. And then by mid-afternoon I grab my fly rod and go out to the river and catch some fish or go up to the park and see some geysers, some animals, or, or whatever. It's really a time for me when the pace of my work changes. It doesn't ever really go away.