Some still reeling, readers share their best sexual experiences of the millennium. 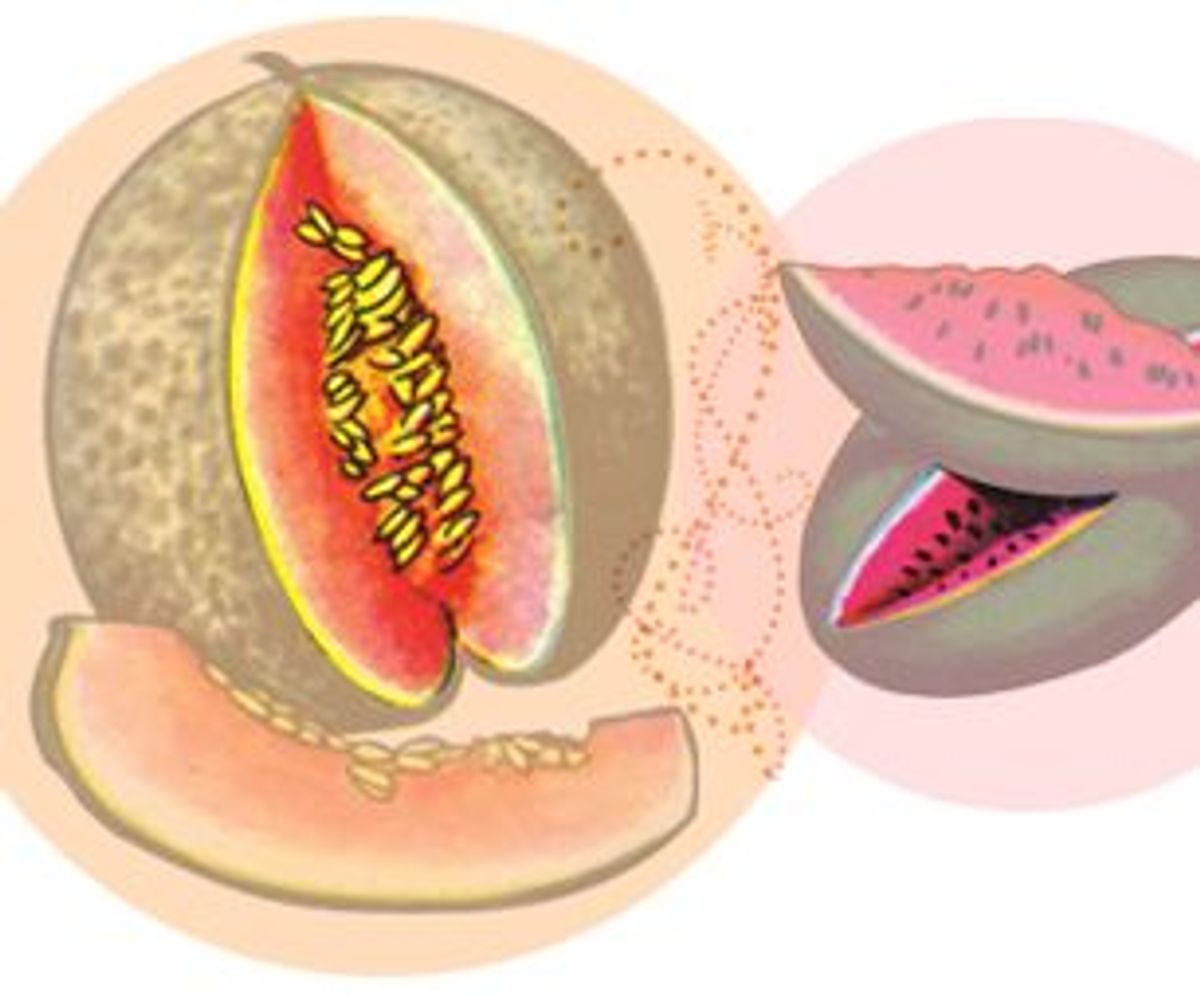 Three weeks ago, we invited Urge readers to share their favorite sexual
experiences of the millennium. The request was as imprecise and
ambitious as sex, and the amorous rose to the challenge.

Almost unanimously, people preferred moments they had directly
experienced, effectively whittling the millennium down to about 80
years. But this window proved wide enough to accommodate an impressive
sexual diversity. From summer-camp necking to rejections on the Equator,
people found their hot and heavy in a jumble of circumstances truly
deserving of another steamy 1,000 years on the planet.

It was our anniversary -- one shining, difficult, delicate year behind
us as lovers. We escaped to a country inn and devoted ourselves to
having as much sex as possible in 48 hours, with a few breaks for sheep-petting,
blackjack and pancakes.

Saturday night, after a long afternoon's labor between the sheets, we
dressed and drove down a long country road to a Connecticut-fancy
restaurant in a converted barn. We were seated in the hayloft, looking
down on most of the other diners, with a few other patrons at tables
about 10 feet away. We were alone -- sort of.

Our glasses clinked. I smiled into his sweet blue eyes. He took my
hand in his and said "Do you know what we did today? As soon as I woke
up, I reached for your breast ... " He began stroking my fingers,
telling me what he had done to me that morning, that afternoon, that
evening and what he planned to do to me in the bathtub that night, using
that voice he uses when he wants to make me crazy.

His words inflamed me, made me flush and grin wide. As he caressed my
fingertips, they softened, became as sensitive as my nipples, my thighs.
I felt my body warm, my muscles tense. My eyes darted around the
hayloft once -- and I dared to close them, lean back and surrender to
him. He moved his fingers higher, massaged one knuckle, then the next,
as my breath came faster. He continued to talk in that slow, husky
voice, evoking each moment of the day's pleasures as he encircled my
middle finger with his hand, working it up and down. At last he reached
the soft web between my middle and ring fingers, teased it ever so
gently, and whispered "I love you." I clenched, gasped. And I came.
Hard and long and hot, mouth open, head back, legs apart, I came.

He tells me that I let out a soft moan, not loud enough for anyone to
hear, and I had no choice but to believe him. I probably had 20 orgasms
that weekend, hundreds that year, but that one remains a glowing ring
around my body, the sweet anniversary climax from the man I love so
much.

I was traveling in East Africa in the mid-'70s and had been on the
continent for about three years. Sex then was free and easy. I was
hitching in the Kenyan highlands with beautiful surroundings, the snowcapped Mt.
Kenya always visible. There was a sign on the main road marking the
equator and off to the side was the Equator Bar.

The bar had a thick yellow line down the middle of the floor with a
large "S" on one side and an "N" on the other. I walked in, straddled
the yellow line, looked at the barmaid with that look and, in Swahili,
said, "Let's have a go." I envisioned one leg pointing north, one
South and me riding latitude 0. She looked up for a moment and then
said, "Don't even think about it." Of all the screwing I did over the
years, that's the best lay I never had.

I contacted a woman through an e-dating Web site. She said she didn't
actually live in L.A. yet, but she was moving here. During the course of
our e-mail and, later, telephone calls, she told me she was "very open
sexually." I proposed this: When you arrive at your temporary apartment
in Los Angeles, call me. I will call from my car when I arrive. Leave
the door unlocked, get undressed and get all the way under the covers. I
will enter your room with two blindfolds. I'll hand you one, then I'll
get undressed and join you under the covers. We'll remove the blindfolds
once we're in the midst of our orgasm. She replied, "That's crazy! We'll
take the blindfolds off only when we're finished." And with that
compromise, we did it.

My best sexual experience: The morning my just-out-of-jail Vermonter
Mountain Man dragged me out on the fifth-floor fire escape of my
New York City apartment at 6:30 a.m. after a night of wildness and bent
over the railing. Way over the railing. I'll never forget standing
behind him looking out over all the other high-rises in the area under a
crystal-clear blue May sky.

You see, it began quite innocently. I had just finished jumping, up and
down, up and down on my trampoline. Because of this routine I often get
large cramps in my upper thigh. For this reason I keep a special thing
on my bed. It is weighty, but not too much so. It is hard and strong, and is
capable of working me until every last bit of stress is eaten away.

I bought my Percussion Massager from Walgreens for $63 -- at 300 pulses
a minute, a swell investment. On this particular day, while I was
working the head up and down my buttocks, my lower legs and my upper
thigh, it did more than ease my leg cramps: I experienced the most
enormous, mind-altering release of sexual tension I have ever known.

Three years ago: Lights out in 10 minutes. Some campers lingered in
the gazebo and some felt their way through the night back to their
bunks. Now was the witching hour for couples, the time when
13-year-olds like myself got butterflies wondering how to kiss. I found
Ashley in the crowd and we held sweaty hands. We made our way to the
woods. There was no moon. We found a spot and stood. I wished I was
tongue-tied but charismatic, but I was just tongue-tied.

Other couples were in the grove, too -- uneasy oases in a desert of
prudes. I tried looking to them for cues. I figured I should gaze at
Ashley's shadowed face and wait for magic. It would come by the count
of five, and then I would cock my head and move in. We kissed hard, our
noses and tongues rubbing and our bodies rigid. We're kissing, I
thought. We stopped and I mumbled, "I gotta go, they said ..."

We walked to our bunks. I watched her disappear and then I wiped my
mouth.

He was my roommate's boyfriend. She was manic-depressive and she drove
me crazy. But she was funny and clever and talented and I liked her. I
became as obsessed with him as she was. Her obsession roared out of
her, out of her eyes, her words, her gestures, even her hair. As I
couldn't voice my own obsessions to her, they found their way into the
deepest part of my sex and began to expand there with utter despair and
longing. And the months went by.

I finally found my way into his bed and all I knew was my want. Hunger
and tongue and muscle and breath. Guilt be damned and yes I'll sign it,
I'll sign anything, just get me out of these clothes. The moment he
entered me, a warmth spread through my abdomen, and something so much
more than pleasure radiated throughout me. My throat opened up and I
involuntarily cried out as it shot out the top of my head. I saw a
bright flash and a blissful light rained down on me. Shakti had
arrived.

But I didn't know it at the time. I recall wondering if I'd just had a
"real" orgasm for the first time. If so, what were all those other
"orgasms" I'd thought I'd had? Is this what other women had been
experiencing all along? Some time later, as I basked in Shakti's
presence and light, I thought, "Ah, so this is what joy is." But mostly
I was simply awash in her ocean and the rhythm of our coupling. We
lasted for hours, until he was finally and utterly worn out. I could
have continued for days.

He had matched me count for count, breath for breath, and had become
aroused time and again after being spent. We attained a sexual union
that transcended both lust and emotional need by encompassing it, not
excluding it. I hurt him slightly at one point -- perhaps a skin pinch
of some kind -- and as I apologized he lolled back and said, "No no no,
I'm with a soft-skinned Venus."

Flattery, yes. But he was in something of a daze and I realized some
years later, once I'd finally figured out what had happened, that he
had been with Venus that night, and Inanna, and Astarte, and
Isis, and Kali and Bridget -- they were all there, shining out of me,
out of every corner of my being.

Sex of the millennium? This was the sex of every millennium since life
began. It is the basis of our evolution, urging us back to our origin.