With his globally recognized "Peanuts" characters, he delved into the psyche of children and created daily morality plays that became part of the public consciousness. 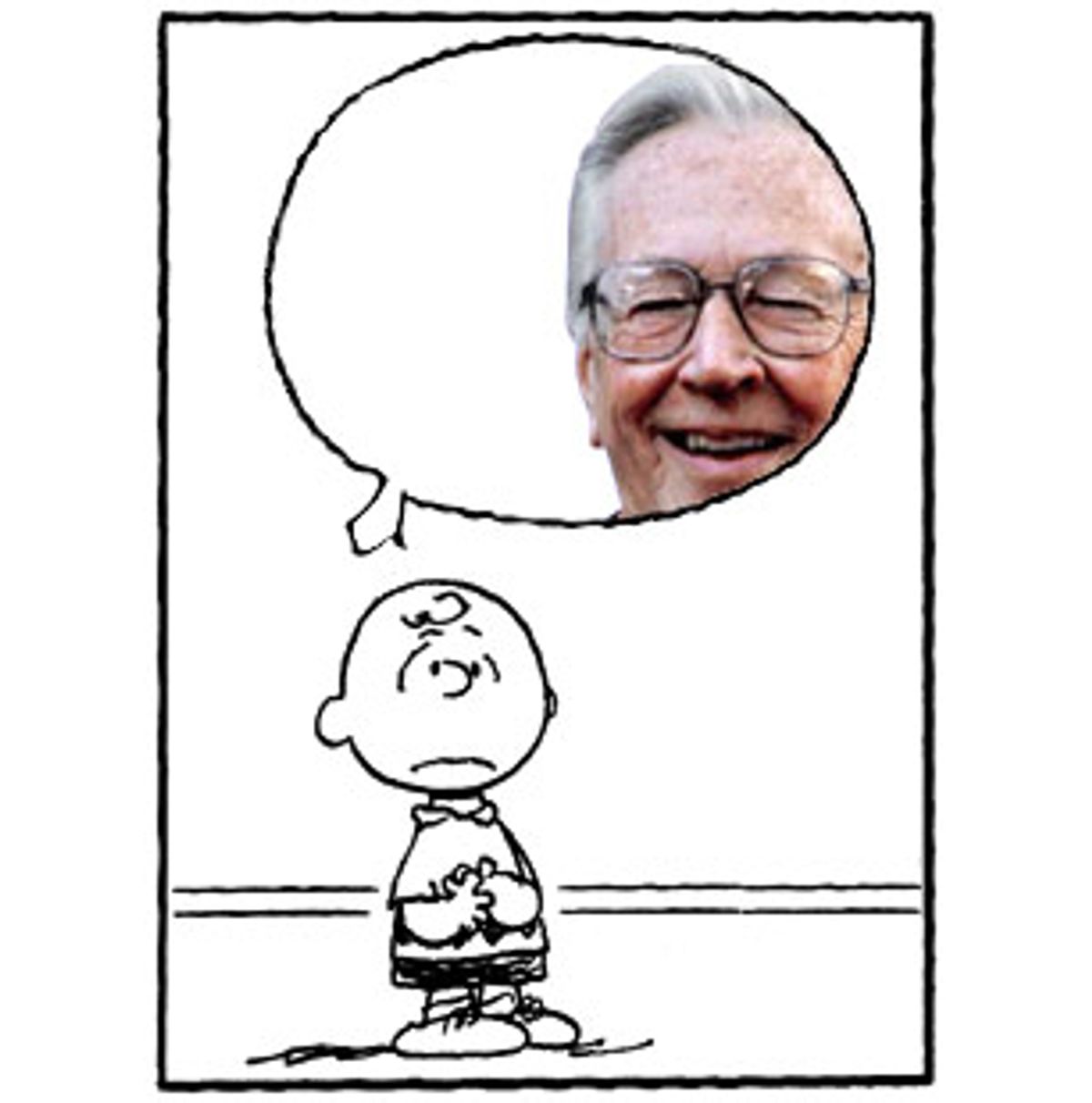 The year is 1995 -- the Red Baron is long dead. Now it's Snoopy vs. the
California Department of Insurance. Metropolitan Life, the insurance
company whose ads feature Charles Schulz's popular "Peanuts" characters, is
in trouble. In her Newsweek column of March 6, 1995, Jane Bryant Quinn
details complaints against MetLife representatives accused of screwing
seniors with shady deals. "In California," she writes, "MetLife cases
are popping up like mushrooms ... A California law firm will soon file a
class action suit against the company." And all the while, Charlie Brown
-- the same round-headed kid who railed against Christmas commercialism
and cradled a pathetic evergreen for successive generations of wide-eyed
children -- grinned out of countless ads bearing the slogan: "Get Met.
It Pays."

It's a problem never faced by the likes of Garry Trudeau and
Bill Watterson. The creators of "Doonesbury" and "Calvin & Hobbes" would not
allow their charges to earn spare cash with endorsements. "I like to
keep my characters on the reservation," Trudeau once said. But if the
MetLife episode embarrassed Schulz, he gave no indication -- "Peanuts"
characters are shilling for MetLife to this day. Schulz may not even
have noticed. The man behind the most influential comic strip in history
has always displayed an unsentimental attitude toward his creations.
Cultural icons they may be, but they're also his living. "I just draw
them," Schulz said recently. "That's all."

And now that's all over. Fifty years after "Peanuts" made its first
appearance in seven newspapers, colon cancer, Parkinson's disease and a
series of strokes have forced the 77-year-old Schulz to retire.
"Peanuts" will bow out with a final color strip on Sunday, Feb. 13.
The daily strip ended Monday with a farewell letter from Schulz.

The Midwestern cartoonist's simple yet evocative drawings do not enjoy
quite the same cultural prominence they held back in 1965 when his first
TV special, "A Charlie Brown Christmas," won an Emmy, becoming as
integral to the season as mandarin oranges (and almost incidentally
establishing Vince Guaraldi's "Linus and Lucy" theme as one of the most
recognizable piano compositions of the 20th century). But never mind --
"Peanuts" changed the cartooning landscape in a way that even the Pulitzer
Prize-winning "Doonesbury" can only envy. Trudeau said as much recently in
a tribute to Schulz written for the Washington Post. "'Peanuts' was the
first (and still the best) post-modern comic strip," Trudeau wrote.
"Everything about it was different. The drawing was graphically austere
but beautifully nuanced ... Although Schulz would say the very notion is
preposterous and grandiose, he completely revolutionized the art form,
deepening it, filling it with possibility, giving permission to all who
followed to write from the heart and intellect."

Actually, "Doonesbury" may well be an exception among today's cartoons, in
that the true spiritual ancestor of Trudeau's strip is not "Peanuts" but
Walt Kelly's brilliantly absurd and sharply political "Pogo." But most
contemporary cartoonists owe a significant debt to Charlie Brown and his
back-stabbing pals. Watterson is now retired. "Calvin & Hobbes," a
pioneering and much-imitated strip in its own right, could arguably be
said to resemble little else but "Peanuts." While nervy, obnoxious young
Calvin was certainly no Charlie Brown, his unsentimental and
sophisticated observations often echoed those of Schulz's ur-loser.
"People who get nostalgic about childhood were obviously never
children," Calvin remarks after a schoolyard beating. In a strip
published over two decades ago, Charlie Brown walks his familiar,
barren suburban sidewalk, jeered at by a succession of passersby.
("Hey Charlie Brown, is that your head or are you hiding behind a
balloon? HA HA HA HA HA!") Arriving home, he boots a radio across the
room after hearing the announcer say, "And what, in all this world,
is more delightful than the gay wonderful laughter of little children?"

Turn to the comics page of today's paper and a couple of things quickly
become apparent. One is the obnoxious calculation behind the many strips
clearly inspired by marketing surveys. The other is how few strips are
actually aimed at children. Today's syndicated features are usually
venues for the same sort of observational adult humor found in sitcoms,
stand-up routines and even novels. And, ironically for a strip in which
adults never appear, it was "Peanuts" that paved the way for the current
emphasis on grown-up themes.

Sophisticated cartooning did not start with "Peanuts." In the early '20s,
George Herriman's "Krazy Kat" was adapted for a ballet. "Pogo" debuted a
year before "Peanuts," and cartooning is unlikely to get any better than
that. But "Pogo" mixed Marx Brothers-style lunacy with politics, and there
was cartooning precedent for both. "Peanuts" was something new. In the 1950s,
readers searching for existential angst usually opted for Salinger --
until the arrival of good ol' Charlie Brown. "[Schulz] did something
entirely different from what the rest of us did," said "Beetle Bailey"/"Hi
and Lois" creator Mort Walker in the Washington Post. "I write and draw
funny pictures and slapstick; it's a joke a day. He delved into the
psyche of children and the fears and the rejections that we all felt as
children."

Charles "Sparky" Schulz was born in Minneapolis in 1922. After serving
time as an infantryman and eventually a staff sergeant in World War II,
Schulz sold his first comic strip to the St. Paul Pioneer Press in 1948,
calling his creation "L'il Folks." United Feature Syndicate picked it up
in 1950 and to Schulz's everlasting horror renamed it "Peanuts." The
first strips did not represent an immediate cartooning revolution.
Still, the tone was established early -- immediately, in fact. "Peanuts"
debuted with a couple of kids on a step watching Charlie Brown go by.
"Good old Charlie Brown," says Patty. "How I hate him!" (As die-hard
"Peanuts" followers know, this Patty was not Peppermint Patty, the fine
athlete/crummy student introduced in 1966. The original Patty seemed to
disappear, along with other secondary figures such as Violet and
Shermy.)

Soon the cast of Schulz's little morality plays became part of the public
consciousness as no other cartoon figures before them -- the hapless
Charlie Brown; the philosophical, blanket-clutching Linus; the
sibling/budget psychiatrist/human pothole Lucy; and, perhaps most popular
of all, Snoopy, the most complex dog in the history of this or any
other creative medium. Although Charlie Brown's fantasy-prone beagle
came to represent the happy face of "Peanuts" (and not surprisingly
provided the easiest entree into the world of marketing, where "Peanuts"
characters are now said to generate a billion dollars annually), the
Snoopy of the daily comic strips is not just the carefree, dancing soul
seen in the TV specials. He is in many ways a more fully rounded
version of Charlie Brown, capable of the same nihilistic observations
about our place in the cold universe but, unlike his master, also blessed
with a little joie de vivre. And the perspective of a dog. "They always
act like they're doing you such a big favor," he mused, preparing to
catch an airborne morsel of hot dog.

"Peanuts" characters became worldwide symbols of America on par with
Mickey Mouse. (Note that the Knott's Berry Farm theme park hired them to
compete with Disneyland just down the road.) Unlike the born-to-be-sold
Mickey, though, the commercial overkill surrounding "Peanuts" is in
marked contrast to the simple, almost austere spirit of the source
material.

Among Schulz's most notable achievements may have been the thoughtful
Christian spirituality he injected into the strips on a regular basis,
sometimes overtly and sometimes, as Robert Short pointed out in his 1966
book "The Gospel According to Peanuts," by simply mirroring Scripture
indirectly. It was no accident. "I liked Biblical things," Schulz
recently told Newsweek. He has often spoken of his deep religious faith
but, not surprisingly, it is a faith tinged with realism. "Once you
accept Jesus," Schulz wrote in Decision magazine in 1963, "it doesn't
mean that all your problems are automatically solved."

Charlie Brown and Linus would occasionally sit on the couch poring over
some Bible verse that would be punctuated by an afterthought from
Snoopy. Thanks to his unassailable position in the cultural mainstream,
Schulz could afford to display a gentle irreverence to Scripture that
might have gotten another artist into trouble. (As it was, Schulz told
Newsweek that the only serious editorial complaint lodged against him
came when he introduced the character of Franklin who, depending on your
point of view, either integrated the strip or ruined the neighborhood.)
Schulz's spiritual curiosity is the sort that can be appreciated even by
nonbelievers. It stands in stark contrast to the increasingly
heavy-handed pulpit pounding of Johnny Hart, creator of the long-running
strip "B.C." Schulz's characters ask questions about God. Hart's spout answers.

The "Peanuts" gang did not age (at least not since the earliest strips,
when they appeared to be much younger), but they did change. Charlie
Brown's battles with failure and despair never ceased, but in later
years he was less often the target of overt hostility. Chuck was even
the object of crushes held by Peppermint Patty and her androgynous pal
Marcie, and although he never obtained his heart's desire -- the Little
Red Haired Girl -- Charlie Brown had something like a genuine fling at
camp with a girl named Peggy Jean. He also learned to dance.

Like an adult who has left behind the blatant cruelty and hostility of
childhood but still bears the scars, Charlie Brown lies awake at night
and asks questions of the void. The "Peanuts" reader always knows whose
questions they are. "Everything I am is in that strip," Schulz said
recently.

Schulz paid a price for flogging his little wards so mercilessly. The following
conversation happened in a
coffee shop recently:

The strip's daily appearance in the paper evidently wasn't enough to
convince this young woman that Schulz was still above ground. Some of
the blame for that must surely fall to the excessive marketing that
turned his original winsome creations into a monolithic commercial
franchise. And if little children look skyward at the Macy's parade and
see only the giant inflatable effigy of an insurance salesman, that's a
shame. But in no way does it diminish the accomplishment of Charles Schulz.
In retirement he leaves behind an important example. "All right,"
Charlie Brown says after once more receiving assurances from Lucy that
she will not pull away the football just before he can kick it. "I'll
trust you. I have an undying faith in human nature. I believe that
people who want to change can do so, and I believe that they should be
given a chance to prove themselves."

Moments later he is, of course, flat on his back. Lucy stands over him,
holding the unkicked ball. "Charlie Brown," she says, "your faith in
human nature is an inspiration to all young people."