A brilliant songwriter, vocalist, instrumentalist, producer and arranger, he had the aphoristic grace of a natural poet who was steeped in the rhetoric of the black church. 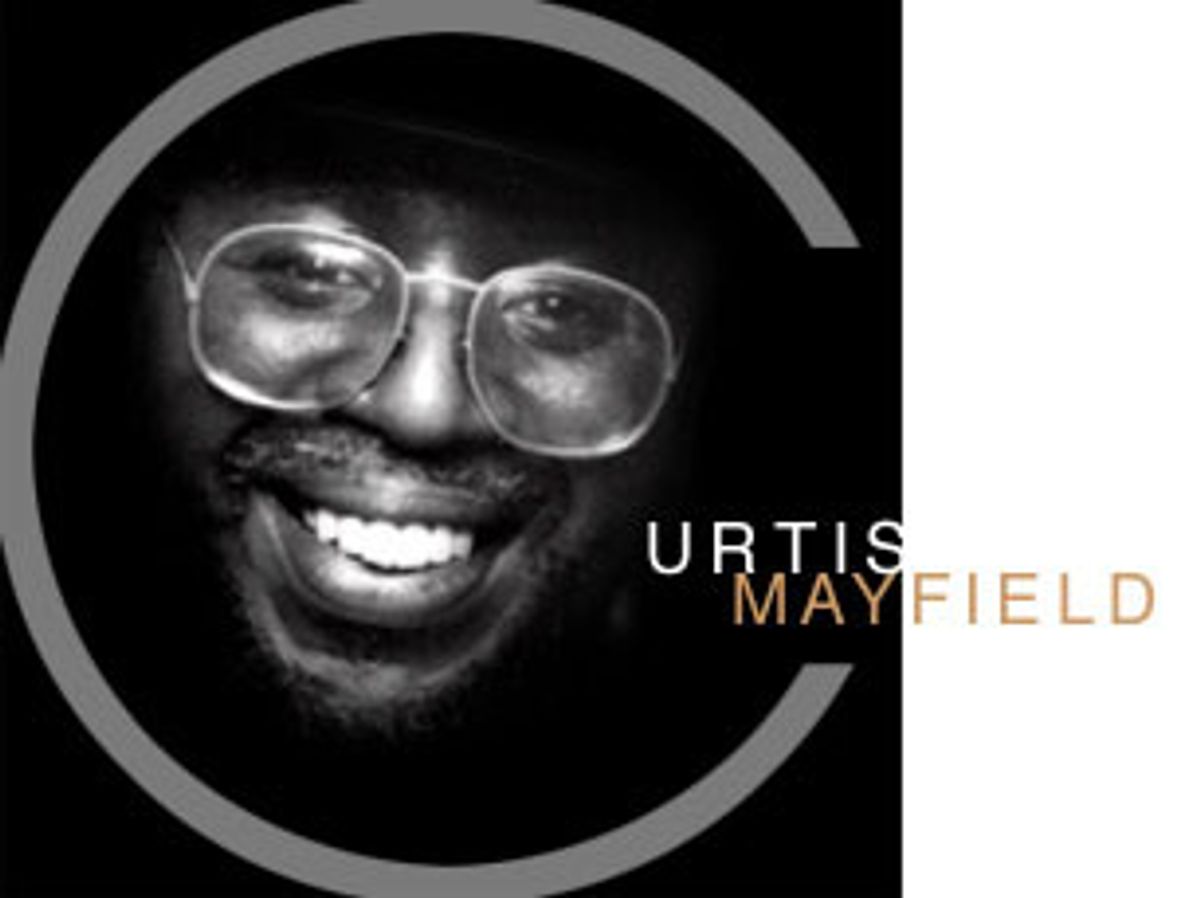 FILE-- Curtis Mayfield is shown in this undated handout photo. The composer and songwriter, whose string of hits "Superfly," "People Get Ready,'' "Talking About My Baby,'' and "Keep On Pushing,'' has died Sunday, Dec. 26, 1999. Mayfield was 57.(AP Photo/Curtom Records, ho) (Associated Press)
--

American popular music in the rock era has been dominated by cult of personality -- by "superstars," flamboyant charismatics, grandiose gestures. Curtis Mayfield, who died the day after Christmas, 1999, at the age of 57, was an exception to the rule: a popular music titan who was never a pop star. Few musicians who sold as many records and exerted as great an influence as Mayfield had as modest a public persona.

He began making hit songs in the late 1950s. For the better part of the next two decades, he was at the forefront of popular music, a pioneer of both '60s soul and '70s funk. And his gritty but never nihilistic excursions into black pop make him the spiritual forefather of the more positive and uplifting strains of '80s and '90s hip-hop. But even at the height of his fame as a million-selling solo artist, Mayfield was a self-effacing, unlikely star.

To the extent that he projected an "image" it was that of a hip intellectual: His scraggly beard and thin-framed eyeglasses gave him a professorial cast, a fitting look for a musician whose songs bristled with intelligence and unashamedly brought the didactic urgency of gospel to the secular airwaves.

Mayfield was one of the most complete musicians in the history of black pop; only Stevie Wonder and Prince rival the aplomb with which he balanced the roles of songwriter, vocalist, instrumentalist, producer and arranger. This autonomy gave Mayfield the freedom to experiment, and he was consistently several steps ahead of his contemporaries.

In the 1960s, as the leader of the Impressions, Mayfield developed a distinctive soul style, combining gospel-based vocal interplay, swooning string and horn arrangements, and his own rolling, stately guitar lines. Even more groundbreaking was his lyric-writing for the group. He had the aphoristic grace of a natural poet who was steeped in the rhetoric of the black church, and he poured this gift into songs of inspiration and uplift, which took the themes of the civil rights movement to the pop charts: "Keep On Pushing," "Amen," "Meeting Over Yonder," "We're a Winner," "We're Rolling On."

The most majestic of these, the chiming ballad "People Get Ready," is a testament to Mayfield's craftsmanship: By sheer force of poetic economy and musical eccentricity (those oddly delicate guitar figures; that queer whole-step leap between verses two and three), he wrestled one of the most hackneyed of American images -- the glory-bound train -- into what is, with Sam Cooke's "A Change Is Gonna Come," the greatest message song of the soul music era.

Mayfield left the Impressions to pursue a solo career in 1970, recording a string of albums which were remarkable for the scope of their musical ambitiousness and social awareness. Tackling issues of urban poverty and desperation, drug abuse and violence, black pride and self-determination, Mayfield wrote songs with a bluntness and narrative verve that anticipated rap. "Superfly" (1972), Mayfield's gorgeous soundtrack to Gordon Parks Jr.'s seminal blaxploitation movie, is the most celebrated of these recordings; but perhaps the best and most important was "Curtis," Mayfield's 1970 solo debut.

He had absorbed the influence and expansive spirit of the Beatles and the Beach Boys, and "Curtis," a lushly orchestrated suite of thematically linked songs like "(Don't Worry) If There's a Hell Below We're All Going to Go," "Move On Up" and "We People Who Are Darker Than Blue," was Mayfield's soul music answer to "Sgt. Pepper's Lonely Hearts Club Band" and "Pet Sounds." A tougher and more baroque version of the musical-uplift he had produced while leading the Impressions, "Curtis" inaugurated the heyday of politically charged '70s soul, which would be highlighted by Marvin Gaye's "What's Going On" and Stevie Wonder's "Innervisions" and "Fulfillingness' First Finale."

The fluency with which Mayfield addressed social concerns marked him as one of only a handful of truly eloquent, conscience-driven American singer-songwriters, and the eulogies that have followed his death have treated him, rather breathlessly, as something of a secular saint -- a kind of American Bob Marley. This sort of hyperbole isn't surprising: Rock critics are invested, to the point of ridiculousness, in the myth of pop music's political relevance, and generally find it easier to amplify that myth than to discuss a piece of music. In Mayfield's case, this is a pity, because his music -- in particular the music he recorded on that glorious sequence of early-and mid-'70s solo albums -- is his great legacy.

Those records were trailblazers of what might be called black psychedelia. Take a listen, for instance, to "Superfly": The lyrical string and horn arrangements that made the Impressions records such sweet listening are gloriously, woozily bloated into shapes amorphous and trippy; the bass is dark and wet, and Mayfield piles on layers of Latin percussion, boosted in the mix and swirling atop his multi-tracked rhythm guitar. Together it sounds unmistakably like the prototype for the funk and disco that would rule the airwaves later that decade, and which, through the alchemy of sampling, haunt the hip-hop and techno tracks of contemporary clubland.

Curtis Mayfield didn't make it to the 21st century, but there's every reason to believe that his weird, transcendent music will survive to see the 22nd.

Jody Rosen is a Manhattan writer. He is currently working on a cultural history of the song "White Christmas."