A biography of the middleweight contender who was framed for murder scouts out the pieces of the life the reporters missed. 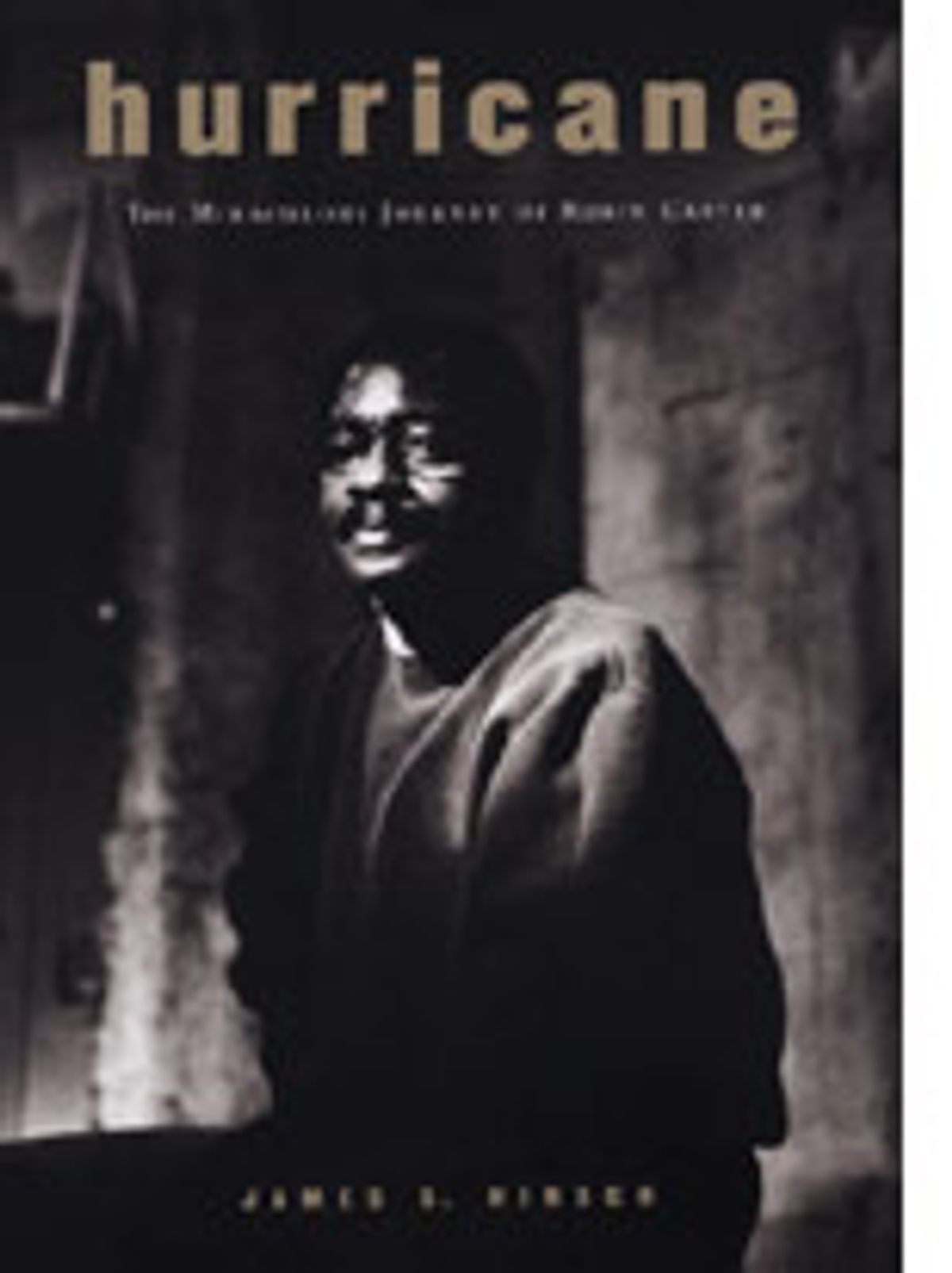 The story of Rubin "Hurricane" Carter has all the makings of a page-turning American saga. There's violence, injustice and courtroom drama; there's sex and celebrities; there's damnation and, of course, redemption. Bob Dylan recognized these ingredients when he wrote his 1975 ballad "Hurricane." The media, too, lapped up the tale: Articles and books were written, TV programs and Web sites created. This month Hurricania begins anew with the release of a movie starring Denzel Washington and James S. Hirsch's biography, "Hurricane: The Miraculous Journey of Rubin Carter."

As a middleweight contender in the 1960s, Carter was the anti-Joe Frazier, the Dennis Rodman of his day. Sporting a shaved head, a Fu Manchu mustache and sharkskin suits, he cruised Paterson, N.J., in his black El Dorado with his name engraved in the headlights. He swilled vodka and womanized. He became a black-power advocate and a gunrunner for Stephen Biko and was put under surveillance by the FBI. Then one summer night in 1966, the New Jersey cops arrested Carter and 19-year-old John Artis and accused them of savagely murdering three whites in a local bar. Both were convicted and sentenced to life in prison.

The case against Carter was thick with racism and thin on evidence. A catwalk of celebrities -- Dyan Cannon, Ellen Burstyn, Stevie Wonder, Burt Reynolds, Johnny Cash -- lent their names and money to his case, for a while. In one memorable scene in the book, a friend of Carter's visits the "Saturday Night Live" set to try to renew Bob Dylan's interest. But Dylan has shed his troubadour-of-social-causes image. Dressed in white patent-leather boots and sunglasses with "BD" inset in rhinestones, Dylan reads a letter from Carter. Then he looks up and points to the TV, where roller skaters are performing. "Do you like roller-skating?" he asks. "Look at the stuff they do." Perplexed, Carter's friend asks Dylan if he plans to write Carter a letter in response. "Tell him I'll be down there in the springtime of my life," Dylan says, and then he begins reciting a passage from the Bible.

Hirsch, a former reporter for the New York Times and the Wall Street Journal, dutifully details the celebrities, the trials and appeals, Carter's prison life and his relationships with members of a commune in Canada, including a scrappy 16-year-old named Lesra Martin who helped win Carter's freedom. But though the book brims with facts, too often the narrative lacks momentum.

Part of the problem is Hirsch's reverence for Carter. The biographer is unwilling or unable to offer much meaningful critical analysis of his subject. And his writing occasionally suffers from clichis about Carter's transformation from bad guy to enlightened self-help thinker. When Carter falls for the leader of the Canadian commune, Hirsch writes: "Initially, Rubin told Lisa that his call was 'strictly business.' But clearly it was more than that. They had met on a higher spiritual plane while discussing human nature and the universe." And later: "But he also realized they had developed a 'learned helplessness,' a dependence on Lisa to survive. That may have been fine for the others, but Carter was a solitary spirit who could never conform to a group or attach his star to another person."

To his credit, Hirsch tries to stretch his book beyond the well-publicized criminal case. He attempts to explore the intimate life of Rubin Carter -- the story that few of the celebrities, lawyers or journalists understood. Apparently one exception among the celebrities was Dylan, who met Carter in Trenton State Prison before writing "Hurricane." "Dylan was not simply probing his innocence or guilt," writes Hirsch. "To Carter, the folksinger was searching for something else entirely, as if he were asking, 'Who are you, man? What are you? Are you what I see?'" Unfortunately, after reading Hirsch's book, readers may still be asking those questions.