Will the new colossus change the Internet for better or worse? 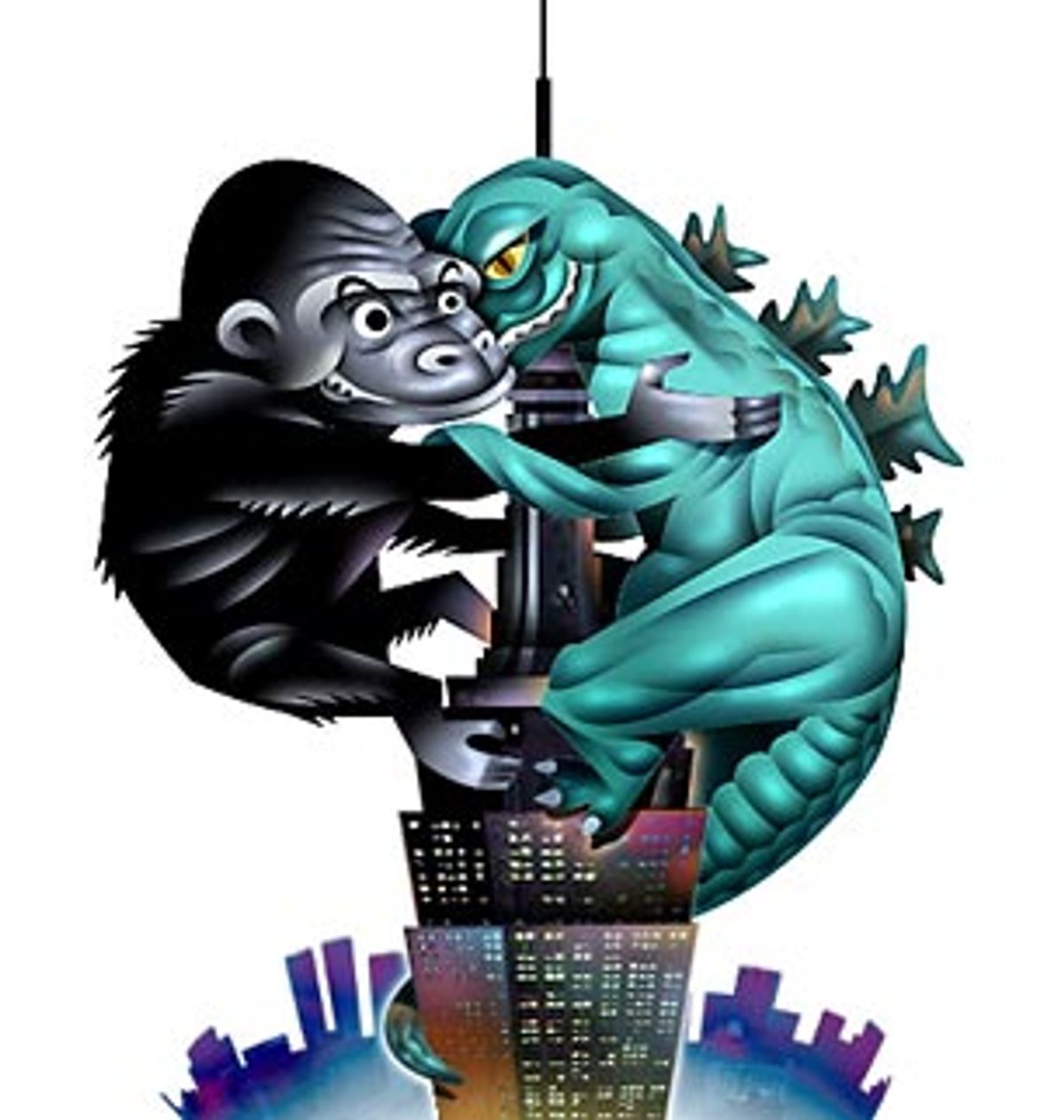 America Online's surprise announcement Monday that it plans to buy media giant Time Warner for $166 billion in stock raised more than a few eyebrows in the Net community.

Old-time Net heads and Web business people quickly focused on the big issues raised by the big merger. Will independent voices still have room to thrive on an Internet increasingly dominated by huge corporations? Will this merger dumb down the Net? How open will this new-old media powerhouse make its content and its network? Will AOL-Time Warner -- or anyone -- figure out how to make broadband work?

We surveyed a number of geeks, new-media savants and technology critics to get their take on the century's biggest mega-merger (at least so far). Here's what they had to say:

It's great for those of us who go back to the earliest days of AOL, back when they were Quantum Link with a service that ran over 300-baud modems for Commodore computers. Who would have thought that they'd be taking over Time Warner?

AOL was always a great company, fast and nimble, even before it was fashionable to be fast and nimble. It followed the PC into the marketplace, invented consumer e-mail and popularized chat and buddy lists. It always followed the user -- it never tried to overlay standards on users that they weren't ready for.

You'd hope to see some new forms of programming. Not entertainment programming per se, but interesting tie-ins between broadcast and PC, where AOL-TV tied into Time Warner content. And of course, there's that dirty old word, "synergy," between AOL's news channel and CNN-- but that's not all that earth-shattering. I don't see the merger as less choice for consumers. After all, this isn't a consolidation of traditional media companies -- this is a click-and-brick story.

What I really hope is that the merger will motivate a broadband revolution. That's speaking in hyperbole, but I'd love to see someone deliver a really great user experience in broadband. No one's done it so far, and if AOL can take its experience to Time Warner's Road Runner, that would be great.

Jamie Love, director of the Consumer Project on Technology

The current system -- you get a pipe from your ISP and you do what you want with content -- is that going to be history? The architecture that's being proposed by the big cable operators would allow them to discriminate in terms of performance ... They could design highly discriminatory platforms, so that [your content] will play differently if you have a business relationship with the owner of the last mile. Whether or not the operators go the common courier route or the common cable route -- "We own the pipe and decide what goes on it" -- is a big deal.

AOL has been a big advocate of open access -- we need to have companies like AOL beating up on the regulators at state and federal level to change things. This merger is partly evidence that AOL thinks it's losing the battle to protect the competitors.

AOL was the biggest proponent of making it a level playing field. They say they still are, but it depends how much you trust Steve Case. We don't; historically he does what benefits him at the time.

The more the Net becomes like TV, the stupider we are going to become; the more TV becomes like the Net, the more intelligent we'll become. It's the mass media-fication/dumbing down of the Net; the bigger these enterprises get and the broader their reach, the less intelligent their content. The Net used to be a grand alternative to television, and it still is. But with the expectations of the mass market, the big center of the curve, clearly AOL's ambition is to be more and more like television.

That doesn't mean that the intelligent stuff is going to go away, but a lot of attention and dollars will be drawn to lowest-common-denominator stuff that AOL is known for. I think the millions of voices are out there, but how many people are going to hear them?

Kara Swisher, author of "aol.com" and staff writer for the Wall Street Journal

You've got an old-line media company that used to be on top of the world being taken over. No matter how much they say this was a merger, AOL is buying the company. Even being "equal" must be a hard thing to take for a company that thought it was the world. Who ever thought this little company from Virginia would be sitting at the table in such a strong position?

The internal corporate politics should be interesting to watch; AOL is very good at corporate intrigue ... But the companies are a lot more alike than you think. Bob Pittman [AOL president and chief operating officer] is a media person; he will be very active. A lot of the people at AOL are New York media people; they aren't from Silicon Valley -- if this were Yahoo it'd be an interesting mix.

I think Steve Case has always been the visionary personality of AOL, and he will be leading the strategic division of the company. He's always wanted to run an old media company; he has always thought of AOL as an old-media company -- that's why he brought in Ted Leonsis [president and CEO of AOL Studios]; they brought in media people early and often.

Tim Berners-Lee, inventor of the Web, director of the World Wide Web Consortium and author of "Weaving the Web"

During the World Wide Web Consortium's five years of existence, there have been many ups and downs in the related industries, along with mergers and disappearances. The need for common standards -- and the threat of fragmentation -- are still as strong as ever. We face fragmentation threats when we lose sight of the Web as a universal space -- one that is device-independent, culturally independent, ability-independent and, of course, vendor-independent.

Jamie Zawinski, an early Netscape employee and leader of the Mozilla project, who quit shortly after the finalization of AOL's buyout of Netscape

It was surprising, especially that it seems to be AOL buying Time Warner, rather than the other way around ... I don't think there's anything terribly surprising about this in the abstract, though; it was only a matter of time before the giant media dinosaurs started sinking serious money into the Net.

This should worry people in the same way and for the same reasons that the sheer size of the media corporations should worry them: This kind of vertical integration makes it harder for the public to hear anything but the corporate party line, since a small number of multinational corporations control the production and distribution of news and entertainment.

This is why the movie studios are prohibited from owning movie theatres. Same exact situation. It's not healthy for society.

That AOL is involved in this deal brings the "what if" scenario I talked about at the end of "Netscape and AOL" a little closer to reality, but this is only one way we can end up in a bad place like that. For example, a merger between Microsoft and Viacom would be troubling in the same way.

It's a coup. Steve Case is now chairman of the largest media company in the world. But the extraordinary thing is [Gerald] Levin. It may turn out good or bad, but the tradition of arrogance that is ascribed to media players of the old guard does not fit with his action. He quite comfortably could have said, "We're not going to get involved in this new medium," but he's decided not to do that. That's pretty cool, in a way, that he's willing to forego that. It's not in the standard behavior pattern of old-line media. You can't imagine [Disney Chairman and CEO Michael] Eisner doing that, for example.

It was interesting to see Steve Case in a tie, and Gerry Levin without. I thought that was kind of funny: the corporate guy trying to look casual, and the Internet guy dressed up. I think they both have come to Jesus.

I think it's a good deal for both of them. It validates strategies that we've been pursuing. @Home's service is all about a broadband, rich-media environment, and our churn rate is below the U.S. death rate. I think AOL is going to see the same loyalty with their broadband customers.

One question is what AOL will do with its control of the pipe. We believe very strongly in an open Internet, letting consumers access the full richness. AOL will make its own decision about that.

Consumers don't want to be beholden to a giant media and Internet dictatorship -- even if it promises to be a benevolent one. It's a sad result of the Clinton administration's weak competition policy -- consolidation leaves people with fewer choices, limited competition and higher prices. Consumer groups are asking the Federal Communications Commission to initiate a rule-making proceeding to require open access to the Net.

If we want long-term diversity of views and diversity of choice, if we want good prices, we need public responsibility rather than just wheeling and dealing.