You cannot imagine the position I've been in since I started writing about sex. 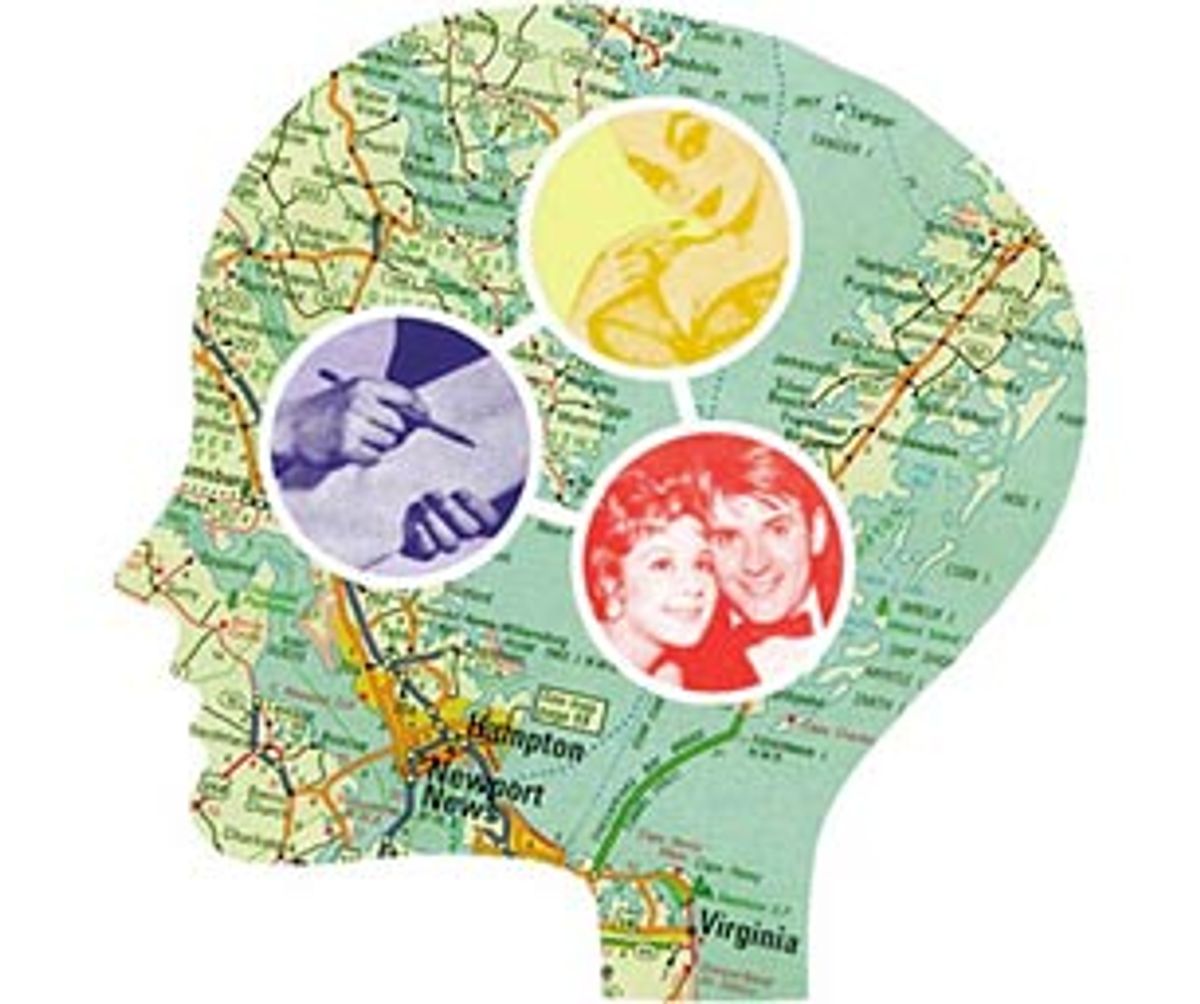 The tension rose inside the car until "Mike" finally said, "I'm wondering if I should kiss you." I wasn't sure either, but I nodded yes. As warmth spread from our mouths down through my body, my brain fired the standard volley of questions: "What does this mean? Are we going to have sex? Starting-a-relationship sex or just-sex sex? If we have just-sex sex, can we stay friends afterwards?" But then another set of concerns was set off: "Mmmm, I like how he kisses. Oh my God, I wonder if he read my kissing column. And if he did, is it making him self-conscious about how he's kissing?"

A kiss, or that kiss, isn't just a kiss. It was a possible referent and now a leading anecdote in an installment of the serial I live in. I knew Mike liked the articles but had no idea how he felt about venturing into my beat. He may have been attracted to the risk; he may have trusted me not to expose him. I know he thought something, because when we first went to bed a week later, he asked to make it "off the record."

It's a relief when a man draws that line or asks, usually half-kidding: "You're not going to write about me, are you?" Answering "No" stops the three-way wrestling match inside my head. The writer me exits the ring, leaving the sexual adventurer me to work it out with the me who wants a boyfriend. The loss of privacy about my sexual past, it turns out, is no big deal compared to the ethical and emotional dilemmas of my sexual present.

Surprisingly, most men seem unfazed by my history that's detailed online. But of course, there are a few exceptions. One fellow who'd read my archives before our first date seemed titillated by it all until the end of the evening, when he asked, "You make that stuff up, right?" I told him I only change names and disguise identities. "You mean," he stammered, "you liked phone sex?" That was the last time I saw him.

Another guy engineered an introduction only because he wanted to receive the attentions of a strapped-on woman. I didn't find out his motivation until later, from someone else, but happily my instincts had led me to decline his invitation for a drink.

"Phil," a writer I dated briefly, encouraged me when I was deciding whether or not to do the column. Authorship, he insisted, protected me from shame and embarrassment about sex disclosures. When you write about it, Phil said, "you own it." Soon after his pep talk, we parted ways, and he surprised me a few months later with his own bid for ownership. He sent me -- and asked my permission to publish -- his version of our fling.

My version first: Phil and I had a good sexual connection, but I knew early on it wasn't a love match. I also knew he really wanted a girlfriend, so I laid down the "just sex" guidelines to be clear and ease my conscience about leading him on. I felt kind of sleazy, like Mac Davis warning him not to get hooked on me, baby, but Phil went along. Soon, however, the sex became not worth the guilt and I started to mind the coldness of the arrangement, so I broke it off.

This little "Rashomon" exercise drove home the elusiveness of "truth" about such a vulnerable subject. We're all the attractive, justified heroes and heroines of our sexual anecdotes, so I didn't mind his painting my indifference as a neurosis. It didn't hurt to be thus "owned" by Phil; and being flattened into a character felt less like a theft than a gift, a glimpse at what others see. Walking in his moccasins eased my conscience about how I use my disguised, but unwitting subjects.

But the ethical quandaries around chronicling the past are simple compared to the psychic contortions of having sex as a sex writer. If your love life is your beat, the temptation is always there to freeze the present into instant past. Stuffing a new encounter into a narrative arc helps you own it -- and protects you from it. But it also smothers it.

I read Lisa Carver's weekly sex diaries on Nerve as both inspiration and cautionary tale. As much as I admire her honesty as a writer, I'm horrified by the way the spotlight drives and consumes her life. ("Sex and the City," on the other hand, leaves all this messy stuff out: Carrie's suitors never acknowledge their fodder status; her girlfriends never object to her portrayals of them, and Carrie never tries something just to generate her columns -- perhaps because they're all one rhetorical question long.)

Carver's 24/7 performance piece of a life scares me because I've also felt the column's push to push the sex envelope. So far the only new thing I've tried just to write about it is phone sex, but even those bodiless encounters had consequences I'm still sorting out.

When I spent the carpal tunnel-risking day on the phone, I was in a relationship, the first one in a few years with long-term potential. My boyfriend at the time, who writes and makes art about sex, had introduced me to a phone dominatrix. I pitched a story about her, and my editor replied, "Why not do phone sex yourself instead?" The boyfriend and I agreed we didn't want to do the assignment with each other so I asked him if he'd mind if I tried it with chat-line strangers. He said to go ahead. It looked like all three wrestlers were going to get their way.

But when the boyfriend and I talked about it afterwards, it became clear that he did mind. ("You came FOUR times?") The writer-me thought, "That's fascinating -- I'll have to write about his jealousy and the issue of whether phone sex is cheating!" Meanwhile the girlfriend-me said, "Leave him out of it."

I'm still not sure why, soon after that, I broke up with someone so compatible, which he and I discussed today when I called to ask if I could use this anecdote. I may well have been choosing the hunting and gathering of material over the monogamous long-term relationship I'm pretty sure I want.

A few weeks ago, at 3 a.m. in a dark, after-hours club, I came the closest yet to a seamless merge of sex and sex writing. I was nestled on a couch with a 21-year-old who looked like Antonio Banderas. (The little devil and the little angel on my shoulders kept exchanging these two pieces of information: "21!" "Looks like Antonio Banderas!")

He told me he was trying to figure out his status with a girl from his dorm ("21. Girlfriend. DORM, you old lech." "But, Antonio!"). I asked him, "Well, are you sleeping with her?" He smiled shyly and said, "No, I'm a virgin." I marveled at that, "But you're so attractive," to which he replied eagerly, "You really think so?" I reassured him vigorously. Then I said, "I write a sex column. Could I interview you about being a virgin?" He said, "Oh yeah, I'm really open, I'll tell anyone anything!"

He went on to explain how he really wanted to have sex but wasn't sure who the first time should be with. I suggested, nobly, that it should probably be with a girl he loved and trusted. He countered that maybe someone more experienced should show him the ropes.

I took a deep breath ("21!" "Antonio!" "Virgin!") and spoke slowly. "You know, of course, that the best column would be for me to show you the ropes and write about that." He answered, "That crossed my mind, too." The writer-adventurer tag team exchanged high fives in my head -- the boyfriend seeker had long since retired for the night.

But in the next moment I realized that I'd never go through with it, even though it would solve a moral dilemma to have the sex that we both agreed was column fodder. I'm not sure exactly how I knew the story had to end here, but part of it was that I could never discuss all the weird meta-levels of the situation with this boy. It would just be too lonesome to take full ownership before we even started.