Put your cat clothes on 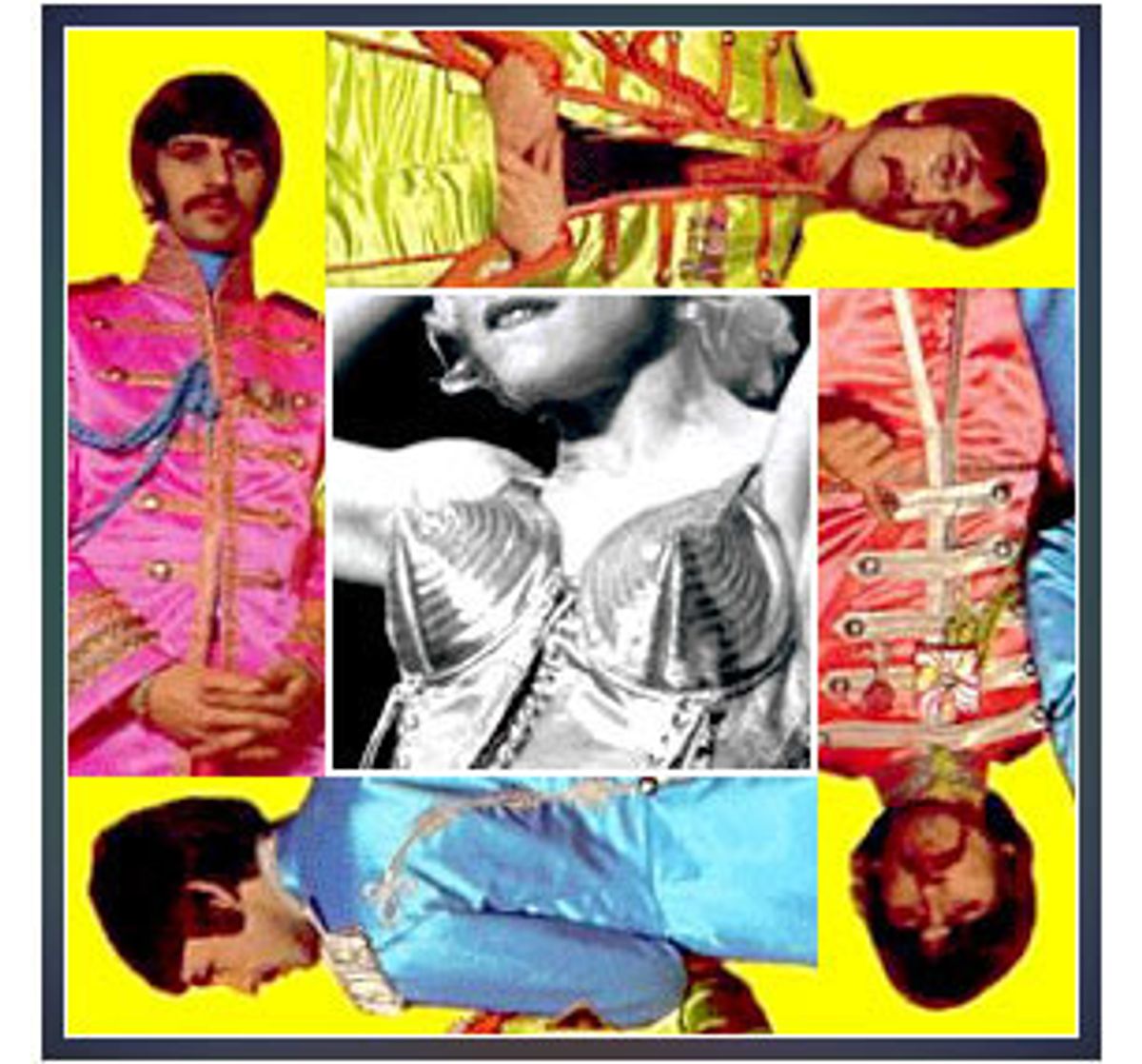 By the time we've gone 'round and 'round the idea of whether any aspect of rock 'n' roll belongs in a museum, another few issues of Rolling Stone have come and gone, another rasher of CDs has appeared on the "new this week" rack and another group of executives has sprung to action in the hopes of revolutionizing the music industry with MP3s. Time marches on, and so does rock 'n' roll, changing either very rapidly or with surprisingly glacial speed, depending on your outlook.

Yet a big part of what foments that change is not just how rock 'n' roll is played, but how it's presented, and for that reason alone, the superbly put-together "Rock Style" at the Metropolitan Museum of Art in New York through March 19 needs to exist.

When I think of the musicians I've loved best over the years -- Elvis, the Beatles, Jimi Hendrix, the Who and on and on -- it's always, of course, the sound that comes first. But oh, the look of them! How is it that creatures who sound so good can look so heavenly as well? Having the money to dress a certain way, and having the right people around to advise, would partially account for it. But I still believe that it has more to do with the transformative power of rock 'n' roll -- its ability to work magic both on the people who make it and on the people who listen to it. By making them feel different, it also makes them look different, as if by a spell.

If the essence of rock comes from inside, do the clothes have anything to do with it at all? That's a question that would be asked only by someone who doesn't understand the talismanic quality of certain garments -- and we're talking about something as simple as a flannel shirt. "Rock Style" works not only because it's a cultural record of the way rock stars have chosen to present themselves over the years, but because somehow just about every piece of clothing chosen, even when it's uninhabited, captures some inexplicable something about the wearer. Looking at Elvis' Nudie-designed gold tux or the Beatles' trim, velvet-collared wool suits all lined up in a row, you can't help feeling that a little of the magic has rubbed off along the seams.

It's crucial to remember that for all of the pop smarts, this is a Met show: The placard for a braid-trimmed military-style jacket worn by Keith Moon reads, "The Who were notorious for destroying their instruments as part of their show." That may be a highly interesting fact for the cloistered Manhattanites who might have wandered into the show by mistake while taking a break from indexing their collections of pre-Colombian artifacts, but it's no news to the rest of us. (And if you think that's unfair you should have seen one 50-ish looking woman turning to her rumpled-corduroy husband in puzzlement to ask, "David Bowie. Does that name mean anything to you?")

But for a show that's designed to appeal to rock know-it-alls and willful know-nothings, "Rock Style" has plenty of intelligence. This was the last show to be spearheaded by Richard Martin, the director of the Met's Costume Institute, who died in November (the show is dedicated to him). Martin always took an exceptionally smart approach to clothing: He was keenly aware of its sense of function and its sociological importance, but he never underestimated the sense of wonder it could evoke, either.

Guided by that sensibility, "Rock Style" takes itself just seriously enough. Sure, Madonna's satin Jean-Paul Gaultier damn-the-torpedoes bustier is supposed to mean something in the language of modern sexual communication, while Sly Stone's skin-tight rhinestone-studded jumpsuit (another creation by "Nudie" Cohn, the Hollywood tailor who fashioned fabulously well-made and fanciful outfits for performers like Elvis and Hank Williams) speaks only jive. But both get the point across beautifully, and the show makes no attempt to elevate one's significance over the other.

In the world of rock 'n' roll clothes, what's significant? I guess you could say it's anything that conjures a memory of some piece of music that took you hostage at one time or another. Certainly that was the sense I got from seeing the Beatles' Sgt. Pepper uniforms, in their ribbon-candy colors, lined up in a row. (The placard for these notes that they came from an ordinary costume shop, and had actually been rented previously by mere mortals.)

But the clothes that stand out most vividly in "Rock Style" are the ones that simply speak loudly, in one way or another, of the people who wore them. Nobody but Donovan would have latched onto that Victorian-era wedding cape from the Balkans, an elaborately embroidered black-velvet number just right for a sensitive evening of balladeering or calling up a windstorm in a forest clearing, whatever you're up for. Janis Joplin's mode of turning neediness into art has never done that much for me, but I find it mysteriously touching to learn that she herself worked the beaded flowers that adorn one of her mini-dresses. They seem to represent not just hippie do-it-yourselfdom, but also a way of retreating into a task that requires a certain amount of restraint and discipline, rather than unguarded emotional outpouring -- but one that's nonetheless fueled by the desire to create something beautiful.

"Rock Style" has its share of items that simply had to be included, even if they're butt-ugly. Mick Jagger's dumb Ossie Clark jumpsuits might make some people's hearts go pit-a-pat, but I much prefer the trimly tailored jacket worn by the younger Jagger circa 1967. Its fish-tail rainbows of stripes and masterful workmanship represent the perfect coupling of masculine/feminine beauty: It's as gorgeous and paradoxical as Jagger himself was at the time. Keith Richards, the real style-setter of the Stones in terms of putting himself together with genuine outlandishness coupled with a healthy regard for raw sex, is disappointingly underrepresented: A ripped T-shirt and fox-trimmed leather jacket from the late '70s capture his scruffiness well enough, but barely scratch the surface of his corresponding princeliness.

But no matter. Most of "Rock Style" speaks just the right language. The multicolor-striped wool twill jacket that Hendrix wore for a 1967 performance on Britain's "Top of the Pops" radiates his elegance and bearing and sheer beauty, regardless of the fact that it's pinned on a lifeless form. And how else could we know that the velvet-collared suits worn by the young Beatles, pretty humble-looking outfits for a group of boys getting ready to take the world by storm, were not solid black wool but a subtle black-and-red twill? When you look closely, you realize that little bit of red is just enough to give them a quiet iridescence. There's magic worked into that warp and weft, all right. But there's not a loom in the world that could have put it there.