In the latest p.c. backlash, students named Little Hitler and the Beetle don spandex and pummel each other with sleds. 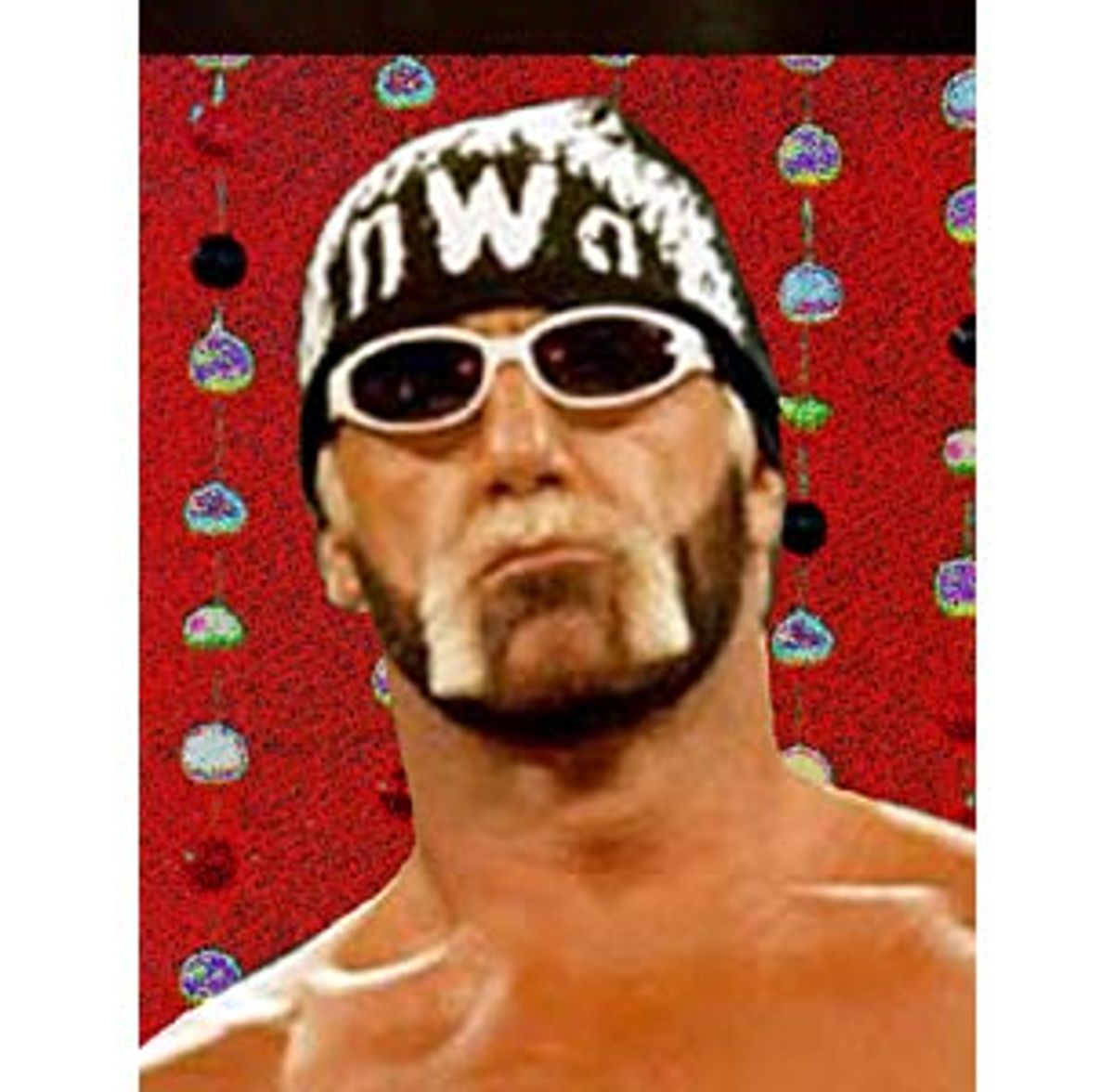 In a lounge on the second floor of a Hampshire College dormitory, two students are beating the crap out of each other. At least they're pretending to. This is a grudge match between Hank Newcastle and the Beetle, sponsored by the World Wrestling Collective. The boys lunge at each other as someone pounds on a saucepan (the "bell" beginning the match). Hank quickly pins the Beetle's shoulders to the floor.

It's an unconvincing pin. Hank, baby-faced and balding, stands about 5 feet tall. He wrestles as "Head of the Executive Committee," under the awe-inspiring motto "Blood, Sweat and Paperwork." Not that his slightly larger opponent looks stronger; both contenders are a little dumpy. Resplendent in baggy, black sweats and a mask with pipe-cleaner antennae, the Beetle is the WWC underdog. Out of half a dozen matches, his only victory was against Little Hitler, who never wins.

The pin happens 30 seconds into the match, far too soon to declare a winner. The Beetle wriggles out. He grabs Hank's nose and slaps him on the head, poking him in the eyes for good measure. Hank reacts like George Foreman has socked him. The Beetle grabs a plastic sled that happens to be leaned up against the wall. He hits Hank over the head with it. The sled dents. "That steel sled is brutal!" shouts announcer Kazu Ohashi. Travis Dale, floating in the background, is a model referee: He never wrests the foreign objects from the contenders. The boys flail at each other for a while, visibly tired. Appearing to hit someone can be just as tiring as crippling them; restraint takes effort. Hank bops the Beetle with a saucepan and the Beetle goes down. "This might be it, folks!" Kazu intones.

It isn't. A good ending requires foul play. The Beetle's arch enemies -- Dick Turpis, Fatt Devn the Nape Fucker and Wrasslin' Janet Reno -- are there to oblige. Reno (a tall, mustached man in a chintz dress) flashes the Beetle, who collapses. The bad guys pull the limp Hank over the Beetle's body -- the winning pin! -- and exit, beating up the ref on their way. As the camera fades out, the Beetle, Hank, and Travis lie scattered on the floor, giggling. A concerned voice off-screen asks, "Are you OK?"

Clearly, pro wrestling in the hands of the World Wrestling Collective is not the pro wrestling of the World Wrestling Federation. Sometimes an homage, but more often a parody, the WWC sprinkles its fights liberally with absurdity. Any sacred cow of professional wrestling is ripe for hamburger. In 1998, the WWC took on American nationalism, long a pro wrestling staple. The WWC's blond, blue-eyed American Poster Boy, sporting a T-shirt from Henry Kissinger's law firm, rushed into his first match shouting, "Drink Coke! Vote Republican!" The spectators, some of them inveterate flag-burners, chanted "U-S-A! U-S-A!"

The WWC pokes fun at the feeble moralizing that pervaded the WWF in its infancy. The Beetle mugs at the camera and gruffly urges, "Brush your teeth, kids." One wrestler recorded a thoughtful public service announcement: "Hi, folks. My name is Mark. I play a wrestler named Little Hitler. [Pause.] Don't be Little Hitler, kids."

The WWC is not alone. Boston University has a pro wrestling group, as does Penn State. (Penn State holds matches, while B.U. students gather to watch pay-per-view events.) Similar organizations are rumored to exist at universities from Cambridge, Mass., to Santa Cruz, Calif. Not that a college's promotional literature will mention its pro wrestling organization. Most pro wrestling groups keep their distance from student activities offices.

There are a few reasons for this low profile. Liability is an issue. Boston University's club was told it would not get school money if members actually wrestled. According to club president Evan Scheck, "The student activities board said, 'We can't support a club that's going to bring paramedics in once a week and cart a kid away.'"

Penn State's Nittany Wrestling Federation assuaged administrators' concerns by obtaining a promoter's license and having wrestlers sign liability waivers. Its wrestlers, who are muscle-bound jocks compared to the WWC's pudgy novices, train with the pros. WWF wrestler Samu has participated in Nittany events. Founder Alex Abrahantes touts the NWF as "the only legitimate wrestling promotion operating out of a college in the United States."

Liability aside, a pro wrestling club isn't likely to be the highlight of a college tour. Many people think pro wrestling is for kids and rednecks and not an appropriate fixture at high-class institutions that traditionally boast rowing and lacrosse teams. According to Sheck, certain B.U. students "make snotty remarks" when the club is out publicizing events. "I'm sure there are people who can't believe that the day came to pass that there's a pro wrestling club at B.U.," he says.

How does pro wrestling appeal to enough educated young men to spawn college clubs nationwide, anyway? The wrestlers insist, somewhat disingenuously, that the appeal is in the story lines. Episodes of the World Wrestling Federation's Smackdown have become as baroque as any soap opera plot, snarled with family disputes, workplace grievances and adultery.

Penn State's Abrahantes calls this a calculated move by professional wrestling franchises to appeal to the lucrative 18-to-49-year-old male demographic. A key part of the "maturing" of pro wrestling has been abandoning the pretense that wrestling is real. "By letting people recognize that it's entertainment and not a legitimate sport," says Abrahantes, pro wrestling can attract people who feel more comfortable if they aren't asked to believe that men with names like Hulk Hogan actually solve their problems by hitting each other with chairs on pay-per-view. "The era of insulting the fans is over," says Abrahantes.

College-age admirers say they are interested in the difficulty and intricacy of wrestling moves. "You have to work with another person to create a work of art," explains Abrahantes. "It's like ballet," adds the WWC's Travis Dale. (Slightly embarrassed by the sound of that, he makes a joke of it: "Plii? Powerbomb. Plii? Powerbomb.")

Why not watch ballet, then? Or follow "Star Trek," if you want a male-oriented soap opera?

Benni Pierce, who wrestles with the WWC as Elvis, cites Hampshire's status as a bastion of p.c. behavior. "On a campus such as Hampshire, where you sort of lose your sexual identity, the WWC serves to reassert manhood," he says. "Where else could you 'punch' somebody? I want to believe that when I fight in the WWC I'm actually being manly." He sounds more agitated as he continues. "If you're overly masculine, the feminists attack you. If you're too effeminate, you're not attractive."

Duran Goodyear, aka the American Poster Boy, agrees. "It's a little testosterone on a highly estrogen campus," he says. The WWC has proven to be relatively estrogen-repellent. Women attend events, but otherwise the WWC is the closest thing Hampshire has to an all-male organization. Despite the Gorgeous Ladies of Wrestling and other female wrestling phenomena, no woman has taken on a WWC wrestler for a full match. Ringside announcer Bren Tamilio worries that women who want to participate feel pressured to conform to the scantily-clad standard that pro wrestling sets forth. He doesn't want T&A to become part of the WWC. "That's the Hampshire in me," he says.

The WWC does have a gay character. Clive Cockburn is played by a straight man and milked for all the limp-wristed bending-over-in-the-shower jokes he's worth. The lack of comment from Hampshire's gay and lesbian organization has been surprising. Truthfully, though, the WWC flies below the radar of many folks at Hampshire. Most people think the organization is too idiotic to warrant any attention.

Some students did protest the WWC's funding. "I felt that we weren't funding things like a series of courses taught by students," says Kyra Minihane, who participated in the allocation decisions. "And we were giving $1,500 to this Spandex Collective. This was during all the school violence [in Littleton, Colo.]. I thought it was inappropriate." Minihane worries that Hampshire is setting a bad example by approving funding for the WWC. "It shows children that this is an appropriate way of dealing with problems," Minihane says, although events are attended almost exclusively by college students. Above all, she worries that "in popular culture, watching people get beat up is fun, rather than watching some 'Saturday Night Live' sketch."

Minihane would rather see more funding go to Hampshire's improv troupe, which she calls "good clean fun." The belief that violence is an inextricable part of masculinity is unpopular at feminist, pacifist Hampshire. Still, a few WWC wrestlers defend the idea. "Men are men," says WCC member Goodyear. "We happen to be predatory by nature. At Hampshire, a lot of physicality is repressed."

The issue at stake is not unique to Hampshire. It's a question of who decides which beliefs and ideas are funded by the university, in the form of student organizations. Some defend the WWC as a vital free-speech outlet. "At Hampshire, norms of political correctness are pushed to such an extreme that Hampshire students sometimes feel the need to break out of them," asserts WWC participant Gareth Edel.

Not that they always use their soapbox to make a clear point. The ironic enthusiasm with which the American Poster Boy proclaimed, "Let's tell Germany what America's all about!" before the audience dog-piled on Little Hitler was humorous, but what exactly did it mean when his opponent screamed, "Ein Volk! Ein reich! Ein Deutschland!" throughout the match?

But then, his is an exercise in nostalgia for boys who spent their childhoods cheering Hulk Hogan. They'd rather you sat back and forgot about meaning for a while. "So much stuff goes on at Hampshire that's highbrow and political and intellectual," complains Hank Newcastle. "This is the one thing on campus that's wacky fun."

Gillian Andrews is a recent graduate of Hampshire College.