In a new novel and a new collection, the Florida author proves that he's as outrageous in fiction as he is out there in fact. 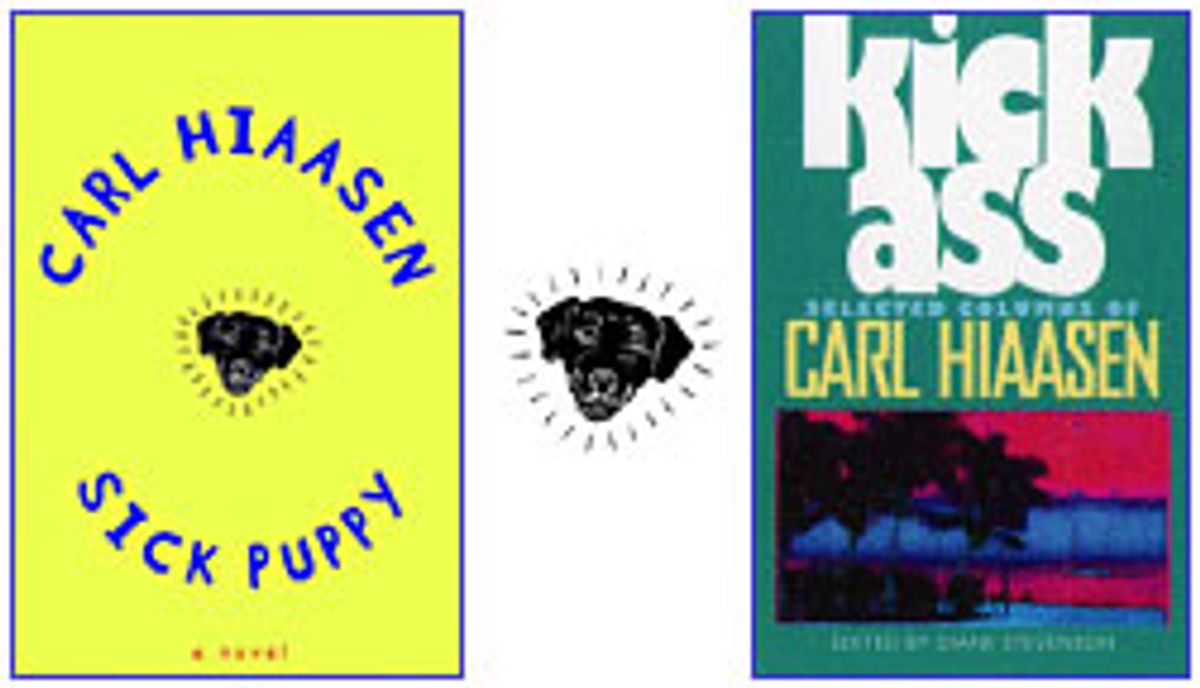 The forces of avenging good and outrageous, gluttonous evil square off again in Carl Hiaasen's mordantly funny seventh novel, "Sick Puppy." This preposterous political farce takes place in the swampy wonderland of south Florida, which has provided a vivid backdrop for nearly all of the author's hyperbolic adventures; since 1985, it's also been the stomping grounds he's covered as a columnist and reporter for the Miami Herald. This time, Hiaasen's hero is Twilly Spree, heir to a vast real estate fortune and self-made eco-terrorist, who spends most of his time trolling the highways and byways of his state in search of insensitive citizens who commit crimes against the environment.

These sins may be profound, or they may be piggy and small; in either case, action is required. Twilly's uncle, a banker who loaned a rock-mining company $14 million to blast craters in the Amazon River basin, is guilty of a larger offense, so Twilly blows up one of his branch banks -- on the weekend, mind you, when no one will be around to get hurt. On the other hand, when Twilly first spies Palmer Stoat, the high-powered lobbyist and wheeler-dealer who shares top billing in the novel, the man is merely emptying the trash from his fast-food lunch onto the turnpike. Twilly responds by dumping the entire contents of a garbage truck into Palmer's Beemer convertible.

Littering turns out to be a minor entry on Palmer's extensive rap sheet. His major transgression is the orchestration of all the under-the-table payoffs, bribes and kickbacks it takes to complete the desecration of a pristine tract of wilderness on the gulf, near the mouth of the Suwannee River, known as Shearwater Island. As Hiaasen has demonstrated in masterly fashion in his previous novels, political corruption in south Florida has a character all its own. Perhaps it's the proximity of the Everglades, with its oversized lizards, but there's nothing self-effacing about these crooks.

Consider, for example, dope-smuggler-turned-land-developer Robert Clapley. The Shearwater Island project is Clapley's brainchild, but during his off hours he chases another dream. As the only brother to four older sisters, he developed a childhood fascination with Barbie dolls, and as his fortunes have grown, so have his obsessions. Now he shares his Palm Beach condo with Katya and Tish, two Slavic imigris who are in the process of being transformed, with the aid of some gifted plastic surgeons, into identical twins: Barbie One and Barbie Two.

But it isn't just the bad dogs in Hiaasen's kennel who live up to the book's title. (Actually, the sanest member of the cast is Boodle, aka McGuinn, a gigantic but extremely hospitable black Labrador.) Not only is Twilly prone to uncontrollable fits of rage, but at the beginning of the story he is also incapable of dreaming. Perhaps the biggest sicko of all, though, is a six-foot-six, one-eyed hermit who dresses in a kilt made out of a checkered racing flag, wears his silvery beard in a pair of intricately braided tendrils tied off with a vulture's beak and refers to himself simply as Skink. He is really Clinton Tyree, the legendary former governor who made his first appearance in Hiaasen's 1987 novel, "Double Whammy." Though he doesn't make his entrance until the book's second half, Skink quickly claims his place as the story's dominant personality. And as Twilly's sidekick in the battle against the established forces of greed, he helps catapult the action into the giddy stratosphere of political satire.

What appears in Hiaasen's fiction to be political farce, though, turns out to be well-grounded in political fact. The difference between the improbable events Hiaasen depicts in his novels and the real-life issues he discusses in "Kick Ass" is only a matter of degree. As you read this collection of lively and well-reported pieces written since 1985 for the Miami Herald, it quickly becomes evident that the author has been able to find most of the raw material for his fiction right in his own backyard.

Illuminated by all the wit and keen descriptive powers of his fiction, these columns -- which deal with subjects ranging from the sacrificial preferences of Afro-Cubans in northwest Dade County to the epidemic of crime against tourists in Miami -- not only demonstrate the depth and diversity of Hiaasen's talents as a journalist but also establish him, in the words of the book's editor, Diane Stevenson, as "an advocate for realistic growth and decent government in Florida." Taken together with his novels, they create a colorful profile of place and a one-of-a-kind literary achievement.

A former film critic for the Washington Post, Hal Hinson reviews books and movies from his home in West Hollywood.